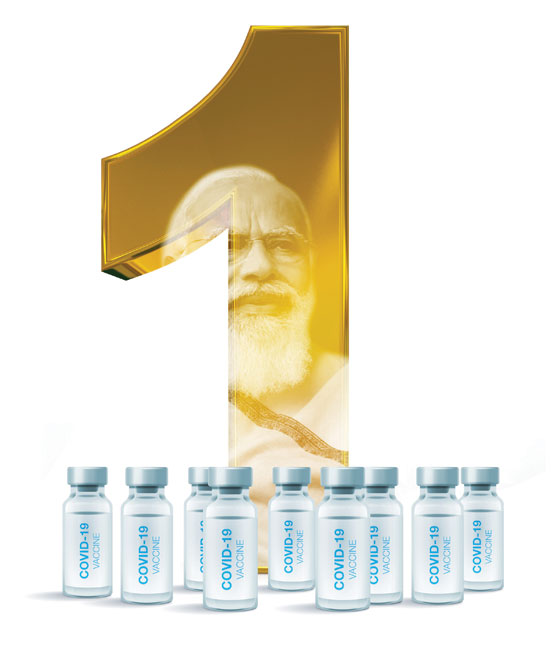 
AROUND NEW YEAR’S eve, as partygoers weighed the risks of raising a cheer amid rising cases of Omicron, officials at the health ministry were keenly studying the variant’s genetic makeup and recovery curves of South African patients to try and assess what the pandemic’s new turn means for India and how stringent a response was warranted at a time when the ravages of the second wave are just about receding.

The officials and experts, drawn from Government and outside, were all too aware of how the Delta wave left the healthcare system gasping as also the havoc wreaked by lockdowns, particularly on the livelihoods of those on the margins who found themselves at the receiving end of shutdowns. The job of balancing risks posed by a new, fast-spreading Covid variant, and protecting a nascent economic recovery, was arduous.

The emerging science on Omicron along with clinical data from countries that bore the initial brunt of the variant provided a glimmer of hope. While Omicron was quite successful in evading immune response and was highly transmissible,.it lost out significantly in its ability to fasten onto protein receptors in human cells. Put simply, Omicron’s virulence in terms of causing severe infection in the lungs was limited. It was much less potent than Delta and offered a closer comparison with earlier avatars of Sars-Cov-2 that circulated the globe in 2020.

The initial versions did take a severe toll on human hosts they invaded, but there were crucial differences when Omicron arrived. By December 2021, India’s vaccine coverage had achieved important landmarks, including delivery of the billionth shot on October 21st. In early 2020, as the coronavirus shook the world, medical professionals struggled to frame a protocol to treat the infection, with many falling victim themselves. Autopsies of the dead revealed severe scarring in the lungs, alarming public health experts, and led to governments imposing stringent lockdowns to halt the virus on its tracks.

The infection curve in South Africa, where vaccination has been slow (first dose coverage remains less than 35 per cent of the population), rose and ebbed in a little over a month, raising expectations that while Omicron could cause many cases, it could be more a T20 phenomenon. Further studies revealed that Covishield and Covaxin, the vaccines widely in use in India, offer strong immunity against severe disease even against Omicron. Apart from antibodies, T cells, produced either due to previous infection or vaccines, were able to develop effective memory pools to detect and counter Covid infection. 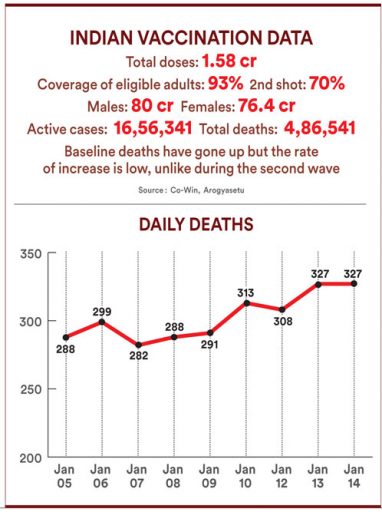 The emerging data helped the Government to take a call on how to respond to the Omicron threat in a calibrated manner without opting for drastic lockdowns which could cause deep distress in the economy and in turn dislocate millions of lives. Morning discussions held by Health Minister Mansukh Mandaviya with the Government’s top experts like NITI Aayog member Dr VK Paul, Indian Council of Medical Research (ICMR) Director General Dr Balram Bhargava and AIIMS Director Dr Randeep Guleria led to an assessment that while there was a need to slow down Omicron’s spread to ensure a deluge of cases did not swamp healthcare, the variant was not the threat Delta posed when it swooped down on a largely unvaccinated population. As even a small percentage of serious patients would mean a high absolute number in case infections rose steeply, measures to contain transmission were recommended along with a renewed push for faster vaccination.

Reviews held by Prime Minister Narendra Modi and the health ministry’s deliberations resulted in the Government resolving another dilemma about booster (or third) doses and vaccinations for those under 18 years of age. As it became clear that vaccinations, even boosters, did not much enhance protection against mild Omicron infections, the Government decided to prioritise additional shots and those to be made newly eligible for vaccination. The third dose, labelled as a ‘precaution’ dose with some deliberation, was to be prescribed for persons above 60 who might have weakened immunity. This would boost protection against severe disease among the elderly without diluting the focus on covering adults with full or double-dose vaccination.

Concern over Omicron’s higher transmissibility and worries about schools reopening led to vaccination being opened for the 15-17 age group. The Government had delayed a decision in view of data that infections among the under-18 were minimal and, more importantly, national sero surveys revealing that youngsters have roughly the same level of antibodies as adults even though they were not vaccinated. This was strong evidence of the spread of the infection in the general population during and after the second wave and of the widespread immunity it generated. But with Omicron proving to be highly transmissible, there was concern that this mobile population could bring the disease home to older people even as they remained either asymptomatic or mildly ill themselves.

The yearend celebrations did result in a rise in cases. But even as the cases doubled and tripled, the all-India numbers recording an increase of over 1,000 per cent in the first fortnight of January, the distress caused by the new infections was limited. Deaths remained low, India’s case fatality ratio showing only a slight incline (1.31 as of January 16th) and being well below that of many other countries. Similarly, those in need of ventilator support and ICU beds accounted for about 2 per cent of the active caseload in most cities. A slightly greater number needed oxygen support and were graded as mild or moderate cases. Importantly, a majority of those who succumbed to the infection were unvaccinated, proving the importance of vaccine protection as Omicron was just as merciless on those with compromised immunity. Conversely, hybrid immunity, or protection offered by antibodies resulting from both vaccination and incidence of disease, seemed strong and effective.

Early signs of cases falling in some cities and the nationwide increase in daily confirmed cases in the range of 0.40 per cent to 0.64 per cent (January 8th-18th, according to Aarogya Setu data), offer important pointers. So does the progress of active cases—which rose sharply in the same period—initially increasing by 25 per cent and then moderating to 4.85 per cent. There is no unanimity on when daily cases will plateau, with some experts speculating on five lakh cases a day and others saying it could go higher. But the more hopeful message as India completes one year of its vaccine rollout is that the shots are saving lives and blunting the impact of Omicron. The possibility of the third wave declining by mid-February is being discussed and is leading to more encouraging estimates that the impact on the economy will be modest. Indeed, pre-Budget interactions between the finance ministry and business reveal preparedness on the part of industry to ride out the current wave of infections. There is a pragmatic view that there is a need to make adjustments and carry on even as future waves of Covid cannot be ruled out. So, while restrictions like weekend and night curfews and closure of eateries and malls have led to setbacks to service-oriented sectors, the impact could be more moderate. As the prime minister underlined in a recent discussion with chief ministers, there was a need to be alert but local containment rather than lockdowns were the better option.

In contrast to May-June 2021, when blame games on oxygen and vaccine supply were raging, there is an absence of political sparring as India marked one year of the vaccine programme. The reasons are not far to seek. As India crosses 1.6 crore doses, and there is no shortfall in vaccine supplies, there is nothing to squabble over. With studies showing that both Covishield and Covaxin work satisfactorily as boosters or third doses, the clamour among some experts that there should be a ‘mix and match’ of vaccines is dying down. The Government, too, is taking a hard look at whether it needs to place orders for vaccines due for market release soon, as there may not be much need for them. With vaccination for teenagers proceeding smoothly, the health ministry is also drawing on the World Health Organization’s view that boosters should be administered to those seen as more vulnerable to justify its third dose policy for the elderly. The argument is further buttressed by evidence from countries that have delivered boosters but still face rising cases due to Omicron. The problem in such countries, Government experts say, is that many have a high number of ‘dissenting’ adults who do not wish to be vaccinated. Despite its early start of vaccination, there are more than 80 million unvaccinated people in the US. As 93 per cent first-dose coverage of adults shows, vaccine hesitancy is not widespread in India and initiatives like door-to-door vaccinations taken up in November when the rate of jabs delivered was flagging have worked. As a result the ‘at risk’ 18-plus population has some protection even as full vaccination of eligible adults crosses 70 per cent.

Could India be at a tipping point in its fight against the Covid pandemic? The results of the vaccination drive are reason for optimism while emerging evidence of research related to Omicron holds out the promise that the virus may be losing its sting. A verdict on whether the pandemic could move to an endemic stage may be premature but the possibility is being actively considered. The US’ top infectious disease expert, Dr Anthony Fauci, has said it is an open question whether Omicron is the “live virus vaccination” everyone has been hoping for. It would all depend on whether other variants with the capacity to evade immunity emerge and if they are capable of causing severe disease. It does seem evident, given the high positivity in several states and the nation as a whole (14.4 per cent as of January 18th), that infections, now largely driven by Omicron, have spread widely. The ICMR directive to test only contacts with co-morbidities points to the assessment that little is to be achieved by tracking cases that are mild or asymptomatic and that instead home isolation may be prescribed for families with sick members. It will be safe to conclude that the current wave will provide its own Omicron-induced immunity as it begins to recede and this might set the stage for a milder form of the virus circulating in the general population and taking the disease into an endemic stage.

While medical opinion remains cautious about such outcomes, pointing to the emergence of Delta and even Omicron, the expanding vaccine coverage and the initiation of the third dose could prepare India for future variants. Omicron has an unusual number of spike protein mutations but these are concentrated in three areas of the virus body and are unable to efficiently attach themselves to cells in the lower respiratory tract and lungs. It is the fifth major strain to evolve since Covid, helped by China’s delay in revealing the outbreak, burst with ferocious virulence on the world. In the last two years, billions of dollars have gone into studying the virus and now more than nine billion vaccine shots have been delivered globally, putting the pathogen under considerable evolutionary pressure. Covid may never become a ‘common’ flu, but India’s success with vaccination can protect it from a harsh re-run of the Delta wave.