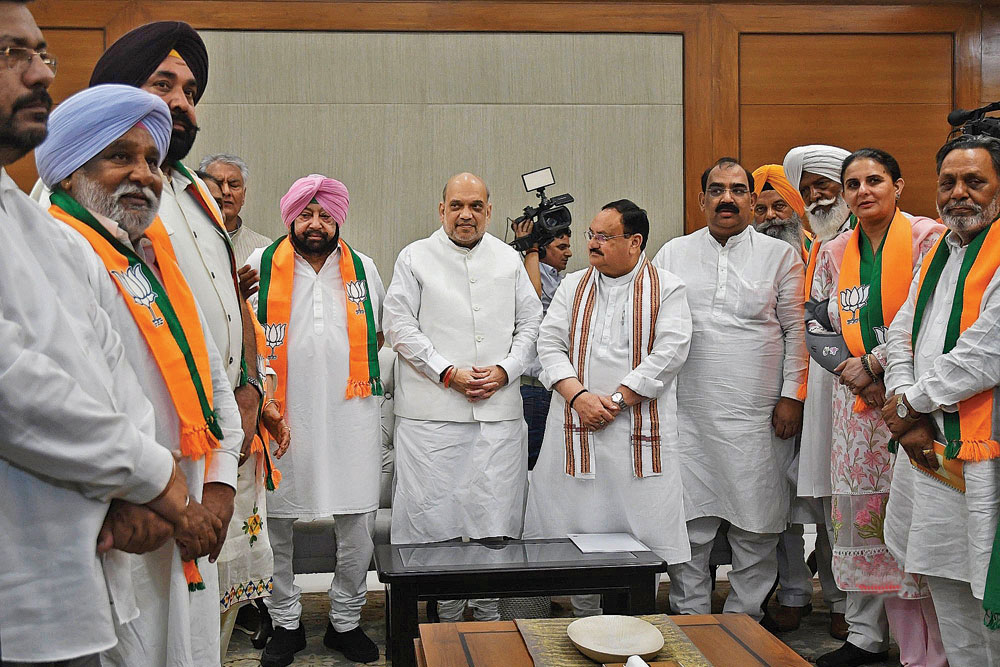 
IF THIS ISN’T NATURAL progression, then nothing is. Congress leader ‘Captain’ Amarinder Singh’s entry into the Bharatiya Janata Party (BJP) this week through the merger of his party, the Punjab Lok Congress, with the ruling party at the Centre is the denouement of a process set in motion and steered by none other than Union Home Minister Amit Shah more than five years ago. Talks had begun with full vigour before the 2017 state Assembly election that won Singh the post of chief minister of Punjab for the second time.

But the parleys didn’t reach a meaningful conclusion because of the political expedients of the time. First, BJP was in no mood to alienate the Shiromani Akali Dal (SAD), its ally which was then considered a bulwark against secessionist tendencies and forces in the border state scarred by years of insurgency and the involvement of Pakistan’s external spy network. Prime Minister Narendra Modi himself held at least some SAD leaders, especially its paterfamilias Parkash Singh Badal, in high esteem. Both at a personal level and on the political front, the prime minister wouldn’t have condoned steps that would suggest any incongruence in dealing with Sikh religious institutions and a lack of respect for their pantheon of gurus. Sikh gurus and their teachings are close to the prime minister’s heart.

The talks back then didn’t result in any tangible political realignment because accommodating both Singh and the SAD leadership in the state coalition began to appear an insurmountable task. BJP, for its part, preferred warm ties with SAD until the farmers’ protests (2020-21) created fissures from the start, leading to the latter’s exit from the National Democratic Alliance (NDA) in September 2020.

Exactly a year later, opportunity struck again for Singh to resume talks with BJP following his dramatic and humiliating exit from the chief minister’s post. The shoddy way the transition was handled by Congress’ Nehru-Gandhi family in one of its last strongholds, as Open had maintained then, was proof of amateurism. It also revealed the propensity on the part of Priyanka and Rahul Gandhi to be blasé about the dangers of giving carte blanche to anyone who challenged a regional heavyweight, irrespective of their political maturity. True, Singh’s own style of working, characterised by an overdependence on bureaucracy, may have contributed to his decline and fall within Congress, but he wasn’t given the fair hearing a veteran deserved. Again, some of his fervent pleas about the internal security of the country and why the guardianship of the state bordering Pakistan should not go to clumsy people and motormouths fell on deaf ears. The man who was projected as his rival, Navjot Singh Sidhu, seemed to love each second of the bitter spat with Singh and touched new lows in rival-baiting—all of this was either connived in or secretly encouraged by the young brigade at Congress HQ. That wasn’t a turf for Singh, an officer and a gentleman, regardless of his shortcomings and inaccessibility to ministerial colleagues. Incidentally, Singh had opposed Sidhu’s entry to the Congress fold ahead of the 2017 polls. Singh later eased him out of his local bodies’ portfolio in a reshuffle after the Lok Sabha polls in 2019, prompting the cricketer-turned-politician to quit the cabinet.

Now, a year after his unceremonious exit from Congress, Singh has formally joined BJP, which he had aligned with in the state elections earlier this year that saw the Aam Aadmi Party (AAP) secure 92 seats in the 117-member Assembly. It was a crushing blow to Congress, which had expected to cash in on an apparently contrived political posturing by anointing Charanjit Singh Channi, who belonged to the Dalit Sikh category, as Singh’s successor in the chief ministerial job. The idea, described as gratuitous by rivals, was to attract the Dalit vote in Punjab, which accounts for the largest number of Dalits among all states as a percentage of the total population: 32 per cent.

Singh joined BJP on September 19, exactly on the day he had to quit as chief minister a year ago. He didn’t join alone. His son Raninder Singh and daughter Jai Inder Kaur followed, featuring on a long list of Punjab Congress leaders to join BJP that includes former state chief Sunil Kumar Jakhar, Balbir Singh Sidhu, Gurpreet Singh Kangar, Raj Kumar Verka and Sunder Sham Arora. With Singh joining its ranks, BJP will now look forward to enhancing its electoral prowess in Punjab following its poor performance in the 2022 polls. In sharp contrast to BJP’s steady advances in neighbouring states, it has so far done badly in Punjab because it had preferred to remain a partner to a regional party. In the last election, it had multiple challenges to tackle, including the farmers’ agitation against the farm laws made by the Modi government.


In contrast to BJP’s steady advances in neighbouring states, it has so far done badly in Punjab because it had, till recently, preferred to remain a partner to a regional party

While joining BJP, Singh made a statement that highlighted his concerns about India’s internal security that he has harped on for years. “We are grateful to the prime minister, home minister and the BJP president. Punjab is a border state, and I have seen our relations with Pakistan deteriorating. Drones are coming into our territory now to create complete chaos in Punjab. China is also not far from us. It is our duty to protect our state and the country,” Singh said, adding, “It is now time to join a party that is looking after the interests of the country.” Singh, popularly known as
Captain, is not new to such political mergers. He had left the Akali Dal to form the Shiromani Akali Dal (Panthic) decades ago and then merged it with Congress in the 1990s.

Surinder S Jodhka, professor of sociology at JNU’s Centre for the Study of Social Systems, is of the view that this merger helps both Singh and BJP. “For Amarinder, it helps him not to politically disappear into oblivion and continue to have a political identity for a little longer. He is unlikely to even aspire to come back electorally. For BJP, it helps expand its ‘footfall’ in the state, beyond its limited social base among the urban Hindus. BJP must be seeing it as a minor political investment. They certainly don’t lose anything. Amarinder is unlikely to make their local leaders feel insecure.”

BJP’s efforts to make inroads into Punjab, the Sikh heartland, go hand-in-hand with Prime Minister Modi’s propensity to project himself as a true follower of the Sikh gurus. He has never lost an opportunity to display his reverence for them.

In April this year, Modi had said that India would reach the pinnacle of its glory if it took inspiration from the values and ideals of the Sikh gurus. He said this in a message to commemorate the 400th birth anniversary of Guru Tegh Bahadur, the ninth Sikh Guru. He said: “In the past four centuries, there has not been any period in the country that we can imagine without the influence of Guru Tegh Bahadurji who had shown us the path of service to the nation and fellow beings.”

The NDA government, meanwhile, had also organised with much pomp the 550th birth anniversary of Guru Nanak Dev, the founder of Sikhism, and the 350th birth anniversary of Guru Gobind Singh, the 10th Sikh Guru. The prime minister has often noted that his government had repeatedly shown its commitment to “guru seva” by constructing the Kartarpur Sahib corridor. It was his government that announced the decision to observe Veer Bal Diwas on December 26 to commemorate the sacrifice of the sons of Guru Gobind Singh. He has often maintained that the sacrifices and teachings of the Sikh gurus had inspired many generations of Indians to live and die to protect the dignity of their culture and its honour. Modi had also addressed the nation from the Red Fort to celebrate the 400th birth anniversary of Guru Tegh Bahadur, from the site where Aurangzeb had given orders for his execution in 1675. Modi was widely quoted in reports as saying, “In front of Aurangzeb’s tyrannical thinking, Guru Tegh Bahadurji, becoming ‘Hind di Chadar’, stood like a rock.”

The BJP leadership in Punjab is thrilled at Singh’s entry, primarily because, says a local leader, “BJP will now focus entirely on the state with the help of top-level local politicians we now have. The party will have a greater level of freedom to expand on its own and not wait for its allies to take the initiative. We are excited about the central leadership directly monitoring all such efforts to grow the party organically. People like Singh will be able to guide the party in a better fashion, being part of this well-oiled machinery. We now have a golden opportunity to prepare ourselves for the next General Election in 2024 and for the state elections of 2027. We don’t have to worry about what some powerful ally might think of our ambitious programmes and plans.”

Notwithstanding BJP’s unimpressive electoral performance this year, the local leader’s enthusiasm sums up the current mood in the state BJP and its appetite for rapid growth.