All Sound and No Fury at G7 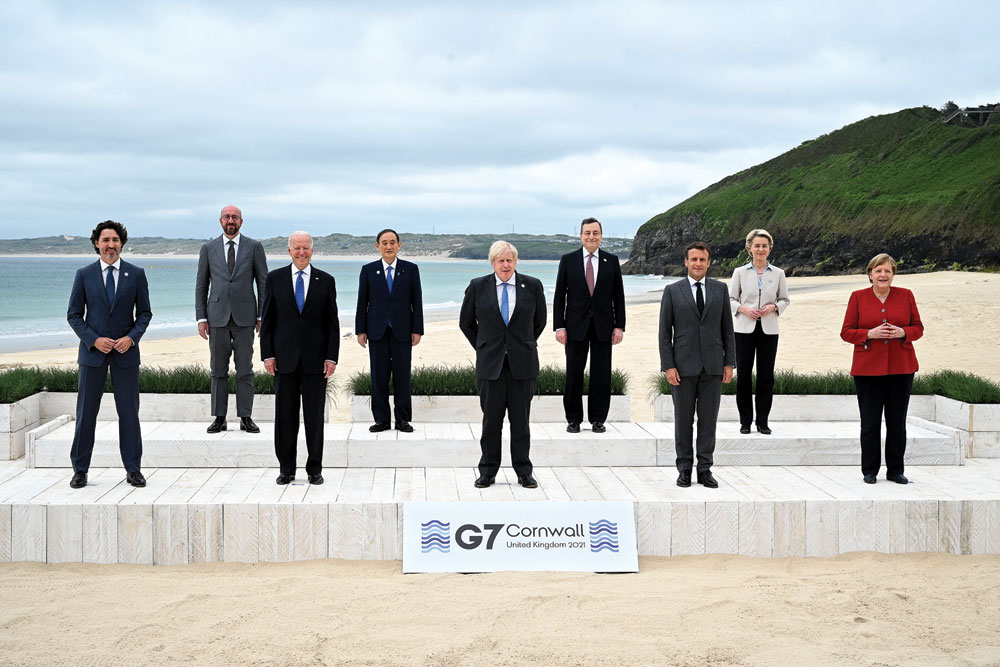 
FOR A GROUP known for business-like conduct, the joint statement issued at the end of the meeting of the Group of Seven (G7) nations was anodyne and bordered on being soporific. In 70 paragraphs, the statement ranged from infrastructure financing, Africa, China, internet freedom, vaccines for Covid-19, climate change and much more. The “something for everyone” statement hinted at it being crafted by burning midnight oil in a way that would please everyone. But there were few, scattered references to the bull in the room: China.

There was just one pointed reference to China: “We underscore the importance of peace and stability across the Taiwan Strait, and encourage the peaceful resolution of cross-Strait issues. We remain seriously concerned about the situation in the East and South China Seas and strongly oppose any unilateral attempts to change the status quo and increase tensions.” For a world that is at the receiving end of Chinese mercies, this was remarkably thin.

For a while, there has been speculation that a new Cold War is in the offing, this time between the US and China. But unlike the last one when ideological lines were clear—the “free world” versus “totalitarianism”—the new edition is a bundle of contradictions. Take the G7 itself. Never has the master control switch of the world been so difficult to operate. Countries within the group are beholden to Chinese largesse—money, technology, access to markets and more—and even the one country that can make a difference, the US, has been penetrated by Chinese money and influence that makes an ideological front difficult to sustain. The world is in a curious situation: it sees the threat very clearly, has the means to confront it and yet remains paralysed to do anything meaningful.

In getting to this situation—conducive to its imperial ambitions in every way—China has played its cards very well. Unlike the first Cold War, when the Soviet Union was isolated from the world—except for some forlorn outposts in the Third World—China is fully integrated in the global economy and has managed to influence ideological currents as well. It now has a territorial foothold across the world of a kind that only the US had in the past. From ports in strategically located places such as Hambantota in Sri Lanka to Djibouti on the Horn of Africa to having “clay and putty” states like Pakistan and Sudan at its call, China is now a serious rival to the US in controlling the world. In showering financial largesse across the world—with no questions asked and strings tied—it makes the US appear like a bedraggled Uncle Scrooge. The Western “Build Back Better” idea is just words on paper when compared to China’s formidable Belt and Road Initiative (BRI). For all its troubles, BRI has impressive reach in Eurasia while BBB is yet to take off. The new Cold War, even if it ensues, is likely to be bruising and nothing compared to the past.

Where does all this leave India? India’s approach to G7 should be understood at two levels. In the immediate context, India’s search for alliances and partners is dictated to a great extent by its problems with China. A longstanding border dispute turned into a near-war situation last year. This was the first time in more than 50 years that the armies of the two countries came to blows. There have been “hot” encounters between the two sides after the 1962 war, such as the Nathu La and Cho La clashes in 1967. But these clashes took place at a time when there was no elaborate system of agreements and accords to keep the disputed borders peaceful. The clashes last year destroyed that system that had been carefully built over the decades. This makes the Galwan incident a marker of likely future confrontations, unlike the 1967 clashes that were localised and ended in a short span of time.

The economic and military imbalance between the two sides greatly adds to India’s troubles. The huge gap in the sizes of India and China’s economies needs no elaboration. It is highly unlikely that even a mild convergence between the two economies will begin anytime soon. India, battered by two waves of the Covid-19 pandemic, is waiting to catch up to its pre-2020 level of economic growth. China, in the meantime, is growing at a rapid pace. This reflects in the military imbalance too. On paper, India spends a higher fraction of its output on defence. In 2020, India spent 2.9 per cent of its GDP on defence, a figure that it last touched in 2010. From 2013, its spending has hovered around 2.5 per cent. China, in contrast, spends less: 1.7 per cent of GDP in 2020, and in the same range since 2013. In absolute terms, however, China outspent India by a factor of 2.75 in 2013. This galloped to an alarming 3.45 times in 2020, the year the two armies clashed.

Even with all the difficulties involved in comparing such expenditures, the fact remains that India lacks the military muscle for any sustained fighting with China. It has to buttress military means with aggressive diplomacy to balance China. India’s outreach to G7, the Quad and other groupings is clearly meant to be a check on China. The defence of its borders requires that India take these steps, and fast.

At some point, however, the potential for conflict and hard trade-offs in this quest cannot be ruled out. India signing off on the joint G7 statement offers an instructive example in this respect. That statement includes a line that says, “We also affirm our opposition to measures which may undermine these democratic values, such as government-imposed internet shutdowns and network restrictions.” As a democracy, India is probably among the most open societies where heated and polarising debates take place on a daily basis. But one of the key problems that the Narendra Modi Government encountered when it came to power in 2014 was the abuse of these freedoms to fan secessionism in states like Jammu and Kashmir and divisiveness in many other states. The key challenge was internal cohesion affecting territorial integrity, and not external threats. But since that time, platforms like Twitter have been used to fan this problem manifold in almost every state.

The trade-off, thus, is a very hard one. Since 2013, India has managed to restore a semblance of internal cohesion. The lack of this had begun to fray its edges and had even become a norm of sorts. It was, of course, spoken in coded language, for example, by making extreme arguments in the name of “federalism.” By the time this problem was beginning to be fixed, a severe external challenge in the form of China created the other side of the territorial integrity problem: a direct challenge to India’s borders. Now, as India seeks to fix the external challenge, its other—internal cohesion—goal may come under stress. The Indian Express had on June 14th reported that India conveyed its reservations privately to the group even as it signed on the joint statement. The champions of “federalism” and platforms like Twitter know this very well. So, as India battles an external enemy, it will face far greater internal challenges in the time ahead.

As the world begins to get an outline of a strategy to handle China finally, the new “Cold War” is unlikely to be a repeat of the old one. That world offered far clearer strategic choices which did not undercut alliances in unforeseen ways. The omnibus, please all, offend none statement issued at the end of a bracing summit in Cornwall reflects this new complicated reality.

Back to the Office...

…with trepidation as the Covid threat still looms