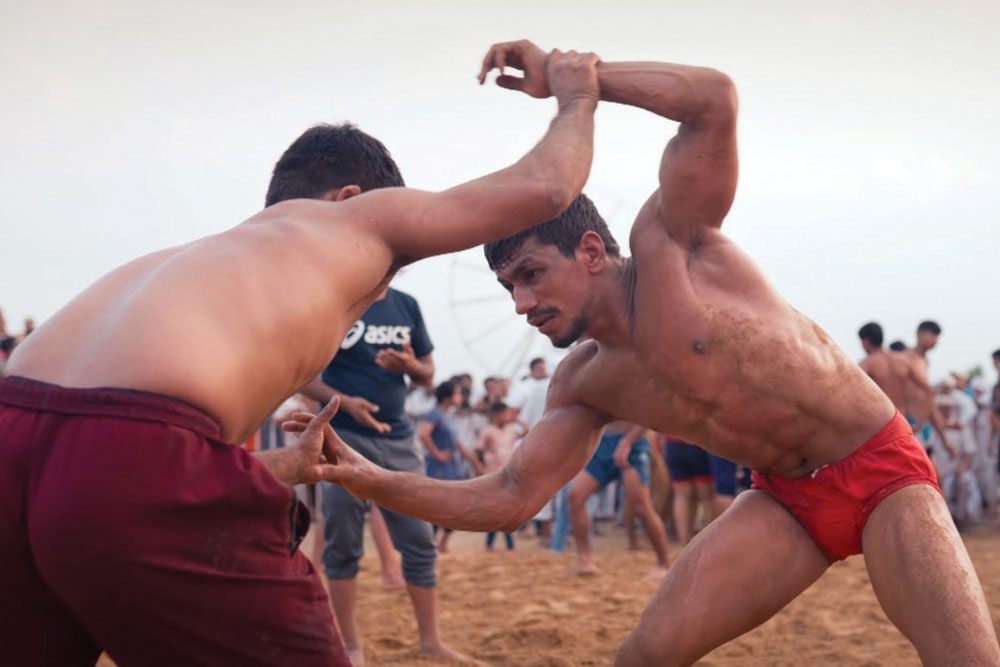 A scene from Dangals of Crime


A MAN WHO WOULD send body parts of his victims to his former wardens at Tihar Jail. Another who murdered his wife and then buried her in the backyard of her house in Bengaluru. A gang that was involved in 13 cases of hideous robbery and murder in Delhi.

Over the next few months, streaming services are going to serve murder in all its gruesomeness. The body count will be high, the flow of blood steady and there will be vileness beyond measure.

And by all accounts everyone will love it. As the success of fictionalised versions of true-crime narratives have shown of late, the audience’s appetite for murder and mayhem is endless. Taking off from the success of movies such as Talvar (2015), based on the twin murders of Hemraj and Aarushi Talwar, as well as the popularity of last year’s House of Secrets: The Burari Deaths on Netflix, the case files have been dusted and the facts uncovered to reveal human behaviour at its worst.

The hunger for blood and gore has always existed, says former Delhi Commissioner of Police Neeraj Kumar. There just weren’t enough platforms on which these stories could be told. Now whether it is Netflix’s forthcoming series on serial killers, Indian Predator, or Amazon Prime Video’s Dancing on the Grave, the cliché of truth being stranger than fiction has never been truer.

Kumar, who wrote the show Police File Se, as a young officer with the Delhi Police when the legendary Ved Marwah was commission­er, still remembers how popular the 13-epi­sode series was on Doordarshan in 1986. The idea was to publicise the good work done by Delhi Police, says Kumar. The same reasoning was behind his proposal to young director Richie Mehta whom he met at a party. Kumar was Commissioner of Police in Delhi when the Nirbhaya rape happened in 2012. Ghastly as it was, he wanted Mehta to focus on the investigation which was wrapped up in a week against all odds. Mehta, initially reluctant, changed his mind when he read the charge sheet and the judgment in the case. Thus was born Delhi Crime, which was much acclaimed in its first season in 2019, with a breakout role for Shefali Shah as Vartika Chaturvedi, based on the real life DCP South, Chhaya Sharma who was the head of the team investigating the Nirbhaya rape. Delhi Crime’s season two was based on the gang of thieves that terrorised Delhi between 1990 and 1992 when Kumar was DCP of the South district. Shefali Shah became the fictional Vartika in season two, parts of which were reshot upon Netflix’s recom­mendation. It is yet to be released. Perhaps the gang’s modus operandi was too grisly to be shown in detail—dressed in underwear, hence their name “kachcha baniyan gang”, not only would they rob their victims, they would also club them to death and then defecate near the corpses.


Not the kind of thing you’d like to watch with your dinner, right? Wrong. In the true-crime space, the ghastlier the better. Indian Predator tells the stories of four serial killers in four seasons. Ayesha Sood has directed the three-episode season on Chandrakant Jha, a street food hawker in Delhi who sent body parts of those he had murdered and dismembered to officers in Tihar Jail in the season called ‘The Butcher of Delhi’. Ashwin Rai Shetty has directed the season on the serial killer in Bengaluru, Umesh Reddy. Dheeraj Jindal has helmed the episode on the woman known as Cyanide Jolly in Kozhikode who poisoned and killed six members of her family over 14 years. And Umesh Kulkarni has directed the episodes on Akku Yadav, who was infamously lynched in court by more than 200 women who had been terrorised by him for years. 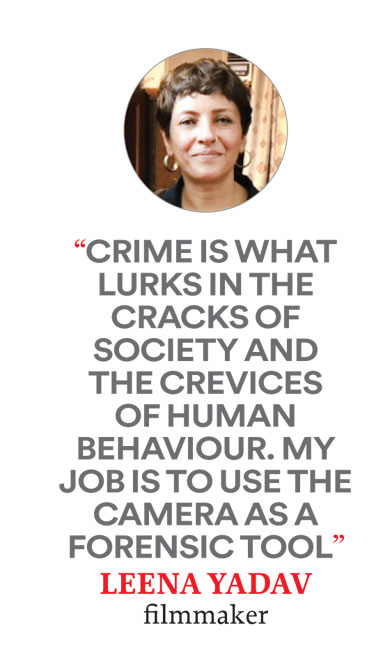 Some of these have already inspired movies. The Umesh Reddy case has sparked two films already whereas the Akku Yadav case inspired the recent online movie 200: Halla Ho. Yet there is demand for more. Leena Yadav, who has films like Parched (2015) and Shabd (2005) to her credit, was fascinated by the deaths of 11 of a family in Burari, Delhi. She mailed a few articles about it to Netflix’s international team who loved it. She went on to create House of Secrets: The Burari Deaths (2021). “I went in with my instinct,” says Yadav. “I didn’t follow any for­mat.” She uncovered the layers of confusion and ignorance by conducting over 70 inter­views with neighbours, friends and police officers, being part detective, part therapist and part filmmaker. “Crime is what lurks in the cracks of society and the crevices of hu­man behaviour. My job is to use the camera as a forensic tool,” she says.

Director Sood, a true-crime enthusiast, believes India is ready for the elevated prestige documentary, given what it has been consuming on international stream­ing platforms. “Certain crimes tell you so much about where the country was at that point in time, what were the social constructs, the human emotions, the identity wars, the way the media covered it,” she says. Which crimes make news and which don’t also says a lot about society. The enduring obses­sion with the Aarushi Talwar murder of 2008, for instance, and the way it was projected in the popular imagination reveals a lot about middle-class India—beginning with the fact that it was a double murder, and included the killing of the family help Hemraj, who was made completely invisible in the media narrative.

Sood saw the class war at work in the Chandrakant Jha case she covered in her season of Indian Predator. It is a grim case that did not get the attention it deserved because both the victims and the murderer belonged to the working class. Unlike in the West where true-crime documentaries help in archiving and keeping justice alive, in India the system is so over-burdened that the police often want to tie up loose ends as quickly as possible. There is no desire or motivation to understand what crime means to society or what trauma is caused by dysfunctional families. “The violence is unrecorded and unstudied,” she says. Add to that, says Shetty, even private news channels don’t have archives beyond 15-20 years.

There are also restrictive conventions and laws, from the custom of officers avoiding comment if the appeal is pend­ing in the High Court or Supreme Court and the case is of sensitive nature to the Right to Be Forgotten, which is available to both survivors and perpetrators.

And though there is a culture of true-crime reportage on television, it has tended to be melodramatic and sensational, spilling over from TV news to long-running TV shows such as Crime Patrol and Savdhaan India. There is no tradition of remembering dates, events and specific details of events for posterity, and most of all, there is no closure, says Sood. Whether it was the Jessica Lal murder or the Priyadarshini Mattoo murder, there is no closure even if there is a convic­tion. The social conditions don’t change, the underlying reasons are brushed under the carpet, the pattern is repeated.

So, it was with the case of Murli Manohar Mishra who murdered his wife Shakereh and buried her in the backyard of her Bengaluru home that he coveted, and which was apparently worth hundreds of crores of rupees. His story is directed by Patrick Graham for Amazon Prime Video in Dancing on the Grave. The process of research can be as arduous as it can be terrifying, given the convicted are usually master manipulators. Mishra, currently lodged in Sagar Central Jail, in Madhya Pradesh, insists on his inno­cence and says he can prove it even as he serves a life sentence. Indrani Mukerjea who is currently being interviewed for a documentary is also effective in convincing people about her versions. Vice Studios, which just filmed Dangals of Crime: The Untold Truth About Indian Wrestling for Discovery+ about wrestling’s connection with the world of crime, specifically a murder allegedly committed by Olympian Sushil Kumar, is working on a documentary on Nithyananda, a self-styled godman who has been accused of rape and abduction in many cases. 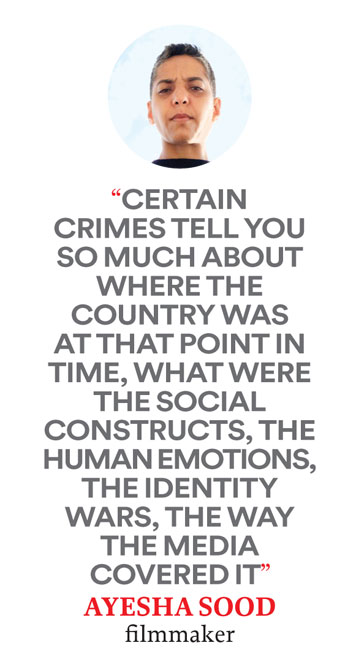 Cauvery Rajagopal, head of business development for Vice Studios, believes the taste for true crime will evolve aestheti­cally and stay authentic to the subject in the next few months. India’s Daughter (2015) on the Nirbhaya rape, told through the accounts of two of the convicted rapists, may have been shock­ing at the time, but audiences in India are a little more accus­tomed to seeing more than just one point of view and are a lot more alert to mental health issues now. “Abuse begets abuse,” she notes, and “not everyone starts out by being diabolical. In the case of Nithyananda, power corrupted him so much that he left destruction in his wake.”

True crime doesn’t always end in blood and gore. Bad Boy Billionaires (2020) on Netflix showed the potential of white-col­lar crime documentaries. Yadav is examining the possibility of filming the Ranbaxy family saga of how a pharmaceutical giant can implode from within taking down decades of hard work.

But even as we indulge in tales of shock and horror, the biggest danger is becoming numb to the macabre. Shetty says as he inves­tigated the case of Reddy, losing his humanity was his biggest concern. “You start seeing the victim as just another corpse,” he says. The lines between normal and diabolical begin to blur. Compassion takes a beating. Crime becomes normalised.