A Resigned Sigh at CPM Summit

And a warning against underestimating BJP and its sway 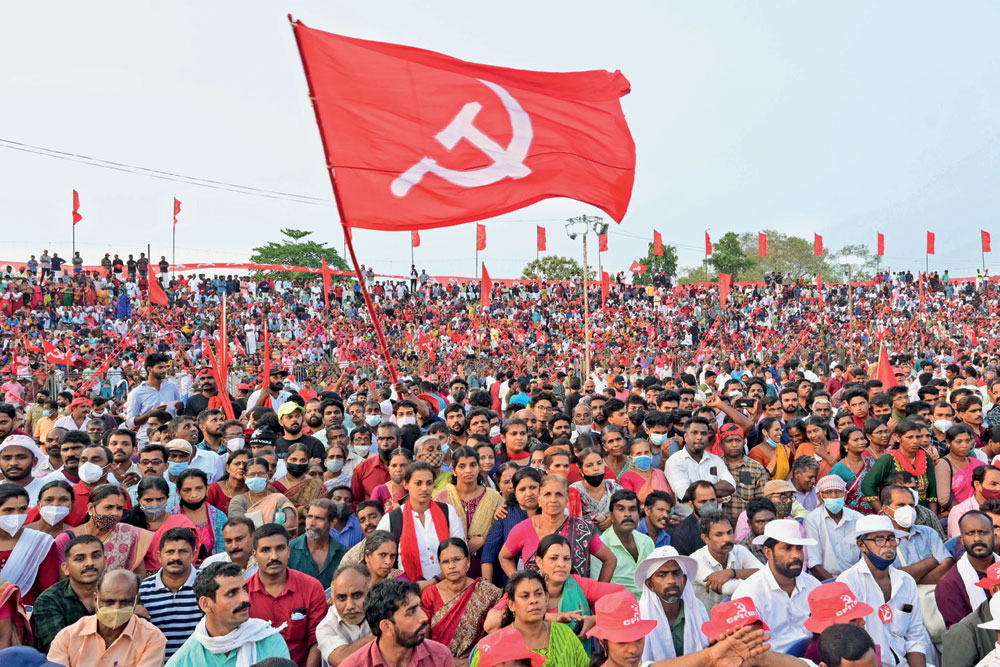 
THE TYPICALLY TRIENNIAL high-level meet of the Communist Party of India-Marxist (CPM), held recently in a resplendent display of its organisational prowess in its north Kerala stronghold of Kannur, which was awash in huge red banners, blinding lights and dazzling decorations, was also marked by political sobriety in more ways than one. The summit in the hometown of Kerala Chief Minister Pinarayi Vijayan left nothing to chance in offering generous hospitality to more than 800 delegates of the party from across the country. The organisers painted the town red.

The 23rd party congress of the biggest mainstream Left party in India, organised from April 6 to April 10, was regardless much less cacophonic than its previous two meets, in fact three, held since the biggest electoral setback to Left parties: the 2011 fall of West Bengal where it had stayed in power for 34 long years, the last decade of which saw the party intruding into the private lives of people with greater ferocity than ever before. The last party congress was held in Hyderabad in 2018, and the one before that in Visakhapatnam, in 2015.

The Visakhapatnam conference saw a standoff between current General Secretary Sitaram Yechury who would stop at nothing to replace the outgoing chief Prakash Karat, even, reportedly, threatening to split the party if he did not make it to the post. What transpired in closed circles that eventually saw his nomination to the top post of the CPM isn’t clear yet. To some extent, nobody seems bothered anymore.

Then, the Hyderabad party congress saw a semantic quibble that outshone and relegated matters of grave concern to the fringes. In that conclave, the political resolution was presented by former general secretary and Politburo member Prakash Karat and a minority view of the Central Committee by Yechury who advocated an “understanding” with the Congress. Yechury’s proposal had been shelved by a 55-31 vote at the Central Committee level, but he decided to take it to the summit with the aim of asserting himself. A close scrutiny of the draft political resolution and the one that was finally adopted reveals hardly any difference between them. The word “understanding” was excised from Section 2.115 (ii) of the political resolution to state that the party can join hands with secular democratic forces “without having a political alliance with the Congress party.”

In fact, the CPM’s 20th party congress held in 2012 in Kozhikode in Kerala was widely covered, although the Left had suffered a resounding defeat to the Mamata Banerjee-led Trinamool Congress in West Bengal. The two meets that followed also attracted national headlines despite the Left’s fall from grace. The reasons were obvious: that there were expectations in certain quarters of a change in the 2019 elections.

This time around, no such hope was in sight and held in the aftermath of the Uttar Pradesh elections that saw the Bharatiya Janata Party (BJP) cruise back to power, the celebratory mood of the biggest meet of CPM stayed confined to Kerala, the party’s last outpost of sorts. With the Kerala unit being major financiers of the national party, there was a lot of talk about the Kerala model of development—without specifying what it actually meant—to be replicated elsewhere. The lazy approach of economists affiliated to the Left in the state in studying the state’s economic trends in a proper fashion added to the confusion. The hype was in the air, though. Naturally, it appeared that the national leadership of the party that once had the option of structural autonomy and daring to stand up against powerful state units also caved into the Kerala unit’s insistence on not making any contrived outreach to warm up to Congress, as the West Bengal unit did unsuccessfully in the past few elections to fight Trinamool Congress and isolate BJP.

Instead, what dominated discussions was the call to tie-up with regional parties to make attempts to stop the march of BJP. Clearly palpable at the summit was a sense of realisation among the leadership of CPM as well as the delegates, as it had never happened before in its existence, that the party is facing its biggest challenge yet, that of survival at the national level. While a section of party leaders is said to be nursing the hope of a large umbrella coalition to prop up the usual suspects to combat BJP at the Centre, the likes of Karat, and many others, do not subscribe to any such excessive optimism and unrealistic expectations.


What dominated discussions was the call to tie-up with regional parties to make attempts to stop the march of BJP. Clearly palpable at the summit was a sense of realisation among the leadership of CPM as well as the delegates that the party is facing its biggest challenge yet, that of survival at the national level

A group of West Bengal partymen were quick to dismiss regional parties, with a few exceptions, as untrustworthy and were not averse to joining hands with BJP. A delegate from the state is said to have identified only Lalu Prasad’s Rashtriya Janata Dal (RJD) as the quintessential secular party because, according to him, the rest have historically, in one way or the other, had a truck with BJP.

Speaking to Open, Karat however said that the political resolution was not an outline of his party’s electoral strategy, but a review of the political situation in the country. He said that the resolution had clearly categorised regional parties into three: those opposed to BJP, the fence-sitters and those aligned with BJP. He argued that it was up to the party at the time of the elections to frame strategies based on the options ahead to create a secular front against BJP.

The most notable part of Karat’s pronouncements about the national situation, apart from the Left parties’ need to mobilise masses and take advantage of political opportunities to take on BJP, is a warning against underestimating BJP and its sway. “Many people, including those who want to fight the BJP, see it only as a communal force,” Karat states, emphasising that BJP and its Hindutva allies have successfully projected themselves as a nationalist party that has vowed to make the country a strong power, a tempting political proposition for those willing to turn a blind eye to their Hindutva agenda.
BJP surely has weakened subtly compared with 2017 and now, but that is not to be seen as the limitation of the political appeal of BJP, other CPM leaders, too, have said. In 2017, the BJP-led coalition was in power in 21 states compared with 17 now. Karat says BJP has raised the nationalistic bogey to cover its failures as well as camouflage its larger communal designs, conceding that the ruse seems to be working in pulling in votes.

The delegates at the party congress, especially those from the southern states, voiced their concerns about the rising influence of Islamist entities such as the Popular Front of India (PFI), its political and student arms, as well as Hindutva forces, who, they averred, feed on each other. A few of them, while talking to Open, also worried about CPM in West Bengal trying to “appease” the minority community in a bid to encroach onto TMC’s vote base. “Such communal sounding campaigns by a few top-level leaders will only antagonise people who do not expect such ugly posturing by CPM. To gain any foothold in West Bengal, CPM has to work harder to draw crowds now disenchanted with both Trinamool Congress and BJP, but not by diluting its ideological stance and resorting to soft communal campaigns,” says a delegate.

For CPM, which has considerably weakened from its prime in the early part of this century, this party congress served as a self-reminder, much more than any other, of its fight against irrelevance nationally. Behind all the colourful hoardings burnished with sickle and hammer, Soviet-era posters of Marx, Engels and various communist leaders and large crowds—that some local newspaper described as an ocean of red—was a gnawing fear of shrinking further in the national scheme of things.