A Bridge to Abu Dhabi 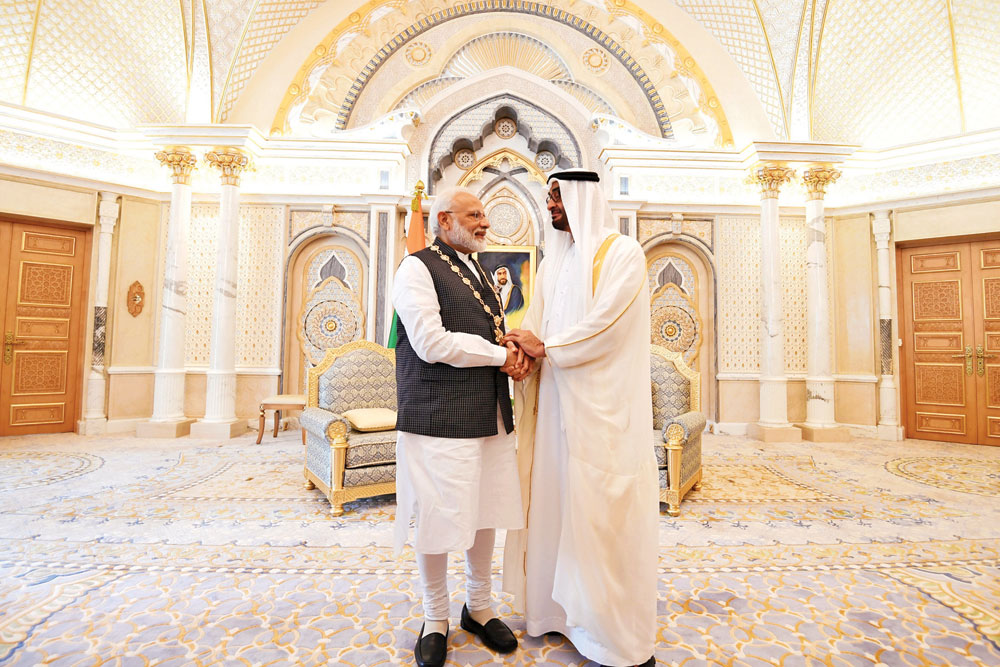 
IF THERE WERE a record for the free trade agreement (FTA) negotiated and signed in the shortest span of time, it would surely belong to the India-UAE Comprehensive Economic Partnership Agreement (CEPA). Signed on February 18, the agreement took all of 88 days to be finalised and signed by the two sides. The agreement comes at a time when there is widespread pessimism about global trade. If anything, ever since the Covid-19 pandemic started, protectionism has been the rule and free trade an exception. The CEPA proudly signals that India is ready for business.

“This is truly a landmark partnership between the two nations whose people, whose political leadership and whose businesses share very strong bonds for many years in history,” Piyush Goyal, the Union minister for commerce and industry, said a day after the agreement was signed. He added: “This CEPA is extremely beneficial for MSMEs, startups, farmers, traders and all sections of business and will give a big boost to the economies of the two countries.” Goyal was at pains to emphasise that the CEPA was much more than an FTA.

On February 18, in his remarks during the virtual summit, Modi said, “This agreement reflects the deep friendship between the two countries, a common vision and trust. This agreement marks the start of a new economic era between our two countries and our trade in the next five years will go up from the present $60 billion to $100 billion.”

Under the agreement, a number of goods produced in India will attract zero tariff access in the UAE market. A number of Indian sectors—apparel, gems and jewellery, manufactured items, leather goods and more—will benefit from accessing this important market that serves as a point of entry to African, West Asian and European markets. In his remarks to the press a day after the agreement was signed, Goyal said that he expects up to 10 lakh jobs to be created as a result of the CEPA. Highlighting two sectors in particular (he had a list of nine), Goyal said that in textiles alone, industry associations expect exports to UAE to rise by $2 billion in the years ahead. But among the biggest prizes, the gems and jewellery sector’s exports are expected to rise by a whopping $10 billion in years to come.


UAE, unlike China, is a very different country. It represents growth in trade that is fair and evenly balanced. The CEPA is a sign of maturity in ties

In the gems and jewellery sector, both countries stand to gain. If Indian-manufactured jewellery stands to gain then, in the case of UAE, India has agreed to tariff reductions in gold exports from that country. India has a virtually insatiable demand for gold. Last year, it imported 800 tonnes of the yellow metal. There have been years when gold alone has accounted for a substantial fraction of India’s Current Account Deficit (CAD) and as such gold imports are a sensitive trade matter. Under the CEPA, India has agreed to a Tariff Rate Quota (TRQ) of 200 tonnes where the duty on imports from UAE will be 1 per cent less than what India charges for the rest of the world. In effect, UAE will have a tariff advantage of 1 per cent over all other countries on gold exports to India. If that threshold is breached, the duty will go up. Last year, India imported 70 tonnes of gold from UAE.

Trade agreements are a sensitive issue as very often there are domestic winners and losers from these agreements. In theory, free trade sounds like a pleasing prospect as cheaper imports give benefits to consumers. But the obverse is that these cheap imports also have the potential to hit domestic producers as well. Jobs, income, dependence on trade and much more are tangled. After the dominance of China in global trade—often through dubious means such as subsidies to its domestic producers—sustaining trade agreements requires trust between trading partners. Both Modi and Goyal were at pains to emphasise this aspect of the India-UAE relationship.

But even with trust—built up over a number of years—the CEPA has safeguards for both sides. These in-built features are necessary in today’s complicated world. One example highlighted by the commerce minister was that of steel. Steel is one commodity that large producers like China have often ‘dumped’ on other countries where demand is high. But this does not help importing nations beyond a point: the domestic industry often gets depressed. In the CEPA, the two countries have agreed to a “melt and pour” clause that has been designed to prevent steel from third countries being dumped in the Indian market. Under this clause, steel has to be manufactured in UAE.

This requirement is part of the “country of origin” rules and safeguards built into the CEPA. To prevent other countries from inserting their products in the India-UAE trade, a 40 per cent value addition in the goods being exported to India will be necessary. This is a substantially high percentage of local UAE inputs for the purpose of safeguards. To give more teeth to this provision, the certification for this will be given by the UAE government and this will add to trust in this matter.

Another safeguard mechanism in the CEPA deals with a sudden surge of imports (in both countries). If that “unnatural” surge does take place, the two countries can undertake countervailing/anti-dumping duties as a remedy. When seen along with the strict country of origin rules and local value addition, the CEPA has plugged loopholes to prevent abuse of its generous provisions.

SAFEGUARDS ARE ONE thing but trade is always about two-way benefits between partners. One of the more innovative features of the CEPA is the Food Security Corridor Initiative. Under this, an MoU has been envisaged between APEDA, India’s exports development authority for agricultural and food products, Al Dahra of UAE and DP World, the logistics management company there, to ensure UAE’s food security. UAE is not a food-growing region and is dependent on imports of most items that it consumes. India produces practically all kinds of food items and is surplus in many of them. India’s problem is one of finding export markets for items like rice, wheat and other foodstuffs. The CEPA offers one big opportunity for India’s farmers and agricultural exporters to tap a big market.

Under the CEPA, India has also managed to open doors for its pharmaceutical products. If Indian products are approved by the regulatory authorities of countries like the US, UK, Australia and Japan, it will not have to seek the same approval again in UAE. This saves Indian manufacturers of approved goods a double bureaucratic gauntlet that involves massive compliance costs. This gives a boost to India’s efforts to build itself as the “pharmacy of the world” and further the fortunes of its substantial pharmaceutical sector.

The CEPA offers an opportunity for India’s farmers to tap a big market. India has also managed to open doors for its pharmaceutical products

UAE is perhaps India’s second most important trading partner given the nature of its trade, the composition of the export basket and the potential for balanced trade between the two countries. In 2017-18, two-way trade was $50 billion and in the next two years it rose to $60 billion per year. There was a dip during the pandemic years but, importantly, the two countries kept their supply chains open. UAE helped India with key medical supplies like liquid oxygen when many other countries had banned the export of key equipment and supplies. India’s exports to UAE have also remained on an even keel. India routinely exports about $30 billion worth of goods and the pattern of trade is largely balanced. This is unlike India’s other trading partners like China where imports are in multiples of India’s exports. No amount of negotiation has helped to restore balance in trade. The result is a general souring of relations where India has been forced to take measures to safeguard its economic interests. UAE, in contrast, is a very different trading country that represents potential growth in trade that is fair and evenly balanced. The CEPA is a sign of maturity in ties.

IN HIS REMARKS after the CEPA was signed, Goyal said the FTA with the Gulf Cooperation Council (GCC)—the economic union comprising Bahrain, Saudi Arabia, Oman, Kuwait, Qatar and the UAE—that has stalled since 2008 is also in the process of being negotiated at speed. Teams from India and GCC are near to finalising the terms of reference for a possible deal. Similarly, a ‘mini-FTA’ with Australia is also likely very soon. This deal will try to reap the ‘low-hanging fruit’ while keeping aside the more contentious trade issues. The mini-FTA with Australia is likely to include sectors such as pharmaceuticals, education, health, textiles, and gems and jewellery. Earlier this month, Goyal met his Australian counterpart Dan Tehan and the two agreed to “aggressive timelines” to complete the deal. A lot of bilateral trade between the two countries is already under the ambit of trade agreements and this is likely to go up even further with the mini-FTA. The contentious issues are largely in agriculture (for example, in the dairy sector) that provide livelihood to millions of small farmers in India who are unlikely to be able to compete with the scale of Australian agribusiness.

India’s newfound aggressiveness on trade has a good economic rationale. After the pandemic hit the Indian economy, its mainstays like consumption and investment demand have come under sustained pressure. These are expected to normalise but with a substantial time lag. In contrast, trade has grown by leaps and bounds during this period. In his press conference in Mumbai on February 19, Goyal mentioned that by February 14, India’s exports this year had crossed the $350 billion mark and are well on their way to achieving the highest ever export performance of $400 billion by the end of March. In this context, it makes sense for India to push trade as a source of economic growth pending the revival of other sources of growth. In a difficult economic situation, trade has been one bright spot. In April 2020-January 2021, exports amounted to $229 billion, a figure that leapt to $336 billion in April 2021-January 2022. It makes great sense to push trade in this situation. FTAs are one way to ensure that this growth continues in the years ahead.