The Woman Who Took on an Institution

Rina Mukherji fought a sexual harassment case against her erstwhile employer The Statesman for ten years, facing delays and defamation suits, until she finally saw a favourable judgment last year 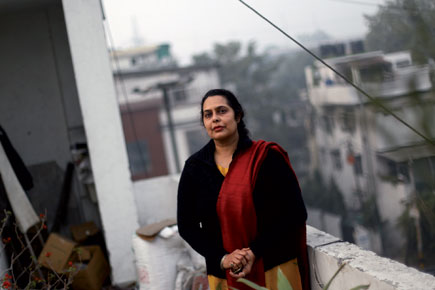 I joined The Statesman, Kolkata, as a Senior Reporter on 10 June 2002. My career began in Mumbai where I worked for some leading media houses for about five years. That was followed by a move to Delhi for a PhD on a UGC fellowship. Then marriage brought me to Kolkata and I joined Business Standard until the arrival of my baby daughter pulled me out of full-time work for a while. I was, hence, particularly anxious to resume my journalistic career with a job at The Statesman.

The first couple of weeks were fine, with everyone making me feel welcome and part of the team. About ten days into the job, I noticed the news coordinator Ishan Joshi looking for opportunities to touch me. When I walked down office corridors, Joshi would dash into me and paw me as he walked past. He would also touch me whenever I was with him in his room. Technically, he was my boss’ boss; I reported to the Chief Reporter who in turn reported to the News Coordinator. I started avoiding him as far as I could. His moves only got bolder. He would try putting his arms around me even as he talked of work. Pushing him away, as I always did, would not deter him.

There was also the kind of stare that seemed to bore into me and leave me numb. Very soon, he was not only pawing me in the corridors, but even in the News Room, in full view of every one. His hands would always be on mine, if I happened to be within range, notwithstanding the presence of the Chief Reporter, News Editors, and sundry senior and junior colleagues.

I was unable to react immediately for two reasons. The experience itself was hard for me to talk about, especially in a new office and to insufficiently familiar colleagues. Secondly, I did not want to lose the job; it was the first step towards my professional rehabilitation. Joshi, on the other hand, enjoyed powers far beyond news coordinators elsewhere. He reported only to the Managing Editor and Editor-in-Chief and his word was law with respect to appraisals. I knew a complaint against the man was likely to result in my termination, especially since I was a probationer.

I hated it every single day, but there was little to do. My frustration had started telling on my temperament. I vented some of the rage on my little four-year-old every time she clung to me for attention following my return home. I wanted to explode but could not. I had no close friends at the office and I found it difficult to share my embarrassing experience with my husband at home.

Joshi understood by July that I was more resilient than he had anticipated. He gradually changed his strategy and switched to demolishing my professional credibility. From July-end, I found some of my best efforts steadily filling the garbage bin. The number of rejected stories shot up in August and by September anything and everything I wrote was indiscriminately rejected. Incidentally, this was when the Chief Reporter went on holiday and the Officiating Chief Reporter had very limited powers. Joshi now literally enjoyed a free hand. I say this because sexually too the harassment assumed hitherto unprecedented forms.

By now some colleagues had turned into friends and I mustered the strength to talk to them about my daily harassment that they had seen and known anyway. Their empathy brought me around to lodging a formal complaint with the Managing Editor.

Meanwhile, Joshi tried his last ploy. He asked me to resign, ostensibly because I was not quite ‘fitting the bill’. A spectacular turnaround, this, especially since he had been praising my work in private and public all along.

I managed to get an audience with the Editor about two weeks later. Initially, I could not bring myself to speak about the sexual harassment and wondered how exactly to begin. Soon enough, though, I discovered that Joshi had already confessed to his boss every explicit detail of this sordid affair. The Editor spoke to me in a very apologetic tone, sympathising with me and almost making me feel as if the ordeal was over. But he took my breath away with his final advice: that I settle for a ‘compromise with Ishan Joshi’.

I had reached the end of the road. I was given a month to resign voluntarily, but refused to comply. I certainly did not want to compromise. I had given 15 conscientious years to the profession and knew my worth well enough to refuse to budge from my principled position. I was determined to fight back, but I could see there was little else for me to do within The Statesman. My services were finally terminated on 12 October 2002, with no reasons cited and not even a day’s notice.

The first two weeks felt strangely liberating, but depression hit home by the third week. I was publicly molested and lost my job without being able to do anything about it. My professional reputation lay in tatters and my husband still did not know what had happened. My depression got the better of me, leading to severe medical complications, exposing my husband to the truth and setting forth the chain of events that led to my recovery.

I contacted Lifeline, an online counselling service, which in turn led me to approach Sanhita, an NGO specialising in sexual harassment at the workplace. The latter helped me get in touch with the Bengal chapter of the Network of Women in Media, India, and its coordinators Rajashri Dasgupta and Ananya Chatterjee. I spoke to my former bosses and colleagues. My immediate boss, the Chief Reporter, expressed sympathy, but pleaded helplessness and warned me against taking on someone like Ishan Joshi with a formidable genealogy and a family with considerable political influence.

However, for every negative response, there were hundreds of encouraging overtures. The Class IV staff at The Statesman have supported me as much as some of the senior-most editors, finance, accounts, technical and other professionals. My written complaint was immediately followed up by the NWMI Bengal, eliciting a stinging reply from the Editor questioning their authority to speak for me. Posting the news on the internet ignited public outrage, and support was pledged by several media personnel, male and female. The resultant negative publicity probably forced the institution of a sexual harassment committee by The Statesman in both its Kolkata and Delhi offices, a first for a media house in both cities.

My case was represented to the West Bengal Commission for Women, which directed The Statesman to investigate the case—to no effect. Meanwhile, I also approached the office of the Commissioner of the state’s Labour Department challenging my illegal termination. However, The Statesman refused to co-operate with conciliation proceedings at the Labour Commissioner’s office, and as per procedure, my case was transferred to the Industrial Tribunal for adjudication.

Since this was a one-off case, a rare case of sexual harassment leading to illegal termination, it proved near-impossible to get a lawyer to take it on. Senior lawyers were unwilling to handle a case that was not only difficult, but without precedent. This was when an activist friend helped me get in touch with the legal aid NGO, Human Rights Law Network. Thanks to HRLN’s Director, I managed to get a bunch of enthusiastic young lawyers to argue my case.

Making the rounds of courts was another harrowing experience. The dingy, dusty, depressing setting of an Indian court can make any complainant feel worse than an accused. Once a case enters a court, thanks to our judicial system, it can go on forever. Mine was no exception. For the first few months, their lawyers kept on postponing the hearings on various pretexts. Still more time was consumed by vacant courts. (‘Vacant’ refers to the status of a court of law when a presiding judge retires and another is yet to move in; during the intervening period, cases lie pending for want of a judge.)

Between 2004 and 2013, I lost more than three years due to the transfer or promotion of different judges. Speaking up against a frustrating system can also work against a complainant. As a result, I have had to contend with two defamation suits—one civil and another criminal—filed against me by Ishan Joshi and The Statesman in Kolkata and Delhi respectively. This has meant shuttling between two cities and three suits, leaving me little time for work.

The Statesman and its lawyers did their ponderous best to stretch the cases out until a judge had to leave on either promotion or transfer or retirement, leaving us high and dry for months. In fact, the moment I received an order in my favour, they appealed to the High Court against it. This made me lose precious time, although the High Court subsequently ruled in my favour.

Victory finally came on 6 February 2013 when a judgment in my labour suit against the management of The Statesman, Kolkata, was delivered in my favour by the Industial Tribunal. I was awarded reinstatement with full back wages from the time of my termination in October 2002. Of course, I still have a long way to go. The Statesman has challenged the judgment by the Industrial Tribunal at the Kolkata High Court. I have not yet received a single penny of the compensation and back wages due to me. The defamation suits too remain unresolved. I only hope 2014 proves a little more favourable in this regard.

A few observations on the lessons these years have taught me.

One, women professionals have both supported and questioned my credentials. Just as some wonderful women from the NWMI and HRLN supported and helped me legally, there were others who trashed my professional competence and rubbished my complaint. At the same time, there have been male colleagues who offered support and guidance.

Two, beyond the initial support, one must go it alone. Whether it is meeting the police, the Women’s Commission, or one’s lawyers, one has to balance one’s profession, family, fellowships and legal disputes with the finesse of a trapeze artiste.

Three, few will be ready to offer you employment the moment they realise that you have dared to take on a previous employer on sexual harassment at the workplace. Although I have continued to write as a freelancer, my options have dwindled drastically at the workplace.

Finally, I am grateful for the promptness with which the Kolkata Police and Women’s Commission responded when asked to testify in court. I particularly admire the commitment and enthusiasm with which my young lawyers managed to win favourable orders in a row, ultimately clinching a judgment in my favour. I applaud their approach to my case as an instance of ‘human rights violation’.

About the future of the media, I am not so sure. I do hope, though, that alternative media may yet bring back the spirit of independence that once characterised journalism and made it a noble profession.

As told to Anirban Bandyophyay