When she goes out with her Indian husband, she’s taken to be a foreign prostitute. When they holiday in Goa, they’re busted for drugs. Yet neighbours line up to meet her, coolly ignoring her husband. The curiosity of what it means to be a white woman married to a brown man. 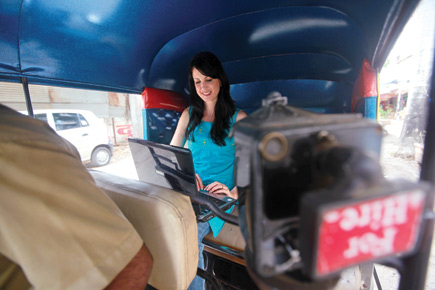 The curiosity of what it means to be a white woman married to a brown man.

What you wouldn’t expect is for me to be married to an Indian guy—a guy who’s shorter than me, and dare I say it, doesn’t come from a wealthy upper class family. Then, when you found out, you’d probably find it hard to comprehend.

How foreigners are regarded in India is a curious matter. Our white skin, and the belief that we have power and money, unwittingly elevates us to the top of the social hierarchy. Doors will open for me in India, while at the same time remaining closed for many Indians. Shop assistants will beckon for my attention,while ignoring other potential customers. Everyone wants to have a foreigner for a friend. I’ve lost count of how many times my neighbours have knocked on my door, asking me to meet every relative who visits them. They’re not interested in my husband, though.

However, actually having a relationship with a foreigner creates a completely different scenario. Again, perceptions come into play. A whole complex range of them. Foreigners don’t take marriage seriously.  Foreigners don’t have good values. Foreigners can’t cook and manage a house. Foreigners could never adapt to the Indian culture. And then there are the perceptions about the relationship itself. Love marriage is improper. Love marriage with a foreigner is even more objectionable. What will the community think? Our family will lose respect. Our family will be brought into disrepute. The marriage prospects of our other children will be ruined.

Thus, having a relationship with a foreigner is strongly discouraged in Indian society.

The first inkling that my relationship may be perceived as anything but conventional came when my husband (who was my boyfriend at the time) and I started travelling around India together. He told inquisitive strangers on trains that I was a family friend. This perplexed me. Why hide the fact that we were together?

I soon discovered that the truth would only prompt a host of new questions, judgments, and even disapproval. Up until then, my relationship had felt normal to me, as it would at home. However, this was only because, as a newcomer to India, I was ignorant about the intricacies of Indian society. In addition, my husband was living in a separate city to his family, and working in an industry that attracted a diverse and cosmopolitan crowd. The people that we associated with were progressive, open-minded, and well-travelled. What they thought wasn’t an issue. However, what Indian society in general thought, was.

Hence, my husband was reluctant to tell his parents about me. “It won’t be a simple matter of them agreeing that we can get married,” he told me. “We may never even be able to live in the same city as them.” It sounded severe. I returned to Australia, while he moved back in with his parents to convince them about us.

The day I met my future in-laws was terrifying. I dressed in traditional clothes, spoke as much Hindi as I could, and sat on the floor and ate with my hands. But they seemed to like my unusual appearance (tall, dark hair, pale skin, and blue eyes) most of all. “Just like a model”, they exclaimed. “Like a doll!”

Indeed, it’s my appearance that’s been both a blessing and a curse in India. While, people seem more open to accepting me based on how I look, they’re less inclined to believe I’m married to my husband. I can read the expressions on their faces. Usually, it’s something along the lines of ‘why would she choose to marry him?’

My husband is neither loudspoken, nor imposing. As a result, he often gets mistaken as my guide. I  remember one day, I was shopping at a stall at the Colaba Causeway market in Mumbai. My husband, who’d been looking at something else, came up to me and asked how I was going. The stallholder turned to him, and roughly told him in Hindi to go away and not interfere in the transaction.

Surprisingly, the perception is even worse in a seemingly liberal state like Goa. I’ve been there with my husband twice now. Both times, we had senseless encounters with the police. An Indian with a foreigner immediately arouses suspicion, it seems. On the first occasion, we were staying in Anjuna. As we were leaving our room one night, we were approached by a group of three undercover policemen. They pulled my husband aside and started questioning him in Hindi. Their questions consisted of the typical “What are you doing here? Where are you from? Who is she? Why are you with her?” I was too stunned to say anything.

Two of the policemen went and searched our room for drugs while the other remained with me, and started questioning me. And then, the policemen’s true intention was revealed. “If we find drugs in your room, we’ll put him in jail. How much are you willing to pay to prevent that from happening?”

On the second occasion, my husband and I were travelling in a car with a group of expat friends. We’d had dinner at Baga Beach and were all on our way back to our hotel, the Taj Vivanta in Panjim. The police had set up a nakabandi on the road from Baga Beach. Seeing my husband in the car, they asked us to pull over. “Where are you going?” they asked.

Our reply that we were heading to our hotel  wasn’t good enough. The policeman told my husband to get out of the car, and took him to the side of the road for further questioning. This time, anticipating what was coming, I also got out of the car and abruptly told the police in Hindi that he was my husband and  demanded to know what the problem was. I stood there with my arms crossed, and glared at the policeman. (And yes, I was taller than him too). He glared back. Finally, “kuch nahin,” he said. And that was the end of the matter. I won. My husband and I laughed about it, but underneath I resented the situation and the fact that I had to take control of it.

Yet, this isn’t the worst. There have been other occasions where my husband and I have visited the hotel rooms of male Indian friends staying in Mumbai, and it’s actually been inferred that I must be a foreign prostitute. The hotel staff did their best to prevent us from going to the room. Though I try not to let it bother me, people’s reactions do upset me. I’m sadly reminded of the inequality that exists in India. I see my husband as my equal, and I wish that other people would as well. These days, I often feel guarded about my relationship. The innocence I once had about it has well and truly gone. My husband jokes that if he was taller and had a moustache, he’d be taken a lot more seriously. But would he?

If people can look past their initial perceptions, past the skin colour and height difference, they will notice that my husband and I are both human beings. There is no need to view us differently, or treat us differently. We too are in fact just a happy normal couple, like any other. I hope these perceptions will finally change when we have children. Let’s see.