The Revenge of the Mithun Fan

After his book on Disco Dancer described Mithun Chakraborty’s acting the ‘worst ever’ in Hindi cinema, Anuvab Pal got a letter from a certain Mimoh. Who took revenge in a way that can only be called ingenious 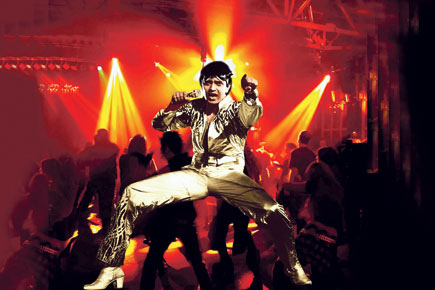 After his book on Disco Dancer described Mithun Chakraborty’s acting the ‘worst ever’ in Hindi cinema, Anuvab Pal got a letter from a certain Mimoh. Who took revenge in a way that can only be called ingenious


A couple of years ago, I wrote a book on the film Disco Dancer. Its purpose wasn’t so much to praise or criticise the 1982 film and/or discuss its hero Mithun Chakraborty. My goal was to understand the genius of its screenplay. I put in some reviews of the time that suggested his acting was the worst ever seen in commercial cinema. But that wasn’t my focus. The focus was the story.

We’d had man-against-the-system stories in Bollywood throughout the 1980s, and the stories were more or less the same. A man (always poor) is angry at the system (the system, always rich, was usually played by a wealthy Amjad or Kader Khan). System does harm to man (frames and kills father, rapes mother). Man beats up villain and destroys evil system with the help of an innocent girl/love interest. A god makes a cameo to signify his approval. And, as a general rule, alcohol and tobacco are portrayed as avoidable.

Never in the history of trying to promote good morality in 1980s Bollywood did any script use pelvic thrusts as the modus operandi of achieving the impossible.

This is how the story of Disco Dancer went. A young slum boy’s mother is insulted by a villain. The boy restores his mother’s honour, becomes wealthy, defeats his disco dancing nemesis. Till the villain has his mother electrocuted by a guitar. The Disco Dancer develops guitar phobia (he passes out when he sees one). Eventually, he gets over it when his coach throws a guitar and sings his childhood song, which motivates him to destroy the villain through a disco number.

In terms of how funny that is: Austin Powers, the billion-dollar Hollywood comedy franchise, as a one-sentence pitch on IMDB, reads: ‘a secret spy cryogenically frozen in the 1960s returns to the present to fight evil mastermind Dr Evil, aided by a midget version of himself.’

Somehow that sounded less funny than the Disco Dancer premise.

Having written essentially two independent film scripts, I had no idea that humour in mainstream Bollywood meant something else. It meant people slapping monkeys, being bitten by crocodiles, dropping towels and so on. Essentially 16th century restoration comedy stuff. The fact that someone disco dancing for revenge could be seen as ironic didn’t make much sense.  The idea was too western. “What’s the joke?” asked a fan. Before I could explain that the protagonist is a man in a silver suit thrusting his groin to restore family honour, The Times of India ran a review that said Disco Dancer needed a more serious chronicler.  Someone posted a review on Twitter that essentially found the idea of making fun of a commercially successful Bollywood film wrong and elitist, citing my own work as too small and niche to have any authority to judge this great classic. The review said ‘How dare this be called funny’ and then had a clip of Karan Razdan (playing the rival disco dancer) doing a fake bull-fighting dance move (by which I mean, imitating a bull and then immediately rolling around the floor).

Many in India’s urban upper middle-classes couldn’t understand why one would waste time writing about this movie, which they considered not very good in the first place. Between them and those who took offence, no one could see the joke.

Then came the email.

I received an email from mimoh.chakraborty@yahoo.com (whom I knew to be an actor in a not very well received commercial film called Jimmy). It was sometime in 2011 and it said this:

‘My father is a real man of the masses and the classic rags to riches story. I know of the innumerable banter and jokes that are made at his expense but can you seriously question his acting abilities? Apart from the national awards, his ability to churn box office collections at will in the 80s was not something many could boast of.’

‘I will tell you the real reason for this. My father is by no measure a polished man, having limited access to elite education he certainly does not possess the offscreen persona of stars like Mr Bachchan and even Mr Khan. One of the reasons for his success was that common people could see him as their own and that is an inherent nature of his personality. However that is where the majority of the country is and they contribute to box office successes.’

I felt really bad. I didn’t really want someone’s family to be offended by a work unrelated to them. This especially from someone who was gracious and kind on email and said he enjoyed my writing.

So I wrote this in response:

Thank you for your email and thank you for supporting my writing. I would like to mention that my book on Disco Dancer had absolutely no desire to question Mr Mithun Chakraborty’s acting skills. If such was derived from the reading, it is unintended and I thoroughly apologise. I am, and continue to be, a fan of his, and even though I am aware of elite India’s prejudices about certain movie stars, based solely on artifice and westernisation as you correctly point out, they were in no way supposed to be reflected in the book.’

‘He has given me (and my generation) some of our best memories of movies and it would impossible to think of an 80s India without him. In fact, his interview was the most insightful and he said, in that last answer, things about why I was writing the book, and about my effort to hold onto some nostalgia, which was the cleverest thing anyone said to me on this journey.’

I’m not sure I meant what I wrote. But out of polite nervousness, this seemed the thing to do. Now as an elitist urban Indian or whatever I was accused of, I realised, maybe I didn’t really know his work. Maybe his version of Saturday Night Live or his Indian James Bond (he played Gunmaster G9) deserved respect rather than irony. He had won a national award for a great Mrinal Sen film, he had played street urchins and poor people who seek justice and revenge and equality (whether vest-wearing or disco-dancing or gun-wielding) while exposing the hypocrisies of the urban elite. Maybe I should be sorry.

I decided I would look at his fan base and see what had changed. It was a different country from the one where he was the poor man’s hero. The obvious things—the passage of time and age and irrelevance played its part. I spoke to the single screen demographic—auto drivers, petty gangsters, dock workers, cooks and delivery boys. I also spoke to the urban multiplex folk—young iPhone wielders, housewives, teenage lovers, middle management. I discovered several things. Many among the urban elite didn’t know who he was. What had changed essentially wasn’t his honesty (his character was always the poor innocent tricked by a treacherous world) but us. We were more cynical, urbanised, ironic, young, impatient and westernised. There were more of me than my Twitter critic, it appeared. In the single-screen bracket, his following had almost entirely been transferred to Salman Khan, who was sort of like a better built, post-Liberalisation, 21st century new-age man of the masses, with a newer vest.

In Kolkata though, he still remained the people’s hero. Sort of a reinvented Rajinikanth. Asking the hard questions of society, fighting the impossible fights, outdoing the much younger competitors surrounding him.

Just then, I received this email from mimoh.chakraborty@yahoo.com:

‘I am having a get together next saturday the 10th of March. I have invited some friends and I am told that you are acquainted with most of them. Would be lovely if you would come. My father will be there.’

The location was the ITC Hotel near the International Airport in Mumbai. Peshawar, which I knew to be an expensive kebab place. I thought, ‘Great, an opportunity to sit and resolve any differences between me and the family once and for all’—unless they shot me or beat me up, which, for a little book no one had read, didn’t seem worth the effort for these famous people.

I showed up at the appointed hour. There were no reservations. If him or Mimoh were there, people would have recognised them. There wasn’t  anyone there who looked like them. Not knowing what else to do, I asked for a table. I sat there, a bit embarrassed, but out of options, treated myself to an unnecessarily lavish, obscene dinner. Alone.

No one showed up. No cellphone numbers had been exchanged. It struck me that I had no contact except this email. Several thoughts went through my head. Was this a set-up? Did they get stuck somewhere? Maybe there’s a genuine reason. Or, did mimoh.chakraborty@yahoo.com have nothing to do with the son of the movie star?

I thought Twitter would be a good place to check. I looked up Mimoh Chakraborty. It said he was watching The Descendants.  Understandably, I was in no position to ask him anything. Where would I begin?

If it was him, he had planned this. If this wasn’t him, why make him aware of the book and what it said about his dad? I thought best to just let the moment pass and move on with my life.

Three months later, I received an email from that sender. It said, ‘I hope you spent a lot of money and were embarrassed. It serves you right for making fun of a legend.’ It was signed, ‘A fan.’

Regardless of whether I was embarrassed or managed to catch up on a really good meal, real Mithun Chakraborty fans were clearly still out there. And they’d go to any length to keep the legend alive.