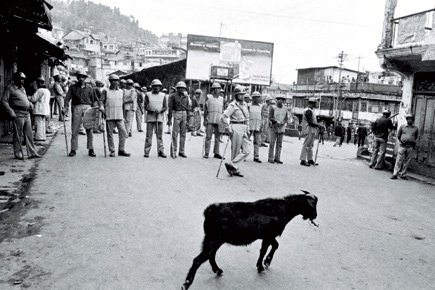 
As a child, just as the sun would start its nightly descent, I would stand by the gate of my house on Fridays, transfixed by the sight of animals in procession. Bulls, goats and pigs, tended by their masters, would march in neat formations. They would take the road outside my house to reach the bazaar, and later the abattoir. I don’t know how, but I had come to learn that they would all be slaughtered the following morning, just before the weekly market day. I must have been between three and four years old then. But now when I sit down and try to gather my earliest memories, this procession and this knowledge that the animals were walking to their death comes back again and again, as clear as if it were only yesterday.

When I did visit the abattoir the following morning, I would find traces of these animals. A few shreds of meat, a discarded horn or hoof, some blood accumulated in the road’s pockmarks, a carelessly-strewn cleaver. So there I would be, standing outside my house, as the animals went past in solemn obedience, wondering why it was that not a single animal ever escaped. Why, upon seeing the butcher, at least one did not run in the opposite direction.

One day, I saw someone come from the other side. Let me recall that day more clearly. It is sunny and hot, probably afternoon, and there is not a soul on the street. Except for this man ambling and collapsing on the road. I am not standing by the gate. I am peering through the curtains of a window reinforced with heavy blankets. Except for my infant sister and me, there is no one else in the house. When I look at the man closer, I notice that he is a policeman, dressed in a uniform very much like that of my father. And on his bald head, from the nape to where his eyebrows meet, is a deep long gash, as though someone decided to give him a middle parting. He walked and crawled like that, with his head opened up. In between his incoherent mumblings, I could make out that he was asking for water. I saw many window curtains stir, but not a single door opened. He walked and crawled like that until I couldn’t hear or see him anymore. I later learnt that he eventually reached the door of an old Tibetan woman who offered him water. He died thanking her.

Kalimpong, once an important trading hub between India and Tibet, has in the past been under the rule of various regimes—of Sikkim, Bhutan, Nepal and finally British India. In 1962, during the Indo-China war, blackouts were common and a number of Chinese residents were deported. Jawaharlal Nehru described the town as a “den of spies” then. Apart from that, Kalimpong had remained largely peaceful. But in the 1980s, especially between 1986 and 1988, as demands for a state of Gorkhaland grew, skirmishes between the government and dissenters rapidly spiralled out of control. Paramilitary troopers were called in and the dissenters fought them with pipe guns, home-made bombs and Molotov cocktails. There was also talk of more sophisticated weapons being used.

The nights turned noisier, the roads became out of bounds, and the screech of car wheels outside your home made your heart grow cold. If you ever ventured out at night, you could see sparks of gunfire in nearby hills as if they were lights on a Christmas tree.

Prior to 27 July 1986, skirmishes were few and far between. On that date, a large demonstration was taking place in Kalimpong town. It is unclear what served as the immediate cause—the police claim they were attacked first—but what is certain is what transpired next. The police started firing indiscriminately, and 15 people, many of them women and children, died on the spot. A few succumbed to their wounds later. There was no stopping the agitation in the hills from then on.

According to the book Gorkhaland Movement: A Study in Ethnic Separatism, 283 people were killed between the years 1986 and 1988. But these are based on official records, and the truth might be a few multiples of that number. Houses used to be raided and locals randomly shot. An elderly Tibetan tailor who spoke only Tibetan and a smattering of Nepali was a neighbour and family friend of ours. He was shot in one of his knees as he was crossing the road at night. Sometimes, victims used to be schoolchildren. The town hall where we watched plays and dance shows was used to interrogate and torture suspects. Television sets—which were owned by only a handful in the town—would be smashed on the pretext that they might contain hidden ammunition. A whole bazaar in the nearby town of Manebhanjan was set on fire. Monasteries were not spared. In one instance, when the CRPF raided a monastery at night, they found it filled with tormas. Those who are familiar with Tibetan Buddhism will know that tormas are butter sculptures used as offerings to God. The troopers didn’t know that. They told the monks, “Din mein jama pehenta hai, aur raat mein bomb banata hai.” (By day you wear frocks and by night you make bombs.) The monks had to eat the tormas to show that they were not explosives.

My father was a policeman then, and the houses of all policemen were targets. Many went away. One of my close friends, also the son of a policeman, and his entire family relocated to a nearby city. We stuck on—my young mother, grandfather, infant sister and me. My father was posted in other troublesome parts of the hills, but not in Kalimpong. Sometimes in the dead of night, I would feel his warm hand on my face. I would wake up to find him home. He sneaked in, I suspect, to reassure himself that no harm had befallen us, especially my sister who was only a few months old when the agitation started. When we pressed him for details, he would tell us funny stories, even when some of them had a frightening undercurrent. On one occasion, he was given a wireless set, a jeep, seven CRPF personnel, a few sheets of full-scale paper and carbon sheets and told to take over a police station. The entire police station had been burnt and its staff killed just the previous day. When my father pointed this out, he was given a tent and told to convert that into a police station.

Curfews and strikes were continuous and indiscriminate. Fresh food was hard to come by, and we had to stock non-perishable commodities like potatoes and rice, eating them for weeks on end. Every night, we’d make our beds, but sleep on the floor, lest a bullet hit us. It did not come as much of a surprise when my father discovered on one of his visits home a bullet mark on one of the walls. From then on, we were doubly careful. Doors were reinforced with furniture, and all windows were draped with curtains and blankets so that no one could see us from outside. After our neighbour was shot in one of his knees while crossing the street, our nightly visits to the toilet outside the house were barred. That’s how we lived those few years.

What is memory but a collection of seemingly random incidents? Why is it that so many fall by the wayside, yet we retain some with such clarity and precision? I suppose it is because memory is rooted in feeling. Fear, love, anguish, whatever the feeling, collects these episodes and holds on to them. I can’t describe what I precisely felt that day even now. I was too young to identify what a particular feeling actually was. But I remember that morning like it was yesterday. My mother was walking me to preschool. It had not even been a week since I had started classes, and unlike others, I actually liked the feel of a school. In that week I had also learnt that the initials of my preschool, Toddler’s Preparatory School, were spelt, by some, as Tatti Pisap School. And as I walked, my hand in my mother’s, there it was, hanging on the lamppost in the town square, inside a polythene bag, surrounded by a crowd of people—a human head. My mother tried to shield my gaze, but I saw it. It had turned a purple-blue in the morning chill. And whoever did it understood the nuances of a public show. The head’s lips were painted red. Its hair was neatly combed, and its face was powdered. It took a while for policemen to come and get a ladder tall enough to bring it down.

It turned out to be the head of a teacher and a suspected police informer. Immediately after, a rumour started gaining ground—the agitators had declared that, once a week, a lamppost in town would have the head of a police informer. As promised, a second head appeared, and—my memory fails me here—perhaps also a third. The locals began to joke that this was as regular as a weekly TV serial.

This went on for some time until peace was declared in August 1988 with the formation of the Darjeeling Gorkha Hill Council. The agitation had not resulted in a new state but a semi-autonomous body that would control the administration of the hills. Everything returned to calm. The streets reopened, the shops started doing business again, the lampposts had only lamps, and the agitation became a subject of fireside conversations.

Many years later when I visited Delhi, I went to the Indira Gandhi Memorial Museum. In one corner of the room, among so many pictures and personal artefacts, I saw a picture of Rajiv Gandhi by his mother’s burning pyre. A part of the caption read something to the effect that even while he was lighting his mother’s pyre, the Darjeeling Hills were burning, and he was thinking of what would happen of India. All of what we went through, our fear, our anguish, our sufferings and our loss, my childhood, reduced to a phrase in a caption to emphasise a leader’s great suffering.