The sadness, confusion and fear one felt as a young child never does go away, realised Saaz Aggarwal as she walked the corridors of the boarding school that was once her ‘home’ 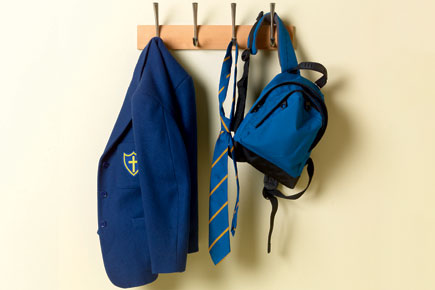 The sadness, confusion and fear one felt as a young child never does go away, realised Saaz Aggarwal as she walked the corridors of the boarding school that was once her ‘home’


I was 40 years old when I went back to Nazareth. We drove up the hill and the thought struck me that this was an ideal location for a convent— secluded, and surrounded by natural beauty and pure air. But my chest was heavy and my breath uneven as we drove through the unguarded gates.

It was 34 years since I had last been here, but nothing seemed to have changed. We stood in the courtyard and the air was still faintly scented with eucalyptus, interspersed with mild hints of sewage that wafted in on the fresh breeze—just the way I remembered. It was the same yellow building with brown window frames and balustrades. The odd bird chirped in the background. Slowly, I climbed the wooden flight of stairs leading up to the flagstoned verandah that encircled the building. I clutched myself, reluctant to put a hand on the wooden rail which, I noticed, had been polished to a lighter, brighter brown than it used to be. There was nobody around.

Walking to the front of the building, I tried to peer in but the curtains were drawn. I would have liked to see whether the dormitories looked the same too—but really, all I had to do was close my eyes and I’d be back in there. One was a long, thin room with a row of cots placed next to each other from one end to the other, with a chair between each. The other was a hall with rows of beds. I remember lying in my cot at night, everyone fast asleep, utterly miserable and wanting nothing but to go home. The wind whined through the trees and rattled on the stained-glass window panes. It was a ghost—of course. It was heart-liver-kidney, the famous heart-liver-kidney, and it had come to get me! Instead of risking a trip to the toilet, I would ease my bladder right where I lay. But in the cold Nilgiri night, the sheets would soon turn icy and I would be shivering for more than one reason. The ayahs hated me, and I remember trying to stealthily obliterate the messy puddle, mopping it with the floppy brown bloomer that was part of our uniform.

It was a weekly ritual to write a letter home; a day and time was set aside and it was compulsory. In my first few weeks, I suppose I was writing letters which expressed my desolation and begging my parents to come and take me away. I suppose the school authorities frowned on such subversive communication. All through my life, until email weaned the writing habit, I had something in me that made me start every letter with, ‘How are you? I am well and happy.’

Sitting in class, I often excused myself to go to the toilet and walked instead to a grassy bank from which I could stand and stare at the gate just in case my parents happened to be coming to visit me. In those days, my father worked in the Annamalais, a six-hour drive on steep, winding roads that could make a sailor ill. This was the reason I was away at boarding school—there were no schools near us. No hospitals, either—my brother was born in the guest room of the manager’s bungalow at High Forest Estate (Mudis PO).

On one miraculous occasion, our little red Herald did indeed drive up the hill and come through the gate as I stood and waited! I was so surprised, so ecstatic and disbelieving, so completely overcome with emotion and shyness that I ran away and hid. I suppose my parents were just as dismayed, confused, and unhappy. To my everlasting regret, they waited for a while for me to come back and then left.

Returning to school from vacations was the most desperate trauma of all. As we drove up that beautiful hill, my heart sinking deeper and deeper into the ground, we passed a house that had a scarecrow on its terrace. It was a lumpy creature, all stick and rope, wound round with an old banian and bony arms poking out at right angles. Whizzing past, my dad would point at it and jovially call out, “Look, Jesus Christ!”This was part of our routine, and though I knew it was funny, I only felt a horrid stab of disloyalty, and guilty fear that the nuns would find out. I wished my dad wouldn’t make jokes about someone as wise and wonderful as Jesus.

The feeling of deep sadness never left me. I’ve been told that I would wail and scream loudly for my mother, father and brother; my brother, then three years old, would occasionally advise our parents that I must have become one of the big girls by now so they should probably go and bring me back home.

One day, sitting alone on the floor of an empty classroom, feeling wretched as usual, I played with the screw of my earring. It was a link with my mother and rolling the screw back and forth consoled me a little. It was she who would carefully remove and clean my earrings every time I went home for the holidays. I would lie with my head in her lap when she did so. Other times I would lie like that and she would peer into my hair checking for lice, groaning in despair as she pulled each one out and killed it with a sharp ‘tick’ between her thumb nails. Head lice were not the only infection I contracted. I spent pretty much all of my second year in the school infirmary—from where I was fortuitously sent home three times, first with measles, then chicken pox, then jaundice. The jaundice was diagnosed after I had vomited three times, after three consecutive meals. The third vomiting episode also gave me an image of myself at age six which would form a metaphor for my childhood: sobbing under the long wooden-slat dining table, trying to pick up my vomit with a fork. The ayahs had been insane with rage and insisted I clean my dirty mess myself.

Sitting on the classroom floor that day, I twirled the stud in one ear, and its two separate parts suddenly came loose and slid to the floor where they rolled giddily to a gap between two wooden planks and slid neatly through. The old Ooty buildings are built on pits dug in the ground and the wooden planks often creak when you walk. In the middle of the darkest night, most likely it was the fearsome heart-liver-kidney foraging for its next meal!

Squinting between the floorboards I could see the two bits sparkling up at me. In a daze, I started rolling and playing with the stud in my other ear. Very soon it had fallen down and rolled into the gap too. I could see them there but they were out of reach and it never occurred to me that I could ask someone to help me get them out. Even when my mother came to take me home next and saw with shock that my gold earrings had disappeared, and assumed them stolen by one of the villainous ayahs, I didn’t have it in me to explain.

Forty years old now, I walked around, looking for someone. The verandah ran the length of a large hall. By now, I was determined to get inside the classroom where I had dropped my earrings. But all the doors leading to the hall seemed to be locked shut. I continued walking until I was right outside the classroom in which I had dropped my earrings. From the windows I could look right in. What a surprise to see that it now had a shiny tiled floor! Perhaps someone had seen my earrings glinting through, and decided to pull up all the wooden boards, excavating further for more gold. Perhaps they had never been found; swept away in the construction debris when the flooring was replaced. In any case, after 34 years I had to finally face the fact that my gold earrings were gone forever.