Bollywood loves shooting in Ladakh, and Odpal George makes it possible. He shares all about the crazy demands directors make, and the life-and-death crisis that befell the shooting of 3 Idiots in this cold desert 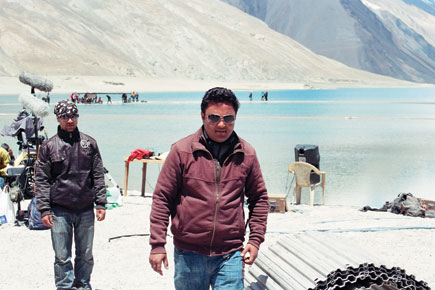 Bollywood loves shooting in Ladakh, and Odpal George makes it possible. He shares all about the crazy demands directors make, and the life-and-death crisis that befell the shooting of 3 Idiots in this cold desert


Anybody who has seen the movie 3 Idiots will remember the final scene where Madhavan, Kareena Kapoor, Sharman Joshi and Omi Vaidya (Chatur) finally find their long lost friend, Aamir. Notice the location this reunion was shot in? It was Pangong Lake, Ladakh. Now, switch to a recent Coca-Cola advertisement where a young man is trying to find his way back home to Delhi for Diwali. Location: again, Ladakh. Now meet the man who made these and many other scenes possible.

Odpal George used to work in the tourism industry, but in 2001 started his own company, Himalayan Safaris, to enable the shooting of films and commercials in Ladakh. He is now the one-stop-shop for anything to do with the visual media and that scenic location. But, how did it all start?

“I worked in different companies for around eight years, but I always felt like ‘this is not working out, maybe another company is better’. So, after a while, I decided to start my own company,” says George.  Around the time this decision was made, George happened to be in Delhi, and that too at one of the high-profile parties in the city. “At the party, I overheard people talking about JP Dutta. Interested, I asked what the problem was. They told me about an upcoming shoot in Ladakh that entailed a lot of logistics including food and lodging. I told myself that in any case that’s the kind of work I was already doing in the tourism industry and I should be able to take it up.”

But then, “there were so many people who wanted the job. I went to office, Googled him and called his house. I used to wait until nine at night when STD rates are lower, and then call. Finally, I spoke to Dutta’s wife. She got me in touch with the production manager and told me that to do the work, I had to get out of Delhi and into Ladakh. I told her I would call her from Ladakh. It was quite an experience for me to get to Leh.”

And ‘quite an experience’ it certainly was. On that very night, he went around borrowing money from his friends, telling them about the JP Dutta film, and bought his ticket to Leh. On getting there, he called JP Dutta and told him he was in Ladakh. He then borrowed more money and set up his office there, along with some of his friends, “and somehow started off with LOC Kargil”.

There were other teething problems besides financial issues. “It was quite a challenging job, unlike handling any travel/tourism project. It’s a job where you need to be on your toes all the time. We had a crew of 150 to 200 people, and handling them was 24 hour intensive. With tourists, you tour with them and then they go do their own thing. But here, khatam hi nahin hota hai…(it never ends)”

But he loved it, and from then on his association with the film industry grew. “People would get in touch with the producer or director, asking ‘Who did you work with in Ladakh?’ They would give my name, and these people would come to me.”

Being low on funds, George didn’t advertise, but got around that problem the old fashioned way—PR. “After my job with JP Dutta, I went around meeting some producers and directors in Bombay. But after a while I realised that the market is too big for one to go about meeting everybody. I went to a famous studio and met a couple of  people and asked them if there were any more production people I could meet. They told me there were 200-250 offices within that building itself! Then my strategy changed—If they want to come, they ought to get in touch with me. Whether I get the work or not is my luck.”

And come to him, they did. He has now worked with a large number of companies and directors, both Indian and international. Hero Honda, Maggi, Bajaj Eliminator, Castrol, Hindustan

Petroleum and Cadbury are some of the companies he has worked with. Bollywood, too, has been appreciative of his work, coming back to him for movies like 3 Idiots, Waqt, The Forgotten Hero and  Heroes. He has worked with directors like Shyam Benegal and Rakesh Mehra. Ladakh, beautiful as it is, has attracted various foreign directors too, notably Ron Fricke, who shot parts of Samsara there. His big dream is to get that one breakthrough Hollywood deal, he says, that he has been negotiating for a while now.

“A line producer’s job never is easy going,”  says George. One of the most challenging tasks invloves dealing with incredible requests from directors. “Ever so often, their requirements are, you know, ad hoc and impromptu. Something you were never prepared for, they’ll demand that.” The Coke ad is a good example. “The bus in the ad looked so beautiful only when it was fully lit (with a lot of decorative lights). We had those strings of little bulbs all around the bus—each was about 50 watts. So, the total power needed was adding up to a lot. We could not get a sleek portable generator put inside the bus. One option was cabling the bus and plugging it into a generator outside. The cameraman did not agree to this because he said one would notice the wire trailing behind the bus once it drove off. He insisted the generator be inside the bus. We didn’t know what to do, but finally we decided to use two local generators, the kind used to make ganne ka juice. So, we put those two generators inside the bus. The moment the generators would start, they would spew out lots of smoke. By the time the shoot was over, the people inside the bus were totally smoked and blackened.”

It gets weirder than that. One director even asked him for a location where he wouldn’t get either snow or mountains. “I was just left wondering why they’re in Ladakh at all if they didn’t want snow and mountains,” he says, amazed.

Apart from overly-imaginative directors, this example leads us to another aspect of George’s life: reconnaissance. “Reconnaissance is the most important part. Suppose I spend 20 days all over Ladakh, just photographing places. Even if I collect 5,000 photos I can never be sure if the lot is enough. For instance, a director shows me a script and says, ‘George, I need a barren landscape, with a road in the middle, and mountains all around. On one of the mountains, I want a small hut.’ Now who could have imagined such a request? In Ladakh, I do all the reconnaissance myself. And it’s quite an effort. For this Cadbury ad, they needed an overhead shot of the monastery. I had to go behind the monastery and climb a mountain to the top. It takes a lot of effort, and shows you how fit, or unfit, you really are,” he says ruefully.

In true businessman fashion, George has expanded his repertoire of services. “Now, for Bollywood, we’ve started doing catering and everything. I have also started stocking movie equipment, things that are expensive to transport all the way to Ladakh. The counterweights needed for the overhead camera weigh 330 kg and cost around Rs 40,000 to Rs 50,000 to transport through Bombay-Delhi-Ladakh. We have invested in such gear so people need not bother bringing them along—Reflectors, skimmer frames, etcetera. Unburden them, prepare yourself is the key.”

And Bollywood appreciates him for the effort he makes. He is working with the stars, after all. “While shooting, I met Aamir Khan and R Madhavan. In fact, Madhavan recommended me to a friend of his working on a Telugu film. So I’ve done a few Telugu and Tamil films as well.”

Odpal George is at the top of his game, but a line producer’s job in an unforgiving terrain is exacting. “The money is good, but the physically demanding recce, elaborate networking, and the need for prompt solutions to unexpected problems/demands of directors and stars, has ensured that this job has few competitors even now. There are only a couple of people in the same race. But I think it’s the small things that make a difference, and I know that,” he says.

During the shoot for 3 Idiots by the Tsomoriri Lake—about 220 km from Leh—a fierce snowstorm hit the 200 odd support staff and crew members. There was so much snow that their tents collapsed. The only option was to get everybody to Leh. “We had to cover a vast plain, covered with snow [with a blizzard raging around them]. We had to figure out where to drive. I considered turning back, but where would we go? Our tents were gone. So we drove on.” When the situation became truly dire, at close to zero visibility, George and two other men got out and trekked for around three hours trying to find a path. “Every now and then we would put road signs to signal the way forward. We couldn’t use flags, so we piled rocks as markers. Finally, we entered Leh at 12:30 at night,” he recounts. That night, Aamir and Raju Hirani sought him out to thank him and his team for saving the lives of the entire cast and crew.