On the Road, All the Time

For 16 years, Dipankar Sarkar has been living on Delhi’s streets. And he has fought the cops to claim his place under the sun 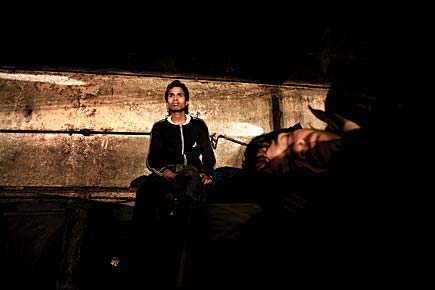 For 16 years, Dipankar Sarkar has been living on Delhi’s streets. And he has fought the cops to claim his place under the sun


I HAVE A long enmity with the police. I’ve lived on the streets of Delhi for about 16 years now, the last five out of a decrepit old tin trunk. There are others who’ve been living here for the last 60 years. We used to live in fear of the police earlier. But now, we are winning the war; at least we seem to have the upper hand. So far, we’ve already lodged ten FIRs against the police in their own stations. This, by far, has been one of the most rewarding experiences of my life.

My own father, ironically, was a constable in West Bengal. But then, he contracted a disabling spinal cord injury, and the force asked him to leave. My mother left us soon after—his operation had left us with no money. I saw no point in staying back either as there was no possibility of making a decent living there. So I ran away with a bunch of others, including my two brothers, to chart out a new life in a city. We set off for Guwahati, but eventually, most of us landed in Delhi.

I remember spending our first night on the platform of New Delhi Railway Station. We used the hay from some empty apple carts that were lying around as mattresses. The party didn’t last long. The cops came early in the morning to drive us away. I still get worked up when I think of how they treated us then. There was a time when the cops would take us to the station to sweep their place. Now I’d rather take a bullet than do it, even if the commissioner himself asked me to.

Ever since I became actively involved with our association, the Beghar Mazdoor Sangharsh Samiti, I’ve lost my fear of the police. I now fight for our rights as pavement dwellers. We’re not even treated as citizens, although the Election Commission states that you don’t need to furnish four-rooms-and-a-wall as address proof.

There are a good 5,000 of us in Delhi, the biggest squat being in Jamuna Bazaar. For the last 16 years, many of us have been living near the Hanuman Mandir in Connaught Place. It feels like home. If it were not for the bread pakoras they distribute here, we’d still be scavenging for leftover meat pieces from the garbage bins near McDonald’s, Wimpy’s and the five-star hotels.

Yet, it’s not like we love spending the night under the starry sky. We’re going to approach the Lieutenant Governor to ask for some space allotment, but first, we need voter ID cards for elections. For that to happen, we need a community to vouch for us, but so far none has done that. If that doesn’t work out, we’ll have to work towards it on our own. One of my friends has actually managed to save a significant amount of money—Rs 1.5 lakh—for a house of his own. I, on the other hand, tend to spend all my money on other ‘special’ needs.

I’m quite optimistic in life though. I know fate will surprise me some day with a jackpot in the form of a house. It’s not that I haven’t tried a life away from the crawls. I have a degree from ITI (Industrial Training Institute), which fetched me a job at a factory in Okhla. But my salary was not even enough to pay rent, so I quit immediately.

I was back on the streets. This time, I found a way to keep busy—drugs. I sniffed glue, I did everything except smack. Then, my brother fell ill because of drug abuse. His kidneys were completely damaged. That’s when I decided to give life another try.

I started collecting toll tax on a semi-busy highway in Chhattisgarh. But my body was already weak from the drug abuse, and I was unable to continue in that pollution-fraught environment and came back.

Then I did some odd jobs as a waiter at various parties. Even this didn’t last because of my somewhat warped sense of ego. The host had asked me to pick up a used napkin in front of the guest. I refused and told him my job was only to wash the dishes once everyone was gone. And that was the last job I did.

But what’s the point in finding a job? Why would anyone pay someone who doesn’t even have an ID proof? Some of our brothers have worked at restaurants for free. At the end of the month, when it’s time to receive wages, the employers threaten to report them for some petty snatching or theft. And the police lie in wait for that.

Not too far back in the past, they suddenly appeared at the mandir and dragged three of us to the station. Knowing rather well the weakness of the fresh lot of captives, the cops promised them plenty of cleaning-solution bottles to sniff if they confessed to a crime they’d never committed. It’s only now, after our efforts, that the police have become more careful about doing this.

I’m one of the more educated among our kind. Enlisting the help of NGOs, I studied at the railway station and managed to complete my Class X. I don’t see any such passion in the children on the streets these days. It really annoys me when some of them start begging on the roads when I’m actively trying to shed this image. We’re not beggars. What’s sadder is that I’m not even in a position to guide these kids.

I urge them to take advantage of the NGOs. Even if you show these NGOs the remotest spark or aptitude, they can make your life a whole lot easier. But instead, we have girls who become mothers at the age of 15.

I wish I could get the kids to learn some skills. For pavement dwellers, though, I think we’re quite talented. I’ve directed and acted in street plays that were performed at major political events, with the chief minister as part of the audience. My friend Arshad has even directed a movie. Funded by Action Aid India, he and four others directed, edited and acted in a film called Patri Par Bachpan. It went to many places, was screened at prominent gatherings, but ultimately didn’t achieve its purpose. Many businessmen and NGOs promised employment prospects for all of us; certain sums were also promised. But it was all on paper. In the end, nothing materialised.

Anyhow, things are far better now. There is uncertainty about food only if you’re too far from Bangla Sahib. No more fighting over morsels in garbage bins. Now we fight only to keep our sparse belongings from being snatched away or destroyed by the police. Why, just the other week, they came and thrashed some of us and threw our belongings out on the road. They even had the audacity to poke our women with their lathis. Most of us weren’t even there at the time to prevent them from snatching our mattresses.

Thank God we have plenty of large-hearted souls in this city who come around regularly and drop off their quilts of kindness. Of course, a couple of years ago, my brother and I didn’t even need blankets because we were so high the whole night.

It’s only now that our people have been able to somewhat stave off the policemen. They still come around to upset our belongings and threaten to throw us behind bars. But I’m equally passionate about fighting them back, even if on the grounds of basic human rights.Knowledge is empowering, and it’s not that we have anything to lose.

At the same time, I don’t intend to continue living like this. As I said, something is waiting for me round the corner.

As told to Shone S Babu