Once, he sailed on ships that carted oil and timber around the world; today, Siddharth Chakravarty prowls the high seas in search of illegal whaling ships to thwart 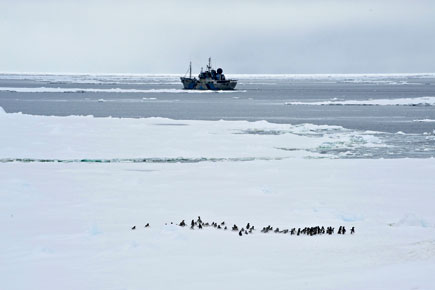 Once, he sailed on ships that carted oil and timber around the world; today, Siddharth Chakravarty prowls the high seas in search of illegal whaling ships to thwart


When I was growing up in Nasik, my grandfather often told me stories about his life at sea. He described his early training on the TS Dufferin in 1939, and the culture shock he experienced when he sailed with the British in the early days of his career. He spoke about how he managed to overcome his shyness and faltering English, and went on to have a long and successful career at sea, ultimately ending up as harbour master at the Calcutta Port in the 1970s.

My favourite story was that of the Bombay Dock explosion of 14 April 1944. I share my birth date with this incident, and my grandfather regaled me with a first-hand account of it every year as a birthday gift. On the day the freighter caught fire, blew up, and then sank in the Indira Docks, he was a cadet on a vessel moored behind the SS Fort Stikine. The part that really caught my boyhood imagination was how the explosion scattered gold ingots throughout the dock area. The ship resurfaced in the news last October, when a live World War II shell was unearthed in its hull by workers dredging the seabed.

I began my career in the Merchant Navy ten years ago. The first ship I worked on was part-orange juice tanker, part-forest product carrier. The primary cargo was forest products like paper, pulp, veneer and wood. After three years on these ships, I began to hear the first rumblings of my conscience. Somehow, carrying 35,000 tonnes of wood out of the Brazilian Amazon forest didn’t seem like the correct thing to do. This, and the fact that I was bored, made me move on to oil and chemical tankers—a shift that was initially challenging, but eventually disillusioned me.

For six years, I ferried petroleum- and chemical-based cargoes across the world for big corporations.  In 2009, after carrying a big parcel of chemicals for Dow Chemicals, I was forced to seriously reassess my life. I was born in Bhopal in 1983, and the Union Carbide gas leak is very real to me. It was troubling to carry cargo for the same company. I was also disheartened by many other aspects of the shipping industry: the working conditions of our crews, the risks we put them to, the breach of International Labour Organization (ILO) rest hours, and the pressure from owners and charterers. Also, I grew acutely aware of the extent to which commercial shipping operations polluted the waterways and oceans, through both commercial operations and accidental spills.

All the same, I enjoyed being out at sea. I loved the financial stability and independence it gave me in my early twenties. When I was younger, and had no specific career goals, it taught me hard work, dedication and responsibility. Most importantly, I learnt navigation and meteorology, which opened up my world as I sailed around the world’s oceans. Being out at sea is something that makes me feel exhilaratingly free and unencumbered. Even today, on every watch, I go out of the bridge, look at the horizon, and breathe in deeply. It helps clear my mind and makes me feel at peace.

About a year-and-a-half ago, an advertisement in National Geographic magazine caught my eye. It was for Whale Wars, a show about the Sea Shepherd Conservation Society. I looked them up on the internet and was impressed by the effectiveness of their direct action. For 30 years, the organisation’s founder Paul Watson and his privately funded navy have been striving to enforce international conservation law by chasing, scuttling, even ramming illegal whaling and fishing vessels on the high seas.

I sent them an application, and heard back from them within a month. At the time, I was about to go to Namibia to join a ship, but instead, I immediately decided to quit commercial shipping and join the Sea Shepherd Conservation Society as a volunteer. So, in a matter of seven days, in April 2011, I went from being a probable first mate of a chemical tanker to a first mate on a marine conservation vessel.

Last June, when war was raging in Libya, we decided to tackle illegal fishing of blue-fin tuna off its northern coast. The no-fly zone and war made it clear that the EU fisheries wouldn’t conduct operations in the area, leaving the coast clear for illegal fishing in the absence of any form of patrolling. I skippered the MY Brigitte Bardot, a fast interceptor ship whose speed and stealth was crucial to our operations. Sadly, despite the preposterously large nets surrounding each of the vessels we observed engaged in all-night fishing activities, each one of them was legal. I realised that unless the ridiculously high permissible quota of 13,000 tonnes came down, and stricter vigilance was imposed, the survival of the species remained in jeopardy.

Our third major campaign of 2011, Operation Divine Wind, which I’ve just got back from, was a success. This is our campaign to stop the slaughter of whales in the Southern Whale Sanctuary, near the Antarctic Circle. For three months, in the bleak, often-sunless winter, we patrol the Southern Ocean in search of illegal harpoon and factory vessels trying to enforce the UN Charter for Nature, the Convention on International Trade in Endangered Species (CITES), and Australian case law court orders. The prime offender of these laws is the Japanese Institute of Cetacean Research (ICR). There’s been a moratorium on commercial whaling since 1986, but there’s also a loophole, which the ICR exploits—killing an average 1,000 whales a year under the banner of ‘scientific research’. This lethal research even includes killing of the endangered fin whales. However, till date, none of this research has resulted in the submission of substantial scientific findings to the International Whaling Commission (IWC).

Our modus operandi is to spot the whalers’ factory ship, Nisshin Maru, and then get behind it and block its slipway. This makes it impossible for the harpoon vessels to transfer any whale carcasses onto the factory ship—which it has to within 20 minutes of killing the animal, after which the meat becomes unusable. The biggest task that we face is finding the Japanese illegal whaling fleet. This year we chased it for 27,000 km over a period of 80 days. We use past experience, weather and visibility conditions, and our vital asset, the helicopter, to find the fleet.

This year was far more challenging than the last, largely because the ICR had an additional $30 million in subsidies from disaster relief funds, which it had used to beef up security, and a rogue wave damaged one of our ships—MY Brigitte Bardot —early on in the campaign. Despite that, we saved an estimated 768 whales this year largely by persistently keeping the whaling fleet on the run. Ultimately, MY Bob Barker did find Nisshin Maru. The Japanese fleet gave up its whale hunt and left the Southern Ocean Sanctuary, defeated and in deep debt. This year again has been a victory for the Sea Shepherd Conservation Society. We economically sank the whaling fleet and the ICR, which is now in debt of an estimated $200 million.

The job we do is accomplished by working as a group. Our three vessels work together, searching for illegal whaling fleets in the Southern Ocean, while each team on a ship is assigned a specific task.

It’s especially tough for our small boat crews, who confront harpoon vessels in rigid inflatables. This time, one of our crewmembers was jabbed in the face with a pole, while others were attacked with grappling hooks. They’re routinely knocked into the ocean by high-pressure water cannons as well. Our helicopter flies in icy conditions, which is very risky. Air crews are also the ones who actually see these magnificent beasts being killed and hauled on board. They hover overhead as the whales get slit open, and watch the guts slide down the decks. It’s very ghastly, very hard to watch. It’s terrible when it’s happening in front of your eyes, when you’re watching this intelligent creature choking in its own blood as a harpoon rips through its back.

Mine is a more rewarding job than most, but it’s also very difficult. The Southern Ocean is a brutal, unforgiving place. This year, we spent close to 80 sunless days in the Ross Sea. The dangers we encounter—storms, pack ice, exposure to icy weather, extremely cold temperatures—are innumerable, and we’re at least 10 days away from any shore-based rescue. In spite of this, each one of us is fiercely determined to put our lives on the line and do all it takes to stop the slaughter of these creatures—permanently.

The Antarctic continent is one of the last places on earth untouched by humans—it is pristine, it is wild, and it is mind-numbingly beautiful. The regular sighting of whales, orcas, dolphins and birds makes up for all the discomfort we face. These creatures are our customers and we’re doing everything we can to safeguard their interests.

As told to Shruti Ravindran