On a remote hill several miles outside Bangalore, a social and cultural experiment is underway 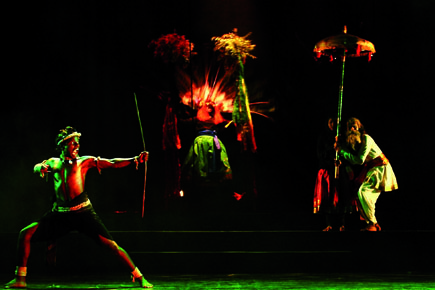 On a remote hill several miles outside Bangalore, a social and cultural experiment is underway


You are allowed your imagination here—here on top of Terahalli Betta, a few miles from the burrowed-out gold mine town of Kolar, a few dozen miles from Bangalore. The sense of being the only man or woman under a starless sky, looking down at the rocky hillocks past the thin road; the romance of seeing the gentle silhouettes of others under the blinding brightness of the moon; the feeling of being away, reclusive. On top of the hill, on a full moon night, you are allowed to imagine anything, to make up your own stories, to write your own poetry. This is why Aadima was started, and why it was named ‘Aadima’—that which harks at the primitive, the rural, the ancient.

In September, on the night of the full moon—hunnime in Kannada—a friend and I are on this imaginative hill. It is quiet on the ledge where we find ourselves. Behind us though, we hear voices and some drum beats now and then. Under bright bulbs, among a large gathering of people, this month’s hunnime haadu (full moon song) is underway. It is poetry reading this time. They usually end around midnight, but this time, it seems the event could go on all night. Closet poets, bad poets, good poets—they all read. They read political reflections, rhyming lines on nostalgia or love—there isn’t a common theme. There are no rules. Aadima, the cultural organisation that runs these monthly events, almost aggressively shuns rules, established forms and defined structures.

While the readings continue, we follow Kotiganahalli Ramaiah to a room next to a cowshed. A black cow moos but lets us through. Ramaiah is one of the founders of Aadima. He is a poet and playwright; outspoken, some would say radical. Sitting on a makeshift cot in a sparse room, his temporary quarters, Ramaiah says he would call himself an activist first.

By the 1980s and 90s, when the Dalit rights movement in Karnataka had begun to wane, Ramaiah was already a political activist. Many charged sessions with friends would involve discussions about finding new ways to protest, creating new cultural texts for the emancipation of Dalits, culturally decoding the established vocabulary of social norms and rules, sifting through feudal debris, wondering how to resurrect the Dalit movement, and suchlike.

“During one such meeting in a friend’s house, I saw a decorative sticker of a rupee note stuck to the mirror in the bathroom. That led to the idea where some 20-30 of us saved one rupee every single day,” he says. The group would meet at a different venue each time; one such venue was atop the Terahalli Betta under a large tree, united by the collective memory of Jinke Ramaiah, a legend, saint and dreamer revered by local villagers, who had once lived there.

By then, the rupees saved had cumulated to a fairly large amount. Buoyed by further contributions from here and there, the friends bought a small piece of land on top of the hill, and the organisation took off. Not without trouble though, Ramaiah says, telling us about skirmishes with fundamentalist groups, resistance from locals and the effect of caste politics. “But there was a dreamer here who lived in the collective memory still. The greatest politics is to kindle the collective memory. We decided not to go down the hill without creating a reference point here first,” he says.That reference point was a cultural experiment, which the founders hoped would be emancipatory. Ramaiah and his friends had used children’s theatre elsewhere to make cultural interventions. That was replicated here with the Makkala Mela, a month long summer camp that has now been running for over six years.

The region is home to people of many castes and riddled with the expected problems that brings. “There is a lot of cultural context that surrounds the full moon,” Ramaiah says. “These nights [of the full moon] have always been very democratic, open, living spaces. In the social context where we were trying to work, there was a need to establish some social security.” This need to establish a neutral common ground was what led to the Hunnime Haadu.

The one I attended was the 89th edition of the monthly event. Siddalingaiah, one of the best-known Dalit writers in Kannada, was to make an appearance, but his book release the next day kept him busy. There were a few other familiar names at the Kaavya Hunnime, the poetry session that full moon’s night.

Every month it is a different programme, and villagers sometimes turn up in the hundreds. Once there is a Kurosawa film screening, another time a Japanese folk art performance. An in-house group might perform a preview of a new performance they are working on, or a theatre group from the city might turn up. The Aadima team’s performance of the play Matte Ekalavya won several awards at the prestigious Mahindra Excellence in Theatre Awards festival this year.

Through Aadima, locals around Terahalli Betta get access to a wide variety of cultural events, plus a steaming hot dinner, all for free. This poetry evening has drawn the least number of people, we are told. There are easily over a hundred for most events, a number most organisers would kill for.

That the locals watch Kurosawa and non-linear plays and might indulge in intellectual discussion provokes a comparison of Aadima with Ninasam, a similar institution started by the late KV Subbanna in central Karnataka. Now run by Subbanna’s son KV Akshara, Ninasam is an influential theatre school and cultural institution—villagers in the region can supposedly hold their own talking about Brecht or neo-realism. I wonder if Aadima is cultivating similar non-traditional audiences for cultural texts that are otherwise perceived as elitist.

Ramaiah is dismissive. He is well-known for his distaste for structured learning and criticises academic institutions for no longer reflecting reality. “There is no layman reading of texts. Academic reading does not reflect the new. They don’t want to reflect and raise these questions,” he alleges, insisting Aadima is different. Its property is collectively owned and it is class-blind—it is a cultural experiment. He uses all the key words. Yet when I ask him if caste politics has loosened, if there have been visible shifts in the social order, he skirts around a direct answer. Instead, he says only that people of all castes and religions come to Hunnime Haadu.

Other voices on the hill and elsewhere grumble at how he garners all the attention these days, how he has become the face of Aadima, though there are other founders. Wrinkles in institutional management exist, and not all villagers are happy about this social experiment. Wealthy people are snapping up land to build villas, even as labour displacement and crime increase—the regular ills that plague most societies. But here, atop this hill, Ramaiah and his team are trying something new. And on a full moon night, when a gentle breeze bears down and you can see the sharply-traced silhouettes of mountains miles away, anything seems imaginable, anything possible.