How I Became a Fort Conservationist

An accountant by profession, Shridatta Raut has devoted his life to finding unknown forts in Maharashtra and conserving them. He even got married in one 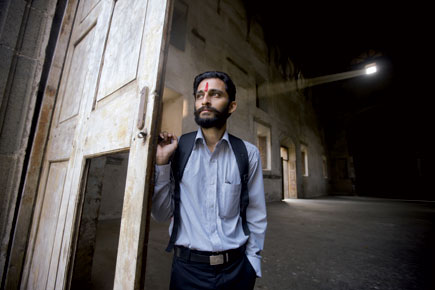 An accountant by profession, Shridatta Raut has devoted his life to finding unknown forts in Maharashtra and conserving them.

As a youngster, I was a bit of a drifter. I started working while studying in junior college, tried my hand at poetry and later started volunteering with a social organisation. But I always, in a way, felt incomplete. During my college days, I got quite involved in poetry. I lived in a small apartment in Bhayandar, on the outskirts of Mumbai, and wanted a quiet place where I could write. I also had no interest in the BCom degree I was pursuing. So a friend somewhat jokingly suggested I try Vasai fort.

I had never been to a fort before. On my first visit, I remember being awestruck by the isolation and loneliness of the fort. The walls, ramparts, remnants of temples, wells and tunnels—they all spoke of a glorious time. But now they were nothing more than neglected relics of a bygone era. I kept visiting this place. I started bunking college almost every day to spend the entire day at the fort. I wrote a bit of poetry, but soon I came to notice that I was spending a lot of time simply observing this strange and isolated world.

As this went on, I began to notice how neglected this space was. The only people who seemed to visit it were lovers meeting secretly and youngsters looking to drink, and often brawls would break out among them. No one was interested in the fort itself or its history. And almost every wall bore initials of lovers with hearts drawn around them.

That’s when I, with the help of friends, formed a group called Kille Vasai Mohim to clean up the place. We would spend every Sunday picking up garbage and refuse, clearing the choked water tanks and removing graffiti. But from an enthusiastic group of about 60, it petered out to about seven after a few weekends. I realised I needed to do something more. So I decided to provide free guided tours on weekends, the only condition being that people would have to spend an hour helping me clean the place.

The programme proved quite successful.

But it also had another effect—I started getting drawn deeper into research.

I started visiting libraries and archives in Mumbai and Pune to read about Maharashtra’s forts, especially those located in Thane district. This was also the period when I got a job as an accountant with an agency in South Bombaythat worked with mobile service providers. I would wrap up all my work by noon and sneak out to visit the nearby Asiatic Library. When I realised that most old texts on the area’s forts were written in the Modi script, which was used in Maharashtra in earlier times, before Devnagri picked up, I enrolled myself in a college-conducted course on Modi and later found a tutor to teach me. I also left my parents’ home and moved to a house in Vasai so I could live closer to the fort.

I slowly came to understand that there has been very little historical research on forts in Maharashtra. For instance, so far people have only been able to identify about 53 forts in Thane district, whereas according to a few accounts, there should at least be about 113. I started looking around for them. I discovered one such fort on a hill in a village called Datiware. This was, according to my research, built sometime in the 18th century and was used by Maratha warriors as a stopover point on the way from Vasai fort to Kelwa fort. But now all that remains of it are a few steps and a water tank. Nobody, not even locals, knew of the fort or how the steps came to be.

Many times, I have had to face disappointment. A few years ago, I started searching for a fort in the Bhiwandi area. The existence of such a fort, built sometime in the early 18th century and used by individuals like Bajirao Peshwa, had been mentioned in some accounts. But nobody had been able to locate it or even knew if it existed. Last year, I found its remnants in a nearby village. All that remained of it was two large walls, and villagers were using this place to relieve themselves. When we went to check out the place, we were denied access to it by the locals. We are still pursuing the matter and hope to change their minds.

We’ve also had some remarkable discoveries. We once stumbled upon an old, undated statue of Yamraj within Vasai fort. On another occasion, we discovered an official seal in the Mahim Kelwa fort that is supposed to have been made in the 16th century. Once while I was conducting a tour in Vasai fort and telling the group about how old the fort was, a man said he had seen older items in his village. This man was in his eighties and I thought he was simply bragging. But a few months later, I checked out his village on an impulse. He lived in a far-flung area called Kiravali village. To prove his point, he took me to the village temple, where a stone tablet was being used to break coconuts.

I, along with a team, began examining the tablet. It was about 126cm in length and 56cm in width. It was extremely old and seemed to have an image carved on it. The image was, however, faint and unclear so we began cleaning it with tamarind leaves and oil. Once we were done, we were shocked. The image carved was that of a donkey copulating with a woman. We later learnt that the tablet dates back to 1268 AD, the era of the Shilahara dynasty, which ruled a large part of Maharashtra. It was probably used as a warning sign to ward off intruders. The old man was amused to learn of it: “And all this while we thought the tablet was holy and were praying to it.”

My focus, however, has mostly remained on Vasai fort. I spend every Sunday conducting a free guided tour of the 110-acre fort and delving into its rich history; how it was run by the Portuguese and later the Marathas. We also try to clean and conserve the area. A few years ago, we decided we should try to restore the painting on some of its walls and objects. We decided to use organic dyes to do so, except none of us had the money. So we began a drive asking volunteers to visit Ganapati mandals, especially Lagbaugcha Raja, to fetch discarded flowers. We collected these flowers, and along with banana peels and sugarcane juice, created vegetable dyes out of them. As a result, we’ve able to restore the paint on many walls and objects.

Neither the government nor any other agency takes care of these forts. Some, like Vasai fort, fall under the Archaeological Survey of India, but there is absolutely no maintenance work done by it. Many of these forts are rapidly disappearing and getting encroached upon. I’ve started documenting, keeping notes and preparing maps of various structures within forts. I’ve also published some of my work and discoveries. I do all of this because I realise that in a hundred years’ time, many of these structures will probably not exist.

This passion has also helped my personal life. A few years ago, I was conducting a tour of the Vasai fort for employees of a bank. One of the group members was particularly interested in the subject, and she kept coming to help in various conservation activities. We decided to get married soon after.

Around the same time, a rumour began to spread. Locals began to talk about how the fort was haunted, and how we risked the wrath of evil spirits if we continued to clean up the space and thus destroy their peace. Some of my volunteers were also scared by this. Both my wife and I wanted to show this was untrue. That’s when it occurred to us—why not dispel their fears by getting married here? We got a priest, garlands and sindoor, and with a few friends as witness, got married in an ancient temple—by far our most special place.