Growing up, Miyuki Kamimura didn’t hear stories of gnomes and fairies. His was a childhood with tales of people with half-faces and burnt skin. We learn of life in the shadow of Hiroshima 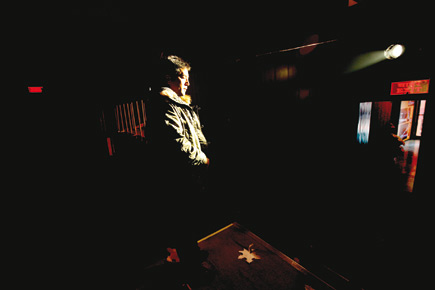 Growing up, Miyuki Kamimura didn’t hear stories of gnomes and fairies. We learn of life in the shadow of Hiroshima


August 6, 1945. It is a date which has literally become part of our blood, our genetic code in Japan. While children across the world grew up on tales of gnomes and fairies, every kid in Hiroshima was fed stories about the horror of the bombings. Kids like me, who were not even born at the time, can relive the clawing helplessness of that day as if it all happened right in front of us.

My mother is a reluctant storyteller. She doesn’t want to fall into an abyss of memories by recounting the stories again and again. But as a child, I would hear others talk about my family, and I would want to hear from her if all that was being said was true or not. Her face would crumple at my request, yet she would softly pour the memories into my ears.

It was 8.30 am. A bright, happy morning—citizens of Hiroshima cheerfully went about their work, blissfully unaware that they would soon be part of the pages of history. My mother had gone to the mountainside to meet someone while the rest of her family worked in the heart of Hiroshima. Suddenly, she saw a bright flash followed by a deafening sound. A huge gust of wind blew towards her; petrified, she ran up the mountain.  An hour passed and there was no news from the city.

As she sat praying, she heard footsteps and saw her brother walk up the mountain. Her delight soon turned into despair when she saw the condition he was in. Half his face had melted away and he was on the last ebb of his strength. Hysterical with sorrow, my mother ran down to the city. Hiroshima was drowning in acid rain and its waters had turned black. People lay unconscious as if in a stupor. Some had just melted away. Bright daylight had turned into inky darkness. Some people were running, forgetting all the heat and pain, only eager to get far, far away from this horrifying ordeal. As if running away would heal the scars and take away the hurt. A lot of their clothes were gone; they were all naked with their burnt skin and blistered hair. Mothers burst into their houses to look for their children, only to collapse on a mangled heap of bodies. And that’s where her story ends. She never reveals if she saw her family one last time, but in my imagination, she does. I hope in my heart that she was able to say a final goodbye.

When I was growing up, it felt as if the combined grief of Hiroshima was weighing me down. Maybe, it was the need to express this sorrow and hurt that I decided to become an actor. I wanted to channelise this anger or it would have destroyed me. When I went to study theatre at Singapore’s Theatre Training and Research Programme (TTRP), I realised how little the world knew about Hiroshima. During my interaction with international actors and directors, I got to know that the city was just a matter of figures for some—the number of people who died, number of children with genetic mutations because of the radiation, so on and so forth.

It was a city that had sparked off a worldwide debate about whether or not the use of the bomb was necessary to achieve victory in the war in the Pacific.
It feels unreal to sometimes hear these clinical discussions; feels like they are talking about someplace else. Because, maybe for me, the event is more intimate and personal. I can’t have such a Spartan outlook on it. When you see people going about their lives with a stern determination even in the face of suffering, it changes your perspective about things. And that is what I want to show the world—not the unhappiness or grief, but the strength and survival instincts of Hiroshima.

In my career as a theatre actor, I have always waited for an opportunity which would allow me to do this. Last year, when Kok Heng Leun, the award-winning artistic director of Drama Box Theatre Company, screened me for The Spirits Play, I felt that I had got that golden moment. This play, which we showcased in India, evoked memories of the 20th century Pacific War and explored the concept of guilt and pain. Five post-war personas in a state of limbo meet each other at a deserted place and share their haunting experiences of the war. This exchange of memories makes them see the senselessness of war and the suffering that it inevitably leads to.

When we were working on the script, Leun asked each of the six actors to talk about sacrifice and pain. When he heard my story, he decided to include Hiroshima in the play as well. I had mentioned this during the play rehearsals and I will say it again: let us not look at Hiroshima in isolation. What happened in Hiroshima is now happening in Afghanistan and Iraq. What ties these incidents together is human suffering. Imagine walking to your workplace, some six months after its bombing, and finding the number of workers reduced from 60 to 20. And whoever is left is a hairless, faceless entity. War all over the world leads to degeneration of the human condition.

At a time when there was so much anger against America, my mother taught me that there are only good people and bad people; don’t segregate them by religion, nationality, caste or creed. She told me about countless American soldiers and missionaries who helped the sick and injured during their hour of need.

One can’t help but warm to such people, especially when there were times when some of our own turned away from our needs. The Japanese government had come up with a card for Hiroshima victims that would entitle them to free medical aid. A lot of people were turned away because they couldn’t prove that they were citizens of Hiroshima and were present in the city at the time of the bombings. All their documents had been burnt by the fire started by the bombings; there was no proof to substantiate their claim. My mother is still applying for this card. She is now 76, with most of her life behind her. By continuing to fight, she feels that someday, maybe when she is gone, someone will get the justice that is deserved. As for my siblings and me, we have thankfully been saved from mutations. But I fear for my kids. I don’t know what kind of mutations they will have. One can just wait and pray.
I feel that war is created by people and peace can be created by us too. That can only happen when we share and exchange experiences and happiness. Be world citizens and not confine ourselves to artificial  boundaries created by man. Only then will peace prevail.