Growing Up in Sonagachi

Nilayan Dutta’s childhood was spent in easy familiarity with one of the most famous red light districts of India. Like a recurring dream, his memories keep drawing him back there 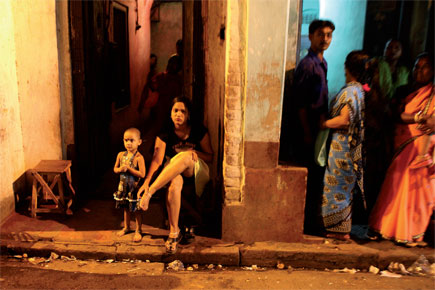 Nilayan Dutta’s childhood was spent in easy familiarity with one of the most famous red light districts of India. Like a recurring dream, his memories keep drawing him back there


More than a hundred years ago, my great-great-grandfather had bought a house in a locality known as Sutanuti, which was one of the main developed towns at that time and is now the oldest part of Kolkata. My family from the paternal side has been living in the same house since then. Meanwhile, Sonagachi, the biggest red-light district of Kolkata with a population of over 10,000 sex workers, also began to expand in the neighbouring locality.

In my childhood, I had no distinct feeling of growing up around brothels. I could never experience the awe, curiosity or strangeness that outsiders interested in Sonagachi felt. It was just another place with known names and known faces. When I was admitted to a local school, the number of these known faces increased considerably. My social and personal relationships with other children of the neighbourhood led to an understanding of the area, though I still harboured only a blur of what a red light district meant. It was not until adolescence— with my accumulating knowledge of human relationships—that this blur gradually became clearer. I understood the norms and deviances of what I was a part of.

My parents didn’t frown on my mingling with the children of Sonagachi’s inmates. Gradually, I gained a deeper feel of the area. I had my mashis, didas, kakas and didis. The relationships were as spontaneous as ever, except that I was always asked to go back home before the start of their business hours.

My realisation of ‘adulthood’ came much earlier because of the proximity to Sonagachi. The distinction of the district lay not only in its air, lights, sounds, voices, laughs, cries, and smells, but also in the language. Body- talk was common and mostly in socially unacceptable terms. I learnt the usage of words like haldi-bhaat (a man living on the earnings of a sex-worker), khangari (a rich person who became a pauper after spending his wealth in the brothel), heh (a code between two pimps for their share on a single client). I sometimes felt the place was like a huge garden—you could not help breathing in its quaint smell if you stayed too close. I learnt to play card-games, especially Kitty, the most popular one among sex workers. My inquisitiveness of the culture led me to understand the economic and social divisions among sex workers. The four distinct categories were Agrawali, Madrasi, Nepali and Bangali. Agrawalis were the wealthiest community of Sonagachi. They came from Uttar Pradesh and maintained their own sphere of influence in the area. Their community had a norm which barred male members from earning a living. Men would be fed and taken care of by their sisters. The Agrawali women were proud of this duty towards their brothers.

Kartik Puja in the red-light district almost challenged Durga Puja in glitz and glamour. While the latter was a celebration of the mainstream, the former served as an assertion of the marginalised. All the brothels would put up replicas of crude temples decorated with colourful lights and flowers for Lord Kartikeya during the time. Some worshipped him as their prosperous client and others wished him to be their son. The festival would go on for almost a week, followed by an immersion, which entailed a deafening procession where sex workers would dance to popular Hindi songs. I had plenty of invitations for Kartik Puja celebrations in Sonagachi.

My memories of being intertwined with the district started fading after I was admitted to college. My interest in photography led me in an unconventional direction. Because of my lack of institutionalised education in photography, I went about teaching myself. I decided to assist other photographers, mainly foreigners, through the jumbled streets of Calcutta, and also learn something along the way—like seeing one’s known world through new eyes. Most notable among those experiences would be in the mid-90s with the American photographer Zana Briski. Zana requested my assistance for her documentation project on the daily life of sex workers of Sonagachi. I walked around the familiar alleys with her for some time till she went to Nepal and then to her native country, the US, to raise funds to carry on her Sonagachi project. I resumed my learning, and all of a sudden I got an unexpected opportunity to understand modern journalistic photography under the guidance of some world famous photographers and editors such as Stanley Greene, Robert Pledge, Ruth Eichhorn, Vincent Alabiso. It was followed by an internship with GEO magazine, which took me to Germany. Memories of the faces in the red-light district became more distant as I travelled to new places for new stories.

For the past couple of years, memories of Sonagachi have been coming back like a long forgotten dream. It led me to start a personal documentation project on the streets of Sonagachi during its business hours every evening. I found no known faces, and realisation dawned on me that more than two decades had passed since my childhood there. But though new faces have replaced old ones, the place remains the same. The same old outlandish stench of familiarity and unfamiliarity, pacing leisurely in corners. The dark, dingy, nameless, crisscrossed lanes with labyrinths of single rooms all around, often only partitioned by curtains, a little like the chaos in one’s own mind. For someone who shared his life with the place, unveiling Sonagachi is interesting, intriguing and disturbing, almost like going back to a place one had belonged to chart the dark annals of history in search of that one light or whisper of creation.