The mysterious world of a house cat 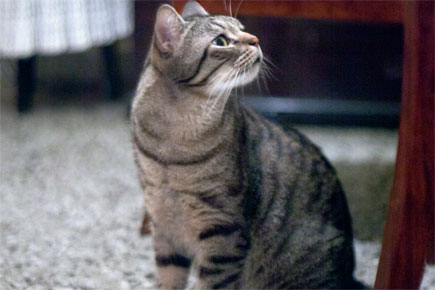 The mysterious world of a house cat


When I lived in Colaba in Mumbai and the cat was still new, he used to crawl along the stone ledge above my writing desk. He used to stare up at crows there and, I think, fantasise about goring them. His tail would twitch. His ears would draw back. He’d yell at me to open the wide windows we had there. I’d tell him to piss off. He’d look at me, thinking something. But I never knew what it was.

The cat is ‘Rohmer’. He’s a very vocal, very large four-year-old half Persian/half-Colaba street cat I picked up just a few weeks after my father-in-law passed away from lymphoma during the last monsoon. He looks like a cartoon tiger projected onto an old TV set that makes things look greyish-beige. His face is scrunched up like a Persian’s but his body is muscular and lean. Rohmer spends his days indoors communicating only with my wife and me. He’s a nomadic hunter by birth but he doesn’t often get to act on it. I’ve seen him leap half the length of a room just to pick a housefly out of the air with his claws.

After my father-in-law died, I figured a cat would be more useful to my wife than the usual spiritual platitudes people tend to espouse after someone important dies. There are just so many ways you can say the same thing, even if you’re being sincere. Animals do things people can’t. Like sit there with you when you don’t want to go anywhere.

Rohmer grew up in the home of an old man who was apparently one of Mumbai’s most famous ballroom dancers once. I didn’t even know that Mumbai had a ballroom dance culture. I’ve never ballroom-danced before and I possess no inclination to learn at age 33. But this old and great dancer fell very ill, and his daughter had difficulty balancing the tragedy of the situation with the four tomcat brothers that chased each other throughout the family’s dance studio-cum-apartment on a nearly perpetual basis. When I visited the place, the cats chased one another with all of the grace of shotgun bullets going through a plate glass window.

A week or two after Rohmer arrived, his genitals were ‘corrected’. Now, I happen to be a vegetarian these days, specifically for animal rights reasons, and I don’t like to do anything to an animal I wouldn’t want done to myself. If someone tried to tie my balls together for the purpose of asphyxiating them, I’d probably want to choke them to death with my bare hands. But we were told that if we wanted Rohmer to stop spraying everywhere, this was what we had to do. So we did it and he calmed down. Before long, he started sleeping at the foot of the bed, and eventually started resting side by side with my wife when she cried in her grief—as if he knew something was hurting her. Maybe, he did know. Maybe, it was as simple as a shift in his hormones. I don’t know.

The name given to Rohmer by his previous family was Cappuccino, which I think is a lame thing to name your cat. Rohmer was renamed after the French New Wave filmmaker Eric Rohmer. For the uninitiated, the human Rohmer made these boy/girl romance films where the characters talk about love and sex at a descriptive level far above that of normal interaction. It’s a pretentious thing to name your cat, of course, but I’m pretty sure he doesn’t care. And to what capacity he even knows his name, or understands that he even has one, I cannot really be certain.

My wife is Indian and I’m American. We both give him nicknames. Some of them are inexplicable. She likes to Indianise his name, for example. She calls him Rohminder Singh Chowla, which sounds Punjabi to me. I sometimes call him ‘Chromer’ instead of Rohmer. I think it’s a derivation on the Indian electronics chain Croma. But I just recently started calling him ‘Doon’ or ‘The Dooner’. I don’t even know what that means. It’s just a sound that comes out of my mouth after a glass of Bourbon.

Rohmer and I spend a lot of time together. Usually, I’m writing, and he’s cleaning himself, but on rare occasions the situation is reversed. We often attempt to communicate beyond the species divide. Sometimes this works better than others. Like at dinnertime. The loud meowing erupts around 6 pm. I know that means he’s ready to eat his disgusting food. We don’t keep meat in the house besides the foul-smelling dry pellets he eats. These things are dead animal parts shaped into chewable circles—like M&Ms or Smarties made of ground pig hoof and turkey anus. One time he was so hungry for this smelly crap, he climbed on top of the fridge where we keep it and slashed the bag open with his claws. We had to sweep the remainder of the pellets into a recycled FabIndia shopping bag. Within two days, the thing was nearly translucent with oozing slime.

Rohmer doesn’t only talk with his mouth, of course. The cat also greets us at the door. After we walk in from outside, he gets intense about things. He flops on his back and wants us to rub his stomach. It’s kind of a weird gesture from my perspective, but I’m assuming there’s a lot of trust involved in this ritual so I take it as a sign of affection. You could count the number of human beings who have rubbed my exposed belly on one hand.

No one will ever know the specifics of how or what an animal thinks or dreams. And if they tell you they do, they’re lying. I don’t believe in cat whisperers, and I certainly don’t believe people who think that animals are stupider than we are because they don’t speak our languages or worship our gods. Hemingway attempted to render the play-by-play inside the brain of a wounded lion in The Short Happy Life of Francis Macomber, and one of the pleasures of reading it was the way he allowed his imagination to revel in the pleasures of unknowable truths: This animal is a conscious being with a mind. It is likely that he or she thinks. But about what?

Sometimes I catch Rohmer watching TV. What does he make of it? When I play music in the apartment—Beethoven sonatas, My Bloody Valentine’s Loveless, a rap mix-tape about easy sex and gang violence—is it all the same to him? What about memory? Does he remember his brothers? Does he miss them? What about the dance studio where he grew up?

The day we moved from Colaba to the suburbs was the closest I came to knowing what Rohmer thought and felt. Cats are terrified of inhabiting new places and, for the most part, so are writers. Rohmer and I dig into a space and stay there. We leave our DNA lying around in chairs. We park ourselves in specific spots and stay there for hours at a time doing things that only we understand. The day the furniture guy moved our TV, Rohmer leaned down from the highest perch and glared at him. Rohmer has a hard glare when he’s angry. It’s kind of a gangster movie stare. I sympathise with it. Like Rohmer, I prefer a controlled world. But unlike Rohmer, I possess the capacity to choose where I live, and right now it’s the suburbs of Mumbai.

The most frustrating thing about loving your pet, I think, is to feel so emotionally connected to another living creature, and yet so impossibly far away.