Soulmates of the East

The Modi-Abe bromance is built on a grand Asian project 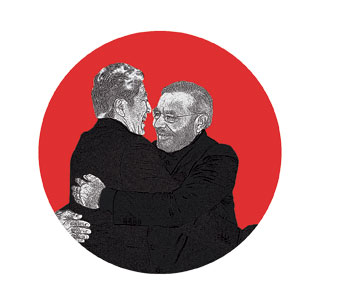 The Modi-Abe bromance is built on a grand Asian project


There is an old American phrase, ‘wooden Indian’, that was used to describe the life-size statues of Native American chiefs placed outside tobacco stores in the United States in less enlightened times. Since many customers were illiterate, vendors needed a visual prompt to lure them indoors. I’ve always thought of that phrase when I visualise Manmohan Singh, a gentleman, but oh-so-wooden on the public stage. One cringed when he stood next to George W Bush, an exuberant Texan, in New Delhi; and one cringed again when he was at the White House with his wife, visiting the Obamas. Alongside the elegance of the American First Couple— he with his expressive leanness, she with her robust physique—Singh seemed a cut-out doll with a turban. A Wooden Indian.

Narendra Modi, his successor, offered an altogether different image on the diplomatic stage in Japan earlier this month. His Jodhpuri suit was much better tailored. He moved easily, a faint trace of swagger in his gait, and was never awkward in a crowd. His was an altogether more physical presence. Can you imagine Manmohan Singh playing the drums before a Japanese audience? Can you picture him tweaking the ears of a little boy in public, as Modi did playfully to a tyke in Tokyo?

The biggest contrast between the two men, however, was in Modi’s chemistry with Shinzo Abe, his Japanese counterpart. (So comradely were the two men, in fact, that I expect to be told by Dinanath Batra that ‘bromance’ was invented by Vedic brahmacharis.) For Indians, this rapport was a phenomenon to behold. It was the first time since Jawaharlal Nehru that an Indian prime minister appeared to have a true soulmate in another international leader of stature. World leaders, when visiting each other, usually put on convincing shows of conviviality (sometimes with teeth gritted). Occasionally, they even hit it off. The Modi-Abe bond, however, suggests an extraordinary harmony, one that goes beyond the comfort of shared wavelengths.

The peerless ideal of soulmateship will forever be the Reagan- Thatcher duo. Like Messrs Modi and Abe, Ronnie and Maggie were profoundly—even adamantly—nationalist. Their special relationship was grounded in the Special Relationship (so much more vaunted in London than in Washington) between the US and Great Britain, whose modern origins lie with another pair of soulmates, FDR and Winston Churchill. India and Japan have, as yet, no such singular relationship: Ties between the two Asian countries, for long correct and cordial, are only now showing a passion that catches the eye and suggests that a Big Alliance is afoot.

One has to reach for the history books and those stilted (but charming) old newsreels to encounter the last bosom buddy of an Indian prime minister: He was Gamal Abdel Nasser, whose friendship with Nehru defined an era of nonalignment. Although Nehru was patrician and Nasser the son of a postman, they bonded over a shared project that sought to transcend nationalism. Nehru, a gregarious internationalist, had other friends, too: Tito, Nkrumah, and Chou En-Lai (who would later break Nehru’s heart). But after Nehru, Indian prime ministers became socially stilted.

Shastri wasn’t in office long enough to bond with anyone, and Indira, who followed him, was much too haughty. Patrician like her father, but without his erudition and confidence, she could be more combative than comradely on the world stage. (Richard Nixon, famously, refered to her as “a bitch”.) India’s warmest ties under her were with the Soviet Union, whose leaders prefered a scripted bonhomie. After her came a succession of gauche men, beginning with the distinctly unconvivial Morarji. The prime ministers who followed him were mostly netas from the Cow Belt, ill at ease on the foreign stage and so wedded to provincial priorities that a ‘bromance’ with a fellow statesman from abroad was inconceivable.

If there was one prime minister who cut a dashing figure amid that grab-bag of gray men, it was Rajiv Gandhi. Personable, cosmopolitan, more at ease in the West than he was in his own country, Rajiv could have been a rare Indian prime minister who forged close ties with a fellow-traveller from a friendly country. But he was, alas, a lightweight in international affairs, not to mention a reluctant politician.

Like Reagan and Thatcher before them, Modi and Abe have bonded over a grand project. If the first pair were determined to win the Cold War for the West, the two Asian BFFs are working in tandem to protect their countries from an increasingly irrepressible China. All the great modern political friendships have been embedded in grand endeavours, none more ambitious than the peace treaty between Egypt and Israel, wrought by Anwar Sadat and Menachem Begin. The ultimate odd couple, the two men met each other 10 times between 1977 and 1981, the year of the Egyptian’s death, and developed a lively, improbable friendship.

Years earlier, Konrad Adenauer and Charles de Gaulle—who embraced and kissed each other on the cheeks in Reims in 1963, after signing the Franco-German Friendship Treaty—sought to banish from Europe the spectre of war. (In the four years preceding the treaty, they met 15 times and, per Der Spiegel, wrote 40 letters to each other.) The same European project drove François Mitterrand and Helmut Kohl into each other’s arms. Who can forget the image of the two men holding hands at Verdun, where countless German and French soldiers perished in 1916?

For all their outward differences, Modi and Abe could one day come to have as much in common with each other as Reagan and Thatcher. What is unusual is that their bromance has blossomed at a time when no other leaders of top-rank countries are ‘in a relationship’. Apart from these two men, I can’t think of any soulmates on the international stage. Can you?