Silence of the Civilised

The beheading of James Foley and the sinister truth about ISIS 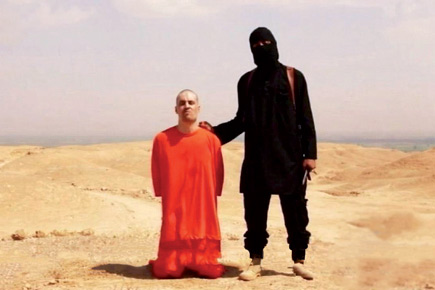 The beheading of James Foley and the sinister truth about ISIS


The deafening silence of Islamic leaders and preachers worldwide about the killings, including the brutal beheading of James Foley, of forced conversions, enslavements and desecrations of Abu Bakr al- Baghdadi’s Islamic State or ad-Dawlah al-Islamiyyah, the former al-Dawla al- Islamiya fi Iraq wa al-Sham, that is, the Islamic State of Iraq and Syria, or ISIS, proclaims an important truth: as far as good Sunni Muslims are concerned, killing Yazidi or any other pagans who refuse to convert, removing ‘arrogant’ crosses from churches or turning them into mosques, beheading apostates such as Syria’s ruling Alawites and such, may not be very nice or very polite but it is all perfectly legal and proper under Islamic law.

Apostasy is a crime in 23 Muslim states and people have been beheaded for it in recent years in both Iran and Saudi Arabia. In Turkey, apostasy from Islam is still legal (if too dangerous to disclose) but only because of the old constitution that its current leaders are dismantling—it is revealing that the neo-President Erdogan and Prime Minister designate Ahmet Davoutoglu always describe President Assad’s community as ‘Nusayri’— Sunni pejorative for ‘Alawite’. In other words, Abu Bakr’s Islamic State may be extreme for us, but it is much less so for its only relevant audience of believing Sunni Muslims everywhere—the ones who enthusiastically voted for Erdoganprecisely because of his Islamist slogans.

Nobody should therefore be surprised by the ability of the Islamic State to attract Muslim volunteers even from affluent Western Europe, for it is merely practising the Islam they learn in schools and mosques. That other Islam, ‘the religion of peace’ that is invoked in public speeches all over the West from US President Obama down, does really exist here and there. But it is a minority view lacking in popular legitimacy, and its preachers are despised as weaklings or government agents (moderate ‘official’ Imams have recently been assassinated in both the Russian Federation and China’s Xinjiang province).

Another significant aspect emerges from the precedent cited by Abu Bakr al-Baghdadi in announcing his new ‘caliphate’ from Mosul, Iraq’s second-largest city and a multi-religious metropolis—until its conquest on 10 June 2014. He did not recall the famous caliphates of history, from the Umayyad to the longer-lasting Abbasid extinguished by the Mongols in 1258, the Egypt-based and tolerant Fatimid inbetween, or the Ottoman one that lingered till 1924, let alone the extant Ahmadiyya caliphate that he would condemn as heretical.

Instead, like mainstream Sunni Muslims including professors in Western universities, ISIS’s caliphate celebrates the rule of Muhammad’s first four ‘rightly guided’ successors, the al-Khulafa’ ur-Rashidun—who followed one another after his death in 632. Unable to assume Muhammad’s prophetic role, his leading followers Abu Bakr as-Siddiq, Umar [or Omar] ibn al-Khattab, and Uthman ibn ‘Affan, took control of his movement in that sequence as his ‘successors’, Khulafaa’, from which their rule became known as the ‘succession’ or Khilafat (caliphate).

When modern Muslims afflicted by the sad condition of today’s Muslim world speak in praise of the Rashidun, the reason is rarely the serenity of their rule. The first Caliph, Abu Bakr as- Siddiq (632-634) had to fight tribal rebels throughout his two-year reign, and also the supporters of Muhammad’s daughter Fatima, who wanted the leadership for her husband Ali ibn Abi Talib— which marked the start of the Sunni-Shia split (the latter being the ‘party of Ali’). Abu Bakr died of illness, but of the other three Rashidun, Umar ibn al-Khattab (634-644), also known as ‘Omar the conqueror of Jerusalem’, was assassinated by a Persian captive; Uthman ibn ‘Affan (644-656) was lynched by victorious rebels in his own house in Medina; and Ali ibn Abi Talib (656-661), revered by the Shia, was assassinated.

But all this is disregarded because what modern Muslims celebrate are the great conquests of the Rashidun: within a year of Mohammad’s death in 632, Muslim warriors launched raids on Byzantine Syria and Sasanian Mesopotamia. The two empires had been fighting for almost 30 years, destroying each other’s power. A few years of peace would have restored them, but Arabs waving the banner of Islam arrived first. By 636, both empires had been defeated decisively , and these utterly unexpected victories opened the way for conquests that soon reached across North Africa all the way to the Atlantic, and as far east as the Indus valley. For adherents of the new faith, those victories vindicated Muhammad’s central promise that Islam would assure them victory. But that same promise is now the cause of explosive inner tensions, because in recent centuries Muslims have been defeated again and again by Christians, Hindus and Jews. These defeats generate terrible inner doubts about Islam itself, which are vented in extreme outbursts of violence and wild fantasies of renewed conquest. The black flags of the Islamic State, lately also seen in Berlin, Paris and London as well as in Iraq and Syria, often feature maps of a Muslim world that include Spain (‘Al Andalus’) and much of India, as well as Israel of course. That too derives sanctity from an Islamic law which prescribes that any land once ruled by Muslims is under ‘wakf’, a sacred trust, that nobody can give away to non-Muslims (this is the law cited by Hamas to reject any peace accord that involves recognition of the state of Israel).

Muslims are currently waging jihad from Mindanao in the Philippines to northern Nigeria and beyond in Mali, across Thailand, India, Pakistan, Iraq, Syria and Libya as well as the Gaza Strip. Abu Bakr al-Baghdadi’s Islamic State differs because it displays its beheadings and desecrations on YouTube, calculating that the spectacle will attract more recruits.

These are hard truths, but no successful strategy can be built on self-deception.