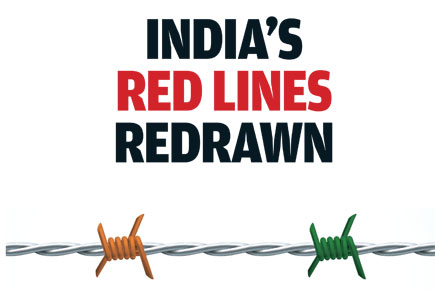 On 4 June, tribal guerillas, using rocket-propelled grenades and detonating improvised explosive devices, killed 20 soldiers and injured several others in an ambush when a military convoy was travelling to Manipur’s capital Imphal from the town of Motulin in the state. This was one of the most serious attacks on Indian security forces in the Northeastern state in a long time where India has struggled to contain unrest despite granting its security forces sweeping shoot- to-kill powers in so-called ‘disturbed areas’ under the controversial Armed Forces Special Powers Act (AFSPA).

India’s response to these attacks came five days later, on 9 June, when the Indian Army attacked rebel camps inside Myanmar early Tuesday morning, destroying two camps and killing up to 15 rebels. Underlining India’s resolve to pre-empt terror threats undeterred by borders, para commandos of the Indian Army carried out surgical operations deep inside Myanmar, killing several militants in two rebel camps. The Army’s message was terse: ‘While ensuring peace and tranquillity along the border and in border states, any threat to our security, safety and national integrity will meet a firm response.’ The Indian Army had ‘credible and specific intelligence’, on the basis of which it carried out the attacks. Zaw Htay, director of the office of Myanmar President Thein Sein confirmed a day later that Indian troops had entered his country’s border. He said that there was ‘coordination and cooperation’ between authorities but no Myanmar soldiers were directly involved.

Responding to a query as to whether India can conduct such an operation inside Pakistan, Indian Minister of State for Information and Broadcasting Rajyavardhan Singh Rathore said: “This should be a message to all countries and organisations [that] foster terrorism against India, including Pakistan.” This set off alarm bells in Pakistan, where sections of the media and defence officials suggested that the incident could set a precedent for more cross-border raids. Pakistan’s Interior Minister, Chaudhry Nisar Ali Khan, warned India that “Pakistan is not Myanmar”—something which no Indian needs reminding.

By all accounts, the raid was well-planned and competently executed. The operation was important to lift the sagging morale of India’s armed forces, especially after attacks by insurgents in Manipur. All sections of the Union Government—the intelligence agencies, the armed forces and the Ministry of External Affairs—worked as an organic whole under the leadership of the Prime Minister and the National Security Advisor. This is a rarity in Indian policy-making and should be recognised as such.

Though the Indian Army had conducted a number of cross- border raids in the past in collaboration with partner countries, the speed with which this attack was carried out after the initial terror attacks was not only unprecedented but also demonstrates a new level of confidence in the political authorities in wielding the military instrument of coercion.

Also, with this raid, a multi-layered border policy seems to be emerging. The Modi Government has, from the very beginning, followed a policy of ‘disproportionate response’ to border provocations. Indian troops have been given greater operational autonomy to be aggressive in responding to ceasefire violations by Pakistan. The Indian military has been given the much-needed operational space to carve out a response that is swift, sharp and effective, underlining the costs of Pakistan’s dangerous escalatory tactics with massive targeted attacks on Pakistani Ranger posts along the border. What has worked on the border with Myanmar will clearly not work on the western borders against jihadi groups and that contextualisation has been part of the Indian Government’s response. Also, cooperation with like-minded states such as Myanmar and Bangladesh will be crucial to deny terror groups safe havens across the borders. The government of Myanmar reportedly approved the Indian plan to send in special forces to attack insurgent camps on its territory. To justify its attack, New Delhi invoked the May 2014 border agreement with Myanmar which provides for a framework for security cooperation and intelligence exchange between the two states.

Despite this, a narrative has emerged in the country that holds that while the operation was well planned, the political communication was unnecessary and immature. Sections of the media, former diplomats and arm-chair strategists have converged in suggesting that the Modi Government messed up a fine operation by talking about it. The argument goes that covert operations by their very definition should not be talked about. Clearly, restraint should be the norm while discussing security operations, but the Indian Army’s operation in Myanmar was important to be publicised. To say that the Indian Government should have undertaken such a risky move with little or no publicity is a bit of nonsense, really. It was imperative for the Modi Government to send out a message in unambiguous terms that India retains the ability to hit back at insurgents. Signalling intent and demonstrating capability is key in establishing and strengthening deterrence in inter-state relations. There is a reason why all major powers make a big deal when they resort to the use of their military instrument. In fact, rather than a junior minister, it would have been better for the NSA or Prime Minister to speak directly to the people of India about the Myanmar raid and its implications. This is the norm in mature democracies. After all, the message is not simply for the domestic audience. It is also to reassure allies and to deter adversaries.

India’s friends and enemies have long back stopped taking India as a military power seriously. A nation’s vital interests, in the ultimate analysis, can only be preserved and enhanced if the nation has sufficient power capabilities at its disposal. But not only must a nation possess such capabilities, there must also be a willingness to employ the required forms of power in pursuit of those interests. India’s lack of an instinct for power is most palpable in the realm of the military, where, unlike other major global powers of the past and present, India has failed to master the creation, deployment and use of its military instruments in support of its national objectives. A state’s legitimacy is tied to its ability to monopolise the use of force and operate effectively in an international strategic environment and India has lacked clarity on this relationship between the use of force and its strategic priorities.

New Delhi is sending a clear signal to its adversaries, both state and non-state, that hostilities against India will not go without a robust response. The Myanmar operation was a step towards restoring India’s credibility. But it is a long road ahead as a single operation does not a strategy make and the effectiveness of this new Modi-Doval doctrine, as it has been termed in the media, will be known only over the long-term.