The Man Who Painted Time 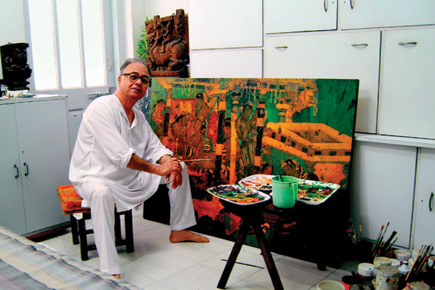 For nearly 40 years, he was India’s bestselling artist, his paintings marking your days and months.


From 1963 till I ended my career as a calendar artist in 2002, I was the highest-selling painter in India. My paintings were in shops, homes, hospitals, offices, in places I couldn’t even think of. That is the power of a calendar. In my nearly 40 year career, 2,700 of my paintings have been reproduced, and there are 800 million reproductions of my works.

I was the first painter in Meerut, my hometown in Uttar Pradesh. Did I always know I wanted to be an artist? Insecurity and an inferiority complex have been my life-long friends. And because of them, I was always attracted to anything that made me popular. As a boy from a lower middle-class family, I realised quickly that my well-off school friends included me in their group because I could draw. And since painting was a talent that got me the attention I craved, I decided to stick with it. (Besides, I was bad in every other subject.) I was married by the age of 18 and a father by 19; my wife was 16. To take care of the family, I took art and hobby classes. Most of my students—they paid Rs 6 a month as fees—were young women who had no interest in art. They were trying to pass their time between college and marriage.

Tired of teaching, I sent some samples of my work to the erstwhile Dharam Yug, a Times of India publication. In 1954, they published my piece, Satyavan Savitri. After that, they asked me to illustrate the works of several great poets of the time, like Harivansh Rai Bachchan. In 1958, I received a letter from a place I didn’t recognise—Dhulia. The person who wrote said he’d seen my paintings in Dharam Yug and asked me to take my work to Dhulia so he could buy it. They sent Rs 80 by telegraphic money order, and we left Meerut for the first time for Dhulia, which we found out was in Maharashtra. I sold a few paintings to Seth Maganlal Motilal, a local industrialist, and for the first time in my life saw Rs 5,000.

On the way back to Meerut, I stopped in Nagpur to meet two famous offset printers. I sold five paintings to them and returned to Meerut. After a year, one of those pictures, Shiv Pooja, was printed on a calendar that sold 600,000 copies. After its success, I got a job offer from Bombay Fine Arts Offset and Litho Works to work for them in Bombay. They offered me Rs 1,500 as salary and Rs 300 as rent. I came to Bombay in January 1959.

Calendar art is not the sort of thing you start off wanting to do. It just happened. I had no guru; I learned from books. Calendars were popular back then because no other medium offered cheap, yet constant, 365-day-long advertisement like a calendar. A calendar retailed for about Rs 2 or Rs 3, but it became a company’s main instrument of publicity.

Calendar art has only one important rule: it has to be easy on the eye, and head. Its beauty has to be simple. After the year was over, if you liked a picture, then you cut it out, framed it, and put it up on the wall. The last series I painted was on medicinal herbs for the Himalaya Drug Company. Those pictures now adorn the wall of the Poddar Medical Trust in Mumbai.

I didn’t restrict myself to any particular subject. I painted mythological characters, adivasis, children. Britannia biscuits even wanted paintings of bathing beauties for their calendar. Before the shooting of Satyam Shivam Sundaram, Raj Kapoorsaab asked for a meeting with me through his brother-in-law, a friend of mine. Kapoorsaab wanted his heroine, Roopa, Zeenat Aman’s character in the film, to be sensual without being vulgar. He asked me to help him, and Roopa was based on my painting of a Dang-area girl. After that, I photographed several upcoming Bollywood actresses so I could use the shots as models for my paintings. It was in the days before people had portfolios. One of my models was a 16-year-old girl called Madhuri Dixit.

Consumer goods firms depend on average families, who are mostly interested in calendars with pictures of gods. Shopkeepers and businessmen want mythological characters on their walls. Progressive, educated clients had evolved aesthetics; they wanted socially conscious subjects on their calendars. For a company like Advani Oerlikon, a Mumbai-based engineering firm, I did paintings of tribals, and portraits of rural subjects. I travelled a lot or sent assistants to shoot pictures for reference. (Bal Thackeray saab once commented that my paintings seemed so real it was as if I’d coloured a photograph.) I now have thousands of photographs of tribals in my collection. I drew on kent paper set up on a mount, with Windsor & Newton or Pelican poster colours.

Once I became an established name in the business, life was easy. I made paintings for Murphy Radio for 17 years, Britannia biscuits for 16 years, and several other companies. Each of these companies produced 4-500,000 prints of each calendar. Every year, I painted more than 100 pieces. There were times when I completed a painting in a day.

In those days, nobody thought about copyright issues. As soon as I made a painting for a company, it became their property, and they were allowed to make as many reproductions as possible. I was foolish. After I set up my own firm, Design-O-Print, in 1985, I stopped being a fool. I retained the rights to everything I made, and gave my client one-year rights to reproduction. I shut my company in 2002. By then, there was little retail sales of calendars, and only about 10 per cent of the companies that once requisitioned calendars now wanted them. Now only people like Vijay Mallya make calendars. But it’s nice, the girls are pretty. If someone gave me one, I would take it. Though, at 78 years, I may not put it up on my wall.

In 2006, the dean of JJ School of Fine Arts asked me to exhibit my works. Some 8,000 people came, they recognised my signature, and I realised the importance of an exhibition. It marked my rebirth as a painter. Since then, I’ve been painting non-stop for three years, and my next exhibition will have 140 large acrylic-on-canvas works. I will also show my calendar art, but it’s not for sale. I want it to get older, mature. Hard to imagine you could once buy a calendar with the same painting for Rs 3.

JP Singhal will exhibit his latest works at Jehangir Art Gallery in Mumbai till 2 March.

As told to Manju Sara Rajan