No More Goddesses, Please. Bring in the Sluts

The ‘Abused Goddesses’ ad campaign on domestic violence is appalling and terrifying. By deifying women, it strips them of individuality, sexuality and power 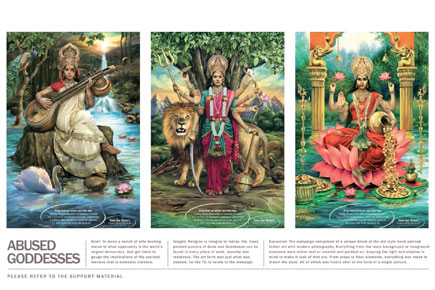 The ‘Abused Goddesses’ ad campaign on domestic violence is appalling and terrifying.


A compelling image of a physically abused Hindu goddess has recently been swirling through social networking sites. At first glance, it is just a familiar face: that of Durga, in all her glorious finery, glistening headgear and lustrous eyes. At second look, the horror hits home: this is a female model dressed up as Durga, her clear cheek and forehead emblazoned with angry whiplash bruises. A smudged line of kohl below one eye betrays her pain. Durga, beloved among the Hindu pantheon of goddesses, iconic daughter, wife, mother, protector and creator, carries in this enacted, transformed image the burden of pan-Indian consciousness-raising about domestic violence against women, a savaging that both romances divinity and wounds it irretrievably.

In this campaign by Save Our Sisters, an anti sex-trafficking initiative, other models re-enact the battered yet statuesque glories of Saraswati and Lakshmi, graphic images of mutilation that elicit an immediate response of total recoil. While many effusively laud the campaign for boldly using a loathsome cultural shocker to jolt brutalising men, others deride it for reasons that could be activist-feminist or economic or aesthetic. Then some ask whether the advertisement may not be effective in converting the ‘masses’ through shock value alone, despite its images being objectionable. Others offer nuanced, intellectual arguments on the efficacy of the image itself as a critique of the very patriarchy it depicts. There is also a discussion of the cultural mnemonic, to see the goddess figure in its pre-modern, anti-Enlightenment mode as a symbol of the transgressive rituals of society that defy all questions on the rights of, and justice for, women—and whether, therefore, reading the emblem as an enforced deification that is demeaning to contemporary women disallows all potential for stepping outside the rule of law in society.

In response to these conflicted cogitations on the ‘Abused Goddesses’ campaign, I want to think through the ideas that will stay with us along with these hideous images, in the thick as we now are of debates on risk and safety for women—inside and outside the home. My first reaction was one of disgust at the blatant appeal to Hindu sentiment to secure safety in the conjugal home. Ah, I said with rhetorical flourish on Facebook, ‘Right. Put her right up there with Durga and her daughters, worship her, strip her of individuality, sexuality, emotion, agency, power, politics. And if/when she is raped, beaten, silenced—Save her, of course: she is your Sister.’ I also said I was disturbed to see many men in mea culpa mode while circulating the link for the advertisement (as Indian men have increasingly been in the wake of rapes since 16 December), and many women apparently undismayed to be likened to bruised Kumortuli clay figurines in glorious technicolour. I was not alone in this reaction. But this is not to claim that women who felt instinctively that the campaign had done something right in making female models impersonate handpicked gentle, nurturing, battered Hindu goddesses were out on a limb—in fact, from what I had seen till then, most women were comfortable with the images because they strongly believed that they served their didactic purpose.

Some others thought the objections I had raised to this campaign were peripheral to other questions like who had made money out of this obviously offensive advertisement, and that I should not read it on my own academic/feminist/activist terms but try to gauge the impact it could have on ‘the masses’—that ubiquitous sea of vagabond, lecherous, exploitative, violent men who had no time to waste on niceties such as agency, individuality, sexuality or power for their women. While these arguments did not seem to me to be worthy of the point of the debate, I was more intrigued by the proposition that one should see the images in isolation from their lexicon of accompanying words or the history of the campaign’s original sponsors (which had by now piggybacked on social networking sites to far greater effect). This appealed fugitively, but left me irreconcilably uncomfortable about reading such inflammatory images shorn of their repugnant contexts. Another complex suggestion that made me think—the image of a goddess, a primitive/mythic concept, should be analysed as a symbolic cornucopia of excess, and so be allowed to transgress post-Enlightenment (non)virtues of choice, sensibility, understanding, responsibility and justice.

The last two have made me wander down the knotted path of cultural memory, politics, history, feminism and viewer-response theories again. Were the questions that slapped me in the face upon first encounter with the advertisement of no relevance to the response I ought to have to a visual media image I should analyse—for aesthetic content, history, myth, irony, symbolism, effect, economy? What about all those further questions that chased the first ones, fuelled by exchanges with friends and acquaintances—Why is she Hindu? Why is she a goddess and not a slut? Why is she Durga/Saraswati/Laskhmi and not Kali, whose nude monstrosity makes genteel society squeamish at the best of times? If she was a slut/monster, would she be worthy of being saved in society’s terms? And why does she need to be ‘saved’, in that most patriarchal rhetoric? And what does one do with such gnawing responses to the text at hand when confronted by the demand to put it in the intellectual tradition of centuries, to distance oneself from the immediate reaction of rage and disgust at being deified into a non-being, to rationalise it by understanding what a primitive goddess has meant in the spreading teeming culture of the land? Must there be ways to interpret such images that need not elicit knee-jerk dehistoricised, contemporised responses from women, even if those women are sick to the stomach at being—collectively, metaphorically—feted and worshipped with garlands on a Tuesday and then kicked brutally around the room on Sabbath?

It is probably true that I am doing my training as an academic an injustice when, despite giving myself pause and thinking deeply about resoundingly convincing interventions from different quarters, I must profess myself to be bull-headed enough to be unconvinced when I emerge from that process of intellectual engagement with the many-splendoured universe of a visual image that enrages and terrifies me, both. I realise that I am transgressing a particular set of rational requirements set upon the academic when confronted with a viscerally scalping dilemma and asked to turn and re-turn it like a Rubik’s Cube, see it in light and shade, and then to think about what colour, height, weight and opacity has meant in the impressively convoluted history of the physical sciences. I find, alas, that the Rubik’s Cube transforms into a kaleidoscope, it dazzles with its immediacy of sparkle and sizzle, it numbs my reason and wakes me up to my skin-and-senses response to a representation of women in the world we inhabit that appalls me. And for those who have said consider the masses and classes of men who think through their loins, who are sexually and intellectually depraved, who have never heard of female agency and consider their women to be chattels, I am alarmed and discomfited. I think we so easily humiliate and infantilise those masses of men, we equate literacy with knowledge and assume that education ensures sophistication in matters of the heart and genitals. And yet we know statistically that domestic violence is rampant in higher educated wealthy homes. So if we send men—any men, all men—the signal that we should worship women as (docile, happy Hindu) goddesses, and/or that since we (should, or profess to) worship women as goddesses, we should not hit them or kick them, we are telling them to consign and condemn their women to safe oblivion. And we are also telling them that any time their women fall short of their assigned roles as domestic goddesses, they can be abused for that original sin.

Even if I were not to take into consideration the peripherals of this set of images—that it is part of a dubious advertising campaign by a sort of anti sex-trafficking organisation called Save Our Sisters that is politically unacceptable to me, that it puts out a helpline number with every image and comes accompanied with an explosively-regressive text—‘Pray that we never see this day. Today, more than 68% of women in India are victims of domestic violence. Tomorrow, it seems like no woman shall be spared. Not even the ones we pray to'—the garish calendar-art images spreading awareness about domestic violence against women seems to me to be gut-wrenchingly all wrong. I would have reacted with far greater respect to an image of a GB Road whore wounded by a male client’s aggression and torment had that picture said to me: ‘Let us ensure that we never see this day.’ There is, I believe, no man or woman who does not know—at least imaginatively—how completely helpless one is when protected by chains of respect and worship. That distinction, for women especially—between goddess and slut, the angel in the house and the whore on the street—is what guarantees safety, loyalty, fidelity and love; it smothers her and waves her on to a fate worse than death. Not simply because it bores her to tears, but because it is a finely-honed art of possession and control. It strips her of passion and desire and transgressive possibilities. It deprives her of risk and so the remotest imaginings of pleasure.

Satyajit Ray’s Devi (The Goddess, 1960) visualises powerfully the trauma of a family in which a young and beautiful bride, Doyamoyee, appears to her father-in-law as Goddess Kali. The implication of Kali (rather than any of the more benign Hindu goddesses) inserts a different kind of fraughtness into the male fantasy, which is further complicated by Doyamoyee going insane in the course of being thus worshipped and frenziedly refusing to be rescued from this predicament by her tormented husband. It is a world of tantalising evil, of irrational fears and excessive fancies—which transgresses reason and safety. But in this compelling tale about a Hindu household, Doyamoyee is entirely controlled by a patriarch’s dreams and desires of greatness and power in his petty neighbourhood, and she is propelled like a sleepwalker through her assigned performance as a goddess, which she is unable to leave of her own accord. She is rendered completely powerless by being conferred a divinity she does not really possess, and in this bestowal she is deprived of any chance to pursue her own passions or fantasies. One wonders what may have transpired had Doyamoyee been imagined as a whore by her father-in-law rather than a goddess. What dangers and what risks might she have courted then! But perhaps, what pleasures—fleeting—of freedom, gifted to her body and soul she may have encountered too, and in those moments of irrational and transformative excess, she would have lived another life.

No more goddesses, please. Bring on the sluts.