How My Conscience Was Abducted in Dantewada

In the garb of social responsibility, the Essar Group recently organised a storytelling festival for the ‘benefit’ of children in this Maoist-dense area. Apart from the organisers’ poorly disguised disdain for local artistes, what emerged most starkly was the stench of corporate propaganda 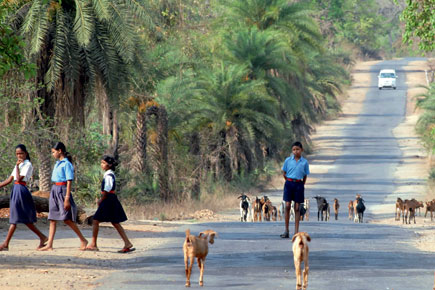 
The colour of money, I am told, can be ignored if used for social causes. Mother Teresa had this way of relieving us of our guilt; when questioned about a donation she’d accepted from a Colombian drug lord, she said that as long as the money was put to good use, it would redeem the giver. I wish I were Mother Teresa, and I wish coloured money didn’t leave stains. But it does. More often than not, attempts are made to make us believe otherwise. The stories of these attempts are far too many and far too simple for us not to notice. I was part of one such story just recently.

The scorching sun was no deterrent for the hundreds of children gathered together for the first-ever Essar Kahani Utsav, organised from 17 to 19 April in Dantewada (a district in Chhattisgarh where the media and government celebrate their own attempts at storytelling). They were used to the heat and this was their day out—a fantastic picnic party that the rich sponsors had thrown for them. Set aside the fact that the children had never been on a bus before and many were throwing up or fainting, this was a rare moment in history. They were going to be part of a celebration, a novel idea for cultural upliftment, a feather in the cap of the district administration and of the Essar Group, which claims to provide the children with ‘a better future’.

Money was not the only thing coloured there. Long pieces of cloth in different colours hanging outside the venue— in classic Teamwork Productions style (the event management company organising this festival)—conjured a sense of celebration. The packaging was good. It mostly is—like that of the DSC Jaipur Literature Festival, also organised by the same company.

The mood inside, though, didn’t match. That is, if you set aside the sight of visibly uninterested festival organisers and district administrators finding ways to pat their backs. And there was certainly no festive air around the 600-odd Adivasi children who had travelled hours on foot and buses to hear stories on an empty stomach—“the district administration miscalculated the numbers”, the organisers explained to me later, and so they had run out of food for the children.

This festival did not have loud-voiced liberals defending freedom of speech, or international celebrities speaking of exotic life-altering journeys to India. That is for the urban chic. What it did have were the smells of freshly whitewashed walls and 600 children sweating it out in the Chhattisgarh summer sun, and the stench of corporate propaganda. Children were made to listen to the three-fold initiative of Essar Foundation to help the area ‘develop education, health and livelihood’, as well as to someone like me, unwittingly prostituting myself to earn them a noble face. The young district collector (not the one to be abducted soon after the festival), whose plains-clothed security personnel reminded me of a scene from daku movies of the 1970s, was grinning from ear to ear. He declared how thrilled he was at the idea of the Rs 3 crore that he could “now spend with the help of Essar Foundation”. He also made a mention of letting “bygones be bygones”, perhaps an indication of things to come.

The Kahani Utsav began an hour-and-a-half late—something that the organisers would have been most concerned about at their high-profile festival in Jaipur. The children clapped, after some insistent prompting—“taali bajao” —by the organisers.

What makes us fawn over this idea of cultural intervention, of celebrating the arts, of spawning one festival after another? Why can’t we pause to see if there is a need at all? What makes these corporations—almost all of them by now ‘socially responsible’—so convinced they are ‘making a difference’? The presumably deliberate omission on Teamwork’s part to mention to me that Essar was a sponsor was a vile tactic, leaving the likes of me divided over whether to walk out or stick around for the sake of the barefoot children, who, though completely overwhelmed, were there and expectant. That most of them did not comprehend Hindi, the language I was supposed to tell them stories in and get them to tell stories in too, didn’t seem to bother the organisers. There was enough tokenism by way of a few local artistes and some dance and song. Their apology to me, ambiguously stated that they themselves had no idea that Hindi would be “such a stumbling block”. Obviously, no one had bothered to figure out the reality on the ground. That no one thought it necessary to understand and respect the need illustrates how little they actually care about people in such a ‘remote’ place. Anything you throw their way is supposed to help them ‘develop’. The money is there to be used, to signify that someone at least ‘cares’.

As for the local artistes, the blatant discrimination so common in most cultural spaces and festivals in India was on display here too. Sharing my taxi with some artistes from Raipur, I was not too surprised to find out that they were being paid less than me, ‘a city artiste’. The different lodgings—the circuit house and the ‘other’ guesthouse—were explained by the organisers as the result of a “paucity” of rooms.

As one would expect in such cases, the Essar Foundation wouldn’t start the festival till the collector turned up. And while the collector was busy being late, the ‘local’ underpaid artistes were used as fillers to sing songs for the bored children. And, of course, they were as easily told to stop their performance midway when the collector eventually made his appearance. The officer’s arrival, Essar Foundation’s 30-minute sermon, and lighting of diyas became more important than the singer who was telling a Chhattisgarhi tale. As if this was not enough, the organisers, by now behaving like feudal moneylenders, decided unilaterally to slash the fees of the local artistes by half (which they also attempted with me), since they were being asked to leave a day earlier for strange logistical reasons.

The Essar Foundation representatives resembled wedding managers as they paced up and down the venue. One of them approached some schoolteachers seated next to me and asked, “I am from Essar. This is a really important initiative. Are you all happy?” I was amazed at the silent defiance of these teachers. I overheard ‘Essar’ interspersed in the local dialect after the official left. No one was buying its stale soundbytes. A report on the Essar site, however, claims they ‘heard them saying that such [an] event has been [the] first of its kind in the district’.

The children were a different story. Completely overwhelmed by what they were being put through, they maintained an eerie silence. I have never come across such a large group of children who made so little noise. Was this some form of passive resistance? Was it because the organisers ran out of lunch for the children? Or was it the forced habit of rote-learning that made them only repeat what was said or raise their hands (both of which they did with mechanical eagerness)? A cameraman, flown in by Essar Foundation, was busy shooting footage that the bosses could edit and put on their website as a misleading testimony of the festival’s ‘success’ (see https://www.essar.com/playvideo.aspx?cont_id=Hvv9vMY/FX8=). He was there just for the first day, “for the next day would only have been the same stuff”. The joy on the faces of the Essar staff on seeing their photograph in a local newspaper characterised the whole point of their efforts. I was also later emailed some pictures of smiling and dancing children. But I know how much actual storytelling happened even as they were forced to dance to Bollywood tunes. A report put up on the Essar website after the festival chose to omit the names of any of the local storytellers and other artistes. With their lack of Padma Shri credentials, they were deemed unworthy of any mention.

The organisers had barred us from leaving the guesthouse after 6 pm (a rule they, too, didn’t adhere to). So, venturing out on late-night strolls on the badly-lit streets of Dantewada, we predictably discussed Maoists in hushed tones. There were jokes about the possibility of urban artistes like us getting kidnapped by Maoists. We were not kidnapped, but by attending the Essar Kahani Utsav, we had surely allowed our consciences to be abducted.

We lamented the complete lack of purpose in what we were there for. A Kahani Utsav to make children laugh? A festival to pay lip service to ‘culture’? To become another photograph in a brochure for Essar Foundation? To join the growing list of the festival mafia? To become the local administration’s trophy for villagers? To tell poor children to clap their hands every five minutes so that  noise may drown out the murmurs of our conscience? Why do we need a story-telling festival in Dantewada? And if we do, should we not at least understand or appreciate the sensitive nature of the place? When I raised these issues with the organisers, they did email an apology saying they should have handled the whole affair with ‘more sensitivity’.

These are questions I left the place with and am now sharing with a wider audience. The children will go back to their villages. Some will pick up arms, others will work at factories Essar and others will surely set up. There will be more sweaty afternoons and more diyas lit. The government will shake hands with corporations and promise better education, health and livelihood. The story will go on.