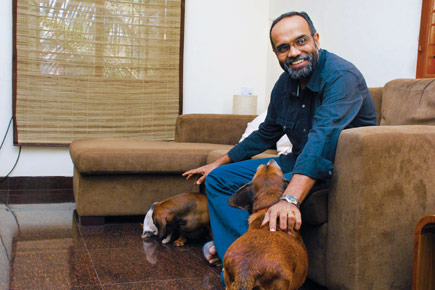 Between 1977 and 1981, while I was doing my five-year stretch to earn a Master’s degree, I must have passed Delhi at least 25 times, and, on at least 20 of those occasions, visited Shop No 42, Shankar Market, Connaught Place, a second-hand bookshop run by an old white-haired man named, if I remember right, Ram Gopal Sharma.

The first time I went there, I told Mr Sharma that I didn’t have much money to spend. He looked me up and down, noting the jeans and the cheap slippers and straggly beard, and gave a dismissive grunt. But half an hour later, when I went up to him with half-a-dozen battered paperbacks in my hand, he gave me a good deal on them.

Most of the summer of 1979, a college friend had been raving about Le Carré and The Honourable Schoolboy, and when I saw TTSS, I picked it up immediately. All the thrillers I’d read until then had contained large amounts of blood and thunder, and very little clear cerebration. TTSS was immediately different: even to a teenager, it seemed intelligent and authentic, and, though almost all the violence took place offstage, it was as gripping as any cops-and-robbers story.

This, then, was my introduction to spy books of a different kind. I took care, from then on, to read every Le Carré book I could get my hands on. But then, I never thought of them as thrillers, except The Spy Who Came in from the Cold. I considered them literary fiction, primarily because of the quality of Le Carré’s writing.

When, a decade and a half after reading TTSS, I got around to writing my first thriller, it was Le Carré that came to mind. There were some little problems, though. In the first place, in my opinion, he wrote literary fiction. In the second, the depth of his knowledge of institutions, the content of the work of the people who ran them and worked in them, of geography—in a word, the authenticity of his writing—seemed to be at a different level altogether. I tried, then, to make my own book as authentic as I could, putting in key details that I thought might make parts of it real to the reader, even though it was a very different kind of book.

And then, in 1998, I happened to re-read Le Carré’s Our Game. For those of you who haven’t read it, it’s about one of spymaster George Smiley’s—Smiley is plump, bespectacled and cuckolded—students, Ned, lecturing at Sarratt, the school for spies in Le Carré’s Smiley books. Ned talks of cases of times gone by and, as he speaks, his memories take him back in time to the cases themselves. It’s a drifting, beautiful narrative, and had Le Carre been writing in any other genre, he would have been in contention for a major literary award, not restricted to thrillers.

At the time, I was struggling with my book on Travancore’s last hangman (Hangman’s Journal, Viking). I’d piled up enough material for several books on the subject, yet, after 16 months on the job, hadn’t been able to think of a framework that would get a substantial amount of that material to hang together as a book. I’d tried different forms of narrative, using third person at first and then first person, but none of it worked. The fundamental problem, as I saw it then, was sequence. The moment I tried to put the narrative in some kind of chronological order, the book died. The words were there, but they seemed lifeless, forced even.

Meanwhile, an uncle, my father’s youngest brother, who’d been based near the hangman’s hometown, and who’d had supported and encouraged me throughout the weary months of researching the book, had died. I’d had to go back to Nagercoil several times to settle his property and, on one of my last visits there, I took the night train from Trichur, near my own hometown.

Lying half-awake in a lower berth, I went into a sort of drifting reverie, remembering my last visit to one of the king’s palaces at Padmanabhapuram, where, in a large bright hall, are exhibited the instruments of torture used by the king’s henchmen. I thought of the hangman visiting that room and finding at least a partial resolution of the conflicts I gathered he’d been through. Halfway through that reverie, I remembered the stories in Our Game and, in a flash, the structure fell into place, as did the character of the hangman himself. The reverie ended, I was wide awake and, thankfully, remembered everything that had struck me.

Much detailed work remained, though. The material had to be arranged, and the book written, but the key bits fell into place in perhaps 15 minutes towards midnight as the train rattled its way south along the coast and the mountains. I didn’t sleep a wink that night, and, when the train reached Nagercoil soon after sunrise, I found my way to a hotel and, waiting only to brush my teeth, brought out the notepad I carry around, and started making frantic notes.

Even as I wrote, I became aware of the deficiencies in my research. I’d concentrated on the hangman himself, and now found I needed material on the other people in his life, and decided then to fictionalise some of it. The hangman had had just three years of schooling, and was unlikely to indulge in much philosophising. There had to be some character in the book to awaken his philosophical side. I thought of Ned’s lectures, and the character popped up in my mind full-grown: the schoolmaster, who had seemed all-powerful within the confines of the tiny village school, but outside it, as the hangman saw decades later, was a henpecked husband.

The hangman’s widow, whom I’d met, also gained more flesh and blood as the story developed in my mind, and I realised happily that I did have enough material on her.

Just two months later, I’d completed the first draft of the book, some 80,000 words. I wasn’t happy with it: it needed substantial editing, I thought. I sent it off to Ravi Singh at Penguin rather apologetically. To help clear any doubts he might have from my brief description of the gallows, I included a hasty little diagram of the gallows where the hangman had done his deadly work. Two weeks later, I was pleasantly surprised when Ravi wrote back enthusiastically about the manuscript, mentioning that he planned to use the diagram as well!

Ravi trimmed the flab from the draft, making the book some ten times as readable as it had been before he got his hands on it. I suppose I should stop here, but I must mention that Ravi used the diagram without alteration, and, since it was clearly done by an amateur, I didn’t mention the mistake it contained (it’s only half as broad as it should be and, therefore, out of scale). No critic has yet, publicly or otherwise, brought up the lapse, so clearly the diagram has either gone down well or the error passed unnoticed.