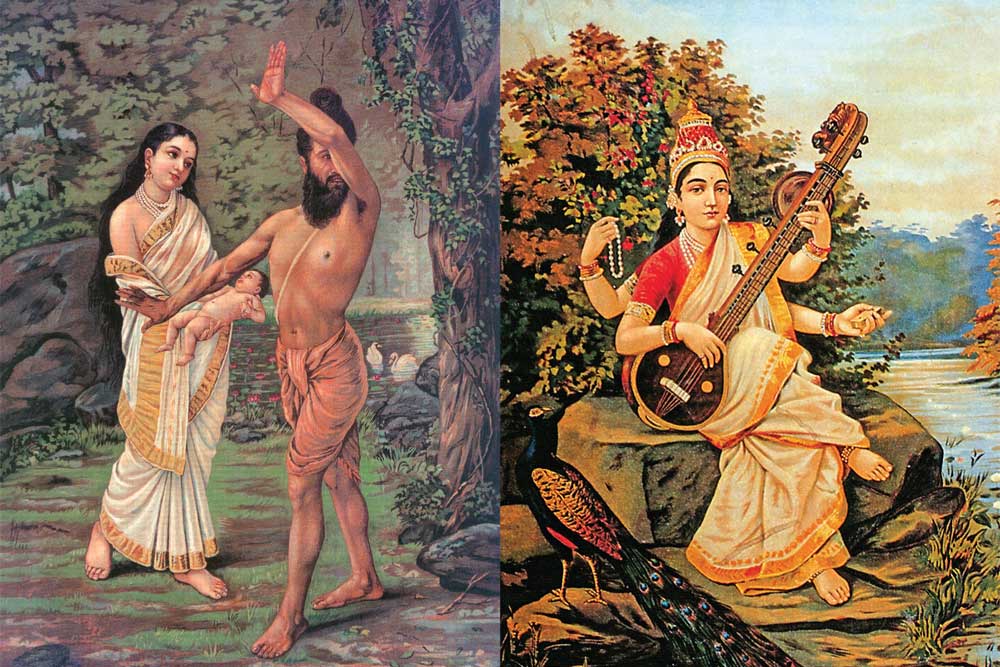 (Left to Right) The Birth of Shakuntala and Saraswati


TILL THE 19TH century, gods lived in temples built by the rich and the royal. Entrance to the temples was restricted to the upper castes, till the Travancore Temple Entry Proclamation of 1936. Apart from the beautiful art on temple walls, royalty and nobility commissioned paintings—miniatures, Tanjore style paintings and others—to adorn their walls. All this left the poor and lower castes bereft of access to religious icons.

But one man was to change it all. Raja Ravi Varma was born in Kilimanoor in Travancore, Kerala, in 1848. He came from a family of intellectuals, his father being a Sanskrit scholar and an authority on the Vedas, and his mother highly erudite. He was taught Malayalam and Sanskrit and later English, and grew up listening to Vedic hymns, classical music and dance.

At the age of 13, he was presented before the Maharaja of Travancore, Aayilyam Thirunaal, who gave the young boy permission to use the palace library and develop his love for drawing and painting. It was here that Ravi Varma observed the court painters work with the new medium of oil paints. Seeing books on Italian paintings, he was thrilled to find that the three-dimensional paintings in the palace collection were quite different from the mural paintings he had seen on the walls of the temples. He wished he could obtain mastery over the European techniques of chiaroscuro and perspective with the help of the palace artist Ramaswamy Naicker. But Ramaswamy Naicker refused to teach him. Theodore Jensen, a Dutch painter at the court, was requested by the Maharaja to teach this young boy some lessons in the intricacies of the European style of academic realism. Jensen also turned down the request to teach, but he allowed Ravi Varma to observe him as he painted. Apart from Western realism, Ravi Varma was influenced by Tanjore painting and Indian theatre, the last in his depictions of prosceniums and props which formed the backdrops of his paintings.

Ravi Varma took nine years to master the principles of perspective and colour mixing, particularly the medium of oil on canvas. In 1881, Raja Ravi Varma and his brother Raja Raja Varma were invited by the Gaekwad of Baroda. In 1888, the Gaekwad commissioned him to paint 14 paintings on the Ramayana and the Mahabharata. The epics had come alive. But these paintings remained in the private collections of royalty and the nobility.


Ravi Varma wanted his paintings to be made available to the common man and by 1880 there was a demand for copies of his paintings, which were not easy to reproduce. Then Dewan Sir T Madhava Rao of Travancore wrote to Ravi Varma in 1884 saying that it would be hardly possible for Ravi Varma, with only a single pair of hands, to meet such a large demand. He therefore suggested that Ravi Varma should send a few of his select works to Europe and have them oleographed. Like Ravi Varma, whose original paintings belonged to Indian royalty and nobility, Sir T Madhava Rao too felt that it was not fair that the art could not reach the common man.

However, nothing was done till 1894 when Raja Ravi Varma and his brother Raja Raja Varma sent their agent to search for a person to set up and run an oleograph press in India. Raja Raja Varma went into partnership with Govardhandas Khatau Makhanji and set up the Ravi Varma Fine Arts Lithographic Press in Girgaum, Bombay. The first oleograph—The Birth of Shakuntala—rolled out on July 12th, 1894, and was sold for a princely sum of Rs 6. This was followed by Laxmi and later Saraswati, both sold for Rs 2 each. For the first time, paintings of epic and Puranic stories, which had been restricted to the upper castes, came out of the temples and homes of royalty and nobility. People could afford to hang up the gods and stories from the epics on the walls of their homes. His model was a young Goan lady called Rajibai Moolgavkar. Although he used models, Ravi Varma, like all Indian artists, idealised the face of the goddess which had to be perfect and thus did not resemble the models. Let us not forget Ravi Varma was equally influenced by the canons and ideals of Indian art.

2019 is the 125th year of the first coloured print produced in India, a first for which credit is rarely given to Ravi Varma. The coloured litho prints called oleographs are the printed versions of the original paintings and are next to the originals in respect to detail and colouring. It is surprising that in spite of the primitiveness of the printing press—each painting consisted of anything between seven and 30 litho stones—they were able to produce prints of great depth, quality and colouring. Colours were separated and printed several times over till the correct shade was reached, a technique which created depth and shading. The litho press was started in Bombay with an investment of Rs 50,000 and was run by a German, Fritz Schleicher.

Ravi Varma’s oleographs brought art to the reach of the middle class. His paintings featured religious themes, deities, stories from the Ramayana and the Mahabharata, and beautiful women in diverse settings. They were printed in large numbers and sold all over the country, bringing a commonality to the icons and epic figures. Gods and goddesses were recognised across the country, with female figures in six and nine-yard saris.

In Tamil Nadu, it became a popular female pastime to clothe the oleographs in silks and chiffons, with intricate embroidery and even semi-precious stones stitched on to them. Many
Chettiar businessmen took the oleographs to Burma where local Burmese women dressed the women in silk saris and decorated them with zari embroidery.

In 1898, Bombay was hit by the plague and civil unrest, resulting in the shifting of the litho press to Ghatkopar. In 1898, Govardhandas Khatau Makhanji exited the partnership for
Rs 22,000, leaving the press to the sole ownership of his partner Raja Raja Varma. In 1903, the press was sold by Raja Raja Varma to Fritz Schleicher, ‘for a consideration of Rs 25,000 over and above paying all the debts connected with the establishment amounting to Rs 5 or 6 thousand’. Although the enterprise was in the name of Raja Raja Varma, the proprietor of the press was actually Raja Ravi Varma. Finally, the brothers Raja Ravi Varma and Raja Raja Varma passed away in 1905 and 1906 respectively, leaving a legacy of great paintings and prints which, in my opinion, unified Hinduism in India, paving the way for a common imagery.

Ravi Varma’s oleographs brought art to the reach of the middle class. His paintings featured religious themes, deities and stories from the epics

Meanwhile, Fritz Schleicher shortened the name ‘The Ravi Varma Fine Arts Lithographic Press—Bombay’ to ‘F.A.L. Press—Bombay’. He retained the copyright on the oleographs and continued printing them from wherever the press moved: from Bombay to Karla, Lonavla, Malavli, etcetera. He was an enterprising man and used the oleographs for advertisements, calendars, postcards, playing cards, match box covers, etcetera. (I wonder what the Hindutva brigade would say to that.) Later, paintings of other contemporary artists, such as MV Dhurandhar, K Madhava, his brother Raja Raja Varma and others, were also printed by the press. Schleicher died a very rich man, his wealth due to the popularity of and continued demand for the prints. The press continued till it was temporarily closed in 1973 after it was ravaged by a fire, and finally went into oblivion in 1980.

While a lot of research and publications have come out on Raja Ravi Varma’s paintings, not much has been done on the oleographs. D Jegat Ishwari has published an oleographs catalogue, while there are some ardent collectors, such as Ganesh Shivaswamy of Bengaluru who started collecting at the age of 13, set up a website and is now writing a book on the oleographs. The CP Ramaswami Aiyar Foundation in Chennai has a vast collection of 130 oleographs—some rare, some ordinary, some embroidered (including from Burma), some etched on mirrors and some decorated with silver drops.

While Ravi Varma’s paintings are sold for crores in auction houses all over the world, his oleographs are also very popular and in great demand, even after the advent of digital colour printing. His oleographs brought a revolution not only in art, but in religion and society too. They are found in the most varied of places, from small village huts to mighty mansions. Today if we think of a Lakshmi or a Sarasvati, we think of them as they were painted by Ravi Varma. He took art to the common man and created a silent socio-religious revolution in India. 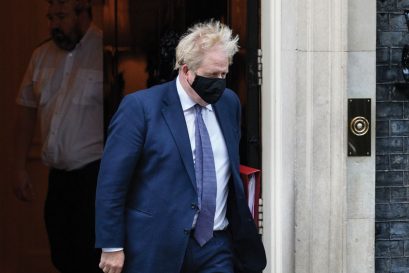 The Party is Over

The writer, a former Downing Street insider, charts Boris Johnson’s descent into a political hell he is unlikely to survive 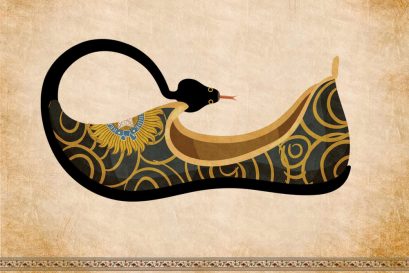 Justice Pulbandi and the hanged Maharaja 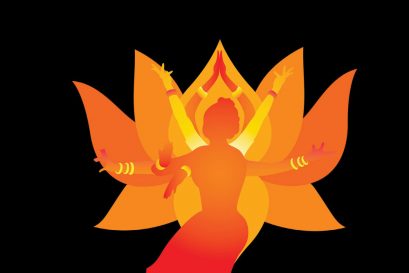 A clash of feminisms