The Limits of Autonomy Politics 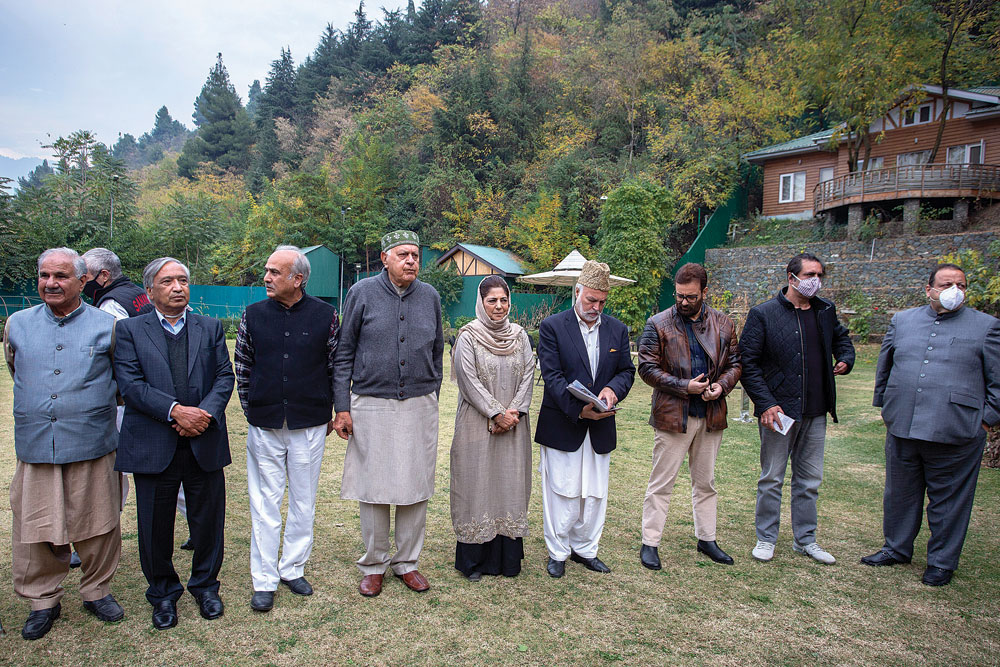 
There is a popular saying that what happens in Kashmir is not visible and what is visible is scarcely real. But the coming together of bitter political rivals to fight the state’s first elections after the constitutional changes of August 5th, 2019 was an anti-climax of sorts. After days of intense
bickering with no sign of seat-sharing, the hastily cobbled together ‘People’s Alliance for Gupkar Declaration’ (PAGD), an amalgam of Kashmir’s ‘mainstream’ parties, finally agreed to a seat-sharing agreement.

So far, PAGD has released lists of candidates for five out of eight phases for the District Development Council (DDC) elections to be held beginning November 28th. The days before the announcement of seats for the first phase were marked by inconclusive meetings stretched over days. Two days after the first list was released, on November 12th, People’s Democratic Party (PDP) leader and former Chief Minister Mehbooba Mufti decried in a tweet that, ‘PAGD was formed solely to safeguard the identity of people of J&K that’s been under constant attack since Aug 2019. To assume it was created for purely electoral gains or to further party interests is erroneous. We have a bigger cause to fight for than bicker over DDC elections.’ After Mufti’s tweet, Jammu & Kashmir People’s Conference (PC) chief Sajjad Gani Lone tweeted, ‘I agree with every word and would further add that the reality as it exists is that statesmanship and magnanimity is still a missing trait in our polity. And the absence is being felt more than any other time.’

THE PROBLEM of Kashmir’s politics since the abrogation of Article 370 is one of too little scope and too much competition at the same time for these parties. All the key leaders were under preventive detention for a long period since August 5th last year. By the time they came out, the politics of Jammu and Kashmir (J&K) had changed dramatically. J&K was no longer a state and a delimitation commission was appointed in March this year to delimit Assembly constituencies in the Union Territory (UT). As a result, there was little chance that Assembly elections could be held before the commission submitted its report. The time given to the commission was one year. The Union Government, meanwhile, amended the Jammu and Kashmir Panchayati Raj Act, 1989 and provided for direct elections to DDCs that were earlier not elected bodies. In the absence of Assembly elections, pending delimitation, DDCs are the vehicle for political activity in the UT.

This put the ‘mainstream’ parties in a quandary. The focus of PAGD’s politics was the restoration of Article 370 and statehood to J&K and these parties were loath to give up that pursuit. In her first press conference after her release, Mufti said: “My flag is this (pointing to the J&K flag on the table). When this flag comes back, we’ll raise that flag (Tricolour) too. Until we get our own flag back, we won’t raise any other flag…This flag forged our relationship with that flag.” Taking a slightly different tack, former Chief Minister Omar Abdullah wrote in an op-ed in July: ‘As for me, I am very clear that while J&K remains a Union Territory I will not be contesting any Assembly elections.

Having been a member of the most empowered Assembly in the land and that, too, as the leader of that Assembly for six years, I simply cannot and will not be a member of a House that has been disempowered the way ours has.’

Come November, these positions changed dramatically. Both parties agreed to participate in DDC elections along with other parties such as PC, Awami National Conference (ANC) and Jammu and Kashmir People’s Movement (JKPM). These parties faced a stark choice: either participate in DDC elections or risk irrelevance. But a face saver had to be found after the lofty words of the first and second Gupkar Declarations, in August last year just before Article 370 was abrogated and in October this year after these leaders gathered under a single banner. The excuse was provided by Apni Party, a fledgling political outfit led by a former PDP legislator, Altaf Bukhari.


Derisively called a ‘King’s Party’—an allegation that Bukhari’s outfit was ‘sponsored’ by BJP—PAGD now took the tack that it was important to check BJP’s ‘advance’ in Kashmir. As excuses go, this one is hardly believable. BJP remains confined to the Jammu region—which has a substantial presence of Hindus—and has little purchase in the Kashmir Valley, in spite of its efforts in the last one year to build a base there.

The real issue is that of remaining politically solvent. Unless PDP and National Conference (NC) continue to engage in democratic politics, they risk getting sidelined as new political formations emerge. The problem for them is that there is little ‘product differentiation’ between the two parties. Writing in Greater Kashmir in August this year, Haseeb Drabu, a former finance minister of J&K, said: ‘Two decades back, only NC had a political history and historical baggage. Now, with two three-year stints in government, PDP has also acquired both rather quickly. Idiosyncrasies and individual preferences of their leadership apart, the real differences between the two are personal, not political.’ He went on to describe, in comparative terms, the absence of any ideological and political differences between the two and concluded: ‘Indeed, now NC and PDP are to the political sphere of Kashmir, what Lux and Liril are to the marketing world of soap; only packaging is different.’

The result is a political competition that is almost vicious. If one ignores the high-sounding rhetoric, their coming together in an alliance is an attempt to preserve the oligopolistic character of Kashmir’s politics. The distribution of seats for DDC elections reflects that. Of the 102 seats announced so far (until the fifth phase), NC has 47 candidates, PDP 32, PC 12 and the remaining seats have gone to small parties, including two to the CPM that has a pocket of influence in South Kashmir. The relative geographic spread of these seats also reflects the scattered social base of these parties: NC—because of its historical record of land reforms—has pockets of influence across the valley while PDP has its base in South Kashmir. But the overall pattern is one of a classic two-party system where the parties have few differences and are clustered around the median on a core issue. In Kashmir, it is the politics of autonomy, reflecting an equilibrium of sorts.

By November, the hardline positions had changed dramatically. Both PDP and National Conference agreed to participate in DDC elections along with other parties. They faced a stark choice: either participate in DDC elections or risk irrelevance. The real issue is that of remaining politically solvent. Unless PDP and National Conference continue to engage in democratic politics, they risk getting sidelined as new political formations emerge

It is interesting to note that, so far, PAGD has not announced any seat-sharing for the Jammu region where both NC and PDP vie with each other for the Muslim vote. This remains one of the sticking points among members of the coalition. In the lists released so far, Congress has also been given three seats. While its national spokespersons were at pains to maintain distance with PAGD, the party was allotted the Zaingeer (Baramulla), Tral (Pulwama) and Shangus (Anantnag) seats in the second phase of the DDC elections.

WHEN THE amendments to the Jammu and Kashmir Panchayati Raj Act were announced in October, there was considerable scepticism from quarters used to ‘politics as usual’ in the erstwhile state. The trend, at least from the late 1990s, was for either NC or PDP to ally with a national party, Congress or BJP, to form a government. The national parties, while partners in these governments, had little influence beyond a point. The presence of terrorism in J&K was a useful lever in the hands of the parties in the state. The moment an issue went against the interests of these parties, a cry would go up that the Kashmir problem could be ‘solved’ only by negotiating with Pakistan. That this suggestion would come from impeccably ‘pro-India’ parties never attracted negative attention. The blame for the mess in J&K was always laid at the Union Government’s door. Blaming ‘agencies’—a euphemism for Central intelligence agencies—was another favourite tactic to divert attention from the shortcomings of the state government. Governance problems—including corruption—were never an issue, or were never allowed to become an issue, when emotive matters like ‘azaadi’ and Pakistan were always at hand.

The reality was always more complex. In Kashmir, the weakest link in politics is the layer between legislators in the state Assembly and the ground level. At this level, the gun ruled the state. Any village, block or district panchayat-level political activity was not only discouraged but actively silenced by killing panchayat members and sarpanches over the years. It was not just terrorists who disliked local-level politics but the state-level elite in Srinagar as well. This symbiotic relationship of sorts served both very well: state leaders could always deflect the blame for anything to Delhi and grassroots political disempowerment fuelled that. For terrorists, it was of overriding importance that formal political activity gained no legitimacy as it hurt their separatist campaign.

With the amendments made in October, the 73rd Amendment to the Constitution, which provides the architecture of panchayati raj at all three levels, will become functional for the first time in J&K. Predictably enough, this has not gone down well with the separatist constituency and its sympathisers in the state and elsewhere. Any empowerment at the village and sub-district level detracts from state-level politics when it is viewed in a zero-sum game fashion. While village and local-level devolution of politics, financial and other resources has been uneven except in the most soundly run states in India, there is now a chance that anyone and everyone can compete at this level and fulfil local aspirations denied since Independence.

It is fortuitous that there are no Assembly elections in the near future and this will allow local-level politics to take root without being short-circuited from Srinagar. To expect that Kashmir’s manifold problems will be solved with a single set of local elections is quixotic. But a right step has been taken to empower local politicians who have risked two very powerful adversaries in carrying out their activities. Seen from this perspective, it is important that the Union Government not rush to hold Assembly elections, whatever the critics may say about Kashmir being ‘de-politicised’. It is equally important that resources flow from the state government to these local institutions so that people can see that their choices are not illusory.

The creation of PAGD has been seen as only the second instance when all shades of Kashmir’s political opinion came together to challenge a threat to identity. That is one way of looking at the situation. The other way is that it is high time Kashmir and India moved away from the politics of autonomy that has only led to separatism and bloodshed. The oligarchy in the state thrived in this ‘grey zone’ between integration with India and keeping insurgency alive. The first of a long series of steps away from that direction may be taken from this November.