Rising From the Ruins 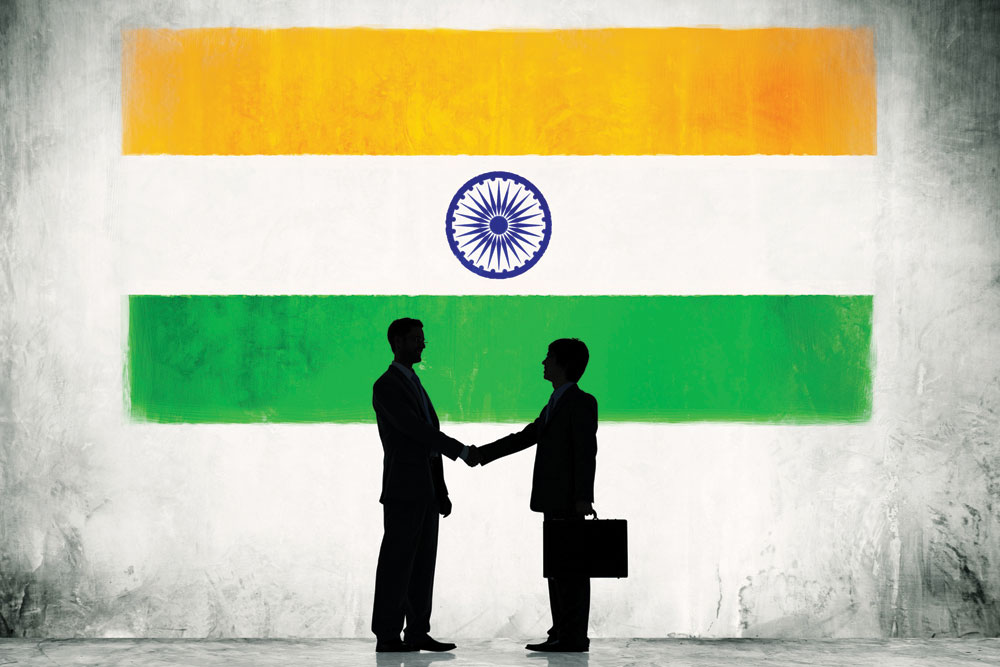 Covid-19 has materially altered the investment outlook and climate for new investments across regions. The impact has been felt across all heads of investments, namely, foreign direct investment (FDI), portfolio investments and domestic financed investment, both greenfield and brownfield.

The Covid crisis caused a dramatic fall in FDI in 2020. Global FDI flows dropped by 35 per cent to $1 trillion, from $1.5 trillion in 2019. This is almost 20 per cent below the 2009 trough after the global financial crisis. The decline was heavily skewed towards developed economies, where FDI fell by 58 per cent, in part due to oscillations caused by corporate transactions and intrafirm financial flows. FDI in developing economies decreased by a more moderate 8 per cent, mainly because of resilient flows in Asia.

FDI patterns contrasted sharply with those in new project activity, where developing countries are bearing the brunt of the investment downturn. In developing countries, the number of newly announced greenfield projects fell by 42 per cent and the number of international project finance deals—important for infrastructure—by 14 per cent. This compares to a 19 per cent decline in greenfield investment and an 8 per cent increase in international project finance in developed economies.

All components of FDI were down. The overall contraction in new project activity, combined with a slowdown in cross-border mergers and acquisitions (M&As), led to a decline in equity investment flows by more than 50 per cent.

The impact of the pandemic on global FDI was concentrated in the first half of 2020. In the second half, cross-border M&As and international project finance deals largely recovered. But greenfield investment—more important for developing countries—continued its negative trend throughout 2020 and into the first quarter of 2021.
Among developed countries, FDI flows to Europe fell by 80 per cent. FDI flows to Africa fell by 16 per cent to $40 billion—a level last seen 15 years ago. FDI in Latin America and the Caribbean plummeted, falling by 45 per cent to $88 billion.

Flows to developing Asia, the focus region of today, were resilient. Inflows to China increased, by 6 per cent, to $149 billion. Southeast Asia saw a 25 per cent decline, with its reliance on GVC-intensive FDI an important factor. FDI flows to India increased, driven in part by M&A activity.

The outlook from the point of view of international investment flow has improved. Global FDI flows were expected to bottom out in 2021 and recovered some lost ground, with an increase of about 10 to 15 per cent. This would still leave FDI some 25 per cent below the 2019 level. Latest forecasts show a further increase in 2022 which, at the upper bound of projections, would bring FDI back to the 2019 level.

Nevertheless, prospects are highly uncertain and will depend on, among other factors, the pace of economic recovery and the possibility of pandemic relapses, the potential impact on FDI of recovery spending packages, and policy pressures.

On the domestic investments side, the recent GDP figures of India for Q2 show that gross capital formation has grown by 24.4 per cent, although the pre-Covid levels are yet to be touched.

The impact of Covid was clearly visible. The fresh sanction of projects in the first half (H1) of 2020-21 dwindled to 68 projects, a record low compared to 137 projects sanctioned during H1:2019-20, clearly indicating the role of the pandemic. The majority of banks/financial institutions (FIs) reported ‘Nil’ projects during H1:2020-21, which points to a very subdued investment climate of the private corporate sector owing to pandemic-induced uncertainties. The second half of 2020-21 showed some signs of recovery in terms of number of projects, which got financial assistance from banks/FIs, though the investment climate remained subdued in terms of total cost of projects sanctioned by these entities.

As many as 144 Central infrastructure projects have reported delays (single and multiple) in their completion in the current financial year and the total cost overrun of these is ₹ 14,960.02 crore. The steps also include setting up of revised cost committees in the ministries for fixation of responsibility for time and cost overruns; regular review of infrastructure projects by the concerned administrative ministries; and setting up of Central sector projects coordination committees in the states under the chief secretaries for the removal of bottlenecks.

The Reserve Bank of India (RBI) infrastructure outlook survey informs that infrastructure companies also gauged a positive turnaround in their turnover as well as overall business situation from the contraction in the aftermath of the pandemic’s second wave. Respondents assessed recovery in both full-time and part-time employment.

With almost flat new announcements of around ₹ 11 trillion reported in FY21 as compared to ₹ 10.8 trillion in FY20, FY22 looks optimistic with around ₹ 5.6 lakh crore investment announcements made so far in the last five months in FY22 (April-August), as per Projects Today. What is pertinent to mention is that around 70 per cent of this, that is, ₹ 3.84 lakh crore, is coming from the private sector and around 30 per cent is from the Government. 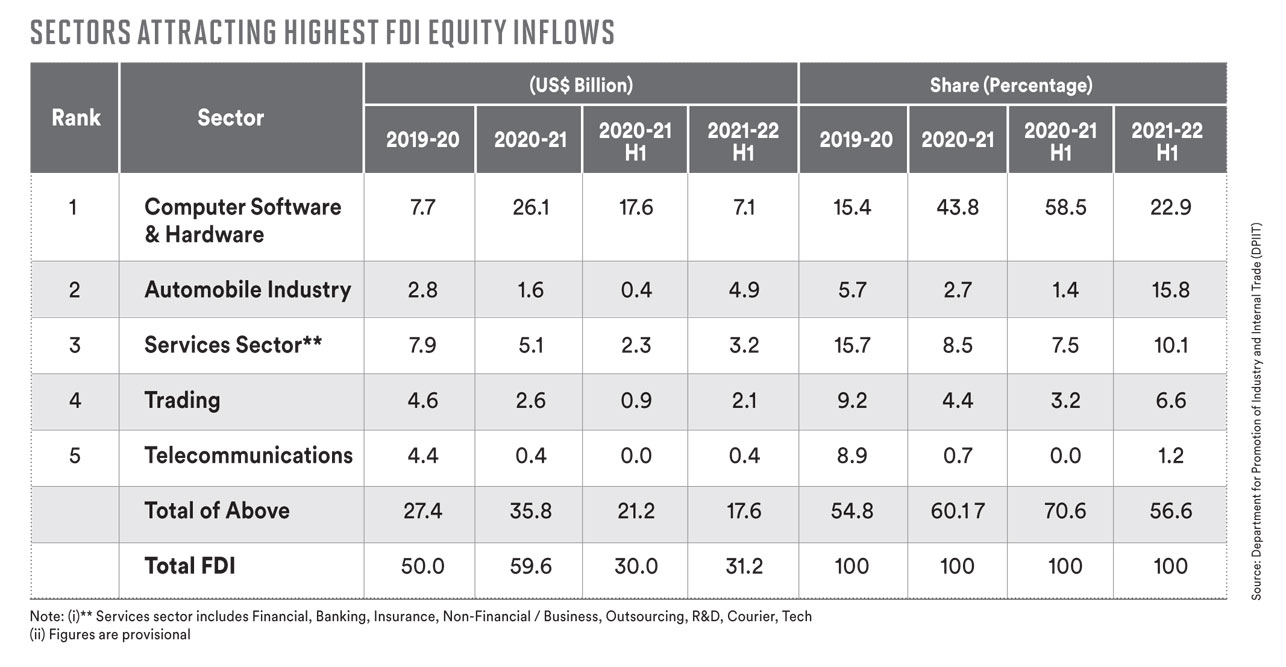 On the FDI side, as already mentioned, India received record FDI in FY21. Notwithstanding the global slowdown and the pandemic, total FDI into India rose to a record $81.72 billion in 2020-21. During April-July this fiscal, FDI to the country increased by 62 per cent to $27.37 billion. The key sectors which attracted the most FDI include the services segment, computer software and hardware, telecommunications, trading, construction development, automobile, chemicals, and pharmaceuticals.

FDI flows to India increased, driven in part by M&A activity, amid the struggle to contain the Covid outbreak. Robust investment through acquisitions in ICT (software and hardware) and construction bolstered FDI. Cross-border M&As surged 83 per cent to $27 billion, with major deals involving ICT, health, infrastructure, and energy.

Large transactions included the acquisition of Jio Platforms by Jaadhu (a subsidiary of Facebook (US) for $5.7 billion, the acquisition of Tower Infrastructure Trust by Brookfield (Canada) and GIC (Singapore) for $3.7 billion, and the sale of the electrical and automation division of Larsen & Toubro India for $2.1 billion.

Domestic investments and, in particular, private investment demand have seen some traction in H1 and the momentum will carry into the coming months

India will continue to attract foreign investment in high-tech industries, given their market size and their advanced digital and technology ecosystem. Further steps like the rolling out of the PM Gati Shakti National Master Plan (NMP), single-window clearance and GIS (Geographic Information System) mapped land bank would help in attracting further investments.

FDI to India has been on a long-term growth trend and its market size will continue to attract market-seeking investments. In addition, investment into the ICT industry is expected to keep growing. The Production Linked Incentive (PLI) scheme designed to attract manufacturing and export-oriented investments in priority industries (for example, automotive and electronics) will drive a rebound of investment in manufacturing.

To summarise, the outlook on investments is improving, but there will be regional variations and dynamics affecting overall recovery. In Asia, the investment outlook is a bit more positive than in the US and Europe.

In India, the investment outlook after the Covid-19 shock is improving. Domestic investments and, in particular, private investment demand have seen some traction in H1 and the momentum will carry into the coming months. A part of private demand will be positively impacted by deferred pipeline investment from 2021-22 to 2022-23, increasing the overall thrust on private investment.

However, financing remains an important aspect of investment. With the possible rise in the federal funds rate, we may see some impact but overall demand may still dominate. Banks and capital markets will be key to taking the investments to their conclusion. The National Bank for Financing Infrastructure and Development (NaBFID) will begin business by approving the first loan for the project in the first quarter of the new financial year (2022-23), beginning in April 2022.