Examining the big issues of our time, from climate change to mortality to the origins of the universe 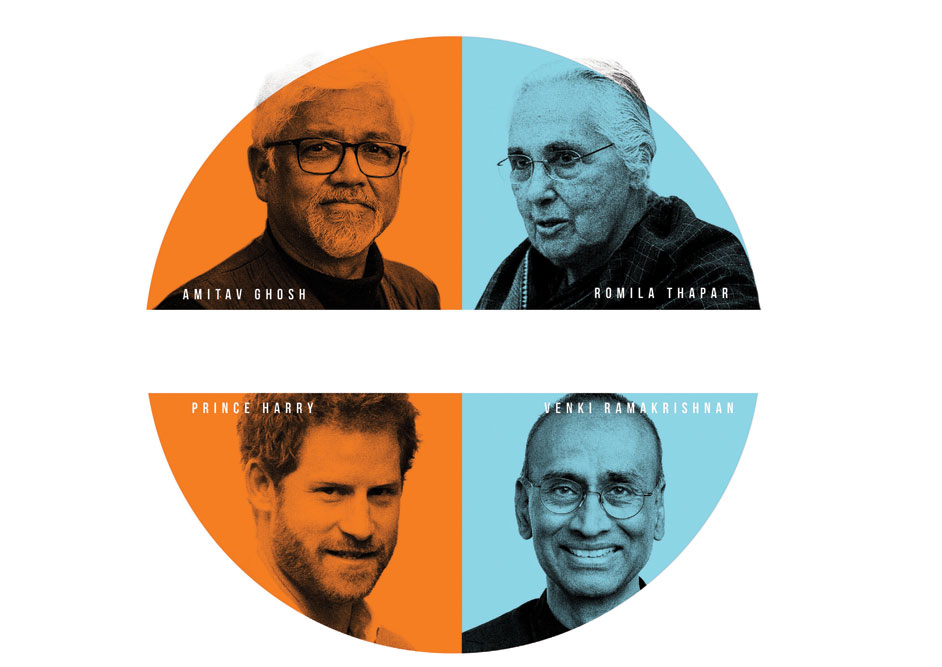 
Smoke and Ashes: A Writer’s Journey Through Hidden Histories by Amitav Ghosh | HarperCollins

A wide-ranging book about China and India; tea and opium; Europe and Asia; capitalist enterprises and indigenous understandings of the environment.

Made in India by Amitabh Kant | Rupa

A survey of the country’s business heritage and culture. Amitabh Kant provides ways to shape and execute a growth strategy.

Revolutionaries: The Other Story of How India Won Its Freedom by Sanjeev Sanyal | HarperCollins

An examination of India’s free•dom struggle from the revolu•tionary perspective, and why the British were forced to leave. The book interweaves drama, assassination, and treachery with the personal courage of the revolutionaries.

Paul Auster traces centuries of America’s use and abuse of guns. Since 1968, more than one and a half million Americans have been killed by guns. This beggars the question— why is America so different? Why is the US the most violent country in the Western world? Interwoven with Spencer Ostrander’s photo­graphs of the sites of more than 30 mass shootings, Bloodbath Nation asks: What kind of society do we want to live in?

It was a searing image—two young boys, two princes, walking behind their mother’s coffin. As Diana, Princess of Wales, was laid to rest, billions wondered what the princ­es must be going through. We now have that story.

Why We Die by Venki Ramakrishnan | Hachette

Nobel Prize-winning chemist Venki Ramakrishnan investigates the ongoing research to extend our lifespans indefinitely and explores the cultural, social and ethical rami­fications of that research. As science advances, how much are we going to win and how much might we lose?

A reframing of the debate on pover­ty, making a new argument about why it persists in America. Matthew Desmond draws on history, research, and reporting to show how affluent Americans knowingly and unknow­ingly keep poor people poor.

Greta Thunberg gathers the wis­dom of over one hundred experts— geophysicists and meteorologists; engineers and mathematicians; historians and indigenous lead­ers—to propose ways to combat cli­mate disaster. Alongside them, she shares her own stories of uncover­ing greenwashing, revealing how much we have been kept in the dark. She reminds us of the audac­ity of hope. If a schoolchild’s strike could ignite a global protest, what could we do collectively if we tried?

On the Origin of Time by Thomas Hertog | Bantam

In the theoretical physics depart­ment at Cambridge University, Stephen Hawking and his friend and collaborator Thomas Hertog worked for 20 years, to develop a new theo­ry of the cosmos that could account for the emergence of life. Hawking’s closest collaborator now offers a revi­sion of the theory he put forward in A Brief History of Time.

Enchantment: Awakening Wonder in an Anxious Age by Katherine May | Riverhead Books

An invitation to reawaken our innate sense of wonder and awe. Katherine May shares stories of her own strug­gles professionally and personally and explores the restorative proper­ties of the natural world, through the elements of earth, water, fire and air.

The Patriarchs: How Men Came to Rule | by Angela Saini | HarperCollins

Angela Saini searches for the true roots of what we call patriarchy, un­covering a complex history of how it first became embedded in soci­eties and spread across the globe from prehistory into the present.

The former Kerala Health Minister tells the story of her life and through her life, tells a larger story about Kerala.

A New History of India: From Its origins to the 21st Century by Rudrangshu Mukherjee, Shobita Punja and Toby Sinclair | Aleph

Why did Ancient India’s Matriarchy Disappear? Reflections on our Past, Present, and Future by Romila Thapar | Aleph

Romila Thapar probes a wide varie­ty of subjects—ancient India’s matriarchal systems, the myth of a national language, the figure of the public intellectual, as well as the historicity of Ramayana and Mahabharata. These essays offer in­sights into our history, language, culture, and religion.

A journey through the lives of two Nobel Prize winners, and how we can apply compassion to our every­day lives.

A window to the life and times of Tipu Sultan.

The Indian Cat Files: The Cat in Indian Literature by BN Goswamy |Aleph

Art historian BN Goswamy writes about the figure of the cat and its rep­resentation in Indian art and folk­lore— from the poems of Ghalib to folktales and even fables from the Mahabharata and the Panchatantra. He highlights a variety of paintings in which cats make their appear­ance—Mughal, Rajasthani, Pahari, Company—while also speculating what the cats might themselves be wondering through captions.

When Thomas Roe arrived in India in 1616 as James I’s first ambassador to the Mughal Empire, the English barely had a toehold in the subcon­tinent. Courting India reveals Roe’s time in the Mughal Empire to be a turning point in history. Along with Roe’s account, readers also get an insider’s view of Britain in the mak­ing, a country whose imperial seeds were just being sown.

Insatiable: My Hunger for Life by Shobhaa Dé | HarperCollins

Water in a Broken Pot: A Memoir by Yogesh Maitreya | Penguin

Yogesh Maitreya is an independent Dalit publisher, writer, and poet. Maitreya writes of working day and night shifts in factories; and univer­sity systems which continue to be casteist. A memoir of struggle and resilience.

A mapmaker, working in 1846, depicted important buildings, streets, and landmarks, providing a wealth of information about the city. Shahjahanabad reproduces this large scale, beautifully drawn and colour­ed map, and considers the city as it had stood prior to its mid-19th century changes. It also explores its diverse communities and important landmarks.

Banned & Censored: What the British Raj didn’t Want You to Read: Selected and Introduced by Devika Sethi | Roli Books

A dive into the history of sedition and censorship in colonial India. It examines over 75 texts that the co­lonial state banned, censored or deemed seditious. These lost gems from the Indian freedom movement include writings by figures famous and obscure, of events immortalised and forgotten.

A Lucky Man: The Memoirs of a Radio-wala by Mark Tully | Speaking Tiger

Over 60 years, Mark Tully became the voice of the BBC in South Asia. In his memoir, he writes of his encounters with the most intriguing newsmakers of the subcontinent: from Indira Gandhi to Narasimha Rao to LK Advani to Mujibur Rahman.

A history of chain-stitch embroi­dery in India and its connections to the Mochi or shoe-maker communi­ty. This work focusses on embroider­ies from the 18th to 20th centuries in the TAPI collection of textiles, with many pieces having direct links both to Gujarati royal families and the lineage of Mochi craftswomen.