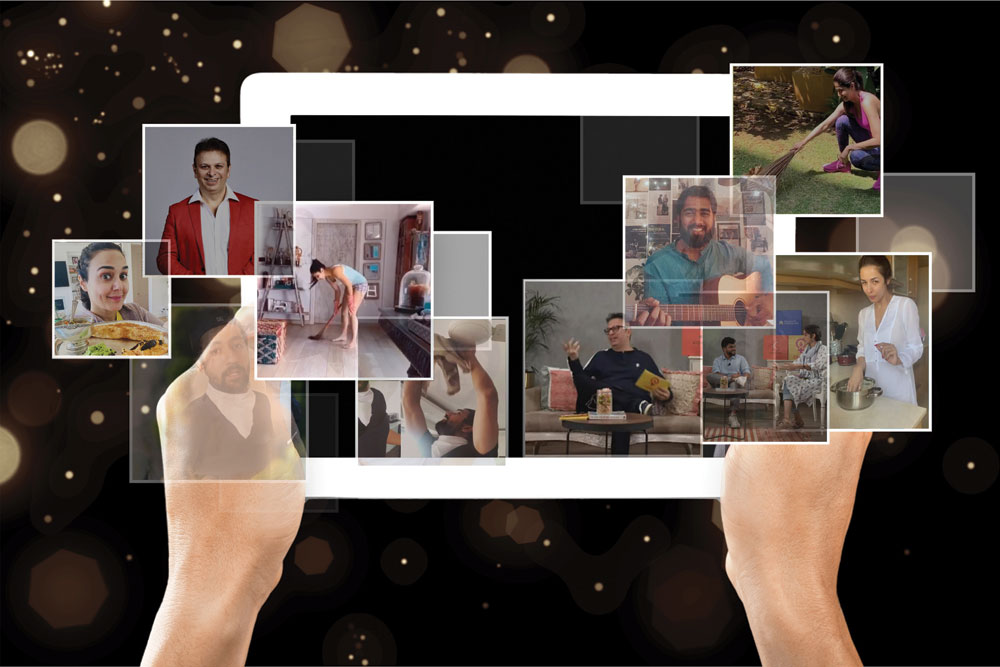 LAST MONTH, AS the coronavirus pandemic brought shutters down on all forms of large planned gatherings from concert auditoriums to festival grounds, the shutdown also arrived at a remote Texas ranch owned by country music legend Willie Nelson. Nelson hosts what he calls an “anti-festival” every year around this time at his Luck ranch. Unlike other large concert festivals, this is a relatively small and intimate affair, some of the biggest and upcoming country musicians performing to a crowd that never numbers more than a few thousand.

Like all other concerts, it appeared that this year’s Luck Reunion was going to be cancelled too. But then the organisers decided to do something different. They took it online. Calling this year’s iteration ’Till Further Notice, with a host seated at a nearby studio (in Austin, Texas), the original line-up of musicians called in their performances (most of it, live) from their living rooms and basements, in-house studios and outdoor settings. And the entire concert, all of five hours, was livestreamed. This strange and unusual concert where there was no audience or even a stage, took place on March 19th. It was streamed for free, with a virtual tip jar for those who wanted to contribute (many clips from the festival are still available on its website).

The Rolling Stones called this year’s iteration Luck Reunion’s ‘most emotional year’. It had an air of informality and intimacy that no concert could provide. Husbands and wives, fathers and daughters jammed with each other in spare settings. At one point, when the singer Jeremy Ivey cracked a joke, his wife Margo Price rolled her eyes and said, “He hasn’t even had any weed.”

At the end, as is the tradition, appeared the frail figure of Nelson, now almost 87, dressed in a black tee and red bandana, along with his two musician sons, Lukas and Mikah. The three sat on a couch in what was probably their living room, each with his own guitar. It wasn’t just the songs they sang but the endearing vibe of this domestic setup that elevated this concert. Here was an old man jamming with his two young sons, and every once in a while, he would say something to the two, as though
they were sharing a personal conversation.

These weren’t the only strange visuals of performances held during this pandemic and lockdown. Across the world, artists attempted to create an artistic response to the despondency. They livestreamed performances conducted at empty auditoriums or homes, from the Berlin Philharmonic’s concert in an eerily empty auditorium or the National Orchestra of France’s YouTube performances, where individual pieces sent in by musicians from home were then stitched into a single collective piece, to Chris Martin and John Legend crooning at the piano from their homes.

At its heart, every performing art is a social medium. It needs an audience to exist. This pandemic has taken it away. All venues, be it a movie theatre or a concert hall, are shut. We don’t know for sure when these will reopen; and when they do, if people will venture out as carefree as they once did to catch something as unessential as a performance. In the West, those in the higher echelons of the performance industry, the movie and music celebrity, have tried to make sense of their now isolated lives by putting up social media videos.


It is possible that in a lockdown, the celebrity feels like a commoner. And their online performances are meant to transmit that feeling

These are performances of their own kind. But when they move about in vast palatial mansions telling viewers how ‘crazy’ isolation is making them, or like Gal Gadot posting an excruciating video where celebrities smugly sing a line from John Lennon’s ‘Imagine’, they come across as tone-deaf and even mocking performances. Among them, the most bizarre was probably the sight of a nude Madonna in a milky bath sprinkled with rose petals telling her Instagram viewers that the virus is ‘the great equaliser’. ‘What’s terrible about it is,’ she says in the video, ‘is what’s great about it.’

In India, half-way into the lockdown, the Indian movie celebrity seems to be caught in somewhat the same dilemma. How do they respond artistically? Now that their public service announcements on the need to stay home and hand-washing manuals are done with and viewers’ fatigue has set in with their workout videos, how do they keep cultivating their audiences? Isolated in their homes and divorced from the film set, the Indian movie celebrity is now picking up the hitherto unexplored items of their houses. Katrina Kaif has picked up a broom; at other times, she is elbow-deep in her kitchen sink doing the dishes. Her rumoured paramour Vicky Kaushal is cleaning his ceiling fans; Shilpa Shetty is sweeping her garden, Esha Deol watering her plants, Malaika Arora cooking paniyaram, and Preity Zinta preparing a dosa. Away from the movie set, they have now elevated common housekeeping chores into a performance. The producer and TV chatshow host Karan Johar now maintains a video diary hashtagged lockdownwiththe johars on Instagram, where he conducts short interviews of his toddlers rummaging through his Gucci and Versace jackets in his vast walk-in-closet. It is possible that in a lockdown such as this, the celebrity feels like a commoner. And these online performances are meant to transmit that feeling. But for the vast majority, through these videos, the celebrity couldn’t have been more distant.

It is outside Bollywood, in the other strata of the performance industry where the hit from the pandemic and the lockdown is far more severe. Quoting from a report put out by the Event and Entertainment Management Association, Roshan Abbas, the actor and former RJ who runs a performance artists’ collective in Mumbai called Kommune that organises a variety of shows from music and theatre performances to poetry slams and spoken word events, estimates that the live events industry has already lost around Rs 3,000 crore from cancelled shows and events. This is going to be a lot more as the year progresses, he says. “Places and venues are going to shut down. People are going to lose their livelihoods. The artist who does gigs, I doubt they even have money saved to last them a month,” he says. “The thing is everybody keeps saying art will save humanity. But in this case, saving humanity (by keeping them in lockdown) is going to kill the arts.” 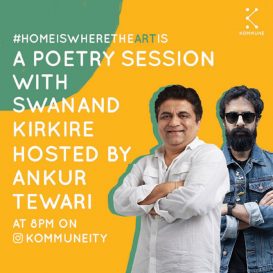 THE ANXIETY ISN’T just about the immediate period. But about how memories of this pandemic will shape human behaviour in the near future. “Will people feel stress-free to go watch a gig now once all this is over? I don’t know,” Abbas says. “The only thing we can do is to come up with newer ideas of how we can reach people with our shows.”

With the country in lockdown, with a palpable fear that things will not return to normal in the near future, many are now coming up with new ideas on how performances can be staged. If people cannot come out to watch a performance, surely the artist can come to them through their mobile phones.

Several event-based organisations, from booking platforms such as BookMyShow and festival organisers like NH7 Weekender to groups such as Kommune, have now begun to experiment with digital concerts (of performances ranging from music and standup comedy acts to poetry slams and storytelling events) that are livestreamed.

Omkar Potdar, an indie musician who goes by the stage name of Omi, has participated in some of these concerts. “It’s a bit strange to be performing in front of a phone or a laptop and it takes a bit of getting used to,” he says. “But with time you figure it out, like where you sit (in the house), how you present yourself, to not taking things casually and always having your instruments and your set ready.”

Potdar had to cancel the launch and screening of a music video for his EP (extended play record which contains several tracks) he had planned last month. He had been working on the EP for over three years and spent months organising the launch event. “Everything was ready, all those who had contributed to the album were coming. And right up to a few days before the event, we had hoped to have it with face masks and hand sanitisers for attendees. But then we had to cancel it just days before (the event),” he says. “It was a terrible feeling.”

Roshan Abbas, who runs a performance artists’ collective in Mumbai called Kommune, estimates that the live events industry has already lost around Rs 3,000 crore from cancelled shows and events

Potdar, for now, has moved his performances online. Apart from the digital concerts he participates in, he also has a daily Instagram project going on. Here, he writes and performs a song for every single day of the lockdown period based on the prompts he receives from people. “It’s a way of keeping creatively engaged. And people seem to be liking it,” he says.

Groups like Kommune haven’t let the lockdown dampen their spirits either. A number of new online shows are lined up, Abbas says. One of them is a play slated to be performed in a week’s time. But how can a play be performed online? Is it single actor performing a monologue? “Oh no. There are so many options,” Abbas says. “You can have many actors participating from their homes, seated on a similar table (that can then pass off as single table across the frames). Or you can have a courtroom drama (with different actors simulating such a space by sitting in spots that can resemble a courtroom space, such as witness boxes). Or, maybe, an interrogation scene. All you need is a low-angle camera shot (that simulates the perspective of a suspect looking up at an interrogator) and a high-angle shot (that mimics the point-of-view of an interrogator bearing upon his suspect). I would say desperation is the mother of all invention.”

At this point, he excuses himself. There is a rehearsal over a Zoom video call waiting for him.