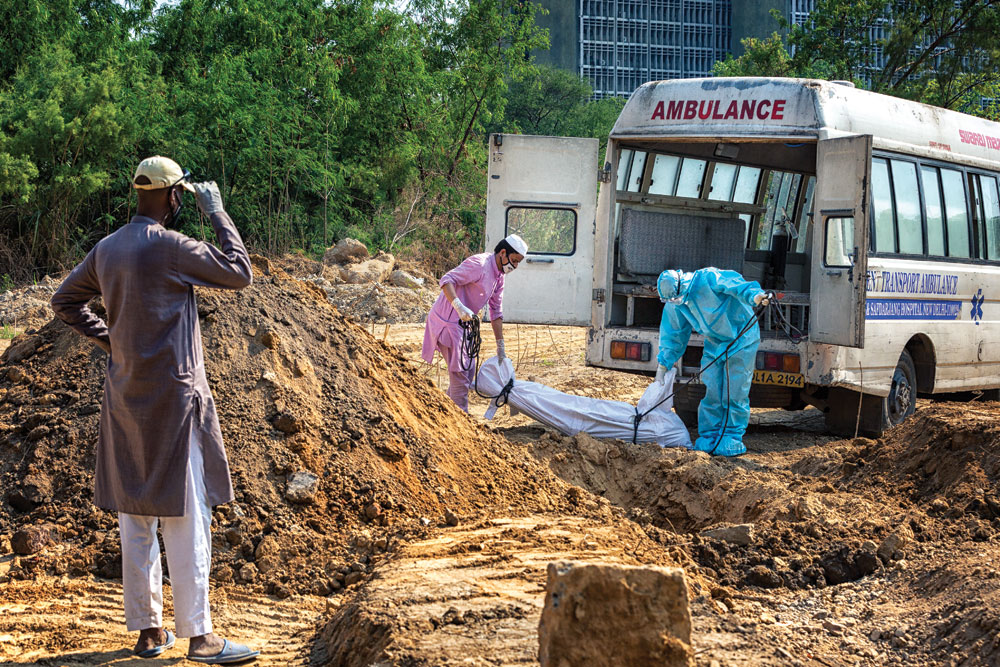 Mohammad Shamim (left, foreground) instructs his family members on where to place a body before burial at the Jadeed Qabristan in Delhi, April 27 (Photos: Ashish Sharma)


At Nigambodh Ghat, Delhi’s oldest crematorium, a man in his late 30s, garbed in protective gear, is overseeing some unusual farewells. The bodies come sealed in bags. There are no solemn spectacles or rituals. The families don’t uncoil in grief as sympathisers stand by. The face of death is shrouded entirely in plastic, cold, unfamiliar, certainly not a mirror of the life led. Mohanlal switches on the incinerator and switches off his emotions. “We do what we can to protect ourselves, especially emotionally,” he says. In his decade-and-a-half of service at the Ghat, he has seen nothing like this. Crematorium No 3 has been earmarked for Covid-19 positive patients who failed to fight off the disease. They are coughed out of ambulance vans and wheeled in on a crude push-cart through a side gate. With congregations banned during the lockdown, no more than 20 people are allowed to be present at funerals. When someone dies of Covid-19, however, not even that many are brave enough to confront the disease and what it is capable of. Funerals at the crematorium are attended by just four or five members of the family, Mohanlal says. “Families don’t even get to see the faces of their loved ones. Some will video call their relatives, but mostly, even in the midst of grief, there is terror. Everyone wants to maintain distance,” says Mohanlal. After every funeral, he straps on a government issue sanitiser tank and sprays the contents liberally, including on his colleagues at the crematorium. Though the World Health Organisation has clarified that cadavers are not infectious—except perhaps in case of death by haemorrhagic fever—fears persist, given that we know very little about Covid-19.


If doctors, nurses, policemen, cleaners and other frontline workers have enabled humanity to put up a resolute fight against the virus, there are those who have stood on the other side, helping families bid goodbye to loved ones when everything is over. When Mohammad Shamim got the first call about burying a patient who had succumbed to Covid-19, he flatly refused. A third-generation grave digger, he lives with his wife, four children, father and siblings on the Jadeed Qabristan grounds in Delhi. The risk of catching the infection weighed on his mind. “But we have a sense of duty. If we won’t do it, then who will?” says Shamim, 38. After the Delhi Waqf Board designated the graveyard for Covid burials on April 10th, he sat down with a doctor to understand the risks associated with handling the mortal remains of a Covid victim, and the precautions he needed to take. A plot size roughly measuring an acre was cleared up and a JCB excavator brought in. “We have been told that the body has to be buried at least 10 feet deep, instead of the usual three. There are no rituals allowed. The body comes here straight from the hospital in a bag.”

Shamim’s phone does not stop ringing throughout our conversation. There are already 30 odd bodies buried in the ‘Covid plot’ measuring roughly an acre. Shamil worries whether they will run out of space. It is only noon on April 27th and he has already supervised three burials. Two more bodies are on their way. “You can offer prayers at home. Prepare to leave now,” he tells a family. There is another that needs his attention. Ahmed Zia and two others are here to bury his 75-year-old mother Manazara Khatun. She had gone to the hospital with low sodium and potassium levels—a routine affair for her. When the hospital learned she was from a hotspot—Batla House—she was admitted to a Covid ward and eventually succumbed to the infection. Zia will never know if she caught the infection at the hospital or before. He struggles to put on the Personal Protective Equipment (PPE) kit before his mother’s body is ejected from the hearse and eventually lowered into the pit with the help of ropes. “There have been a few unfortunate mishaps. Sometimes, only one or two family members turn up and there aren’t enough people to lower the heavy cadaver into the ground.” Shamim tries to keep his distance. He doesn’t have a PPE kit and both his mask and his gloves are personal investments. Earning Rs 100 per burial, he can scarcely afford to physically get involved. “I try and help out as much as I can but in the absence of proper protective gear, I have no choice but to maintain a distance.” Shamim hasn’t been tested for Covid-19, and in fact, hasn’t even left the burial grounds since he does not have a pass to get around town.

The WHO’s list of instructions for handling bodies of Covid-positive patients includes taking “standard precautions including hand hygiene” and using “appropriate PPE”. These are extraordinary times, says Sarjeet, an ambulance driver who has worked at a government hospital in Delhi for over a decade. He sits in the designated drivers’ room, PPE kit prepared, waiting for a call. “Before all of this, I would transport six to seven bodies in a day to crematoriums and burial grounds around the city. It is a job where you can keep your sanity only by detaching yourself from what is around you. But the Covid deaths have really shaken us all to the core. The way last rites are being conducted, with no rituals, not enough people around to mourn, that stays with me.” Keeping Sarjeet company in the waiting room is a hospital attendant who will peel off his PPE and set fire to it after he returns from dropping off a body, as part of a strict sanitation drill.

When Mohammad Shamim got the first call about burying a patient who had succumbed to Covid-19, he flatly refused. A third-generation grave digger, he lives with his wife, four children, father and siblings on the Jadeed Qabristan grounds in Delhi

The last time Ahmed Zia saw his mother was on March 20th when he took her to hospital. “She was in the ward and while the hospital staff was helpful, and yet, I had to say goodbye to her without even looking at her one more time. She will understand. All we can do is go home and mourn her,” says Zia. Without a proper ceremony to mark it, the departure of a loved one becomes a mere removal, sans emotional closure. Non-Covid funerals, too, have become diminished affairs. At the Lodhi crematorium as well as at Nigambodh Ghat, urns filled with ashes are piling up. “We used to have a token system till 72, and never felt the need to go beyond it. Today, we are at 265,” says Pandit Dharamveer, in-charge of the asthi-grah at Lodhi crematorium. No Covid funerals take place here because they have only one electric crematorium—burning by pyre is forbidden for Covid bodies. “People who could not make it to their own parents’ funerals due to the lockdown have requested us to keep the urns until they can collect them,” says the priest, glancing through a register containing the details of the urns. Entries for the ones that have been collected are crossed out, with phone numbers of the family written in bold letters in case of a follow-up. With travel to Haridwar, a preferred destination for immersion of ashes, out of the question, crematoriums have been advising people to do immersions in the Yamuna.

Relative to the massive toll Covid-19 has taken in countries like Italy and America, the low death rate in India—at a little over a thousand—continues to remain both good news as well as a mystery answerable neither by allegations of fewer testing nor by unreported deaths. According to government statistics, Covid has claimed 54 lives in Delhi, though enquiries at both the burial ground and the ghat reveal the numbers could be higher. “There is a lot of stigma attached to death by Covid. I have had calls from family members asking for the departed to be buried in a proper graveyard, but my hands are tied,” says Shamim. Glancing at the two women waiting for him in the office, he worries that they won’t be able to lower the body into the pit. Sher Singh, one of the two JCB drivers, says he could help, but with no protective gear, save a mask and a bottle of sanitiser, it is not an option. It is the hospital staff accompanying the body who help the women out.

Without a proper ceremony to mark it, the departure of a loved one becomes a mere removal, sans emotional closure. At the Lodhi crematorium as well as at Nigambodh Ghat, urns filled with ashes are piling up

With infection rates in India slowing over the past week, there is hope that there will be fewer funerals to conduct. Having buried eight on April 27th, Shamim is delighted there are none the following day. “It could be slowing down, it could be pausing for breath. We can’t know. Working closely with death teaches you the value of patience,” he says.