‘India Could Use a Firm that Focuses on Social Sector Data’ 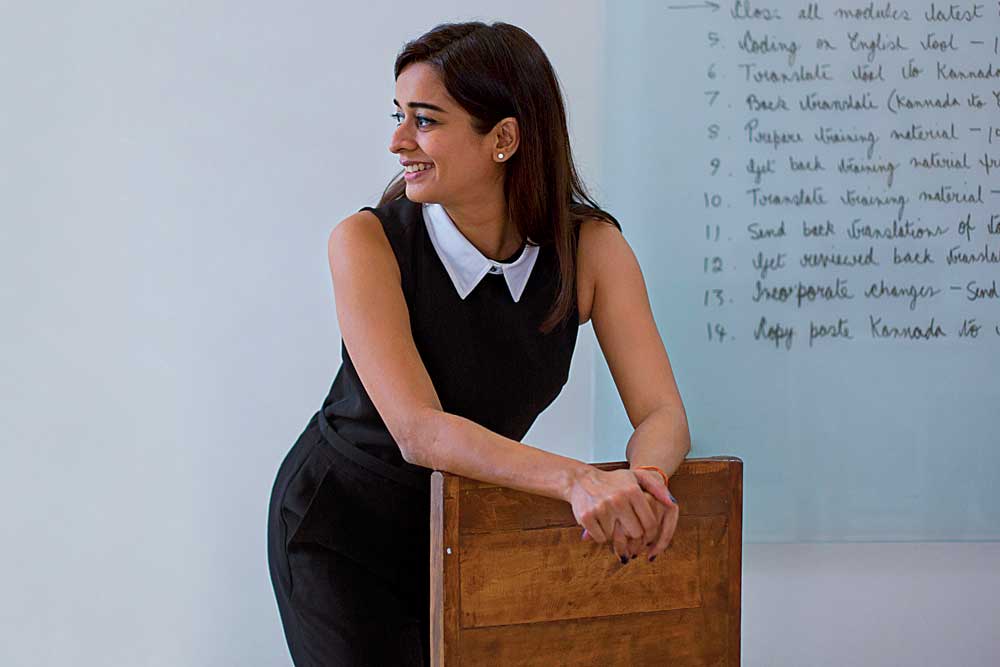 When Prerna Mukharya, a 32-year-old entrepreneur, suggested we meet at a popular coffee chain outlet on a Saturday afternoon, it seemed typical of a generation which grew up in the coffee- shop boom. It turned out to be the ideal setting for her to explain the turn her life took six years ago. Her tryst with data began at a Costa Coffee outlet near her house.

On her 26th birthday, Mukharya woke up late. It was like any other hot April morning. But that day she decided to make a leap of faith. She logged on to a domain-selling site and zeroed in on ‘Outline India’. For the next six months, she operated from that coffee shop, with no full time staff, Rs 2 lakh in her account, and zero experience of running a business. Since then, along with her team, she has visited 5,000 villages across 25 states to collect social-impact data for nearly 200,000 surveys on everything from sanitation to gender issues for clients ranging from governments and policymakers to academics, NGOs and Ivy League universities.

“Every pen in this office is hard earned,” she says, back in her two-storey rented office tucked away in a quiet residential colony of Gurgaon. Large glass boards spell out her company’s tasks over the next few days. One of them sports a schedule for a study on the effectiveness of the Health Ministry’s Rashtriya Swasthya Bima Yojana in Karnataka. On a wall is a Buddhist Tankha painting with the Mandala, which symbolises the universe. “It’s for peace,” she says. There is also a wooden table, some chairs and a laptop.

Ever since Outline India began in September 2012, it’s been on a mission to improve decision-making through hard-to-obtain data. Its teams have travelled millions of kilometres and evaluated over months and years the impact of various social measures. Working solely in the development sector, the research firm considers itself a catalyst for the work of think-tanks, policymakers, Corporate Social Responsibility executives, philanthropists and governments. It does this by capturing reality at the grassroots and turning in into bits and bytes for them. And all this as a bootstrapped, profitable, single-founder- driven social enterprise. Mukharya says she loves the “madness” of it.

“Even today, policy and social circles are about white hair, jholas and academics. I don’t have a PhD. As a 26-year-old, people didn’t trust me,” she quips. Dressed in black trousers and a formal top, her corporate image is reflective of her avant-garde mission. But in the hinterland, she changes into a salwar-kameez and sneakers. Mukharya makes it plain that this is not charity. “To change the world, it has to be incentive-driven,” she says. As for changing the world, she hopes to do “just a little bit” by being “the ears and eyes on the ground” to collate what she calls “the single-most important element of policymaking and social research”: data. To her, each Excel sheet is a story in itself: each data point represents a need, someone’s life, and it is through field missions and data collection that those living in far-flung areas, away from the spotlight of national news, are heard.

Outline India now has a regular staff of 22, with an average age of 26, besides those hired locally for field work for specific projects. She recalls travelling in a crowded train to a village in Banda district, where she stayed in a wedding hall with a gun dealer’s shop below. It was her first big assignment. For weeks, she says, she went from toilet to toilet in public schools on a three-state exercise to assess if sanitation conditions had improved.

It was in 2011 while visiting places in rural India she had never been to before as a researcher at the Centre for Policy Research (CPR) in Delhi for a World Bank-funded study that the idea of social impact data first struck her. The question that kept coming to her mind was whether ground research was helping its intended beneficiaries. She realised while a lot of funds were going into projects, there was hardly any data on how the money was being used. “I saw a huge business opportunity and a case for impact in multiples. India, as well as other developing countries, could use a firm that focuses on development sector data. Most firms were doing everything under the sun from TRP ratings on cookery shows to market research on toothpaste to social research on why kids are not going to school. But the skills required are extremely different. Besides, you need researchers to go into the field. Crunching numbers is great, but ground experience is indispensable to research,” says Mukharya.

You need researchers to go into the field. Crunching numbers is great, but ground experience is indispensable, says Prerna Mukharya

Mukharya’s friends often compared her to Maddy Bowen, a tough and feisty journalist in war-torn Sierra Leone, played by Jennifer Connelly in Blood Diamond (2006). She had wanted to be a journalist. After graduating from Delhi University in economics, she worked as a writer for a short period. Soon after, she moved to Boston University to continue her education. After that, in 2009, she applied for a pool cleaner’s job at Disneyland but did not get it. It was one of many jobs that eluded her. Those were “tough times”, she recalls, referring to the Great Recession. She started working for two professors at Harvard and MIT. A year later, she applied to Bloomberg and CNBC again in an effort to join the media. But she eventually moved back to Delhi, joined CPR and acquainted herself with India’s vast social sector.

She snagged her first project in 2012 through Linkedin. Mukharya hired some interns, but with little experience of managing staff, she failed to retain them. The early days were a struggle. At one point, her mother noticed her looking downcast and reminded her it was a path she had chosen. Mukharya’s father, a manager in Andhra Bank, had a life of routine and discipline. “I come from humble means. The thought of doing business was scary. But my mother always said people who change the world don’t have tails and horns.”

So at a time when her friends were going abroad, working as corporate executives or getting married, Mukharya decided to double down on her business idea. Born and brought up in Delhi, she had always been aware that “good air, 24X7 electricity and women’s safety are luxuries one doesn’t enjoy in India”, but her work in rural India brought her face to face with another reality: the extent of the poor’s deprivation on such elementary measures as education and health.

Despite being sector-agnostic, Outline India has focused its efforts on health, education, water, gender, sanitation and agriculture. The team learnt on the job. In areas where concepts of time and space are lost in oblivion, getting answers to even simple questions like a respondent’s age was a battle at times. Its website mentions the case of an elderly woman in Bihar who told researchers that she was 17 years old.Over the years, Outline India developed its own tactics to get the answers right, or at least approximately so. For the age of children, it checks the Mother Child Protection card provided by the government, and if that is not available, it forms an estimate by asking if they were born before or after a well-recalled natural disaster. Adolescent girls are asked when they started menstruating. In the case of the old woman from Bihar, she was asked if she was alive when India won independence in 1947. She was.

Think of all the money coming into India for development. How do we track it? How do we know it’s creating the desired impact?, asks Prerna Mukharya

During a study in Alwar in Rajasthan on the impact of the Beti Bachao Beti Padhao programme, Mukharya came across women who claimed they treated their sons and daughters equally. That turned out to be mere lip service when they dug deeper. When beads were given to the women to distribute among their children, the sons got more. When questions were asked about the routine of their offspring, the gender bias became apparent. “They saw Madhuri Dixit on their television screens as a brand ambassador for Beti Bachao Beti Padhao. But mindsets had not really changed,” says Mukharya. The report brought out various complexities. According to Mukharya, while it was a relatively small dataset, it could change the way policy is formulated.

Kashika Chadda, a researcher with Outline India, narrates how during a recent survey on the link between dowry and education—to find out if parents invested in a son’s education to get more dowry—questions had to be asked without using the word ‘dowry’, which was replaced with ‘gifts’. Chadda’s team came across a man who was married thrice. “The man gave a different picture about the quantum of gifts compared to his third wife. We realised we needed to add a question to the survey and started first asking if it was the man’s first marriage,” says Chadda. Conducting a survey is an elaborate process: tools have to be picked for field use, training material prepared, enumerators coached question by question, a mock exercise done, data fed into computers, and a report made.

Outline India, now expanding to Nepal, has piles of micro- datasets spread across India. “No field mission resembles the previous one,” says Mukharya. While most surveys are made available only to clients, she gives glimpses of some. A study to explore the factors behind the success of sanitation policies in five states (Sikkim, Himachal Pradesh, Manipur, Meghalaya and Kerala), which had outperformed others as per the Swachh Bharat Mission portal in 2015, found, among other things, that women played a significant role in all five; they also involved community leaders, organisations and agencies to lead the sanitation drive.

Mukharya is excited about her soon-to- be-launched technology platform and application, Track Your Metrics (TYM), which has just won at an accelerator programme in Stanford, California. She claims it can automate surveys and bring down audit costs to near zero for funders. As of now, donors can conduct social audits using third-party evaluations. “Think of all the money coming into India for development. How do we track it? How do we know it’s creating the desired impact? Social audits using third- party evaluations are expensive and done perhaps once in a year. What about the other 11 months? What if someone is using the money to buy iPhones and not textbooks?” On the other hand, small NGOs lack research capacity and finding funds is a struggle. TYM can connect funders with these NGOs, making data collection cost-effective and bringing everyone to the same table, she says, adding that in a country with 3.1 million NGOs, twice the number of public schools and 250 times the number of healthcare institutions, there is nothing to reliably connect donors with organisations.

Where does Mukharya see Outline India five years from now? “Working closely with the Government, and Track Your Metrics being used across Africa and South Asia.”

“We are still very small,” she quickly adds, “We have a long way to go.”