In election season, it is usual to see populist spending but this time there’s a twist or two in the story 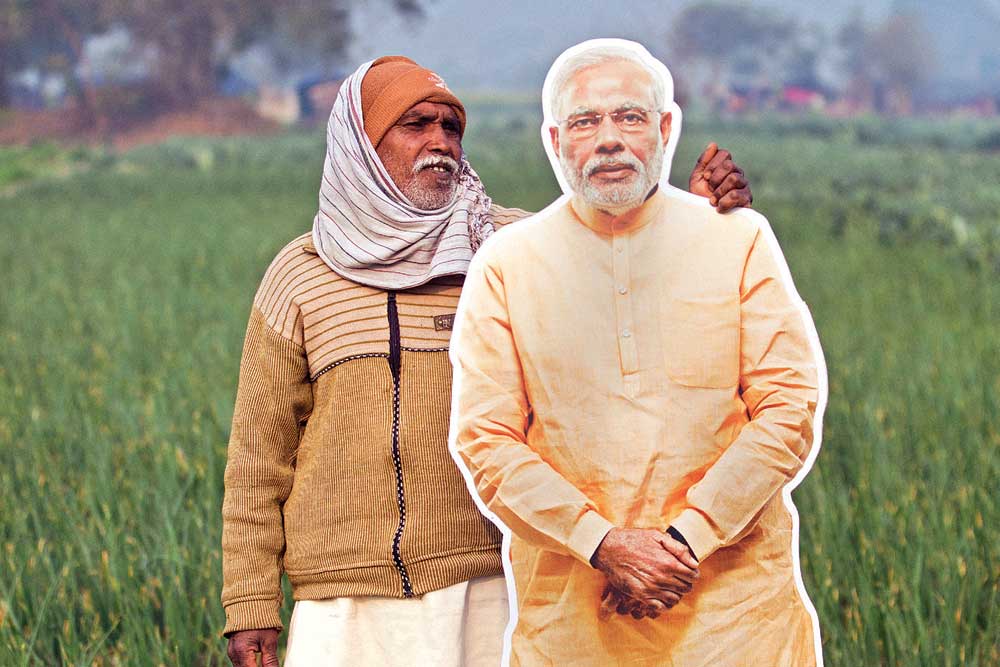 AT A FARMERS RALLY IN Raipur, Chhattisgarh, in late January, Congress President Rahul Gandhi set the cat among the pigeons when he said his party would give a guaranteed minimum income to the poor of India if voted to power. The occasion was symbolic: the rally was organised to mark the implementation of a loan- waiver scheme for farmers, a promise that was held as crucial for the victory of the party in that state. “It’s going to be historic. Congress has decided to provide a guaranteed minimum income to the poor in all states. The poor will get a minimum income directly in their bank accounts. This scheme will be the first of its kind in the world, as no other country has come up with such a decision so far,” said Gandhi.

Within days, on February 1st, the BJP-led Government in Delhi announced a response. In his Interim Budget speech, acting Finance Minister Piyush Goyal announced the Pradhan Mantri Kisan Samman Nidhi, an income support programme for farmers with cultivable landholdings up to two hectares. Under the plan, three instalments of Rs 2,000 each will be transferred to the bank accounts of those enrolled in the programme. Goyal said the exercise will entail an expenditure of Rs 75,000 crore per year.

The flurry of interest in such income schemes, in contrast with other rural spending programmes, is understandable. For one, the next General Election is around the corner and all parties are busy wooing voters. This makes sense as the number of people above 16 years of age in rural areas is twice that in urban areas if one goes by the 2011 Census. It is hard to draw a line between urban and rural constituencies in the Lok Sabha, but it is safe to say that rural seats are in excess of 320 or so. Also, in recent years rural areas have witnessed considerable distress. This has come in the form of falling incomes even as output of agricultural commodities has soared. Seemingly paradoxical, this is the result of market imperfections. The manner in which agricultural output is sold has not changed much since the days of the licence- permit raj. Restrictions on the sale of crops from one district to another, quantity limits and, in most cases, severe clamps on yards where business can be transacted still remain in place. After the Goods and Services Tax (GST) came into effect, there is a single national market at least on paper. But in the case of agriculture, India is still a set of splintered markets.

In recent years, efforts have been made to create electronic platforms that can serve as alternatives to a unified single market, but they still have some way to go before a seamless market can emerge. The result is that periods with sustained increases in output are often accompanied by a decline in the prices that farmers get. India has seen a historic deflation in agricultural prices over the last few years. Much of the political turbulence in rural areas is due to this combination of good harvests but poor income in the hands of farmers.

All this makes an income-support programme an attractive option for any government. The challenge, however, lies in finding the resources to implement such a scheme and the administrative headaches that accompany the process. For one, the Rs 75,000 crore marked for it is not a one-off expenditure: it will be a recurring expense for which resources will have to be found every year. Politically, it is almost impossible for any government to withdraw these payments once the ball has been set rolling. The sum involved must be seen in light of the amount of money spent by the Union Government every year to ‘buy rural peace’. If one adds the outlay under the Mahatma Gandhi National Rural Employment Guarantee Act (MGNREGA) to annual food and fertiliser subsidies, it amounts to a tidy Rs 3.94 lakh crore. On its own, this conveys little. But when seen as a percentage of the Union Government’s intake, these expenses account for 20 per cent of its revenue receipts and 16 per cent of revenue expenditure in 2019-20. These are gigantic sums.

Even western countries can’t afford what India is planning: Guaranteed jobs and incomes for everyone

In contrast to this, the money spent on some major programmes for building rural infrastructure and promoting agriculture, such as the Pradhan Mantri Gram Sadak Yojna, the Prime Minister’s agricultural irrigation scheme, the national rural water drinking mission, and the green and white revolution programmes, is just Rs 51,467 crore. This figure is dwarfed by schemes to ‘buy rural peace’ that cost about seven times more.

IN REALITY, THESE ARE not ‘either-or’ choices and both are needed to sustain India’s farm sector. But because the Budget can only spare limited sums of money, the two have a zero-sum flavour to them: spending on one detracts from the other. If rural India has to catch up with urban levels of welfare, let alone incomes, then much greater spending on building rural infrastructure is essential. India’s fiercely competitive political system, however, is not geared to making such clear-cut choices.

In the days after the Budget announcement, the Kisan scheme has come under attack from two opposite ends. One set of critics says that the programme’s allocations are too low to be of any use. Another criticism, from the same set of critics, mostly on the left, fears that such direct income transfers are a prelude to the winding up of India’s welfare system. In simple words, this implies that spending on key welfare programmes such as healthcare and possibly even education will be wound down and farmers will be handed cash that will prove insufficient for their basic expenses.

But many economists dispute that. ‘[No] serious proponent of cash transfer policies views these as substitutes to the provision of public services or improving market access, both of which are important strategies for inclusive growth aimed at providing a more long-term and sustainable strategy for lifting the poor out of poverty,’ Maitreesh Ghatak, a professor of economics at the London School of Economics, wrote recently in an opinion piece on NDTV.com.

Professor Ghatak has calculated the cost of a range of such targeted income-support programmes for a section of Indians all the way to a full Universal Basic Income (UBI) for all citizens. He estimates that a scheme of the kind envisaged by Gandhi in his Raipur speech would cost around 1.5 per cent of India’s Gross Domestic Product (GDP), or 10 per cent of government expenditure. In contrast, a full UBI scheme will cost 9 per cent of GDP and more than half of all government expenditure, a prohibitively expensive option that few, if any, consider feasible. In this context, it must be remembered that Finland, the country that pioneered UBI, recently shut down a pilot programme after running it for two years. India, however, a country with 1.3 billion people, is an outlier in every respect when it comes to such ideas.

India is an outlier in another respect as well. It is the only country that has an employment-guarantee scheme run at the national level along with an income-support programme now in the works. This is a luxury that even Western countries cannot afford. Of course, the two programmes— MGNREGA and Kisan—are very different in nature. The job guarantee is supposed to be ‘self-selecting’ in the sense that the work under it is so difficult and unpleasant that only those who need it badly will go for it, while Kisan is meant to shore up the incomes of farmers who have not received adequate prices on selling their crops. As such, the latter is a targeted programme.

Can MGNREGA be discontinued and the resources that it frees up used for Kisan? This is an intriguing question and one that has got scant attention. But in one paper last year, Martin Ravallion, a professor of economics at Georgetown University and an authority on poverty, put this question squarely. In his study, ‘Guaranteed Employment or Guaranteed Income?’ (Center for Global Development, Working Paper, April 2018), Professor Ravallion took a careful look at the pros and cons of the two options based on material from India. He did not, however, make a prescription in favour of one scheme or the other. Comparing the country’s experience with employment guarantee programmes— from a job assurance scheme of the 1970s in Maharashtra to the current MGNREGA—with a possible UBI, he argued that the latter could lead to better reduction in poverty. He based his conclusions about MGNREGA on data from Bihar that showed the programme was not performing anywhere close to what was desired. ‘It appears then that NREGA would need to generate sizeable indirect benefits to participating workers (such as through the assets created), and those future benefits would need to be valued sufficiently highly, before NREGA dominates a revenue-neutral UBI.’

The additional advantage of an income transfer plan— UBI or some other targeted option—is that it is likely to have much lower administrative costs and the kind of corruption that has been seen in the case of MGNREGA. It is also important to note the sequencing of these programmes. A scheme like Kisan was not possible even five years ago as the basic infrastructure required for it—a sufficiently large number of beneficiaries having bank accounts, a system to cross-check and root out ‘fake’ or duplicate accounts by Aadhaar, and the fiscal room needed to fund it—did not exist. Much of this could have been done earlier had so-called civil society groups not secured judicial verdicts to restrict the scope of Aadhaar in the name of privacy. The damage done in the name of the right to privacy is likely to be borne by the poor farmers of India.

For all such schemes to be successful, they need to be kept simple. If eligibility criteria are made complex, then it is likely that a large number of people will be excluded or the system will be gamed in favour of those who don’t deserve such benefits. The minimum income guarantee scheme, which promises a kind of ‘top-up’ in case a person’s income falls below a certain threshold, has been criticised by Arvind Panagariya, former vice-chairman of the Niti Aayog, as being prone to manipulation. In that context, schemes like UBI or some variant of it have features that rule out these problems. But whatever one may say, the time for direct income transfers in a country like India is here. The question is one of rationalising existing programmes and bundling benefits into a single scheme that directly reaches those whom it is meant for. If that happens, it will change India’s political and economic landscape in the years ahead.