The View from the Summit

The dividends of beauty, family, friendship and 25 years of life in the hills 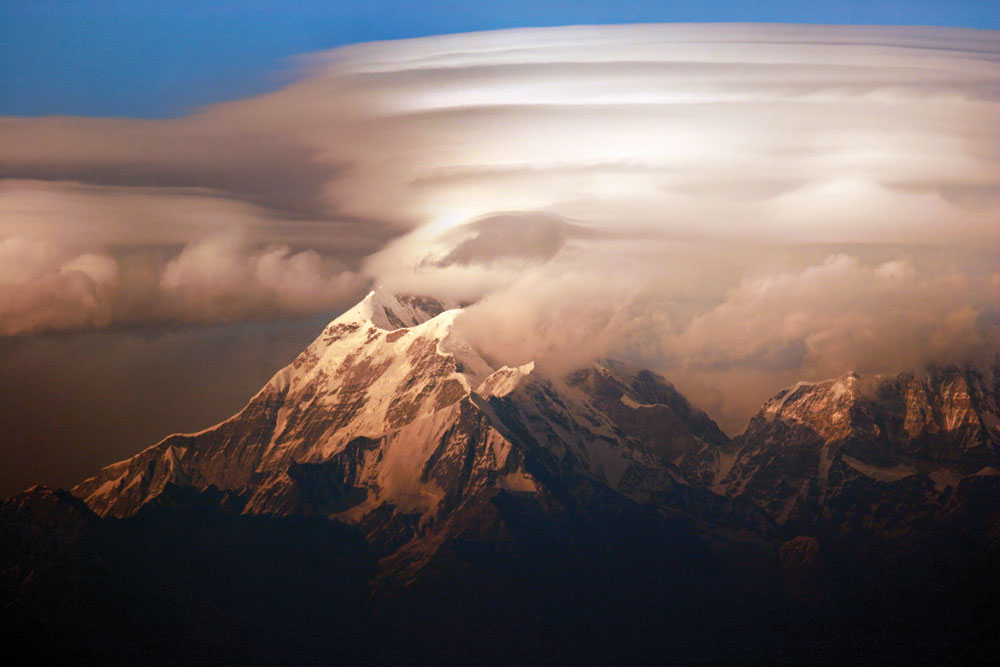 
I AM WRITING this on our 25th wedding anniversary, a perfect autumn day in the Kumaon. The sun floods through the windows of our living room, lighting the flowers in the vase as if from within. We inherited the vase from my parents, and Bhuvan—caretaker, gardener and mason—replaces them every few days. Last month, he renovated the little stone temple he had built in the garden, now buckling under the weight of an oak branch. Today, he sprayed white chrysanthemums inside the shrine; while Shekhar blew the conch, we said a small prayer, then exchanged garlands, photographed for the record by our neighbours.

How many ways can you count your wealth? We count ours in beauty and grace, in family and friendship, in health, and above all, in our hearts.

Every year, at this time, I remind myself that, while Lakshmi is the goddess of wealth, money is only a means; beauty is a greater pursuit, and my journey must be a search for deeper meanings of beauty, within and without.

We moved to this hillside shortly after we got married, a great leap of faith into the beauty and the challenges of living in the forest. I was 40, Premila 31, and we had some savings, but we didn’t know how long they would support us. In 1997, living away from the city, we were largely cut off from the urban livelihoods for which we were schooled. I earned a modest retainer from a snack food business I advised, and Premila occasionally edited conference transcripts. We were surprised to see how far the money went. The staples of life are cheap, and the frills were simply unavailable in the two tiny shops that serviced our daily needs. We visited Delhi every three months, Bengaluru at Christmas, and had enough for cheap lodgings on our annual beach holiday—in Goa, or on the Karnataka coast. We didn’t have to dip into our savings, which were invested in the stock market, and slowly gathered weight.

After Shekhar Kapur made the film Elizabeth (1998), he was asked what its success meant to him. “I’ll never have to think twice about buying a book or record again.” His reply ignited a spark of envy, but a couple of CDs and a few paperbacks at a time, our shelves, crafted by local carpenters, filled with stirring music and beautiful words. Our precious child, Kedar, was rocked to bed by the pounding of Dave Matthews Band and the soaring vocals of Eddie Vedder. When he was asleep in the loft, we read in the stillness of the night, now lit by stars, now by the waxing moon, now shrouded by monsoon clouds.

By 2000, I began to feel the need to share our life with my parents—their grandchild, the intense beauty in which we lived. They had rented a tiny cottage in a lovely spot outside Ranikhet, but when my sisters visited, it was way too cramped for three generations. Our own stone hut was only built for a little family; besides, it was a 15-minute trudge up the hill. In 2001, I was able to buy a piece of land on the road, directly below us; over the next year, I watched the masons chisel stone and shape it into a compact cottage with three bedrooms. In the nature of such projects, the house ran over budget, and even as the furniture was shifted from Ranikhet to Satoli, I worried about how our nest egg would deal with the hit.


But now my sisters each had their own space on the hillside. My niece and nephew slept with us, but come morning, they would troop down to their Nani and Nanu, our son toddling down the forest path with them. My father taught them to play carrom on the veranda, my mother indulged their love for Maggi, and every week, I drove them to Sattal for a swim and a boat ride. That summer, we accumulated a treasure trove of memories.

When Kedar needed to go to school, we moved back to Delhi, and both Premila and I found things to do, and work to support an urban existence. But nothing that would keep us away from those summers with family, from autumn sunrises over Nanda Devi, from winter nights by the fireplace. I would not offer up my freedom to the monster of office routines. Slowly, the city yielded. After 15 years, I was on the stage again, taking Shakespeare to schools. My homegrown understanding of equities found me a role as consulting editor for a financial magazine. A business family I had advised over the years asked me to help restructure the group.

Now we had money to travel the world. We ticked off the bucket list—sailing a tiny yacht off the Greek coast; cycling from Zurich to Munich; trekking in the Rockies; tracing Darwin’s journey through the Galápagos Islands. Meanwhile, as my understanding of Indian equities grew, so did our nest egg. When fallow land around our home came up for sale, we reached into our savings, and planted two acres of forest.

When my parents passed, I wondered aloud what I should do with their mountain home. Kedar must have played some version of this to his cousin, Rishi, who drove right over.

“You can’t sell that house, Mamu! It’s part of our family.”

This June, Rishi drove his sister Pia into our hills. We had lunch on the veranda, Nani and Nanu’s bedroom now home to Premila’s parents. They had come for a month, but with Covid raging in the plains, I urged them to stay. My mother’s love of her garden transmuted into a paper napkin on which my mother-in-law recorded the names of 43 flowers she had seen blossom, as spring gave way to summer, then to the rains. Now, my wife ran the family home, and her mother dipped into my mother’s library, reading more deeply than in the last 25 years.

Back in Delhi, my theatre friends were idled by the pandemic. The performance space I had helped nurture was a dark shell. The Jaipur Literature Festival moved from Diggi Palace to the internet, and conjured up enormous audiences, but digital revenues don’t scale enough to pay salaries. This was the time to test my support for the arts, and dig deep into our savings. Premila agreed that we must help the arts bridge the chasm to the future. Times of distress will yield powerful artistic work, but only if they don’t take down the artists and their managers.

Every year, at this time, I remind myself that, while Lakshmi is the goddess of wealth, money is only a means; beauty is a greater pursuit, and my journey must be a search for deeper meanings of beauty, within and without

Most small businesses, too, were hard hit by the economic circumstances of the last few years. Since 2015, I had begun to invest in startups, an extension of my abiding interest in equity markets. Gradually, I began to get drawn into the ecosystem. One young entrepreneur heard me give a talk on the future of Ayurveda in the digital age, and asked if I would mentor his business. Six months later, he asked me to champion his cause with other “angel” investors like me. Now I was a “lead investor”, someone who had spent time in understanding a startup, and developed enough belief in the business to invite others to co-invest in it.

By early 2020, I had invested in over 30 startups. The onset of the pandemic turned some startups into instant stars, as internet usage soared and Indians shopped from home, studied online and e-consulted doctors. Others floundered as employment and consumption slowed. The received wisdom in the startup world is to focus on the winners, as they can multiply your wealth several times over; others should largely be ignored. But the last two years have been quite unprecedented, and I cast off the constraints of preconceived notions. I drew down cash balances and committed funds to businesses in trouble. I was charmed by the solidarity of other investors; founders responded in kind, cut back salaries and administrative expenses. It is an incredible testimonial to the grit and tenacity of our startup founders that not one of these startups shut down during the pandemic.

We recently drove north from our village of Satoli to see the snows from up close. Even after 25 years, our greed for pretty sights knows no bounds. In Kausani, we shared brunch with David Hopkins, an old friend who has run a weather station there for 35 years. “The Met forecasts over three inches of rain tomorrow,” I shared. “Over 80 mm. In October? Unlikely.” We reached Chaukori driving in the rain, and were confined to our cottage for 36 hours. During brief spurts of connectivity, family and friends reached out in concern. Staff and neighbours from Satoli shared videos and updates of the rain and the damaged roads. After three nights in Chaukori, we were able to head out to a magical spur, high above the Ramganga, and watch the leela of the clouds and the moon, of the sun and the Milky Way.

When we returned, on Sunday, the road home was a ribbon of destruction, of felled tree trunks, and vast boulders cast adrift from the hills. The tarmac was pitted and cratered; at several spots, entire sections had disappeared into the valley. David e-mailed to say he had recorded 215 mm rainfall in 24 hours, a third more than the previous record. News filtered in from neighbours, of courtyards dissolving into mudslides, and cowsheds crumbling, as terraces collapsed.

Instead of wedding vows, we recited the Gayatri mantra, the prayer to summon the light within. May we find the strength to find grace under fire, to do our bit to restore the beauty of this hillside, which has nurtured our souls for 25 years.