The Valley of Paradoxes

Between abrogation of Article 370 and district-level polls, no one is sure yet which way the pendulum will swing in Kashmir 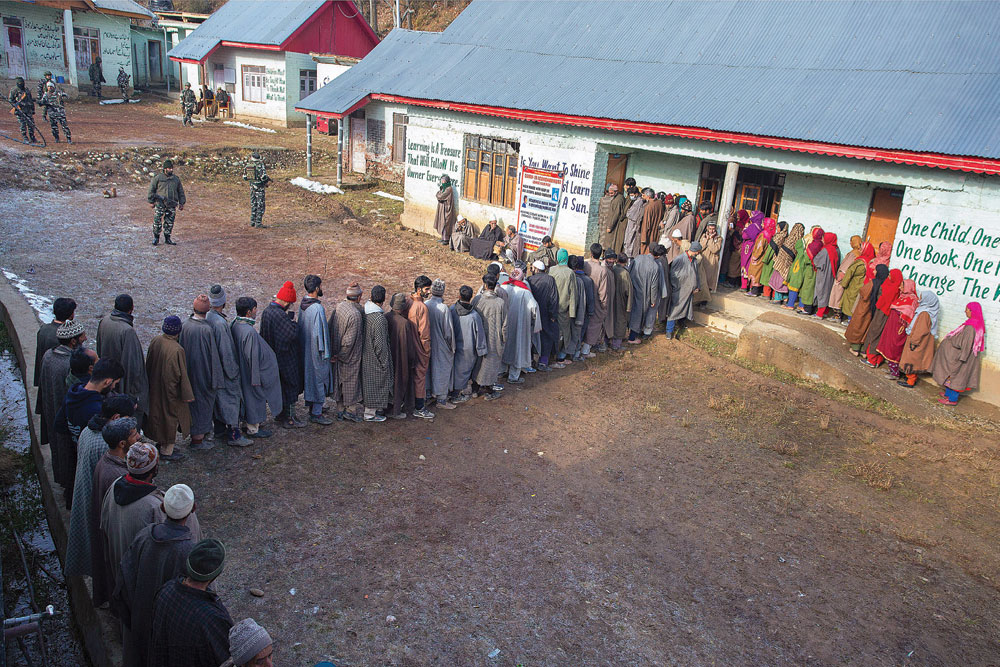 A queue of voters for the DDC elections in Baramulla, December 16 (Photo: Abid Bhatt)


In October 2019, in Kashmir, two months after the abrogation of Article 370, the Indian Army held a recruitment drive in Srinagar to fill a few hundred vacancies. On the first day, about 2,000 young men appeared at the gates of the Army’s Jammu and Kashmir Light Infantry (JAKLI) centre.

The drive particularly saw men from South Kashmir being screened for recruitment. As Army personnel kept watch, hundreds of them, in vests and shorts, participated in physical fitness tests, hoping to be selected.

Kashmir watchers are used to such paradox. From July 2016 onwards, since security personnel killed Burhan Wani, the commander of the Pakistan-based terrorist organisation Hizbul Mujahideen, in an encounter, South Kashmir remained close to being a war zone. Terrorists—young Kashmiri men like Wani, hardly trained, and their Pakistani handlers and trainers, trained well in camps in Pakistan and Afghanistan—found a safe refuge in big pockets, enabling them to carry out deadly attacks like the one on a convoy of the Central Reserve Police Force (CRPF) in Pulwama in February 2019. It was not unusual to see terrorists appearing at the funeral of a slain terrorist and cheered on by thousands of people, especially young men.

And yet, some from the same areas ended up on an Army recruitment drive to be part of the force they supposedly abhor so much that, several times in the past, they have come to throw stones at its personnel while they were engaged in gun battles with terrorists trapped in houses.


It was not unusual to see terrorists appearing at the funeral of a slain terrorist. And yet, some from the same areas ended up on an army recruitment drive to be part of the force they supposedly abhor so much

Both these sides of the Kashmir story are true at the same time. Perhaps nothing reflects it better than the case of a young man called Mudasir Khan, one of the terrorists involved in the Pulwama suicide attack, which resulted in the killing of 40 CRPF personnel. Khan had helped the terrorist organisation Jaish-e-Mohammed in making the bomb used in the attack. He was killed soon afterwards in an encounter with the security forces. His father told investigators from the National Investigation Agency (NIA) that he had always wanted to wear a uniform and had expressed a desire to join the police.

But then he ended up with Jaish and shortly afterwards in a grave as a slain terrorist.

It is easy to get carried away by stories of how young men in Kashmir become terrorists. They often say that the men who crossed over the Line of Control (LoC) in the late 1980s and returned to start the insurgency in Kashmir were just ruffians who had no idea what they were fighting for. They said they were fighting for an independent Kashmir whereas it soon became clear that it was a euphemism for merger with Pakistan.

By the mid-1990s, it was clear to a majority of those who picked up arms and their ideologues that India was never going to let go of Kashmir. So they adopted ways to make money from both Pakistan and from the Indian state that was desperate to see a solution. In the name of asset-building by intelligence agencies, many, who should have been tried for murder, became political leaders, some even ‘Gandhians’, and continued to make the best of the turmoil.

Even as these games were being played, Kashmiri society was gravitating towards a more rigid form of Islam, resulting in radicalisation of young people like Mudasir. With the help of media narratives, though, a very dangerous spiel would be offered every time a terrorist was killed.

When Burhan Wani died, his father said he had become a militant after he and his brother were beaten up by the police for no reason. But nobody asked what kind of lessons he, as a member of the fundamentalist Jamaat, had imparted to his children.

The same story gets churned many times, year after year. Even last year, after Sajjad Bhat, one of the conspirators of the Pulwama suicide attack and an active Jaish terrorist was killed, his relatives told journalists it was because they had been harassed by the police. But Bhat’s father did not mention that he was a hardcore Jamaat member and had sent his son to a religious seminary in Shopian affiliated to the Jamaat-e-Islami, now banned in the state. In October this year, a crackdown finally happened on the seminary, Jamia Siraj-ul-Uloom, leading to the arrest of its three teachers under the Public Safety Act (PSA) for anti-national activities. Investigating agencies found that 13 of its students had joined terrorist groups.

It was in Shopian in 2009 that a major lie was constructed around the deaths of two women, which continues to be used as a weapon against the Indian state. The two women were found dead in a rivulet that year in May; right afterwards, it was alleged that the two had been raped and killed by security forces, leading to a major unrest in the Valley. In the din raised by the separatist machinery in Kashmir, aided by their sympathisers in Delhi and elsewhere, truth became a casualty.

That the women could have drowned was rejected at once. This, despite the fact that between 1995 and 2008, 10 other people had died by drowning in the same rivulet, while three more did between 2010 and 2013. It was only after an independent team of doctors from Delhi’s All India Institute of Medical Sciences (AIIMS) performed another autopsy on the two bodies, ruling out rape and establishing their deaths as asphyxia (from ante-mortem drowning), that the conspiracy was unearthed. Later, the Central Bureau of Investigation (CBI) found six Kashmiri doctors, among others, responsible for fabricating evidence. One of the doctors, the CBI found, had fudged the vaginal swab samples to falsely show that the women were raped.

But even years later, the two deaths were being used as a propaganda tool by Islamist radicals. A 16-year-old boy in Kulgam in South Kashmir said in 2017 that the doctors conducting the post-mortem of one of the drowned women had found five litres of semen inside her body. He said he was told this in a conference in his village.

Even as these things were happening, the Centre went ahead with the abrogation of Article 370 in August last year. This was something nobody had expected. It happened along with a ban on the internet and mobile networks. Hundreds of people were picked up and detained, including overground workers of
terrorist organisations.

Nobody was sure what would happen and how Kashmiris would react. While additional forces were rushed to the Valley, the Government was prepared for casualties in the wake of clashes after possible mass protests. The milk would come to a boil at some point, police officials said.

Yet, even as months passed, nothing of this sort happened. Of course, young men kept on joining terrorist organisations and got killed in security operations. But for the majority, a dividing line they always visualised in their minds between Kashmir and the rest of India was erased.

Whether this erasure will bring long-lasting peace to Kashmir, getting rid of New Delhi-encouraged political schizophrenia in Kashmiri minds, is yet to be seen. There are no indications so far that radicalism has ebbed in Kashmir. This means that there will be people ready to carry Pakistani terrorists from the International Border in the Jammu sector and bring them to the Valley to strike and create mayhem. Till October this year, over 200 terrorists were killed in encounters. Most of them, according to the police, came from four districts of South Kashmir.

A year ago, the Government finally withdrew 72 companies of paramilitary forces, sent to Kashmir for additional security requirement in the wake of the August abrogation. But there has been an increase in infiltration attempts, with Jaish sending its terrorists to carry out Pulwama-type attacks.

That Pakistan’s attempts to disturb the peace in Kashmir will continue is clear from the fact that, recently, its Prime Minister Imran Khan appointed Sheikh Rasheed as the country’s new interior minister. Rasheed is close to terrorist organisations and has been known in the past to have run training camps for them. It was at his farmhouse in Rawalpindi in the late 1980s that many among the first batch of Kashmiris to have crossed over received training in arms. He has been in the past detained in the US for his links with the terrorist organisation Lashkar-e-Toiba and terrorist masterminds like Hafiz Saeed. After the abrogation of Article 370, Rasheed said that the last battle for the ‘liberation’ of Kashmir had arrived.

For its part, the Narendra Modi Government has forced Kashmir’s two main regional parties, National Conference (NC) and Peoples Democratic Party (PDP), to come together, along with a couple of others, to fight the District Development Council (DDC) elections jointly. In the fourth phase, the Kashmir division recorded an average turnout of 31.95 per cent. This phase included voting in terrorist hotbeds like Shopian and Pulwama which saw very little voting. But still, many people came out in the harsh winter cold and said that they were voting in the hope of some development.

Some of the same lot may come out any time and begin pelting stones again at a police vehicle.