We ignored the warnings of both history and geography 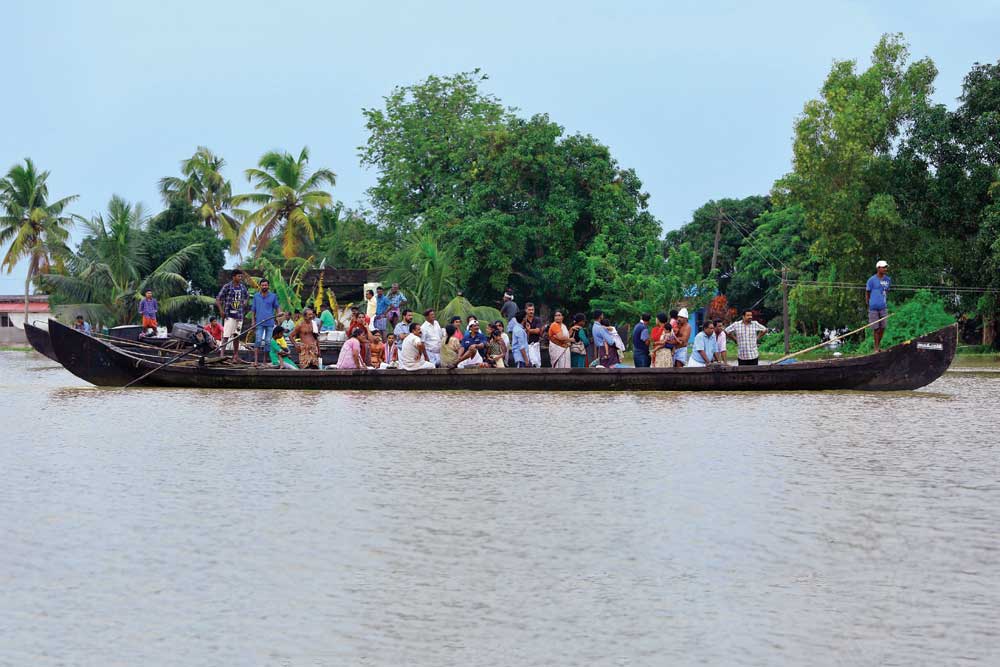 Water is the leitmotif of Kerala. According to mythology, Kerala, a sliver sandwiched between the Arabian Sea and Western Ghats, was a gift from Varuna, the God of Water, to the warrior sage Parashuram, the sixth incarnation of Lord Vishnu. The sage threw his axe from Gokarna across the ocean and Kerala arose where it fell, says the legend.

Myths apart, history too proves that Kochi, Kerala’s largest commercial port city, was formed by a great flood that altered the course of the Periyar river and accreted a new landmass in 1341 CE. Kerala is endowed with a large number of rivers and high rainfall. It is India’s gateway for the monsoons and home to a unique water body—the sprawling backwaters. Water has defined not just Kerala’s geography but its history and economics too. Thanks to its strategic coastal location, traders from all over the world had sailed to its shores from time immemorial looking for spices; later, it opened the way for colonialism to enter Asia. The watery abundance keeps God’s Own Country the greenest in India and also helps sustain its main source of income: tourism.

Yet, water is not a motif of life and sustenance alone, but often also of death in Kerala, as in William Faulkner’s The Sound and the Fury. Thanks to the large number of water bodies across the state, drowning is one of the major causes of unnatural deaths. Children constitute the majority in this toll, which peaks during summer vacations when they take to water to play or swim. According to a study by Dr Muralee Thummarukudy, chief of Disaster Risk Reduction in the United Nations Environment Programme, as many as four persons drown every day on average in Kerala.

The dance of death by water was diabolically displayed in Kerala this August when the state was hit by its biggest flood in almost a century. The record rainfall that Kerala had from June 1st to August 15th—30 per cent more than normal—flooded two of the state’s biggest rivers, the Periyar and Pamba, and wreaked havoc all the way to the Arabian Sea. On the apocalyptic day of August 16th, Kerala was pounded by a horrendous downpour of 137 mm, which was ten times more than normal.

The state was devastated. The death toll in just one week was astounding: 252 dead (still counting) and nearly 10,000 seriously injured. The elemental fury of water destroyed crops across 46,000 acres and damaged more than 10,000 houses. The total losses, according to the state government, amounted to Rs 20,000 crore. When reservoirs overflowed, the shutters of 33 dams had to be lifted. Once the floodgates opened, roads and bridges were battered to pulp, hills ripped open by landslides, hot tourist destinations like Munnar in the high ranges submerged, and famed hilltop temples like Sabarimala got marooned. The swank Cochin International Airport was inundated. A million people had to be rescued from across Kerala and housed in temporary shelters.

The state government, armed forces, Coast Guard and National Disaster Response Force sprung into action, along with hundreds of fishermen, to brave the gushing waters and rescue as many as possible. The massive rescue and rehabilitation effort put in by civil society, with thousands of youngsters queuing up as volunteers, has raised Kerala’s collective spirit. Though the state government is peeved that only Rs 600 crore was allotted as an advance by the Centre after Prime Minister Narendra Modi’s flash visit, as against a request for an immediate relief sum of Rs 2,000 crore, generous donations are flowing in from all around, including other states and Gulf countries, where at least an estimated 2.5 million Malayalis live. The UAE alone has announced an aid package of Rs 700 crore.

Though Kerala is criss-crossed by rivers and other water bodies, major floods have been a rarity. The state has had only one other major flood in the past century owing to the fairly uniform rainfall across the state. According to meteorology experts, the present situation was triggered by a rise in sea-level temperatures, causing the formation of two unusually low-pressure areas in the Bay of Bengal that developed into a depression. This attracted moist winds from the Arabian Sea which had to ascend the Western Ghats, resulting in heavy showers along the windward slopes that flooded the rivers. The swollen rivers in turn led to the dam reservoirs brimming over, and the water let out went gushing downhill to submerge the state en route the sea.

Environmentalists lament that the disaster was waiting to happen. After all, the state has faced severe ecological degradation in the past few decades of frenetic unplanned growth, thanks to its prosperity attributable in large measure to remittances from its Gulf-based diaspora. Though the proximate cause was the unexpectedly heavy rains, ecologists say much of the blame lies with deforestation and activities like mining and quarrying in the Western Ghats, where Kerala’s 40-plus rivers originate.

Political parties and religious groups buried their differences to collectively defeat the recommendations made by the Centre- appointed committee headed by environmentalist Professor Madhav Gadgil in 2011 to end the ecological destruction of the Western Ghats. According to Gadgil, this flood is largely man- made and caused by the ravaging of the ecologically fragile Ghats. Stripped of their forest cover, the hills could not retain as much water in their folds as they once could. “The magnitude of the tragedy would have been much lesser if proper steps were undertaken to preserve the Ghats,” feels Gadgil. My generation has grown up listening to stories and legends from grandparents about Kerala’s worst floods, which occurred in 1924 and are etched in the Malayali psyche as the ‘99 le vellappokkam’ (floods of 99), marking the Malayalam calendar year. Those were much greater in magnitude as were caused by larger rainfall (3,115.3 mm compared to 2,945 mm now) that lasted 24 days, and the death toll was about 1,000 (an exact number is unavailable).

Notwithstanding the size, there are many similarities between both events. Eerily, since the flooding occurred in the same rivers on both occasions, the deadly paths followed by both appear almost similar. The towns or even tiny villages and some buildings which were worst hit on both occasions are the same, in spite of being separated by nearly a century and hundreds of kilometres. The similarities have even challenged the theories of environmentalists who have placed the blame on recent phenomena like human-induced climate change, wanton destruction of forests, excessive human habitation in the sensitive hills, reckless construction on reclaimed water bodies, mining in the mountains, brazen sand-mining in rivers, huge dams, choked natural water channels, etcetera. Ironically, the Cochin International Airport that was inundated is this year’s winner of the ‘Champion of Earth’ award—a top environment prize—for being a fully solar- charged airport, though it was built 23 years ago on reclaimed paddy fields that had served for long as a water sink.

The devastating floods of 1924 had occurred long before any such ecological offences were committed. This has prompted many to explore deeper causes for the recurrence of such severe floods after nearly a century. However, it is true that the 1924 floods too had much to do with human activities, since the large- scale deforestation of the Western Ghats had begun as early as 1860 with a massive clear-felling operation by Europeans; the Mullaperiyar dam was built in the 1880s.

During the 1924 floods, many people had saved their lives by running to the hills. Those floods occurred when the legendary Vaikom Satyagraha led by Mahatma Gandhi was going on in Kerala for the right of ‘untouchable’ castes to use public roads around temples. According to reports, neither heavy showers nor floods deterred Congress volunteers from continuing their satyagraha, as they were seen standing in neck-deep waters near the Shiva temple in Vaikom. ‘But in many parts of Kerala, the flood waters had swept away untouchability,’ said a news report of those days. When the floods let loose their fury, people ran to hilltop temples and churches. In temples, many Brahmins were seen cooking and serving food to ‘untouchables’ at the time.

Not just the flood path, but even the immediate causes of the devastation brought about by both the floods appear similar. The state government and Kerala State Electricity Board (KSEB) today stand accused of inefficient dam management. Being hotly debated in the aftermath of the floods is the opening of the shutters of 33 dams simultaneously and rather late in the day, instead of water being released gradually in stages and well in advance. The KSEB had refused to open the shutters of the Idukki dam even when the reservoirs were filling up in early August, saying it would cause huge losses. There are also complaints that the shutters were opened without issuing precautionary notices sufficiently early to people living on river banks vulnerable to flooding.

Official records of the 1924 devastation also point to a similar lapse. The land development and income tax commissioner in a letter dated August 26th, 1924, to the chief secretary quotes a tea planter, P John John: ‘During the last floods, my tea estates Karimkulam and Karimtharuvi, sustained heavy losses. This was mainly due to the indiscriminate working of the sluice valves of the Periyar dam without giving any previous warning… [The] water level in the lake had risen much over the maximum limit and they opened the sluice valves to the full height thereby flushing the river… The water came down like a wall more than 30 feet in height and swept away everything before it…’

Thummarukudy had made a chilling prediction as early as 2013. “Remember the great floods of 99. In the past 50 years, we have made all the constructions ranging from a pesticide factory to an international airport in those areas which were flooded in 1924. That the same areas would be flooded again with a heavy downpour is a statistical certainty. When we build our supermarkets and flats, it would be wise to know if the lands were flooded ever in the past. People would forget the level to which a river could rise after the passage of a generation. But nature never forgets. Even after decades and centuries pass, the river would come back to recapture its borders….” But nobody listened to the Cassandra, and we have paid the price.

Ecological Lessons
After the Deluge
Horror and heroism