The Evidence From Ladakh

What old maps say about Chinese claims on Indian territory 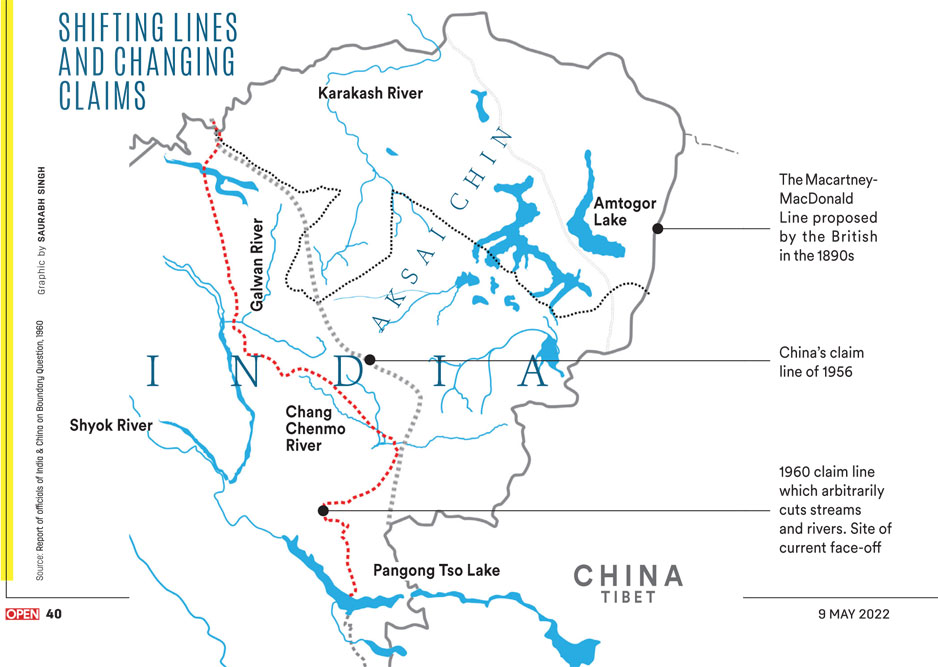 
SINCE THE 1960S, IF NOT EVEN BEFORE THAT, THE Chinese argument on the boundary with India in the Ladakh area as well as the Northeast has suffered from a significant contradiction. While arguing that the line claimed is a “traditional” one forged by thousands of years of history, the Chinese have shied from considering a consistent geographical principle that might shape national boundaries. Rather, China has adopted different geographical criteria to move the goalposts at will.

The creeping nature of Chinese cartographic encroachment which seeks to provide the justification of the nibbling tactics (often referred to as salami slicing) of its military was noted decades ago by Indian officials who were able to see through the fog of manufactured claims and partial reading of maps, treaties and administrative records. “The line claimed by them [the Chinese] is an irregular one turning south from the subsidiary range on which the Karakoram pass is situated, at a point east of the pass, and then arbitrarily cutting across the river valleys of Chip Chap and Chang Chenmo,” says Gondker Rao in The India-China Border: A Reappraisal, first published in 1968 (see map). The book studies at length the invaluable “Report of the officials of the governments of India and the People’s Republic of China on the Boundary question” that examined the evidence on border claims. Set up after the 1959 talks between the prime ministers of India and China failed to resolve conflicting positions, it casts light on the political and ideological nature of the dispute.

Inevitably, there were Chinese and Indian versions of the report, but the material discussed by Rao and others shows how the Chinese claim lines follow no watershed principle, a natural separation between territories and nations in mountainous areas unaffected by political changes. The Shyok and Chengmo basins are inhabited by Ladakhi people and there is no set of features that is a natural barrier between the main Karakoram Range and the Kuen Lun (Kunlun) Range. Rao, who was an advisor to the Indian team that met Chinese officials, was well placed to review the materials. While he persuasively argues that there is no credible record of Chinese sovereignty south of the Kunlun, in the more immediate context it is clear that China’s current claims are far south of the Macartney-MacDonald Line (a proposed boundary in Aksai Chin) and are a result of decades of incremental intrusions which cut across the Galwan river, the site of a bloody clash between Indian and Chinese troops on June 15, 2020.

In the context of the Sino-Indian boundary in Ladakh, the ongoing site of military tensions, there have been migrations but no political invasions. Even in the case of invasions through the mountains in the northwest, political frontiers did shift back and forth but essential national boundaries are broadly identifiable. The presence of people of Tibetan stock in Ladakh, Nepal or Sikkim does not alter the traditional basis of a watershed boundary, Rao has argued. In fact, India has resisted attempts to lump ethnicity with boundary delineation. There are maps and surveys by British officials and cartographers from the mid-1800s onwards that clearly show the boundary with the Indian alignment along the Kuen Lun. On the other hand, there is a dearth of Chinese surveys or maps. Later Chinese postal maps from 1917 to 1933, a careful compilation of official material, make it clear that Aksai Chin was never surveyed for the simple reason that it was not part of China’s territory. The 1684 treaty between Tibet and Ladakh, disputed by China, ratified a boundary that had long been in existence. There are references to it in Tibetan literature and led to an exchange of missions for several decades. The treaty of 1842, notes Rao, came about after fighting caused by Zorawar Singh’s attempts to extend the Kashmir frontier and agreed not to alter boundaries “fixed from ancient times”.

The historical record is relevant in the light of arguments suggesting an equivalence or ‘two sides’ to the story. A compromise that takes into account ground realities might be a practical solution but China’s claims to a boundary that intrudes well into Indian territory lacks evidence considered when examining a traditional boundary. Acknowledging Tibet’s independent past is anathema to China, but until it was annexed in 1951, the kingdom did exercise the right to sign agreements. More than five decades ago, Rao wrote that “mere assertions” that the Chinese boundary always lay across the Chip Chap, Galwan and Chang Chenmo rivers or at the Kong-ka pass carried no weight. In his foreword to Rao’s book, S Gopal, who headed the research for the Indian side in the 1960 talks, notes that the boundary dispute arose due to China laying claim to large parts of Indian territory: “A clear understanding of the border problem is essential to grasp the current dimensions of political and ideological tones of the controversy.” The lesson remains relevant even today.