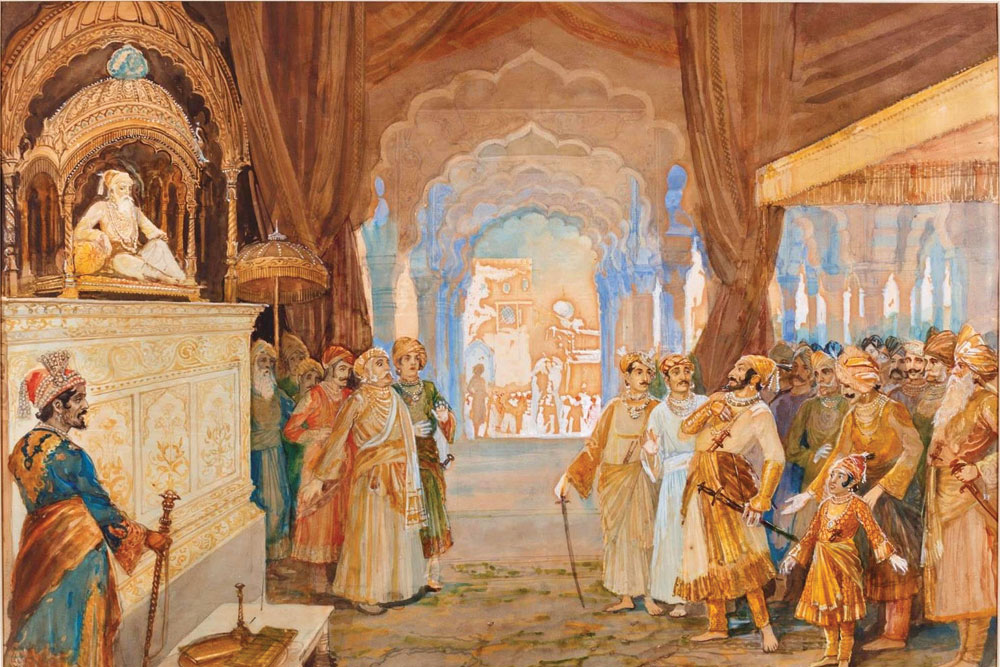 
A REVOLT HAD TAKEN PLACE, HEADED by a gentile of Visapour (Bijapur), who made himself master of several important fortresses and one or two seaports belonging to the King of that country. The name of this bold adventurer is Seva-Gi (Shivaji), or Lord Seva. He is vigilant, enterprising, and whol­ly regardless of personal safety”. The brief but revealing description is French traveller François Bernier’s intro­duction to an intrepid warrior whom Mughal emperor Aurangzeb is believed to have referred to as a “mountain rat”, a possible expression of exasperation or an early un­derestimation of the challenge the Maratha warlord was to pose first to Bijapur and later to the authority of the Mughal sovereign.

Just as Aurangzeb’s long reign and its dismal conse­quences, both for the Mughal empire and communal relations more than three centuries after his death, continue to influence the public discourse, the life and times of his chief tormentor have found fresh political resonance. The decision of Uttar Pradesh (UP) Chief Min­ister Yogi Adityanath to rename the Mughal Museum in Agra after Chhatrapati Shivaji in September 2020 was accompanied by his assertion that the Mughals could not be “our heroes”, a reflection of his view that the Tur­kic dynasty was essentially a foreign imposition. The move immediately attracted criticism from Samajwadi Party (SP) leader Akhilesh Yadav and became another instance of carping between advocates of Hindutva and their secular opponents.

But the theme of Shivaji as a great symbol of resistance to foreign rule runs strongly through ‘nationalist’ political nar­ratives. His daring exploits and the enduring nature of his legacy that laid the foundation for a century of Maratha supremacy post-Aurangzeb make him a symbol of resistance and a saviour of native faith and tradition. More recently, Prime Minister Narendra Modi invoked his name, saying that for every Aurangzeb, India has produced a Shivaji. The remarks, just as the decision to rename the Mughal Museum, were far from casual. Like Mewar’s Maharana Pratap, the Maratha king is celebrated for his military resistance to Mughal rule. He was hailed by Samarth Guru Ramdas, one of several Bhakti saints from Maharashtra, as a protector of the Hindu religion and way of life. Whether Shivaji and Ramdas actually met is disputed and accounts vary, but the saint seems to have had an influence on the Maratha warrior who imbibed a fierce pride in his native cul­ture and tradition from mother Jijabai who had brought him up.

Aurangzeb’s well-documented acts of fanaticism and bigotry, such as the re-imposition of Jizya and razing of temples provided the backdrop for Shivaji’s insurrection in the 17th century and the long shadow of that clash of arms continues to play out in contemporary settings as part of an ideological and political battle. The move to reduce the salience of the Mughals in text­books and the greater emphasis on homegrown ‘patriots’ is seen as a correction or restoration of certain historical figures to their rightful stature. The matter is hotly contested with academics critical of the Bharatiya Janata Party (BJP) seeing a plot to rewrite history while advocates of ‘rebalancing’ curricula claim that giving Shivaji and others their due is a much-needed revision of the Marxist influence on school and university texts. What is certainly in discussion is the elevation of such personages in narratives that have often glossed over the clear role of faith as a motivating factor for certain historical figures who stood up to the Mughals. The debate is now around a cultural vision set out by the prime minister and the charge of majoritarian­ism levelled by his opponents. Speaking on the 100th birth anniversary of Babasaheb Purandare, who wrote extensively on the life of Shivaji, Modi referred to “Hindavi Swaraj”, a term attributed to the Maratha, and said it was the finest example of good governance. It has been argued that Shivaji was not “anti-Islam” and in his conduct with captives, particularly women, he showed restraint and respect not associated with his times. But it is equally true that a desire to resist foreign subjugation and alien rule formed the core of his beliefs. Life in the 16th-17th centuries was dangerous and uncertain and, to borrow a descrip­tion of the Middle Ages, could be nasty, brutish and short. But even by prevailing standards, certain acts of brutality stood out as conquest was often accompanied by oppression that included assaults on the faith of the vanquished. Several Bhakti saints, from Jnaneshwar, Eknath to Ramdas, lamented the weakened state of Hindu society and the decline of religion.

THE TREATY OF PURANDAR IN 1665 WAS A LOW POINT in Shivaji’s career as he was forced to accept Mughal over­lordship by the shrewd Mirza Raja Jai Singh who succeeded where mighty commanders like Azfal Khan and Shaista Khan failed. The former lost his life in a famous encounter near Prata­pgarh Fort and the latter barely escaped with his life, sustaining severe injuries in the process. Cornered, Shivaji had no option but to present himself at the court in Agra where he lived an un­easy existence before making a daring escape. The connection to Agra is significant as after his return Shivaji did not look back and consolidated his gains and was anointed as Chhatrapati at Raigarh in 1674. “This man is exercising all the powers of an independent sovereign, laughs at threats of both the Mogul and Visapour king… ravages the country on every side, from Sourate (Surat) to the gates of Goa,” wrote Bernier. The raids on Surat that caused much distress to merchants first attracted the attention and wrath of Aurangzeb. Shivaji’s initial clashes were with Bija­pur, the sultanate his father Shahaji served, but his showdown with Aurangzeb was inevitable.

Aurangzeb continued his battle with the Marathas after Shivaji’s death with hardly any more success. In fact, his fully fledged Deccan campaign began after the Maratha leader’s death and even though Shivaji’s successors lacked his grit and enter­prise, they were able to frustrate the emperor who understood only too well the dire consequences of the political challenge posed by the rebel kingdom. Though historical events and an evaluation of Aurangzeb and Shivaji are very much part of the current debate, the canvas is more political and cultural. In the telling of different stories, lies a matter of contesting convictions and faith.