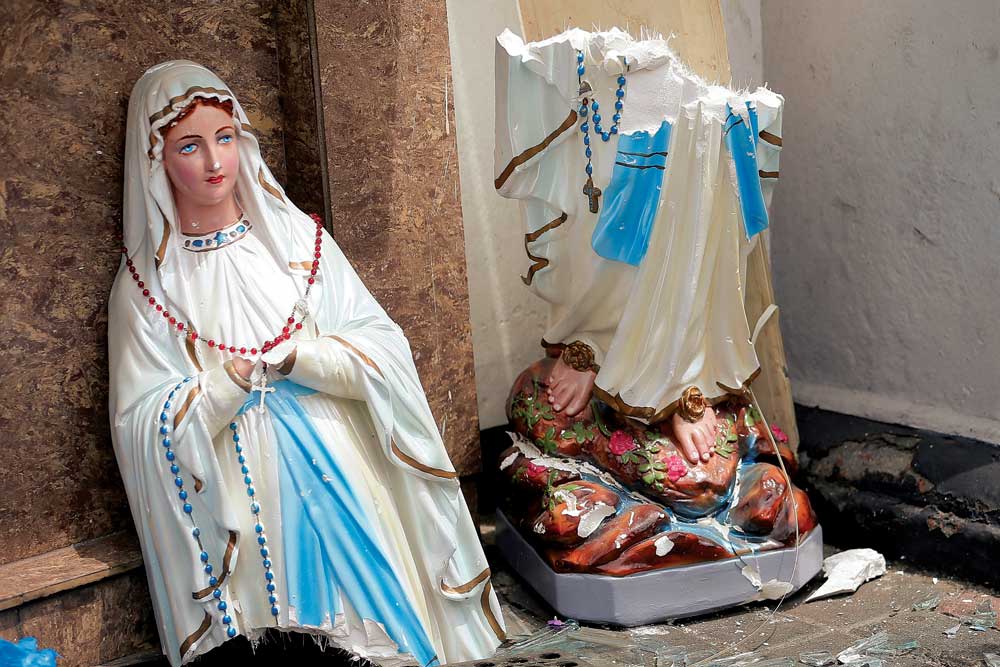 IN THE BEGINNING, IT WAS THE TORTURER’S WEAPON. SIMPLE AND ERGONOMIC, SUITED FOR A slow and painful death, as if it was designed by an earlier Leonardo da Vinci at short notice. The image still lingers, told and retold in sacred texts and popular culture, of the man climbing the summit of his own punishment, carrying that wooden implement on which he would be nailed. The cross would become the visual scaffolding of a faith, and over time, the abiding symbolism of a civilisation, no matter how liberal correctness derides the hurtful, monochromatic narratives of Western cultural heritage.

On Easter Sunday in Colombo and in its neighbourhood, the bloodstained crucifix in the ruins of the church was another reminder, more in tune with the times: the culture war has become bloodier, more explosive, and its territorial ambition has expanded. The rage against Christendom is not a misplaced hyperbole. It is a reality disputed only by multicultural militants in academia and op-ed pages. The same people who have found in the flames that enveloped Notre-Dame some kind of poetic justice.

The argument has reached Sri Lanka, where the toll has crossed 350 after multiple bomb blasts in churches and hotels. The ownership has been claimed, and we look at fresh pictures of piled up coffins and mass funerals, read about missed warnings and day-after resolutions, and seek refuge in the etymology of serendipity. That is what those who escape the bad pictures do in lieu of a memorial service.

Sri Lanka, the land that invented the suicide bomber, has become the victim of a different version of the bomb carrier. The original one, the Tamil separatist who struck more than three decades ago, was not Book-driven; he blew himself up as a way of homecoming, and he was secular. The Palestinian guerrilla borrowed from the Tamil Tiger. And soon the jihadi would perfect it with technical precision. The stealthy backpacker in Colombo on Easter Sunday has made the island the newly added tropical zone of global jihad.

The cross in the debris tells us what this conflict has come to be. A Christian adjective to civilisation rankles the culture moralists on the left. The growing response to White Terror, to some extent like the Hindu Terror, is a belatedly deployed whataboutery by the progressives. No one is overlooking the Breiviks and the shooter of Christchurch, but comparative studies of terror bring out ideological prejudices and liberal condescension. Radical Islamism and its extra-territorial terror plot have no equivalent Christian or, for that matter, Hindu alternatives. The 21st century Caliphate was launched in real time and place before it was destroyed.

The post-civil war idyll of Sri Lanka was shattered on Easter Sunday when suicide bombers of an Islamist group struck at multiple sites of churches and hotels in Colombo and elsewhere. The death toll has already crossed 350 and mass funerals have broken a nation’s heart

The eight suicide bombers in Sri Lanka were fighting the same war that the ISIS was destined to fail. Religious nihilism never built empires, and its conquests, in spite of the blood trail, were ephemeral. The misread Book provides heaven-inducing fantasies for those backpackers who have afterlives only as grainy images captured by security cameras—so much for a free passage to paradise. They never give up. An endless supply of enemies is a prerequisite for the preservation of the grievance—and the longing for a perfumed past. The grievance is as much a historical fallacy as the past is an exaggeration.

And the present? That is the jihadi’s biggest incomprehension, the source of his dejection and anger. The present is hell, and it’s not just the West, its cultural debauchery, that powers his rage. The degeneration of the Islamic world, its corrupt leadership, too, angers him. The living moment offers no cheer. He is caught between the distant past of glory and an imagined future. It is this existential misery that sets the Islamist rebel apart. And death is the aesthetics of his rebellion. The martyr who walks into the café, joins the Sunday mass, mingles with holidaymakers, or drives a lorry into the busiest street is, strangely, given a sympathetic hearing in the public court of liberals. Olivier Roy, the renowned French scholar of political Islam, has famously argued that what we see today is not the radicalisation of Islam but the Islamisation of radicalism. That denies the revolutionary a sociology of hate, and infuses him with the psychosis of the lone wolf. It separates the certainty of the Book from the jihad.

Maybe the interpreters are the misreaders. As Sam Harris, the American atheist and polemicist, says Islam is not a religion of peace at all—and the Islamist or the jihadist is not apologetic about it either. The liberals need a peaceful Islam that soothes their consciousness. When a Colombo happens, they are ready with a backstory of injustice and cruelty that makes the act of terror an inevitable reaction.

In the war on civilisation, the blood on the cross reminds us that the victim is still the same. The victim still overcomes—and survives vengeful gods and their volunteers with backpacks of death.

Prayer After Horror
Rising from the Ashes
A Sobering Moment