Steve Smith: ‘I am more of a lover than a fighter’

Steve Smith and Ben Stokes talk about their game and passion 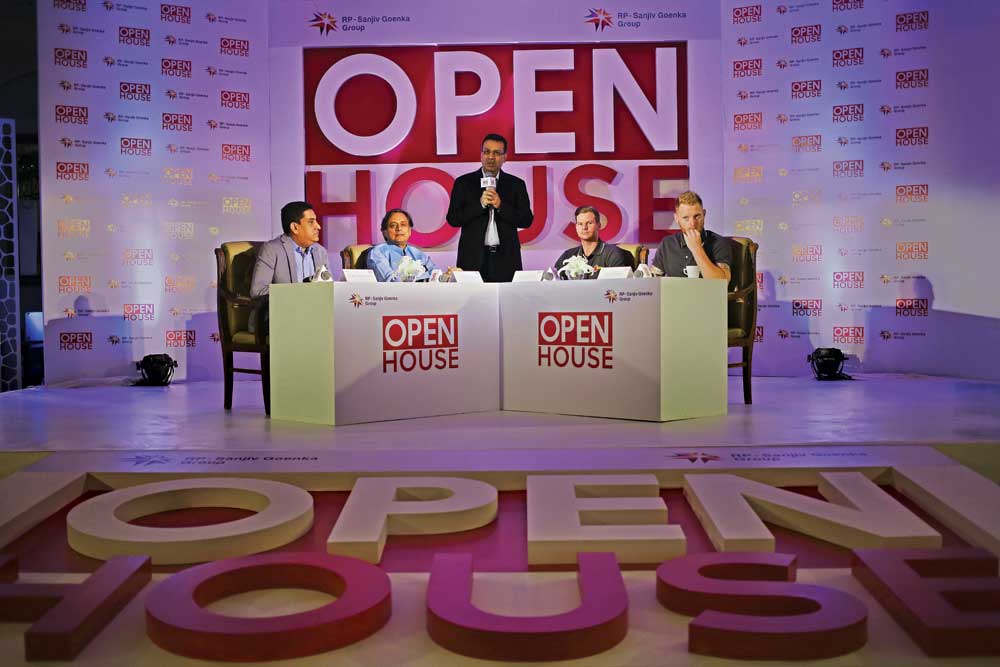 CONVERSATIONS CAN BE of three kinds. The worst are those that make one yearn for silence. A majority of discussions fall into that large middle area—informative, but not memorable. And the uncommon few are those conducted between equals. The second edition of Open House, which had cricketers Steve Smith of Australia and England’s Ben Stokes (top members of Rising Pune Supergiant in the IPL this season) in conversation with Shashi Tharoor and Boria Majumdar, falls into the last category.

Sanjiv Goenka, chairman of RP-Sanjiv Goenka Group and owner of Rising Pune Supergiant, inaugurated the event, which was held at the ITC Maurya, Delhi. Goenka provided an apt introduction, saying, “We have with us today Ben Stokes, inarguably the best all-rounder in the world today. And Steve Smith, an outstanding captain and one of the two, if not the best batsman, in the world today.” He playfully adds, “Being an Indian, we have to say one of the two.” (Virat Kohli and Steve Smith, always joined at the hip.)

Today, we know cricketers for their prowess on the field and the ticks that they inadvertently reveal. It is perhaps easier to access the island of Diego Garcia than the character of our favourite batsmen and bowlers. So it is only when they are amongst equals that they discard their helmets and shields (literal and metaphoric) and disclose who they really are. Tharoor, who has been a lifelong cricket fan and an expert of the game, is just the right person to tease the cricketers out of their reticence.

Tharoor seems to know their scorecards better than them, and has closely followed their ups and downs. The MP can even draw relevant comparisons from history and dig out nuggets from the past. Stokes—who could easily pass off as Thor, the hammer-wielding god of Norse mythology—talks about anger getting the better of him and issues of home and belonging. While the gentler and bijou Smith speaks about the change in his tracks from middling bowler to an ace batsman, a move he calls the “best decision” he has ever made.

The glory of sport is that it distils everything. Action and emotion are concentrated into a restricted space and limited time. Often, those emotions get the better of even the best. Stokes knows that all too well. Tharoor doesn’t lose an opportunity to remind him, recalling that Stokes had a “disagreement with a locker” and had to sit out of the ICC World T20 in 2014 in Bangladesh, nursing a sore wrist and a wounded ego. He also reminds Stokes that during his first England tour at the Under-19 level, he was sent home on disciplinary grounds.

“I was lucky to get my break as a spin bowler and you’re never really going to knock back an opportunity to wear the Baggy Green. I eventually let my bowling slip and concentrated on my batting, one of the best decisions that I made” – Steve Smith

But for Stokes, anger is not rage, it is passion. As he says, “The passion we feel as sportspersons sometimes comes out the wrong way. The locker incident is perhaps a case of that. When it doesn’t go well, like it did for a sustained period in the West Indies, emotions run high. It was an episode of stupidity and immaturity, I suppose. If I tell you that I wish I could go back and not do it, it would be a lie, for I have learnt from it. I learnt that if you take on a locker, the locker is going to win 100 per cent of the time. I’m never going to take on a locker anymore.”

When Stokes also learned to channel that excess energy into his game, perhaps in early 2016, he transcended from all-rounder with potential to a revelation. He smacked 258—the highest score by a number six batsman in Test history—against South Africa in Cape Town and there’s been no looking back since. Speaking about anger, Tharoor then turns to Smith and asks him “if he has ever been tempted to hit something or someone”, to which the Rising Pune Supergiant captain was quick to clarify that he is “more of a lover, than a fighter”. But ask any Indian cricket fan, and he or she will tell you that Smith has often brought the fight to India—scoring a bagful of hundreds against our bowling attack both home and away.

On the field, Smith is known as the buck inflicted by the fidgets. He takes pause not when the bowler runs up the pitch, but when the ball is mid-air. And then, in that split second, bat hits balls and beauty happens. On stage, Smith is a picture of poise. And says he isn’t even conscious of his twitches and jiggles on field. The only explanation he can provide is, “I’m not really sure where it comes from but it’s become a part of my routine.”

OPPONENTS SUDDENLY BECOME allies in the IPL. Accustomed to playing with their countrymen, cricketers must now look beyond nation and only at team. So with Stokes and Smith—members of nations locked in the oldest (140 years and counting) and most bitter rivalry in cricket (the Ashes)—now happy to share a dressing room, strategies, secrets and perhaps even a beer together.

“The passion we feel as sportspersons sometimes comes out the wrong way. The locker incident is perhaps a case of that. I learnt that if you take on a locker, the locker is going to win 100 per cent of the time. I’m never going to take on a locker anymore” – Ben Stokes

Majumdar, author of the recent book A History of Indian Sport through 100 Artefacts, asks Stokes about being teammates with Smith in Rising Pune Supergiant and whether he is studying Smith’s game to use it against him later. Stokes, for a brief moment, loses his train of thought, and says, “You put me on the spot. When we play against each other for our countries, we are both going to try to win, obviously. I haven’t taken this time to study Steve, no.”

For the players, playing in the IPL also provides a chance to soak in the Indian culture. Stokes says that playing cricket here means “more selfies” and realising that the game truly is a religion. Smith’s reply to the same question was unintentionally funny. “I love playing here in India. It’s a fantastic place to play cricket. Very similar to what Ben said, the fans and the support you get from the Indian public, at games or in hotel rooms,” he says, before quickly correcting himself. “I mean hotel foyers. Hotel foyers.”

Leagues complicate the issue of country and nationality. It is a crisis Stokes knows all too well. He was born in Christchurch, New Zealand, but plays for Durham and England. A young Stokes moved from New Zealand to England because of his dad’s job as a rugby coach. Tharoor asks him, “You are a citizen of New Zealand. Your father played rugby for New Zealand. And then you, as an England player, are hammering New Zealand for 92 and a 101 in a Test match. How did you feel?”

A circumspect Stokes replies, “I moved to England with my mum and dad when I was 12. By that time I had started school and had begun playing junior cricket for Durham. Once I made all the transitions through the age group sides in England, I was like ‘Yeah okay, I want to play for this country’. It was an easy decision to make. My mum often tells me to embrace my roots but she knows I’m English now.”

In utopia, sports and politics are not connected. But anyone who has seen an India-Pakistan match knows that is not the case. But as Tharoor moves from moderator to commentator, he says, “I’ve always been a little alarmed when cricket becomes more than a game. It’s all very well to have an edge to your rivalry, but with India-Pakistan that edge is too often about other things. Right now, political relations are extremely tense… But I don’t think we should put the onus on the cricket team. I don’t think it is ever any more than a match of cricket. And I believe it is wrong when people try to weigh down the cricket with the baggage of all that is happening. If tomorrow India loses to Pakistan in a cricket match, it doesn’t mean we’ve somehow suffered a geo-political setback on the subcontinent.”

These days, cricket often falls victim to jingoism. The game loses out in the noise. As Tharoor says, a contest between bat and ball becomes a matter of nation and state. On the dais, players step back and introspect on their lives, and we get the best conversations of them all—a dialogue between equals.