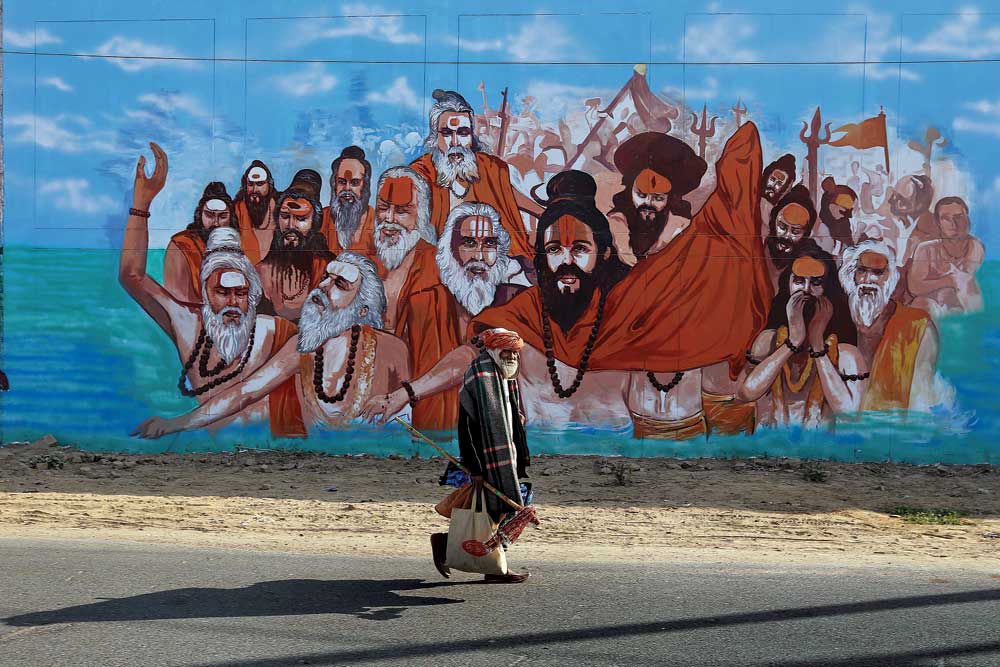 IN TODAY’S PRAYAGRAJ,A CITY which was called Allahabad till October, the navigation pointer on Google Maps is like a dog chasing its own tail. It is not due to some technological glitch, but because the entire city has been dug up in the run-up to the Ardh- Kumbh Mela to be held at the Sangam here. Beginning mid-January, this time it is being touted as the Kumbh—an event which takes place every 12 years instead of six, like the Ardh-Kumbh. Several seers have objected to this renaming, but the government has gone ahead with it anyway. In its response to objections, the state administration has said that ‘ardh’ (half) is a concept alien to Sanatan Dharma.

For the ongoing beautification project, thousands of houses have been fully or partially demolished. Many heritage structures and old temples are gone as well to enable the expansion of roads. Old trees, some of them hundreds of years old, have also been uprooted. During the day, bulldozers can be seen at several spots bringing structures down and clearing the rubble. The whole city is engulfed in a thick pall of dust. In the morning, when there is little traffic on the roads, the city looks like post-bombing Aleppo. All over the city, murals depicting stories from Hindu scriptures have been painted on walls.

Allahabad’s genteel residents, peeved at the renaming of the city, have found a novel way to register their protest. Speaking to visitors, they quip that Allahabad ‘khuda’ hai (‘khuda’ literally means ‘dug up’, but is also an allusion to the city’s Islamic past).

Many, however, say the development work was long overdue. In the Khusro Bagh area, where a Mughal-era gateway is being demolished along with rows of houses on both sides, a shopkeeper says residents here have no reason to complain.“Crossing this point was a nightmare,” he says, though expressing sadness over the dismantling of a small temple nearby.

Ramesh Yadav, a journalist who works for a national Hindi daily, says that Allahabadis have been used to doing things slowly. Ideally, he says, this reconstruction should have been done a decade ago, as the city had been falling apart, but it’s hard to account for the lethargy of people here. “The Allahabadi lives in the past. You speak to an Allahabadi today, he will tell you that his ancestors consumed a lot of ghee and that that strength is still in his wrists,” he says.

This slowness is now face-to-face with a speed that the city’s residents are still adjusting to. It is a strange sight amidst this speedy dismantling of old ways, but TV monitors put up by the administration at several intersections in the city are running a film on loop on the Kumbh. No matter where one turns, one comes across images of Prime Minister Narendra Modi and Chief Minister Yogi Adityanath—they are on billboards and flex sheets, and on boards displaying details of construction work planned for a particular stretch.

The publicity blitzkrieg becomes more intense as one enters the Mela venue at the Sangam. As work goes ahead on a war footing, posters with the slogan of ‘Divya Kumbh, Bhavya Kumbh’ (Divine Kumbh, Grand Kumbh) have been put up everywhere. One prominent board, featuring both Modi and Yogi, claims that Rs 4,048 crore will be spent on 366 projects for the Mela and overall development of Prayagraj. On December 16th, Modi came to the city to review the preparations and inaugurated several schemes. He also performed an aarti at the Sangam site.

A day earlier, more than 70 heads of missions based in Delhi were flown here by a special flight to see the spectacle. They arrived at the Sangam and were shown a film over breakfast on the Kumbh that none of them paid much attention to. Then there was a flag hoisting ceremony, after which they had lunch and were flown back.

An estimated 120 million pilgrims will come to Prayagraj during the Kumbh Mela. Thirty million among them are expected to be there on a single day on February 4th, on Mauni Amawasya, considered an auspicious day for a dip at the Sangam.

During the Mela, between January and March, the state government has banned all weddings in the city. This has led to a mad scramble for nuptials. Every evening, the city witnesses multiple marriage processions, some of them going past uprooted tree stumps and small roadside hearths made by labourers to cook their food. The light from petromax lanterns carried by the poor along with these processions sometimes highlights the layer of dust in the air, prompting guests to cover their noses with handkerchiefs—only to soon be put away for taking selfies.

IN THE MIND OF THE thinking Allahabadi, three Allahabads have always existed at the same time. One is Prayag, the ancient Hindu site of pilgrimage at the confluence of Ganga and Yamuna and the invisible Saraswati. Then there is the main city, referred to as the ‘shehar’—the medieval town where Mughal Emperor Akbar built a fort in 1583. It is this city that the British expanded, turning it into the capital of the North-Western Provinces. And then there is Civil Lines, which the British created as their residential area, and which after they left was occupied by people who were beneficiaries of English education and who thought of themselves as belonging to a world community of sorts.

Pilgrims are taken by emotion once they reach the Sangam. They jump into the water, taking a dip, chanting old hymns, offering prayers to their ancestors, taking handfuls of water and partaking of it

Many of them have left Allahabad now. But some remain. Like Alok Rai, writer, academic and the eminent Hindi writer Premchand’s grandson. He lives in a house his father built in the early 60s. It was a time when Allahabad was at the centre of the Hindi movement. It was home to writers liken Suryakant Tripathi ‘Nirala’, Mahadevi Verma, Dharmvir Bharati, Firaq Gorakhpuri and Harivansh Rai Bachchan.

As a student at Allahabad University, Rai remembers the staging of plays by Harold Pinter and others. After retiring from Delhi University, where he taught English, Rai returned home. “I went to other places, but came back here. This has been a base for 60 years,” Rai says. Today, he is wary of builders who come knocking at his gates, offering him a price for his bungalow. They want to dismantle it and build apartments.

Rai is not prone to ‘Allahabadi nostalgia’. The reality of Allahabad, he says, is tawdry. “But there was a cosmopolitan confidence here, which has now been taken over by—there is no other name for it in my mind—regression,” he says. To his mind this transformation, however, is democratic. “I may not agree with it, but that does not mean I don’t understand it,” he says.

Rai says that today when he steps out of his gate, he feels like a stranger in the city he grew up. He is aware of the ‘destruction’ outside, but he says he has not gone out to witness it.

Like Rai, Neelam Saran also considers Allahabad home. She was born in a Nehruvian environment, eight years after Independence. “This place used to be like an English country club, loaded with British humour,” she reminisces.

Saran was schooled in a local convent, run by Catholic nuns who had sought refuge in the city from Germany. “They were European and made us adhere to their idea of civilisation,” she says. After the Babri Masjid demolition in 1992, she remembers a neighbour clanging a thaali on his roof in celebration, but she did not think too much of it. “The larger majority in Allahabad remained indifferent to it,” she says. But, today, she says she feels an aggression in the city which she as an old Allahabadi cannot identify with or endorse. All the digging-up and disregard for heritage, she says, is part of this new aggression.

But unlike Rai, Saran remains hopeful. “I have my hopes pinned on the fence sitters. This aggression is not something this city can endure for long,” she says.

In her seminal work on the Kumbh Mela, the academic Kama Maclean writes of how people from all over India, after the pilgrimage, would return home where ‘their stories were eagerly heard by those who had stayed behind’. She writes that the British were aware of it and ‘knew they needed to influence it so that the messages carried back to the villages positively represented British rule’.

PERHAPS MODI AND Yogi have something similar in mind now. But on the face of it, the pilgrims who have started to arrive hardly pay attention to the banners and posters and carboard cut-outs. Most of them are from villages and small towns: old and young, healthy and infirm, firm and bent-backed, clear and cataract-eyed. They arrive in buses and trains, making gruelling journeys through India’s ever- changing landscape. They often carry a month’s ration with them—of rice or flour, and lentils. For them, suffering is very much a part of the old Hindu way of performing a pilgrimage.

They are taken by emotion once they reach the Sangam. They jump into the water, taking a dip, chanting old hymns, offering prayers to their ancestors, taking handfuls of water and partaking of it. They move in groups—of their community, of their villages and towns. But once they are near the holy waters, all notions of caste and community are washed over by the overwhelming emotion of being in touch with the divine.

“For the last 30 years, I have observed that as the Ganga dries up slowly, market forces are increasing,” says Swapnil Shrivastava, an activist and mathematician who was born in Allahabad. He speaks of seers who after the obligatory photo op of a dip at the Sangam take a bath immediately afterwards in fresh water for fear of infection from the polluted waters. Or of those who do their aachman with mineral water. But he says that ultimately the poor man and his faith will prevail. “They are the ones with cracked heels who eat once a day and those you will see humming Tulsi’s chaupais while carrying on with their lives,” he says.

While this remains an image which many believe is the reason India has survived as a civilisation, other things, not life-affirming at all, have prevailed as well. Shrivastava speaks of visiting Karvadi village, about 35 km from the main city, home to the extremely poor Musahar community. In November, a young pregnant woman was taken to a nearby hospital with labour pains. All her family had, says Shrivastava, was Rs 1,000. The family told Shrivastava that the hospital took this money and then could not deliver the baby. So they asked her to be taken back. At night, the community women tried to deliver the infant themselves. Both the baby and mother died.

Shrivastava was told of a young boy in another village who was forced as a bonded labourer to push light and decoration trolleys in marriage processions, the kind seen on the streets of Prayagraj today, the sort that took place in Allahabad earlier.

For the deceased woman and the trolley boy, neither Nehruvian socialism nor Modi’s ‘Vikas’ has proven saviour. 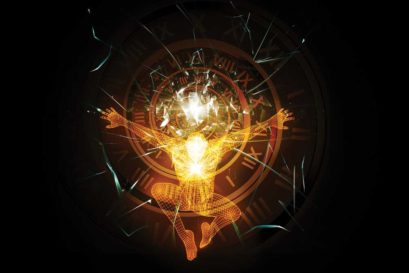 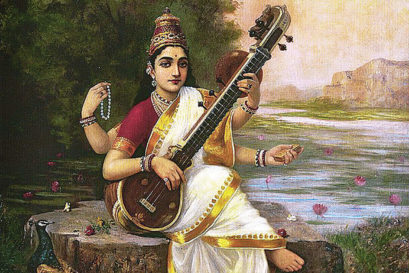 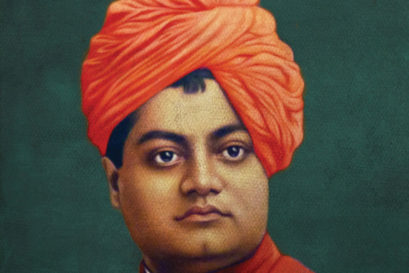 Swami of the mind