‘I Just Wanted To Sing. People Gave Me the Freedom. India Does That’ 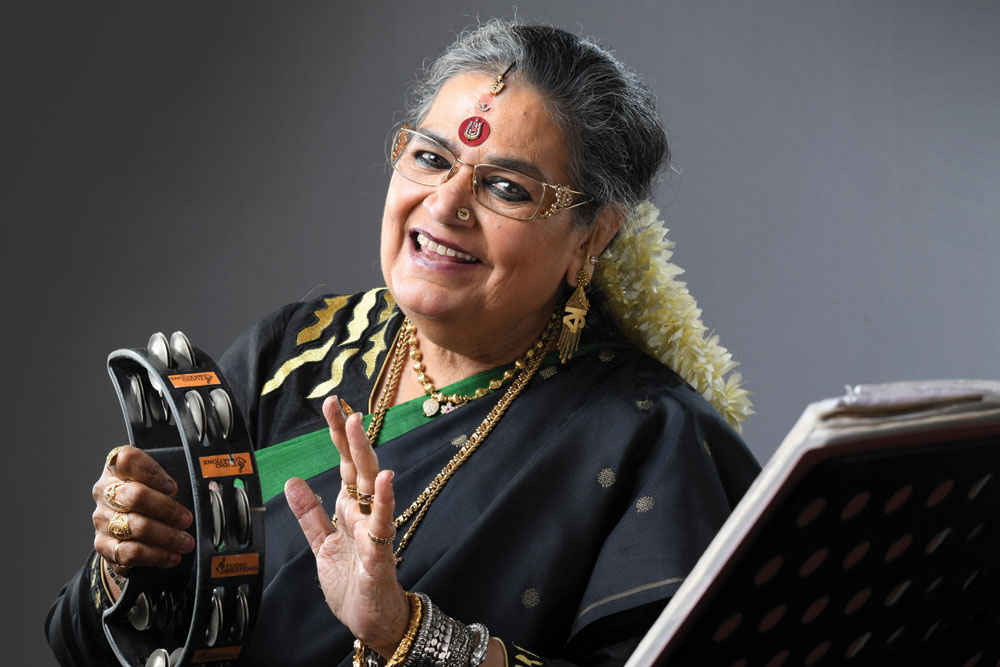 
FOR USHA UTHUP, BORN ON November 8, 1947, the earliest memory of freedom was in 1962, during the Chinese aggression. She was the leader of a group in her school, Convent of Jesus and Mary in Byculla, Bombay, put in charge of mak­ing care packages for Indian soldiers on the border. She still remembers the things they packed: woollen socks, blankets, extra large sweaters, glu­cose, toiletries, vitamin pills. There was another consignment of shoes. “I had never felt so much love for my country and so acutely,” she recalls. “Even now if I am sitting alone at home, I stand up for the national anthem,” she says.

Uthup is one of the most recognisable voices in the country, whether it is singing iconic Bollywood songs like ‘Hari Om Hari’ from the forgettable Pyaara Dushman (1980) or ‘Shaan Se’ from the cult film, Shaan (1980), or reinterpreting Donna Summer’s ‘I Feel Love’ and Tina Charles’ ‘Dance Little Lady Dance’. But she is more than that. She has always symbolised India’s diversity, straddling its many contradictions. A Tamilian Brahmin by birth, she sang sensuous songs in smoky nightclubs in the swinging sixties and sev­enties, happily clad in her Kanjeevarams, with flow­ers in her hair, without a trace of self-consciousness. She ascribes it to her multicultural upbringing. She would say the Lord’s prayer at the chapel in school. They lived in a large 1927 government bungalow in Byculla’s Love Lane. Her neighbours, the Pathans, were Muslim, she would of­fer namaz with them, keep a fast during Ramzan, and learn to stitch the salwar kameez. At home, there was a designated puja room. “In school, we never knew of any difference in religion,” she says. “Of course, we knew Shameem and Jameela were Muslims, Patsy was Christian and Pushpa was Hindu, but it didn’t affect us. Our lunch dabbas reflected that variety.”

They didn’t know there were different parts to Mumbai demarcated for different communities, whether it was Dadar to Parel, or Byculla to Mohammed Ali Road or Crawford Market to Colaba. Bandra was the boondocks, she remembers. Her father Vaidyanath Someshwar Sami was in the city police, known for his honesty and no-nonsense ways.

His valour left a deep impression on the young Uthup, one of his six children. “We respected the little Tricolours in our books and were traumatised if they fell to the floor. The nation is talking of “Har Ghar Tiranga” today, but the flag was always dear to us. It belonged to each and every one of us. Every Republic Day and Independence Day, they would hoist it at home,” she recalls. She also remembers printing sarees in the Tricolour after she won a Padma Shri in 2011. “I want to pass this feeling on to our children and their children. The tiranga belongs to us all,” she says.

“I would sing ‘Rambha ho ho’ (Armaan, 1981), or ‘Aha nache nache’ (Disco Dancer, 1982), and wear my silk saree and my giant bindi, and people accepted me for who I am,” she says. No matter that her hus­ky, big-throated voice was usually picturised on the “bad girls”. The heroines were always supposed to be virginal, therefore the high octave, eternally girlish voice predominantly of Lata Mangesh­kar. Her mother would sing while cooking—Hindi songs, Tamil songs, even Bangla songs—perhaps a result of her maternal home in Chennai being full of the fine arts. “I wanted to sing, I wanted to communicate. It could be ‘Listen to the pouring rain’ (Jose Feliciano), or ‘Jambalaya’ (Carpen­ters), I just wanted to sing. People gave me the freedom. India does that to you,” she adds.

“This is the India I grew up in,” she says. It was the India of Bata shoes and Tata airlines, of Duckback raincoats and gumboots, which lasted for three seasons and had to be folded with powder every time before being put away. It was an India where Mahatma Gandhi was still an icon, not merely a face on a currency note. Uthup’s connection to the Mahatma goes back to her fa­ther, who was responsible for the Mahatma’s bandobast whenever he would travel to Mumbai. Uthup was devoted to her father whose po­lice medals she polished with great dedication.

Fast forward to her visit to South Africa when Nelson Mandela was freed from Robben Island in 1990 and she was asked to visit Phoenix, the Mahatma’s first settlement in South Africa. “I would be invited to sing all over the country and whenever I could, I would visit either the Sabarmati Ashram or the Mahatma’s birthplace in Porbandar. But when I went to Phoenix, it was heartbreaking. There was nothing of Gandhiji left there. I remember coming back and touching Mandela’s feet and telling him that I was doing so because he was my elder. And he blessed me and asked me what I wanted. I said I wanted to meet Mama Africa, the singer-songwriter civil rights activist Miriam Makeba. We met the next day and performed ‘Pata Pata’ together. I still get goosebumps thinking of that moment,” says Uthup. She still gets angry if she sees any disrespect to the Mahatma or any statue that doesn’t depict him rightly.

Named Usha by her grandmother Dharmambal, aka Madras Patti Ma, because her smile was “like a beautiful morning”, Uthup was always different, a carefree tomboyish girl who was always with toy spindles and flying kites. As Vikas Kumar Jha writes in The Queen of Indian Pop, her biography, she played cricket, badmin­ton, hu-tu-tu, gilli-danda, seven tiles and police-thief, among others. And when she was bored of playing, she would be found reading comic books.


In school, we never knew of any difference in religion. Of course, we knew Shameem and Jameela were Muslims, Patsy was Christian and Pushpa was Hindu, but it didn’t affect us. Our lunch dabbas reflected that variety, says Usha Uthup

Her life has not been easy. Married at the age of 18 while she was still studying at Sir JJ School of Art, she first realised she was cut out for music when the world’s most famous gospel singer, Mahalia Jackson, visited Bombay for a show organised by The American Center, Voice of America and the US Information Ser­vice. Impressed by the young Uthup’s rendition of her famous song ‘It Don’t Cost Very Much’ for her, Jackson made her sing on stage with her. All of Uthup’s sisters—Indira, Uma and the young­est Maya—loved music. Indira and Uma during the 1950s made a name for themselves in pop music as the “The Sami Sisters”. But Uthup was always told that she sounded like Dara Singh. It was only after Jackson’s intervention that she acquired confidence. She mastered her unique voice, even fought a court battle against the West Bengal government at one stage for spreading “decadent culture”, becoming India’s first pop singer.

A blue inland letter from the owner of the Park Street restau­rant Trincas in Kolkata invited her to sing in 1969. She never left. It was the city where she found love after a frigid marriage of five years to Ramu Iyer. It was the city where she got to be called “Didi”. It was the city which gave her the “k” in her bindi. Her second hus­band fell deeply in love with her while listening to her at Trincas and told Ramu Iyer in a dramatic interaction that he wanted to marry his wife. Jani Chacko Uthup and she were married in 1970 and they have been together since.

Jha explains her appeal well in The Queen of Indian Pop: “The 1970s was a decade of revolt globally. It was the same decade when the student movement took place in India. Indira Gandhi announced the Emergency and lost the next election. This was the time when Amitabh Bachchan was emerging on the Indian silver screen as the angry young man. And this was the time when Usha, the ‘pop queen’ of India, had caught the imagination of the young mind, heartily breaking traditions. Usha was on time. She had promptly heard the heartbeat of the decade. Usha understood the blinkered era of the previous generation that blindly fancied slow, tearful songs. The new generation was in need of vigorous gai­ety. Usha realized that her deep voice, once considered a weakness, suited the changing times. It became clear to her that it was time to transgress the boundaries. The evolving time needed euphoria, not tears. She was simply the singer of joy and the first pop singer in a land of Indian classical traditions. She surpassed the conven­tional barriers, awakening a hurricane of joy and leaving the young generation mesmerized. It was also a new message to the women of that era that she won’t remain silent anymore, helplessly shed­ding tears. The essence of a woman is happiness! Every possible happiness! Usha, a south Indian belonged to a community which has been devotees and admirers of Carnatic music. English songs weren’t treated with respect. Clearly, Usha’s path was not easy. The world of English songs was very limited in those days.”

But her spirit has been as indomitable as India’s. She has sung with partial paralysis that has threatened to cripple her, she has sung when denied her place in the sun in Bollywood because of politics, and she has sung while her son was diagnosed with kid­ney failure. She can sing in 22 languages, across styles, and eras. She is often asked what she is: an ethnic singer? A jazz singer? A pop singer? Her response is always: “I am a people’s singer. I am totally a gypsy. I am a nomad of music.”

For Uthup, India means freedom, independence, patriotism, love, dignity and pride. It is these sterling values that she imbibed in school and through her father. “At every proclamation, every special assembly, every prize giving, holding the flag was so important for me,” she says.

She and her husband are die hard romantics. They share a love for stationery, the Mahatma and the nation. “He’s the son of a brigadier in the Army and I am the daughter of a police officer,” she says. For them, India is always first.