He Kept You at Arm’s Length

But you could always trust Satyajit Ray to say what he meant. His opinions were sharp, to the point 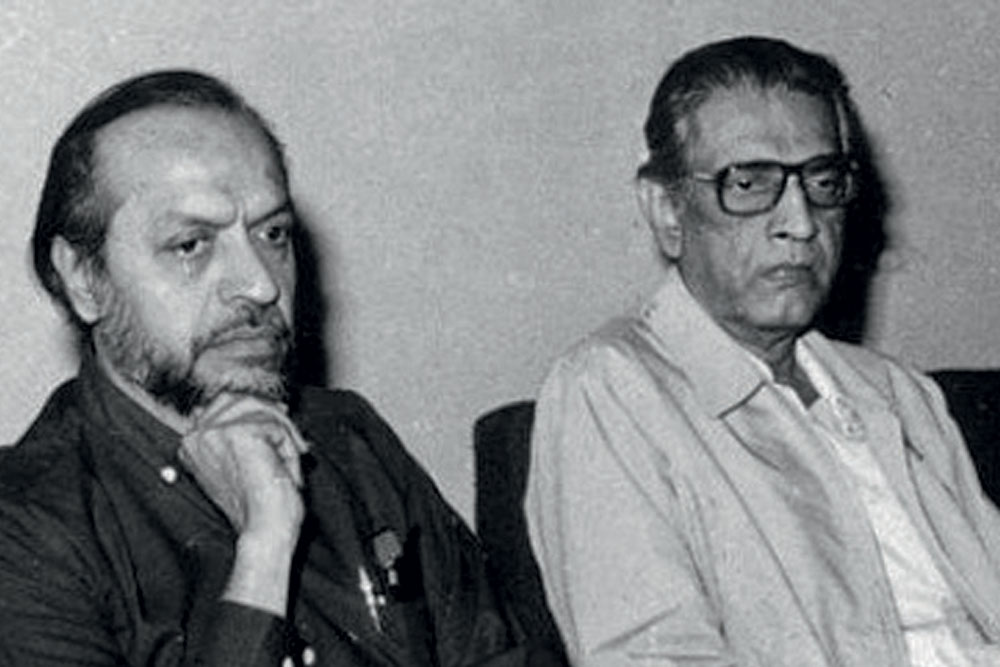 Shyam Benegal and Satyajit Ray in the late 1980s


The first time I saw Pather Panchali was in 1956 in Calcutta. I had gone there to represent my college in the national swimming championships and my uncle, a commercial artist, told me to watch this new movie by a young filmmaker called Satyajit Ray. I went to the theatre one day and emerged only after four shows. Over the next few days I saw it a dozen times. I came third in the championship but my path as a filmmaker lay certain in front of me. I was smitten. It said something to me and was hugely inspiring. I had always wanted to be a filmmaker.

With Pather Panchali I made up my mind.

When I became a filmmaker, I wrote to Ray and asked him to watch my first film, Ankur (1974). He did and after doing so asked me what I wanted to achieve with the film. I told him I wanted it to run at Eros Cinema in Bombay for one weekend. He patted me on the back and told me it would run for several weekends, and it did.

It became a practice for me thereafter to seek his opinion on my films. It was very difficult to get an honest opinion on one’s work. The feedback from friends would be minimal because they didn’t say much or, even if they did, they didn’t want to upset you. The relationship with one’s contemporaries was always problematic. But you could always trust Satyajit Ray to say what he meant. His opinions were sharp, to the point. He didn’t theorise too much though. At that time the Film and Television Institute of India had come up in Pune and people had become exceedingly ideological about their cinema. Ray was free of all that kind of dogma. He believed there were many different ways of telling a story I shot a documentary on him for Doordarshan in 1981. It took me a year-and-a-half, shooting between Bombay and Calcutta. He was busy shooting Ghare Baire and I was busy with Arohan, a film that was meant to underline the role of the village organisations in the development model adopted in West Bengal by the Left Front government. A lot of directors don’t like intrusions on the set but Ray didn’t mind that as long as we didn’t get in the way. We could only shoot the documentary in snatches but it was worth it eventually to discover the kind of person he was, the kind of creative powerhouse he was. He was a filmmaker, a graphic artist, a composer, he designed typefaces, he even did designed sets. He was a one-man force. Of course, he did have some brilliant people working with him too—two of them worked with me later, his cameraman Subrata Mitra and his production designer Bansi Chandragupta.

He was very patient with me through the making of the documentary even though these were questions he had probably answered many times because he had been interviewed so many times. He never snapped at me or spoke condescendingly to me. He would always speak to you from where he stood, from what his position was. A lot of artists don’t like to do that; they don’t like to put themselves in a particular spot so they can be attacked. But he was always conscious of what anyone said about his work which is one reason he continued making films to the very end. He just kept going.

Ray was a private man; he kept you at arm’s length. He had very few intimates though he had lots of acquaintances. I visited him on many occasions even after I completed the documentary; I remember meeting him for tea once at his home. I was told I shouldn’t waste his time so I went sharp at 5 and was served lovely Makaibari tea from a particular tea garden that he favoured. We talked and talked about cinema, life, everything and when I looked up it was 9PM. His wife was very cross because I had made him late for dinner.

There were two ways in which Ray had consumed cinema in his early life. He got to know world cinema when he set up the first Indian film society with film critic Chidananda Dasgupta in 1947. The second was in 1950, when he was working in London as a graphic artist for DJ Keymer at their headquarters. He would spend a lot of time at the British Film Institute, watching films—99 films in three months to be precise—from all over the world. That was his cinema education. I still believe there is no better way to learn cinema than that. Or to be critical. You have to develop your own cinematic voice, discover how it can become a medium for creativity and ideas.

Ray was known to the world for what Indian cinema was capable of doing. His work said something about the Indian aesthetic separate from the idea of popular cinema. If the Nouvelle Vague represented French cinema at its best and Akira Kurosawa represented Japanese cinema at its finest, Ray embodied Indian cinema across the globe.