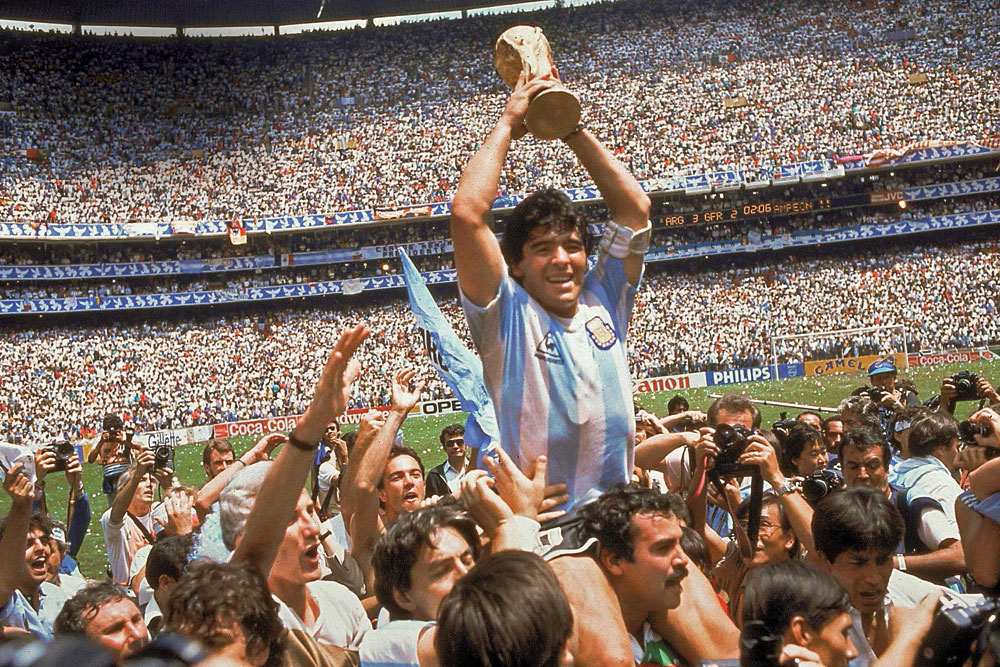 Diego Maradona with the World Cup trophy after Argentina beat West Germany in the final at the Azteca stadium in Mexico City, June 29, 1986 (Photo: AP)


THE TOURISTS CROUCH BY THE GRASS, SMILING. Gravel groans underfoot. A symphony of mobile phone clicks rips the air. A Costa Rican man turns to the guide Saul and asks in Spanish, “Was it here?” “Sí,” Saul replies, waving in front of him. “Right here.” Here is the north-facing goalpost of the Estadio Azteca in Mexico City. It is La Mano de Dios. The Hand of God: Diego Maradona’s finger-flecked goal in the 51st minute of the 1986 World Cup quarterfinal. Un tanto polémico, as Saul describes it, kind of controversial.

A Uruguayan later sidles up next to Saul, “¿Y el gol del siglo?” he asks. The goal of the century? That too, happened here. Four minutes after the contested first goal by hand, the Argentina cap­tain needed just his feet. In what was voted the greatest goal of the 1900s, he took on five England players, scattered the defence, and with a cunning, brilliant 60-yard run, made it 2:0 for Argentina.

Saul, a fast-talking, ear-ringed Spanish-language tour guide, routinely fields the same questions every day: Where did those freeze-frame moments of football history unfold? What marks of Maradona does the stadium still hold? This morning is pecu­liar, he says, a tour somewhat raro: there is not a single Argentine among us. Just days earlier, during Maradona’s birthday week there had been a glut. “For Argentineans,” he says, “This is like a cathedral”.

Religious fervour is brined in the bones of the Azteca, an 87,000-seater stadium named for the Mesoamerican pre-Hispanic civilisation that once ruled here. It has seen two World Cups, sev­eral demigods (Pelé, Platini), one man of god (Pope John Paul II), and one hand of god.

On that June day when Maradona struck a brace, the senior Argentinean journalist Ezequiel Fernández Moores was inside the stadium, seated high above the action. Immediately after the first goal, he knew the mano, or hand, had been in play. But there was little time to dwell on it—four minutes later Maradona gave the world the gol del siglo (goal of the century). “How curious that the person who struck the contested, unfair goal had now struck this sensational goal,” he recounts. “I believe he did not want to be remembered in history as simply the author of an unfair goal so just minutes later he gifted us the greatest work of the finest artist in a World Cup.”

Within 10 years of Maradona sacralising the Azteca with his golden touch, it turned into a site for the faithful. “I could not miss the opportunity to see the stadium,” says Andrés Burgo, a journalist who vacationed in Mexico in 1995 as a 21-year-old. On that holiday, he had stepped on to the ‘sacred’ turf and did what thousands had done before him: mimic those two Maradona mo­ments and memorialise them in his photo album. He went on to write El partido, a book about that very Argentina-England match.


Ezequiel, an atheist, grasps at religion to describe what Burgo and others have done. “Just as there are Argentines who join ‘El Camino de Santiago’ (the pilgrimage from the Pyrenees to the Compostela Cathedral in Spain), there are others who, when they step on the Azteca, do ‘El Camino de Diego’,” he says. The Way of Diego.

Today, tourists can no longer undertake the ersatz theatrics of ball-head-hand-goal on the Azteca pitch. Saul gently warns careless photo-seekers off the grass.

But the Azteca remains inseparable from the Argentine—as a scene of his genius (or crime, depending on whom you ask).

At the start, Saul takes us through the commemorative plaques girdling the front of the stadium. One for the first goal here (Arlindo dos Santa Cruz, 1966), one for the match of the century (Italy-West Germany, 1970), one for the golden jubilee (2016) and one of course, for Maradona’s goal of the century. One honours a special distinction: the only stadium to have hosted two World Cup finals (1970, 1986). “The biggest international footballers [Pelé and Maradona] both crowned world champions here in this stadium Azteca,” says Saul. “Speaking of history, be­lieve me, it will be difficult to compete with this.”

We stand in the shade of a gigantic mural that has been erected opposite the plaques. It’s a colourful montage of Maradonas: smil­ing as he clasps the cup; sliding one past the keeper; effulgent in an oversized sombrero. This installation from the Argentine embassy arrived last year to mark 35 years of the World Cup win.

I ask Saul about the Mexican Wave, the febrile rhythmic cheer­ing now the staple of stadium sports everywhere. It was not born here, he says, but it was created by Mexicans. Potted histories on the internet say it was first seen in the US, beginning in the 1970s. But most agree that Mexico 86 is where the wave was perfected, or at least repeated most memorably and exported outside North America. So, the ola became Mexicana.

The final plaque outside is a thank-you to the Azteca for host­ing—the 1986 tournament was never supposed to be in Mexico; Colombia was initially designated as the host. When a series of unfortunate events followed in that country, the venue had to be shifted. Mexico put up its mano. They had experience—they had hosted a smooth show in 1970, when Brazil and Pelé hoisted the trophy. In May 1983, Mexico was picked. But in September 1985, with just eight months to go before the first kick-off, Mexico City suffered a monstrous 8.0 earthquake. At least 5,000 people died, two aftershocks followed and the city was in shambles. Would the World Cup have to move again? When that first whistle blew, on May 31, and Italy took on Bulgaria inside the Azteca for the opener, it was no small miracle. From there the miracles multi­plied. Eight more matches were played here, including the final where Maradona led Argentina to victory.

But this giant bowl perched on the city’s edge has a history that predates Don Diego. It was once so far out of Distrito Federal as the city was widely known, the neighbourhood was surrounded by water. (The legendary Frida Kahlo grew up near here.) It was also a site of a lava rockbed from an ancient volcanic eruption that had to be blasted with dynamite before building could begin. Black basalt still juts out from one portion outside the stadium.

“Vamos, I will paint you a scene,” says Faustino Reyes, a genial 63-year-old jersey salesman I later meet. He shuffles out of his tarpaulin-covered tienda outside the gate, to narrate to me the intertwined story of the Azteca and his own life.

Qatar 2022 is the first World Cup since Maradona’s death. But so much keeps changing at the Azteca—it has fewer seats, more ticket boxes, grass that is un poco diferente. But for Argentines, a new paint job at the Vatican makes it no less special

He points all around him. Then in a grave, Michael Caine-nar­rator voice, he begins: “Before, everything was deserted,” he says. “There was water everywhere.” That, and mountains of rocks. Faustino saw it emerge in the early 1960s, concrete plumes soar­ing out of nothing. His mother worked the stands inside from 1966, selling tacos and tortas, eight-year-old Faustino trailing her. At 12, he watched Pelé. He grew up and worked as an electrician at the Azteca. He saw one part of the stadium fracture in the 1985 earthquake; he smelt fear stalk the neighbourhood.

And a year later, he watched from the stands as Argentina dismantled every other team on its way to glory. When Mara­dona struck that goal, the one un tanto polémico, Faustino was there, clutching a cheap 100-odd peso ticket. He chuckles wryly. “¡Un tramposo!” A cheat. And then when Argentina won the final against West Germany 3:2, his skin curled, his body vibrated con emocion.

The Azteca can do that to you. It is a wave, a stage, an altar, a song. Every Argentine I speak to points me to the singer Andrés Calamaro’s ‘Estadio Azteca’, where he croons in awe, that he “was struck seeing the giant”.

At least one person I meet on the tour is struck too, after com­ing out of the Azteca. José Manuel Pelcastra, a middle-aged Mexi­can stops Saul and points to a photo on his phone. It’s a bust of Maradona, his left fingers kissing a suspended orb, which José saw here on his first visit 10 years ago, a statue he describes as “ico­nico”, “incredible”. But today it is nowhere to be seen. Saul shrugs, he simply has no idea where it is now. At some point during renovations it was shifted out elsewhere. But he assures me it has not been lost.

Qatar 2022 is the first World Cup since Maradona’s death. But so much keeps changing at the Az­teca—it has fewer seats, more ticket boxes, grass that is un poco diferente. But for Argentines, a new paint job at the Vatican makes it no less special. “I don’t know Mexico,” José Arbusto, a 23-year-old from Buenos Aires lat­er tells me. “But we Argentines know the stories of Maradona’s goals in 1986 as if it were a religious prayer. The Azteca Stadium was the main stage… and remained in the collective memory of the country. So, even without knowing what colour it is, what shape it is, how many people enter, why it is called what it is, for us it is relevant.”