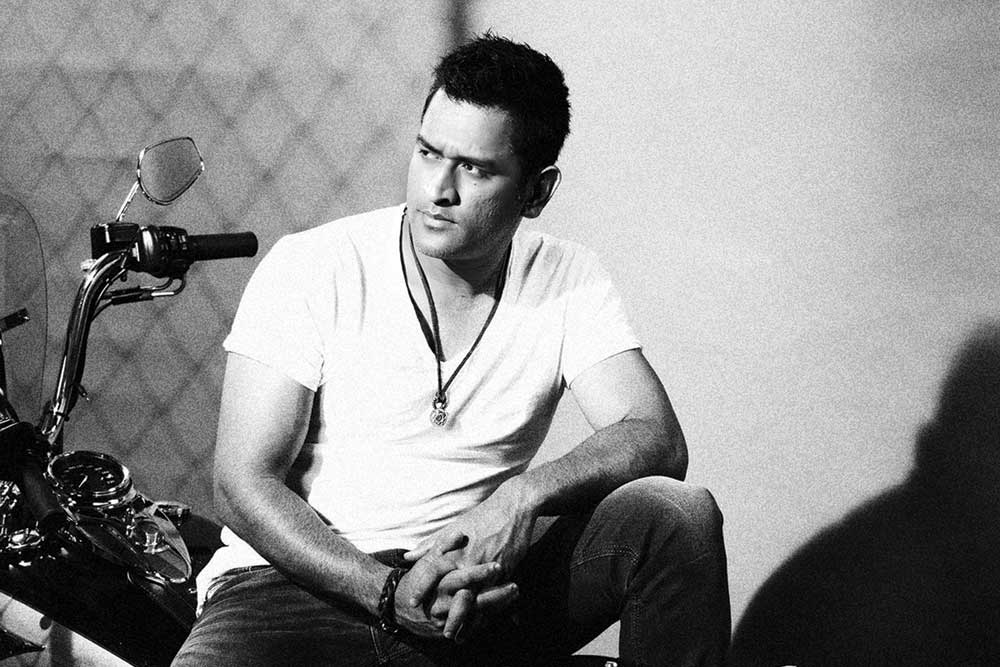 
It’s a scene a sports journalist from Chennai narrates. The Chennai Super Kings (CSK) man­ager calls Mahendra Singh Dhoni down from his room at Park Sheraton to meet a group of children sponsored by a brand he endorses. Clad in shorts and t-shirt, the CSK captain comes down, checks whether there is any media pres­ent (there isn’t), quickly wears his manager’s team jersey and stoops down, spending quality time talking to his little fans.

That’s Dhoni at ease, in the city he has rep­resented consistently for 10 of the 12 years it played in the Indian Premier League, with a constituency that appreciates him purely for his talent. There are no quotas, no clubs, no hi­erarchies, none of the pressures and perils that divide the players from the game.

For a country used to treating its cricketers like gods, Dhoni was a quiet oddity, always correct in public, invariably heroic on the cricket pitch but eternally distant. Unlike Sachin Tendulkar, an instant success, whom India adored from the moment he stepped onto the cricket field as a 16-year-old, curly mopped child genius, Dhoni came to Team India a young man who had, at 23, made friends with failure. He carried with him the salt of the earth of Ranchi, the smell of the ground at DAV Jawahar Vidya Mandir where he would practise, and the dust of the platforms of Kharag­pur station where he was a ticket collector in the Indian Railways.

And he had a personal imprimatur all his own, making him more than a mere cricketer, a cultural phenomenon. Says as­sociate professor at the Indian Institute of Technology, Bhilai, Sonal Jha: “The rise of MS Dhoni as a cultural icon parallels the emergence of a certain vernacular masculinity in popular culture in the late-2000s. The Indian cricketing landscape was hitherto represented by urban, middle-class cricketers, exem­plified by Sachin Tendulkar and Rahul Dravid. While Sourav Ganguly famously brought a new-found aggression to the Indian cricketing unit, it was with Dhoni that this aggression found a tempered and stable expression, also aligned with cricketing success.” A large swathe of the Indian population identified with him, she says. Not only was he a positive expression of a relatively marginalised, regional identity, he also made it look cool, and most significantly, masculine. There were several elements to this masculinity. The carefully styled but ever-changing hair, the sculpted body, the love for motorcycles. He carried himself distinctly, says University of Hyderabad’s Pramod K Nayar, like a David Beckham-type figure, in a conventional sport governed by serious norms, with his flamboyant hair and general demean­our. “There was an aura of freedom in self-expression in a sport notorious for its traditional white-flannelled appearance. To many, this was unusual, and appealing. The self-fashioning of Dhoni, changing over the years, became a national model for self-fashioning by the youth,” says Nayar.

Especially, small-town youth. He stood out even among them, having come two years after the young team under Ganguly that won the Natwest Trophy in England in 2002, leading to several hailing the awesome twosome—Chandigarh’s Yuvraj Singh and Allahabad’s Mohammad Kaif. Unlike another World Cup-winning captain and small-town hero before him, Kapil Dev, Dhoni was not merely a winner on the field but off the field as well. He reinvented himself, ironed out his perceived flaws, whether it was his personal grooming or his spoken English. He could fit in anywhere, but he chose to do so on his own terms.


Manas Ghosh has written in Locating Cultural Change: Theory, Method, Process how Dhoni transcended the idea of the ‘local lad’ epitomised by Sunil Gavaskar, referred to as Mumbai master, or Kapil Devi, called Haryana Hurricane. He was able to become an individual hero, who could interchangeably represent Team India, or Team CSK. Kapil Dev, the rustic Haryanvi boy of ‘Palmo­live da jawab nahin’, married into Delhi money and instantly be­came part of the big city elite, even picking up the ultimate posh game, golf. Despite his transnational appeal, Dhoni remains a Ranchi boy, going back home between games, remaining friends with his gang of boys, and even in his IPL home, Chen­nai, choosing to stay at the team hotel, Park Sheraton, rather than buying a home.

The biopic, MS Dhoni: The Untold Story, released in 2016, only added to Dhoni’s pop culture persona. By then India had won the World Cup under his captaincy, 28 years after Kapil Dev did so for the first time at Lord’s. The idea of his close friend and business part­ner Arun Pandey (portrayed as the loyal Chittu in the movie), it was directed by Neeraj Pandey, and did much to burnish his myth. His gritty struggle, as the son of a pump operator in a state where poli­tics in the only game being played, was transformed into an absorbing biopic, starring yet another small-town lad, Su­shant Singh Rajput, whose own arc from Patna to Mumbai’s big screen was a paral­lel to Dhoni’s cricketing success. With Ra­jput’s tragic death, the biopic has acquired a double iconicity.

In his death, Rajput has achieved the status Dhoni did with his cricket—as a self-made man from scratch, from a dif­ficult background, who becomes man of the masses. In Rajput’s death, there is also an echo of Dhoni’s own realism. In announcing his retirement through an Instagram video on August 16th, the song in the background is Sahir Ludhi­anvi’s classic from the 1976 Kabhie Kab­hie, ‘Main pal do pal ka shayar hoon’. Dhoni doesn’t shy away from the sad and even ugly moments in his career in the choice of images in the video, whether it was his duck upon ODI debut against Bangladesh or his effigies being burnt when Team In­dia lost the 2007 World Cup. The caption is short, to the point: ‘Thanks a lot for ur love and support throughout. From 1929 hrs consider me as retired.’ It’s interesting he should announce such a major life de­cision on Instagram where his daughter Ziva Singh Dhoni is quite the little star with 1.7 million followers.

Dhoni came to Team India at the height of the consumption of cricket as entertainment. Four years later, the entertainment quotient was upped with the introduction of the Indian Premier League and the potent mixture of big business, cinema and sport that it became. Amidst its cheerleaders, its after-parties and its glam­orous owners, Dhoni, by now a very rich man, seemed above seduction. Even his choice of wife was surprising. Brushing aside rumours, he married a young working girl, Sakshi Rawat, whom he met while she was interning at ITC Kolkata.

Historian Kaushik Bhaumik explains Dhoni’s appeal as the first new managerial captain, entrepreneurial in his approach towards Team India as a startup in New India. Says he: “Sourav Ganguly was more of a banker type. Dhoni is the new version of Kapil Dev for his times. Self-made man of the people, above all, young, open and entrepreneurial. Caste-wise, Kapil Dev repre­sented an OBC uplift.” Dhoni is more interesting—as a Rajput, he is originally from Uttarakhand, but his karmabhoomi is Ran­chi, Jharkhand, giving him a pan-Indian appeal, underlined by his captaincy of CSK, which made him Thala (Leader) Dhoni. His father’s employment in MECON India, a public sector un­dertaking, is yet another strand that broadens Dhoni’s appeal, enabling the majority of Indians to identify with him.

Add to that his love for the Territorial Army where he serves as a Lieutenant Colonel, and farming (on his 50-acre land near Ranchi), and you have a complete patriot who wears his coun­try’s colours on his sleeve. Yet, even in these hyper-nationalist times, his is not an aggressive obsession with the nation but an inclusive one, represented in his choice of teammates from across the country’s towns. Indeed, much before Prime Minister Narendra Modi articulated the idea of New India, Dhoni was em­bodying it: its geographical mobility, its enrepreneurial ability, its non-academic possibilities, and its non-religious new gods. There’s a scene in the movie, MS Dhoni, where a young Dhoni goes to a Durga Puja mela and asks for a poster of Sachin and his mother says: ‘Who is this god in blue and what is this mukut he is wearing?’ The poster is of Sachin, wearing a helmet.

IN THE CASE of all sportstars (and different from filmstars), says Nayar, we see them earning their laurels through their labours on the field, their injuries, frus­trations, failures. They are literally an embodiment of skill, training, pain, suffering. There is no sugar-coat­ing, no make-up: it is out there, sinews, blood, sweat, tears. Dhoni’s spectacular run chases, agility, running between wickets, among other things he did on the field, were not the ef­fects of cameras and lights: he did it in the flesh, Nayar points out. Dhoni, coming from where he is, did not present us a miracle: the overnight stardom or superstar. Instead, he gave us a marvel. “Miracles are associated with the divine and the supernatural, marvels with human wonders, and that is what Dhoni became for many,” he adds.

He was also able to cut through the mediation of journalists and speak to the audience directly in post-match prize ceremo­nies or press briefings. Rarely, if ever, did he give interviews, and preferred to manage his own media image. He used his body to communicate to the world. His hair alone is a marker of his stylistic progress, going from the ‘orange long hair’ that his hair­stylist Sapna Bhavnani inherited (and then Pakistan President Pervez Musharraf commented on) to the mohawk she gave him during a Champions League match in Ranchi in 2013 or the V-hawk he had in 2018.

And like all entertainers, almost everything he did was meme worthy, especially his cheeky comments behind the wickets as he instructed his bowlers to hit the mark and shouted at his fielders to look sharp. Like everything about him, his keeping and batting were unconventional, especially the trademark he­licopter shot. His endorsements, from motorcyle oil to Myntra. In 2019, Dhoni jumped up three ranks on Duff & Phelps’ Celeb­rity Brand Valuation report with a brand value of $41.2 million (Rs 308 crore) as compared to $26.9 million (Rs 201 crore) in 2018. According to Moneycontrol.com, he even topped Virat Kohli by one, with 44 brand campaigns in 2019. Dhoni is a smart investor as well. He has his own athleisure brand called SEVEN, and a gym venture, SportsFit World. He is also the co-owner of Chen­naiyin FC. The cricketer last year invested in Cars24 besides co-owning sports management firm Rhiti Sports.