BJP’s delivery optics and total politics trumped the game. Biren Singh now has a second chance to deliver on the promises of peace, infrastructure, connectivity, prosperity and accountability 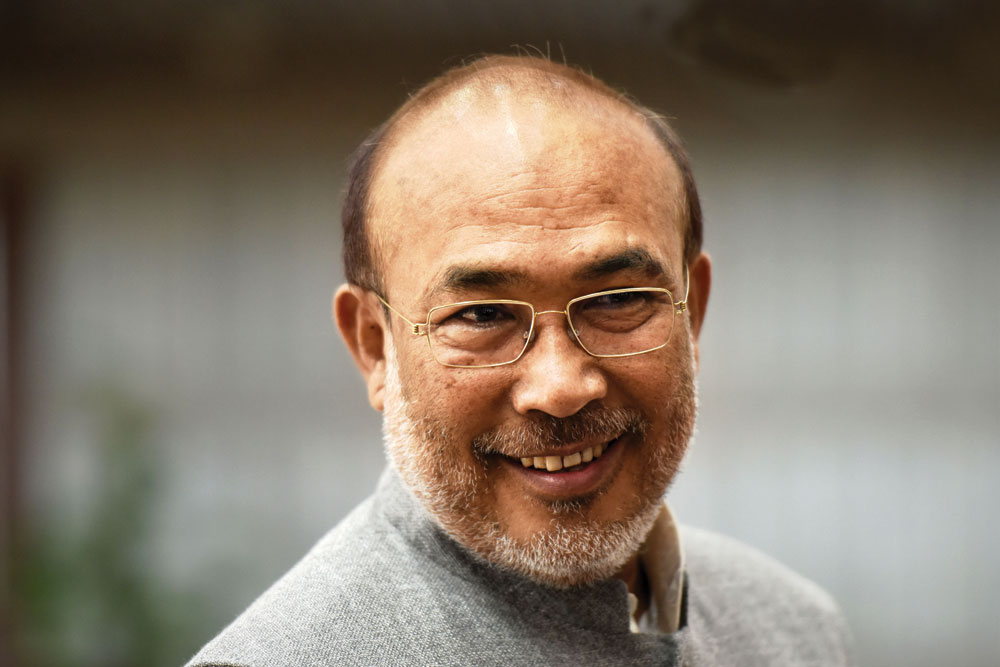 
Nongthombam Biren Singh, the incumbent chief minister of Manipur whom I dub the Mahabharat Man, has scored in the just-concluded Assembly election—and with him the leading edge of the Bharatiya Janata Party (BJP) in India’s gateway eastern state. The application of BJP’s ‘total-politics’ tied to Hindutva has again paid off for this man and the machinery backing him when the notions of peace and prosperity would not.

But Biren isn’t exactly home, and will probably not be dry. Malaise de Manipur will persist. It’s in Manipur’s DNA and the state’s foreseeable future. And this is how it has played out.

Biren first became chief minister of Manipur on March 15, 2017, ending the three-term run of Okram Ibobi Singh of Congress, whose administration witnessed massive human rights violations and atrocities by police, paramilitaries and Army adjuncts—all mostly papered over by the magic wand of the Armed Forces (Special Powers) Act, 1958. A protégé of Ibobi, Biren switched sides in late-2016, when the campaign for the previous Assembly election was in full flow. He quickly went from local BJP spokesperson to the party’s chief ministerial choice.

Ibobi’s desperate gambit to win Manipur for the fourth consecutive time for Congress—and for himself as chief minister—didn’t pay off. In the absence of allies, the 28 seats Congress won fell short of the 31 required for majority in the 60-member house. A spectacular burst of defections from Congress added to a late campaign surge by BJP (that fetched it a count of 21, from zero previously). The support of four from the National People’s Party (NPP), three from the Naga People’s Front (NPF) and the finessing of an independent MLA took the coalition to a slim majority.

There was a crying need for delivering on BJP’s election promises: peace, infrastructure, connectivity, prosperity, accountability—what Ibobi had been unable to provide. Moreover, Prime Minister Narendra Modi and his senior BJP colleagues had publicly placed their names to it all.

In practice, BJP’s optics over delivery and total politics trumped the game. By the time the incumbent BJP went into elections over two phases on February 28 and March 5, 2022, more defections from Congress had plumped up BJP’s MLA numbers to 30. Congress had dropped to 13, a slim shadow of its former self.

That shadow is now slimmer. BJP has won 32 seats, Congress a skeletal five. The real legacy of these elections will be that BJP and its local mascot beat Congress not because they did grand things for Manipur but because Congress and its cohorts had for decades done way less, and now lie emasculated.

Meanwhile, NPP has increased its count to seven, and NPF to five. If these one-time local allies play tough—as they did during the term of the previous Assembly—BJP will find it difficult to carry its mandate to term.

Another problem, of course, is that this mandate is, as ever, hard-wired by Manipur’s volatile ethno-geographical DNA. Of the 23,000-odd square kilometres that comprise Manipur, Imphal Valley is around 1,810 square kilometres. The remaining 92 or so per cent comprises hilly terrain.

The majority Meitei community comprises about 60 per cent of the population, and lives mainly in Imphal Valley—with its eponymous capital. The valley is surrounded by hills where live tribes, mainly Naga, the Kuki—the two largest non-Meitei groups in Manipur—and the Chin, who have sub-groups sometimes collectively known as the Zomi, or the Zo people. (‘Zomi’ is an etymologically flipped version of ‘Mizo’, as those who live in Mizoram are known—Mizoram is literally the land of the Zo people). On account of this demographic heft, the plains have 40 seats in Manipur’s Assembly, compared to 20 for the hills.

The Tangkhul, the second largest Naga tribe and among a dozen Naga tribes which have homelands mostly in northern Manipur—who also count handsomely among major Naga rebel factions in peace talks with the Government of India—have for long contended that the non-Meitei and by extension, the Valley, have since 1972 taken the cream of both development and infrastructure funds, and opportunities for jobs in government. That was the year Manipur was administratively upgraded from a Union territory governed directly by the Central government to a state.

Besides Manipur-based Naga tribes, which claim majority in the mineral-rich hill districts, the southern and eastern ring of hills contain mainly Kuki and Zomi peoples. Ibobi had consistently driven wider the valley-hills divide. “There is hardly anything that all three demand together as Manipuris,” a senior officer of the Intelligence Bureau once told me in Imphal.

The natural, ongoing suspicion between the ‘hills’ and ‘plains’ people is also separated by religion—the Tangkhul and other tribes are overwhelmingly Baptist besides being overwhelmingly Christian, the Meitei largely Hindu-Vaishnav—language, and specific ethnic identities. Indeed, much more so now with increasing identification by many of the ‘Hindu’ nature of Manipur as a direct and overt push by agencies of the Rashtriya Swayamsevak Sangh and only marginally less overtly by BJP.

To his credit, Biren did try to bridge the divide immediately. He went about his early days as his new role model Narendra Modi might: a blitz of inclusive and positive, if triumphalist, optics and promises and rhetoric to last a generation. Within weeks of his appointment as chief minister, Biren travelled in a motorcade to Ukhrul—enemy country for his predecessor—for the warmest welcome in 15 years accorded to that office. It helped that the local BJP was still riding on the coattails of the Framework Agreement for peace between the largest Naga rebel group, National Socialist Council of Nagalim (Isak-Muivah) and the BJP-led Central government. Biren announced the very development projects that Ibobi could not.

But there were riders from his Naga hosts. Among these was the request that his government acknowledge the ‘legitimate right’ of Nagas to integrate contiguous Naga homelands that emotionally bind the state of Nagaland and the northern aspect of Manipur; rescind the new districts created at the end of Ibobi’s tenure to territorially hobble the Nagas; and unequivocally support the Framework Agreement. Biren could hardly agree, because the mere suggestion of ceding territory would lead to a firestorm of protest in the Valley, the traditional Meitei redoubt—and the Sangh/BJP’s emotional and electoral target audience. It’s also a reason why the Framework Agreement remains inconclusive: BJP satraps wouldn’t sacrifice a plum vote bank.

Short on delivery, Biren instead adopted the route of majoritarian mythology. In early 2018, he announced at a political rally in Gujarat’s Madhavpura village that, in the time of Lord Krishna, Northeast India was a single entity. That, Lord Krishna “made them part of India” by marrying the princess Rukmini, whom he alluded was from Arunachal Pradesh. Many nationalists accused him of selling Manipur’s soul, the same as they had other pro-Hindu campaigners. Another myth is that the Pandav ace-archer Arjun had a son, Babruvahan, with the princess Chitrangada from ‘Manipur’.

The men of Mahabharat were ultimately proven to be hollow. Biren now has a second chance to prove he is not.