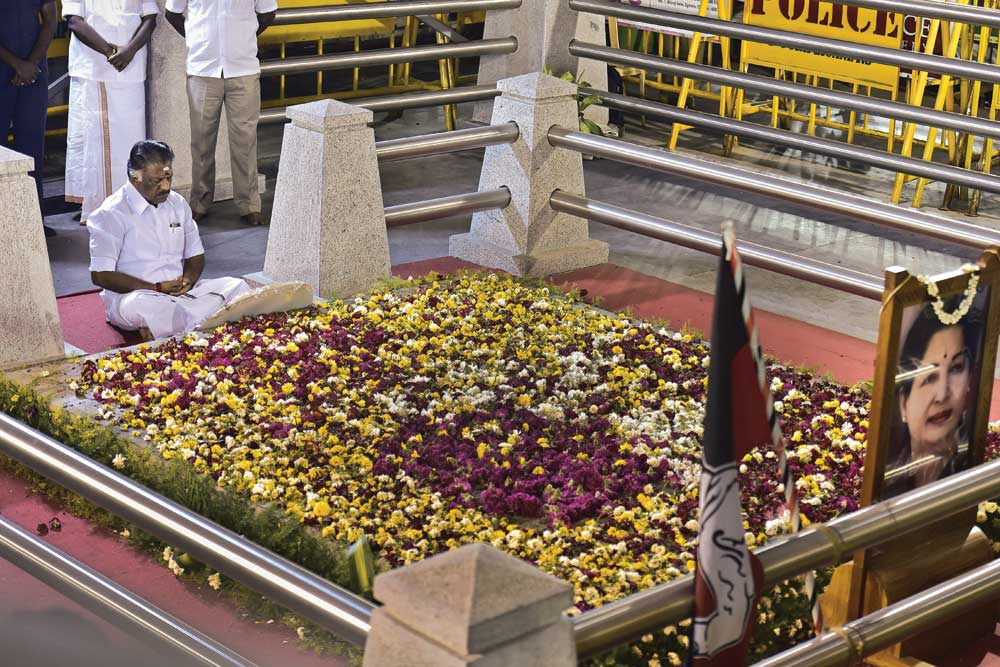 HE SAT LIKE the Buddha, cross-legged for nearly an hour, late in the night on February 7th, at the memorial of his dear Amma, the one and only ‘thalaivi’, the supreme leader, on Chennai’s Marina Beach, knowing full well the frantic calculations that were going on all around him for the seat he had occupied and relinquished more than twice. The first two resignations were willingly made to hand back charge of the burden he had borne during his revered leader’s absence. After her demise, he was called upon again to don her mantle, now for real, and he had accepted it with humility and dignity. As the new leader of Tamil Nadu, he had performed his duties with diligence. He’d made trips to Delhi to get permission for an ordinance to bypass the judicial ban on Jallikattu, a traditional bull sport, winning the affection and admiration of the Tamil people and of rival parties as well. He’d gone to Hyderabad for a congenial meeting on the sharing of waters, and promised to visit Alanganallur near Madurai for the occasion of the sport’s revival there.

O Panneerselvam was surveying the ravages of an oil spill along the coast at Ennore when he was called to Poes Garden, the residence of J Jayalalithaa (1948-2016), which the late leader’s long-time associate and friend VK Sasikala had made hers, and was told that Chinnamma—as the latter was now called—was going to be elected Chief Minister in his place by legislators of the All India Anna Dravida Munnetra Kazhagam (AIADMK). But why now, at a time when the government was dealing with so many issues? The signatures of MLAs had already been collected, he was told, and he had to abdicate again.

It was a slap in the face. He was never a rebel in his political career, and yet the humiliation was hard to bear. Traumatised by deceit and with no friend to unload his woes, he had decided to go to Amma. She would surely lend him an ear. He was in deep meditation at her burial spot, unaware of the roar of the sea. He had done no wrong and Amma knew it. When he opened his eyes after an hour, he was a changed man. Teary, he prostrated himself full length on the ground, just as he would when she was alive.

Did he receive a message from her? Did she tell him, “You were my trusted deputy, do not let the party go to the wolves?” “Raise your voice?”

He did. He emerged from the memorial like a mythical soldier raised from the dead. “I wish to reveal,” he told the waiting press, “that my resignation from the Chief Minister’s post on Sunday in favour of Sasikala was forced.” He said he was not informed in advance of the AIADMK legislators’ decision to elect her as their leader in the Assembly, nor was he kept in the loop about the plan to assume the responsibility that had been his. “I am revealing the truth now motivated by the command I received from Amma’s soul. I shall [therefore] fight till the end, standing alone.”

That was a signal to the Tamil masses, always sentimental about the wishes of the dead, about commitment and loyalty. It reminded one of what his mentor Jayalalithaa had told party cadres after her mentor MG Ramachandran (1917-1987) passed away. She told them that when she had been planning to quit politics, it was MGR who, placing her palm on the picture of his mother Sathya, had made her vow never to do this. By suggesting that she was bound to follow in MGR’s footsteps because of this promise made to him, she ensured that her active participation in Tamil politics was not seen as mere political ambition.

Now, it seemed, her chosen deputy had made a similar promise to her at her grave. That Panneerselvam could not be faulted on that account, the people knew. The man was surely not power hungry. They know how he, like Bharata awaiting Rama’s return, had waited for Amma to come back, refusing to occupy the Chief Minister’s chair she had used.

Even the party’s detractors were outraged when it came to light that Sasikala, who was general secretary of the AIADMK, wanted to replace him as Tamil Nadu’s Chief Minister. After all, he was experienced in governance, twice chosen by Jayalalithaa herself to take charge of the state when she faced legal problems and had to step down from office. After her death, he was duly asked to take oath as the next Chief Minister.

Panneerselvam was told that Chinnamma— as Sasikala was now called—was going to be elected Chief Minister in his place. It was a slap in the face. He was never a rebel in his political career, and yet the humiliation was too hard to bear

Sasikala and her entourage call Panneerselvam an ingrate, recalling his past. A graduate and the son of a poor farmer from the Thevar community, he was a humble man, known for his modesty. He was in the good books of Sasikala’s nephew Dinakaran, MP, who had been impressed by his sincere work when he contested an election in the Periyakulam constituency. It was on his recommendation, it is said, that Jayalalithaa selected Panneerselvam. When the Supreme Court on September 21st, 2001, gave its verdict that ‘the appointment of Jayalalithaa as chief minister of Tamil Nadu on May 14th was unconstitutional and void’ (she had been indicted and sentenced to imprisonment for more than two years in the TANSI case, so she could not contest an election but had still been sworn in as Chief Minister), to the total shock of everyone, she appointed a first-time member of the Assembly, Panneerselvam. Her trust in him was such that she called upon him again to take charge when she was convicted in 2014 by a Karnataka special court and had to step down.

Sasikala, however, was well versed with the machinations of caste politics, having been a close associate of Jayalalithaa and having played a large role in selecting party candidates in recent times. AIADMK members of the legislature might have felt obliged to project her as the supreme leader of not only the party but also the legislature. While many MLAs worried about what they saw as Panneerselvam’s lack of charisma, they might also have been uncomfortable with his sudden popularity.

INDEED, THE POLITICAL story of Tamil Nadu has all the elements of a blockbuster film, where ironies and larger-than-life characters abound: Periyar, a Kannada speaker who stirred up notions of Tamil self-respect and regional pride, yet dismissed Tamil as a ‘barbaric’ language; the matinee idol MGR, a Malayalee born in Sri Lanka who became Tamil Nadu’s most popular mass leader; and Jayalalithaa, a Brahmin from Karnataka and a former actor who became the leader of an AIADMK that had its roots in a movement that denounced Brahmins, and went on to achieve iconic stature, elected four times as Chief Minister of the state. The drama was only heightened by the theatrics of the two dominant regional parties, the AIADMK and the DMK, one led in the past few decades by Jayalalithaa and the other by M Karunanidhi. One, a former actor, the other a film scriptwriter, both playing out a rivalry, the likes of which you would never see elsewhere. The feud was of epic dimensions, and either party’s leader had to be glorified to supernatural levels just to keep the cadres motivated. If Jayalalithaa became Amma, the universal mother, Karunanidhi became ‘thamizhina thalaivar’, leader of all Tamils.

Orphaned by the death of their Amma, AIADMK legislators are now caught in a web from which they cannot extricate themselves. They are desperate for a new icon to galvanise the grieving cadres, many of whom are wary of the people of Mannargudi to which Sasikala belongs—who swarm around her. Those who owe their allegiance to her and are anxious to stay in power for the remaining four-and-a-half years of the Assembly’s term are keen to prop her up as the one who was closest to their revered leader for 30 years, a fact they hope will make her acceptable as a leader who would know how best to follow in Amma’s footsteps. They know, of course, that it would be difficult to wipe out the distrust party cadres have towards her, convinced as many are that Sasikala and her relatives are to blame for the legal troubles and jail terms that Amma had to suffer. They also know the reason behind the move of MLAs to rally around Sasikala.

At the party headquarters in Avvai Shanmugam Salai, there are many voices of dissent, even as many in desperation throng the gates of Amma’s niece Deepa Jayakumar at Sivagyanam Street, T Nagar, in the hope of creating another political icon from the ‘raththaththin raththam’ (blood of blood) of their departed leader.

To the public at large, however, Panneerselvam’s protest at the ‘injustice’ done unto him, even if a trifle late, appears to be more than welcome. To the former Chief Minister’s astonishment, there are sporadic protests all over Tamil Nadu against the switchover of power. The national English media seems to be on his side. Even opposition leaders, oddly, seem to be batting for him.

It was the early signs of this upsurge in his favour that sent him to Amma’s memorial, asking for her grace, for deliverance from the dishonour he’d suffered. It was an act in the true Dravidian spirit of maanam—righteousness.

It was a potent symbol, one that has always been a vital part of Tamil culture, with its oral and visual folklore ingrained in people’s psyche, traceable all way back to the Sangam poetry of the pre-Christian era. Songs of war and valour, of honour and commitment, of love and betrayal. At the heart of the Dravidian version of Tamilness lies the notion of honour. Of maanam. It binds people within an ideological matrix. The concept, which encompasses one’s experience of righteousness, has served to strengthen the self-image of Tamils. It assures cohesion, promises nobility. It is an ‘ethical imperative’, and any Tamilian of honour is expected to devote himself to his culture, be ready for sacrifices to uphold it.

The 134 AIADMK members of the Assembly who believe they can create a facsimile version of a leader who was larger than life, on whose charisma alone the party survived, do not realise the massive social churn that is happening in the state. The recent congregation of people at Marina Beach was not only spontaneous, it was also unprecedented. Young and old, they gathered, spitting fury in the name of a ban on a sport many of them had not seen. Their vehemence had its own story to tell. The death of the icon seemed to have unleashed all the pent-up frustrations that had been contained for long under authoritarian rule. The projection of a supreme leader will give rise to authoritarian leadership, they know.

But the very protest, remember, was a cry for maanam —to preserve the Tamil’s right to decide. Panneerselvam seems to have joined the churn.