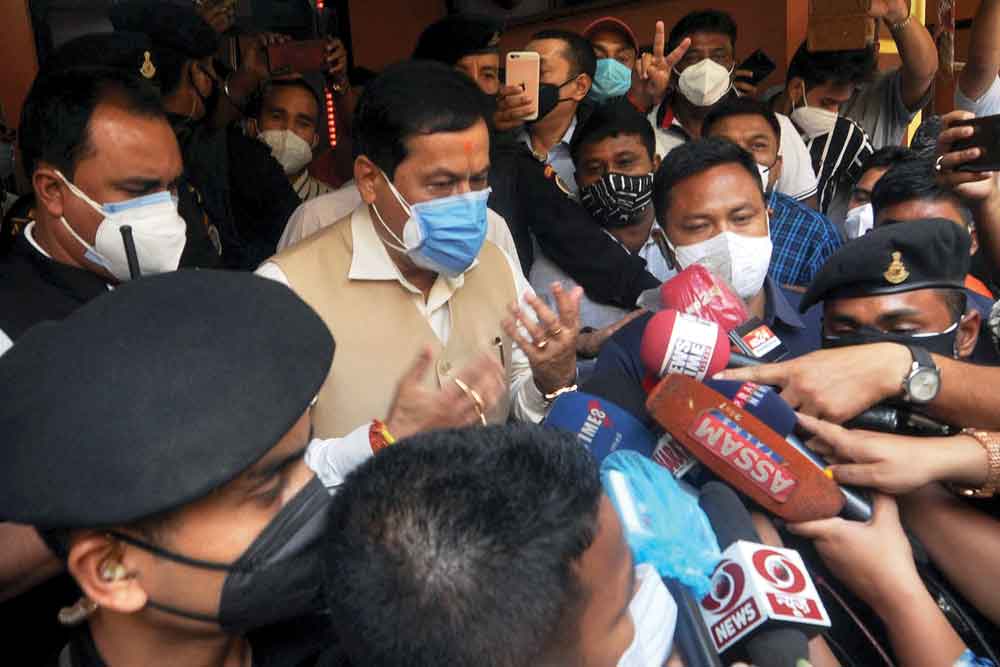 
FOR A FEW days after the Assembly election drew to a close in Assam early last month, the opposition Mahajot led by Congress plunged headlong into an unusual exercise of stationing the contesting candidates at far-off locations. The objective was to prevent them from being poached by the Bharatiya Janata Party (BJP). The assumption among many leaders of the camp was that the verdict would either throw up a hung Assembly or a win by an extremely narrow margin for the alliance. The names of some ‘vulnerable candidates’ were supposedly compiled and their activities put under the scanner.

The Mahajot’s assessment was proved wrong as the National Democratic Alliance (NDA) romped home comfortably, with 75 seats out of a total of 126 in the Assembly, which was 12 seats fewer than the tally in the previous election. BJP won in 60 constituencies while its allies—the Asom Gana Parishad (AGP) and the United People’s Party Liberal (UPPL)—secured victories in nine and six seats respectively. Congress could win 29, which was only three more than its tally in 2016, of the 50 seats the alliance secured. NDA’s victory is the second consecutive win for a non-Congress coalition in the state which has scripted a new chapter in the political history of Assam.

The scenario in Assam was hazy till a month ahead of the election, unlike any of the earlier Assembly polls in the state. There was hardly any doubt that BJP’s shrill claims of securing more than 100 seats would be unachievable. However, the writing was on the wall as the exercise drew to a close, which was reflected in the exit polls. BJP had correctly gauged that the Narendra Modi magic wouldn’t sway the masses this time round, but there weren’t many reasons for the party to be disheartened. A large section of the leaders was convinced that neither the agitation against the Citizenship (Amendment) Act 2019 (CAA), which had engulfed large parts of the state, nor the issues raised by the opposition parties would have a decisive impact on the mind of voters. Above all, BJP was better prepared with its poll strategy that began to be executed months in advance.

“We had begun to work for the Assembly polls on a well-crafted strategy even before the General Election two years ago. Our primary focus was on the mobilisation of workers and all functionaries of the panchayats and autonomous councils. There was coordination at every level to ensure the party’s victory with the guidance of the central leadership. In 2016, the emphasis was upon ‘pariborton’ (change) while we stressed the achievements of the government this time round,” explained Assam BJP general secretary Phani Sarma. “We were confident of a landslide victory despite the anti-CAA agitation in many zones of the state.”

The organisational aspects aside, funds play a crucial role in all Indian elections and Assam was no exception. And this was one area where BJP had beaten its rivals hands down during the Assembly polls. As it seems, the mechanism for the ‘smooth flow’ of funds had been firmed up by the party’s managers months ahead of the election. Not surprisingly, a common refrain among the opposition parties was that BJP was ‘flush with funds’, which was a major disadvantage for Congress and most of its allies reeling under a severe financial crunch. A former Congress minister described the situation as 90:10, meaning his party was able to spend only one-tenth of the total amount splashed by BJP.


An efficient organisation at the grassroots and deft management of finances combined with other factors to ensure NDA’s victory. The single-biggest factor was Congress’ decision to tie up with the All India United Democratic Front (AIUDF) which helped BJP consolidate the Hindu vote in a vast swathe of the state. None of the 31 Muslim members elected to the Assembly belongs to NDA. AIUDF president Badruddin Ajmal’s repeated vilification by NDA leaders as the messiah of illegal Muslim immigrants seemed to have struck a chord with a large section of the electorate already anxious of being overwhelmed by Bangladeshi nationals. BJP leaders continuously thundered that the battle was between “65 and 35 per cent” of the population (Muslims constitute 34 per cent in Assam) in a bid to polarise voters which yielded dividends. Protestors against CAA in most of the constituencies in the eastern districts that also constitute the Assamese heartland were convinced that the real danger looming on the horizon was Muslim infiltrators and not the Hindus.

The impact was also evident on the fortune of two new parties—the Raijor Dal and the Asom Jatiya Parishad (AJP)—born of the anti-CAA movement. The two parties had made a pre-poll alliance to prevent the split of votes among themselves. That did not help as only a single seat was won by incarcerated Rajior Dal president Akhil Gogoi from Sivasagar. But the alliance indirectly helped BJP in snatching votes that would have gone to Congress in several constituencies, particularly in eastern Assam. Congress general secretary in charge of Assam, Jitendra Singh, told the media that the twin parties ruined Congress’ prospects in 10 seats across the state. The results revealed that BJP secured victories in seven constituencies with a margin of less than 5,000 votes.

BJP was uneasy with the tea tribe communities that have a deciding role in as many as 40 constituencies in eastern Assam on both the north and south banks of the Brahmaputra river. They had traditionally been a Congress bastion which the party had sought to retain through a high-decibel campaign by senior leaders from the capital. These communities had ample reason to be peeved with BJP—their demand for inclusion in the Scheduled Tribe (ST) category has been hanging fire for years in the same way that the party’s promise of increasing their daily wages in the tea gardens had remained unfulfilled. Realising the danger, the BJP-led state government unleashed many welfare schemes aimed at retaining the support of the tea tribe, such as the supply of free rice, financial aid of Rs 12,000 to every pregnant woman and reservation of seats in medical and engineering institutes for their children. On infrastructure development, 199 tea estates were identified where Rs 1,400 crore was spent on roads and schools. The government also hiked the daily wages from Rs 167 to Rs 217 but failed to implement it after the garden owners challenged the order in the Gauhati High Court. BJP and its allies secured victories in 33 of these seats.

The organisational aspects aside, funds play a crucial role in all Indian elections and Assam was no exception. And this was one area where BJP had beaten its rivals hands down during the Assembly polls

THE BLITZKRIEG OF such schemes was extended to cover a larger segment of the electorate. Several direct and indirect cash benefit schemes such as Arunodoi and Chah Bagisa Dhan Puraskar Mela, targeting different sections of the populace, began to be launched since January. Almost a dozen projects with an estimated budget of more than Rs 6,000 crore were executed, resulting in the creation of around 90 lakh beneficiaries. Congress also came up with five poll guarantees—generating five lakh jobs, providing a monthly income support of Rs 2,000 to all housewives, increasing the daily wage of tea garden workers to Rs 365, granting 200 units of free electricity to every household, and passing a resolution in the Assembly against implementation of the CAA in Assam—instead of ‘promises’ based on the party’s campaign model during the Assembly polls in Chhattisgarh. But it hardly stood any chance of swaying voters. As sociologist Chandan Kumar Sarma said, “Large sections of people were concerned more about the immediate benefits from the schemes unveiled by BJP than any long-term gains. The party knew where and how to strike to derive the maximum mileage.”

The election results offer insightful conclusions on the political landscape in Assam. BJP increased its vote share from 29.5 to 33.2 per cent, although it could not improve on its score in the previous Assembly election. This certainly means a saturation point that the party has reached in the state, underscoring the importance of its alliance with AGP and UPPL which would have to be sustained on a long-term basis. Both parties have formidable opponents on their home turf and retention of their support bases would depend more on fulfilling the poll commitments than rhetoric. Moreover, the poll verdict delivered the unambiguous message that the CAA may not be as beneficial to BJP as envisioned earlier. And finally, the Assam polls have dealt a decisive blow to Congress in terms of its image as a secular party and its vote share that was marginally reduced.