When the monster rains came, like any other place faced with the sudden ferocity of nature, Kerala was not prepared, and as the water level rose to fatal heights there were not enough streets or shelters left for the displaced and the dying to keep them safe. The water has begun to recede, but not the woes of a shattered people 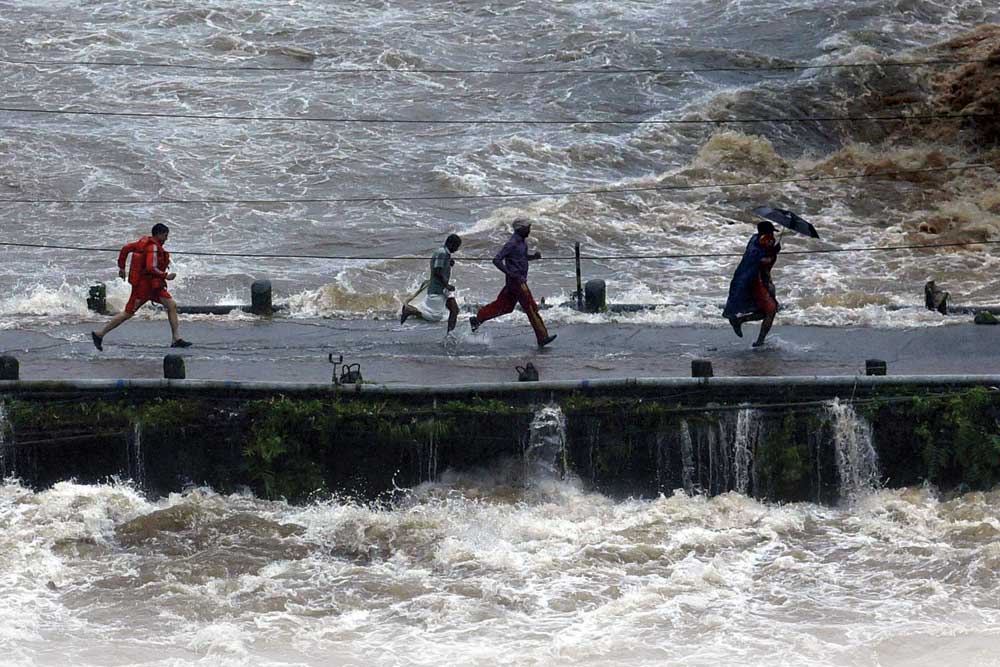 In Pathanamthitta district of Kerala, one of the worst affected regions in the biggest flood to hit the southern Indian state in almost a century, 72-year-old Chandrasekharan Achari died for want of medical assistance. He couldn’t be taken to the local hospital two kilometres from home because the water had risen so high that no vehicle could ferry him there. The man’s family couldn’t appeal for help to friends and authorities because batteries in their mobile phones had died as there had been no power supply for days.

Achari had complained of chest pain around 9 pm a few nights after the deluge began to wreak havoc in the state amid incessant rains. It was just past midnight when he died, a loss the family had to endure in circumstances that could not have been more grievous.

Similar was the plight of Mariamma from the same district who passed away because her oxygen cylinder ran out and couldn’t be refilled rightaway. One-year-old infant Ayush died on his way to a hospital in neighbouring Kollam district because his parents couldn’t get him to a hospital on time; road transport had been disrupted. At Pandanad in Chengannur area that falls in the tourist hot spot of Alappuzha, rescuers who braved the ferocity of the Pamba river broke open a home only to find a mother and child lying dead in an embrace. Near Kochi in Ernakulam district, in Angamaly and neighbouring Kaladi, the birthplace of Adi Shankaracharya, carcasses of cattle, pigs and dogs could be seen afloat in the water, their stench making rescue and relief work all the more difficult. In Adimali of Idukki district, teenager Niya lay buried under five feet of mud brought down by a landslide. Many parts of the scenic Wayanad on the Western Ghats remained isolated, with its people—mostly tribals—forced to survive without a single meal for days until rescue squads of volunteers arrived with food and medicines. In Kozhikode, people found the bodies of their relatives floating up as the water began to recede. In Aluva near Cochin International Airport, former Microsoft director and entrepreneur James Joseph watched helplessly as his apartment complex stayed inundated for more than a week, while he and his family of four survived on dry fruits and stocked-up water with only candles for light in his flat at night. He was shocked to find venomous snakes making their way up 11 floors to the terrace of the building. In Kannur, a teenaged survivor is yet to come to terms with the fury of the deadly landslide in Kottiyoor locality that he came face to face with. In Kumarakom, Vaikom and Changanassery, all in Kottayam district, the extent of devastation and disruption has left locals numb with despair. In Palakkad, Malappuram, Thrissur and other districts where people had to flee their homes to the safety of shelters, survivors say death was only few breaths away. In the low-lying Kuttanad region that stretches across multiple districts and has always been vulnerable to floods, the misery this time around was unspeakable.

Marooned and stranded, the rich and poor alike, thousands of Malayalis from most of the state’s 14 districts waited for relief while the unlucky ones died before they could be rescued by either teams of the National Disaster Response Force (NDRF), Navy, Army and Air Force or groups of local volunteers, mostly seasoned fishermen who knew the lay of the land and ventured out with their boats to save as many people as they could.

There are several heart-rending photographs that have emerged from Kerala—of human bodies, flotsam of plastic waste, carcasses of cattle that couldn’t swim to safety because they were tied up in stables, and of survivors, including pets abandoned by owners in a hurry to save their own lives. A picture that lifts one’s spirits is that of a rescue worker who got down on all fours in the water to offer his back as a step for women and the elderly to climb onto a boat. KP Jaisal became an enduring image of the dedication of rescue workers, whose efforts were aided by the participation of ordinary people going to extraordinary lengths to help those in need.

No tragedy, be it an earthquake, a cyclone or a flood, can adequately be quantified in monetary terms, though a variety of figures have been cited. The losses have been immeasurable— the loved ones lost, the homes, and everything that people took for granted as their own, from assets acquired with hard-earned money to their sense of safety under their own roofs, all of it was swept away in a matter of hours.

Notwithstanding the tireless efforts of the armed forces, Central and state agencies in steering relief and rescue operations, natural disasters leave in their wake the kind of destruction from which a return to normalcy can be slow and traumatic. With their lives thrown out of gear, millions of people in Kerala face the daunting task of rebuilding everything from scratch. While the widespread use of social media and mobile technology helped disseminate information on distress and coordinate rescue efforts, it also played a negative role in some parts, with fake news being put out asking people to stop donating money for relief operations, often accompanied by unseemly barbs aimed at Malayalis for their lifestyle and culture.

Similar natural disasters worldwide offer lessons. Primary among them is that offsetting financial losses is just one aspect of any rehabilitation exercise. There is no miracle cure for the agony wrought by such a calamity, no matter how resilient and spirited people are. It is commendable that the people of Kerala did not let themselves languish in self-pity, but came instantly together to rebuild what could be rebuilt and get essentials such as food, clothes, medicines and cash across to those afflicted.

Rescuers persisted with their mission despite being rebuked by men and women in denial, many of them too shocked out of their usual senses—their dreams having turned into nightmares— to understand that leaving their homes for shelters was in their own interest. Which is another reason that relief and rescue teams deserve praise and all-round gratitude: they worked against physical as well as psychological odds. The state leadership, too, refused to be overwhelmed by the disaster, and the government worked hard to meet its challenges. The coordination between various agencies was smooth and exemplary, to say the least. Without doubt, they all did their best, and this offers Kerala the assurance that the state’s rehabilitation programme shall be managed well in the days and weeks ahead.

Unfortunately, the same cannot be said with as much confidence about the environmental imbalances that played a slow but certain role in the disaster. While nature’s fury took its toll, man-made aspects of it cannot be overlooked. It is insensitive to point retrospective fingers in the aftermath of such a tragedy, but it is true that warnings by ecologists have not satisfactorily been heeded and man’s greed in exploiting natural resources for his commercial ends has ended up worsening the risks posed to millions. This is so not just in Kerala where a loss of the Western Ghats forest cover, excessive use of concrete for rapid urbanisation and other interventions in the ecosystem have altered water drainage patterns and put people at the peril of their own actions, but across the country and in large parts of the world. The dangers of injudicious growth need to be recognised for what they are, and ecological warnings have to get beyond the confines of seminar rooms.

The ecosystem of the Western Ghats, which is home to much flora and fauna, has long been identified as fragile. Various studies in the past had pointed at the need to slow down construction activity along these hills that border Kerala on its east. The Madhav Gadgil Committee Report of 2011, for example, had recommended a ban on various new industrial and mining activities. It also called for strict regulation of illegal development work and the inclusion of local communities and panchayats in efforts to conserve the environment. Gadgil, the ecologist who headed the Western Ghats Ecology Expert Panel that produced the report, has said that a significant part of the problem in Kerala is ‘man- made’. Conceding that it was unusually high rainfall that caused this flood disaster, he has maintained that the damage could have been contained to an extent had his suggestions—like that of another commission—been implemented and stricter environmental laws brought in.

It is a habit, however, for people to learn from their mistakes the hard way.

Yes, Kerala this past fortnight has been a case study for masterly rescue operations under extreme duress. But what unfolded in this state also offers lessons in humility. Leave nature alone.